Today’s Saturday morning C ride featured nice weather conditions (except for the headwinds from the north), an unpleasant encounter at Pulaski Park and, highlighted the challenges of keeping track of everyone when leading larger groups.

The plan for today’s NCC Saturday morning C ride was to head up into Leverett and Shutesbury to cover some familiar ground and introduce areas that this year’s C ride hasn’t traveled yet.

Wind has been a fairly constant companion this year and today was no exception.

The ride seemed to move along comfortably as we made our way through downtown, and then onto Glendale and Pomeroy Meadow before starting the climbs leading to the first regroup spot by the Outlook Farm. 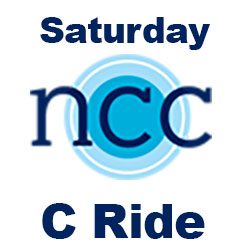 The part of Westfield we entered is known as Wyben and has been known for its numerous apple orchards in the past, and while there’s still plenty orchards in the area, as elsewhere housing development steadily claims old farmland.

The May 7th version of NCC’s SMR was greeted with overcast skies, cool temperatures, and strong winds out of the NE. It was pretty clear that the 8 of us that started were going to have a rough time of it as we headed across the river toward Leverett.

The climb up the Chesterfield wall is never easy, and today was no exception. At the one hour mark we had only covered about 13 miles but the tempo had already changed.

Apparently, there was a lot of cycling activity, both locally (D2R2 gravel) and not so local (Mt. Washington hill climb) that happened this past Saturday. This seemed to have had a more noticeable effect on the B ride as, I believe, they only had five riders. The C ride wasn’t so affected as it started out with eleven.