Even as the changing season makes heading out early for a brisk road ride less appealing, the realization that there is only a short time window until forest paths are choked with snow and then too soggy to ride means that I’ve been feeling “the call of the woods” rather strongly lately, and doing a lot of conventional gravel, gravel bike singletrack, and taking the concept of “underbiking” to its absurd extreme with “what possessed you to think that could be done on wheels?” routings.

In an attempt to drag others into my delusions of bikeability, I planned what I hoped was a moderate path through the Ashley Reservoir and Bear Hole Watershed, aiming for an 11 am meeting at the Elks Lodge, and planning to set out “not too much after 9” to ride there from Northampton.

Of course, there are plans and then there is reality.  9:30 saw me putting bottles on the bike, and I was just on the verge of setting out when Jennifer let me know that there was apparently going to be a charity walk event going on in the Ashley.  Ride re-planning and riding oneself fourteen or so miles to the meeting point don’t combine very well, but we finally settled on keeping the Elks Lodge as the primary meeting point, with Holyoke Community College as a backup.  (Incidentally, the Elks have figured out that they’re the de-facto parking for the Ashley and decided to run with it in that they take discretionary donations to their causes.)   Naively I hoped that if I took County Road all the way to 202 and rode that East I might avoid the climb I knew of on Apremont Highway, but that was just silly – I ended up climbing the hill anyway, and occupying the right slow vehicle lane to do so.  Next time I’ll just take Apremont Highway and appreciate that while exiting westbound from the top of the Ashley to Apremont Highway is a bit tense, going Eastbound from Apremont Highway to the Ashley is actually fine, with a decent shoulder the whole way.   Ultimately I arrived at the Ashley Reservoir entrance without incident, and slowed to pass those finishing the charity walk event.  The gate at the end of Whitney Ave had an inflated event gate over it, a timing mat, etc – feeling a bit silly I dismounted and walked my bike out.

Looking around the parking lot I received an email from Kent, a new NCC member joining a group ride for his first time ever, and a moment later encountered him in person, raising the question: have we ever had a club member make their first appearance in a gravel rather than paved club ride?  A few minutes later Jennifer arrived at the Elks south parking lot, completing our group of known attendees, so so to avoid conflict with the tail end  of the charity walk we opted to enter the Ashley from Lower Westfield Road and head straight to the Bear Hole, leaving really appreciating the Ashley’s gravel causeway paths for the end of the ride. 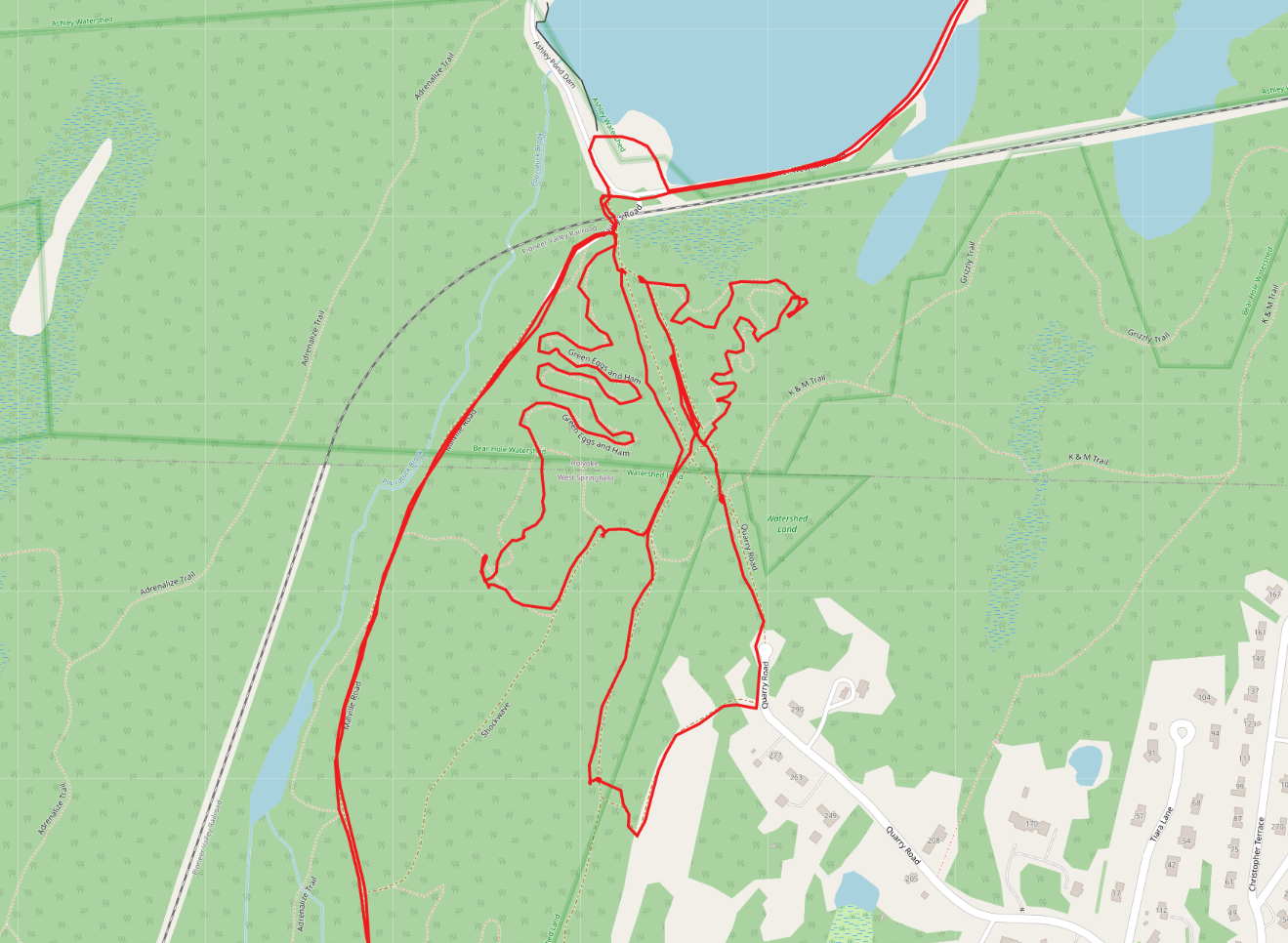 Our exploration of the part of the Bear Hole Watershed north of the Mass Pike (I90) began with portaging our bikes over the railroad tracks from the south end of the Ashley Reservoir and a small zone of broke beer bottle glass.  I took a couple of wrong turns but we soon settled on a path south and then east through a brush-hogged field to Quarry Road where we re-entered the watershed and attempted to find the start of the “Birds of Prey” trail that had been recommended by a friend.

That mostly turned into a group exercise in “does anyone see where the trail goes next?” with mixed success: 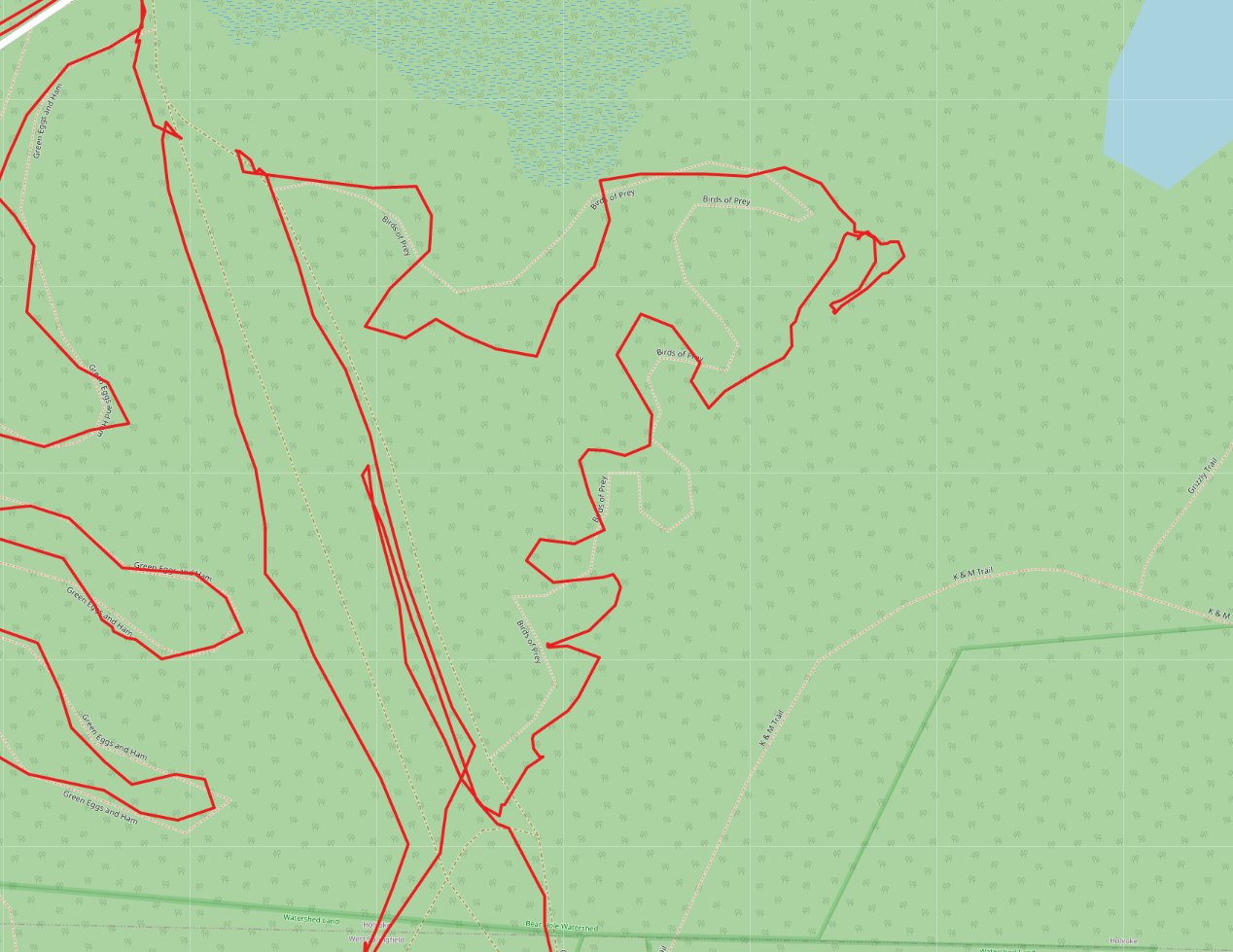 After which we headed south again on one of the more roadlike trails, and attempted to find the entrance to “Green Eggs and Ham” remembered from my previous visit, but once again complicated by a confusing sign for something else – “Maisy’s Trail” or the like?  I don’t exactly remember. 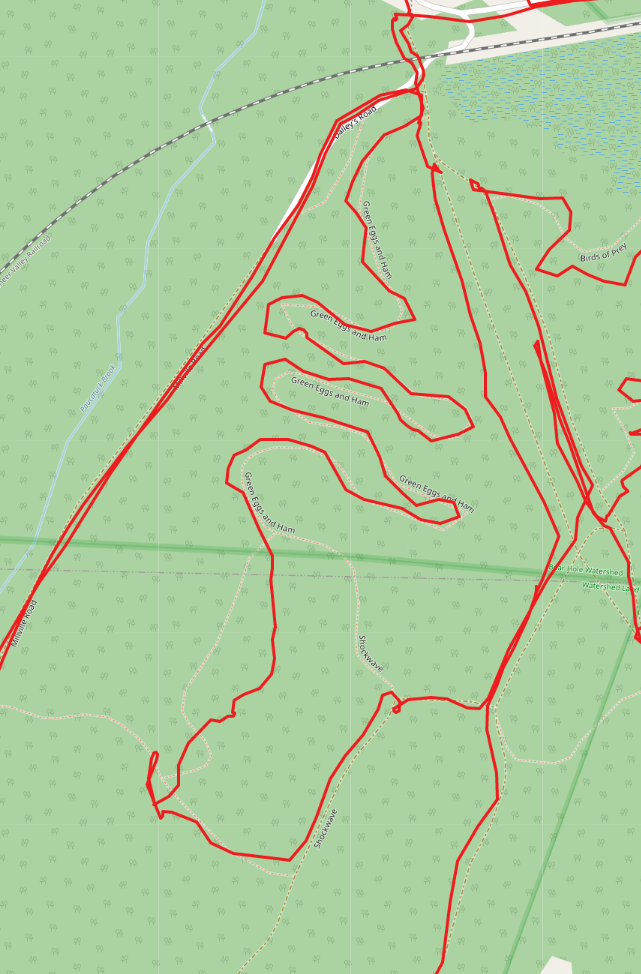 Green Eggs and Ham was lots of fun – just barely comfortable on the gravel bikes, really one should probably repeat it a few times until memorized.  Just before the last turn I spied a rider who I thought might have been NCC’s own Juan northbound at the end of Millville road and almost called out, but it’s a good thing I didn’t.  Juan was indeed present, but that was not him.  Still we near-missed a comical number of times: 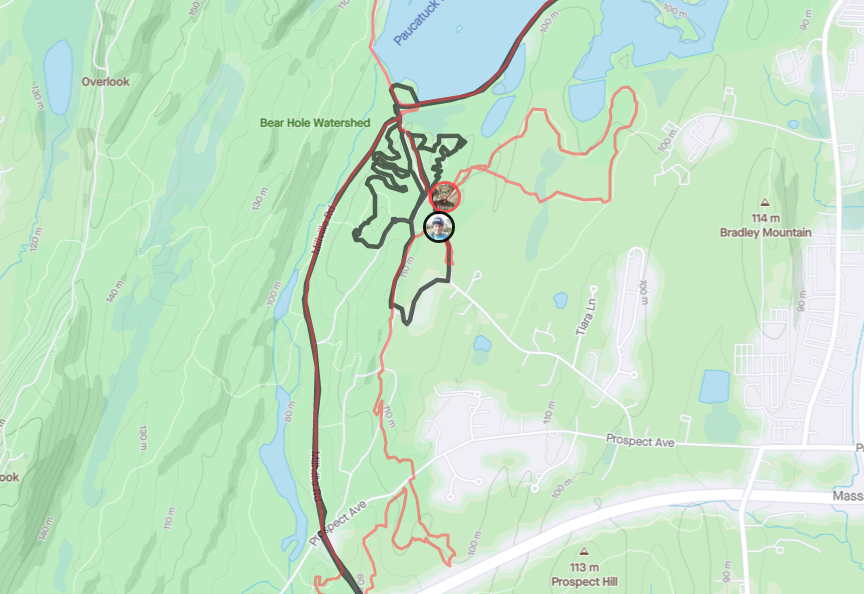 After Green Eggs and Ham we headed south on Millville Road, crossed under the Mass Pike and began exploring the terra incognito of what I’d been thinking of as “Bear Hole South” and got ourselves twisted up in the “Husker Du” trail  which was more than a bit confusing for its density of switchbacks in a small space, even as we watched two on mountain bikes navigate it 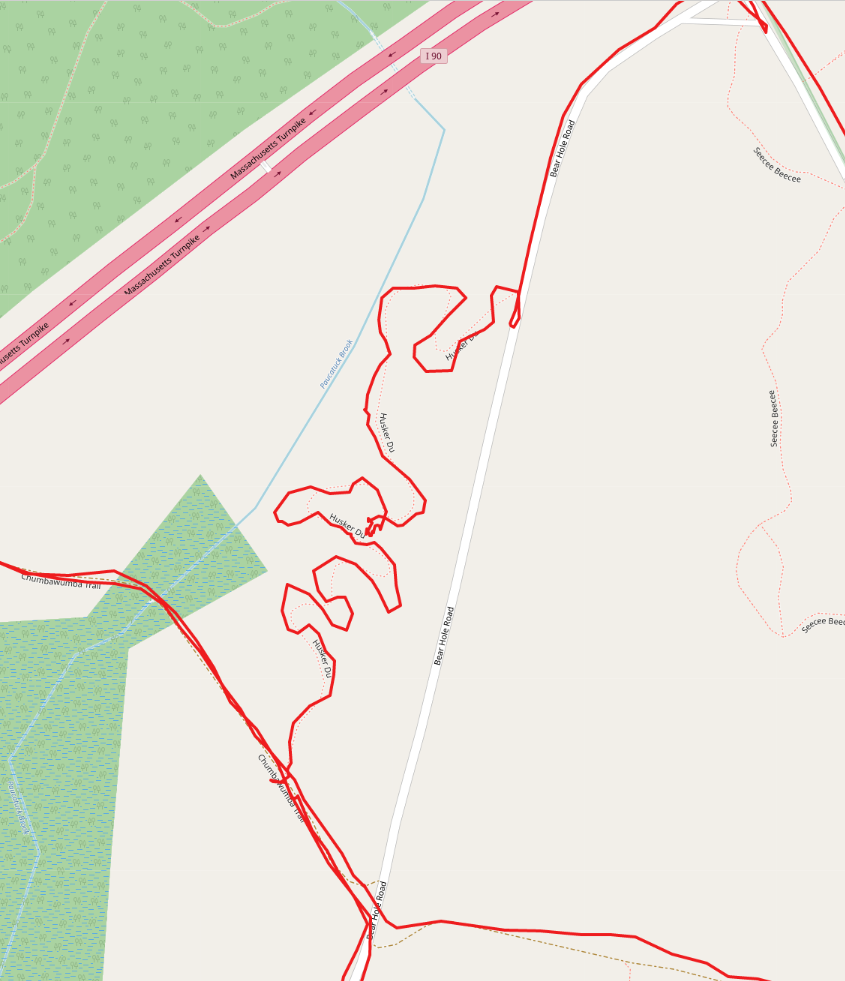 A bit annoyed riding all-but-closed circles in the woods, we instead set out south on the road and resolved to circle the reservoir. 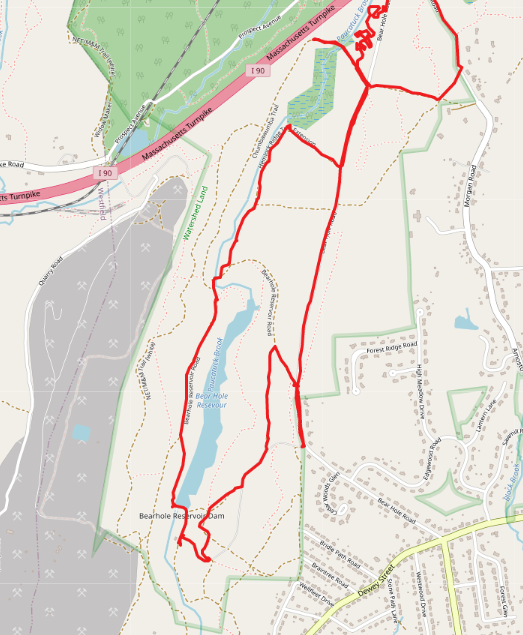 After a brief false start heading south on a road to an entrance where the threatening signage has not bee updated to reflect the fact that the reservoir is no longer a drinking water source, we retraced north and entered by a proper path, then descended a switchback trail path past the former aeration facility and climbed up the dam to a view of the one-time reservoir proper 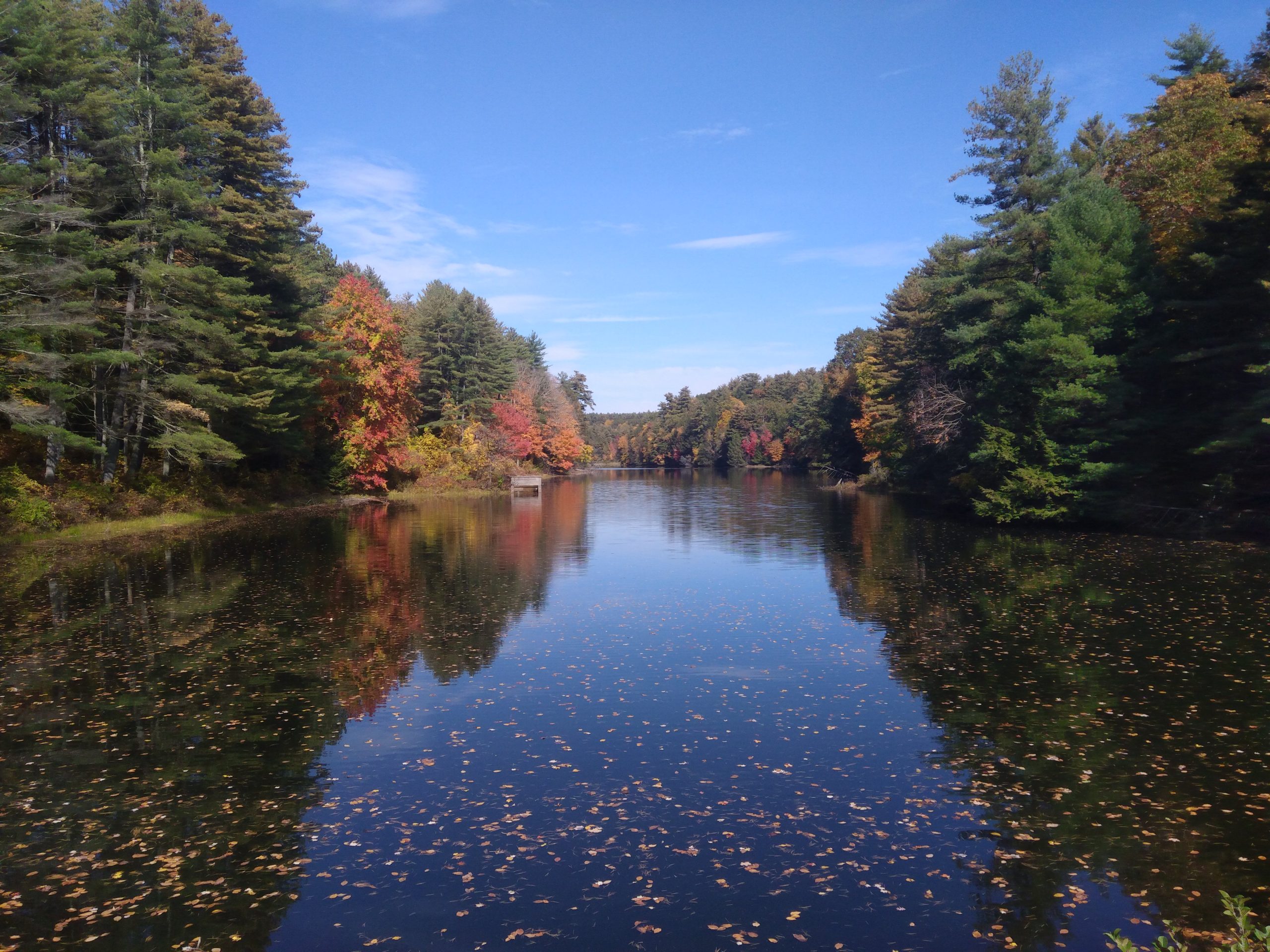 After a snack stop we began our return north up Bear Hole Road. I’d mentioned I wanted to divert west to see if the Chumbawumba Trail which we did not ride actually made it across the swamp from the west side of the reservoir, and set off down the loose rocky hill to check that, regretting that others were unnecessarily following behind.  But after verifying connectivity we climbed back up with less difficulty than expected.   On a whim I took us east of the road on a path that I hoped would connect to the SeeeeBeecee trail, but of course managed to miss the entrance to that, and instead take us up a steep, loose climb at the limit of rideable / not rideable variously.

That let us out on former Morgan Road which we took north, under I90 and without further diversion back to the portage across the tracks.  But not content with my past misdirections, I sent us the scenic wrong way through the Ashley once again, necessitating a retrace to return to the Elks Parking 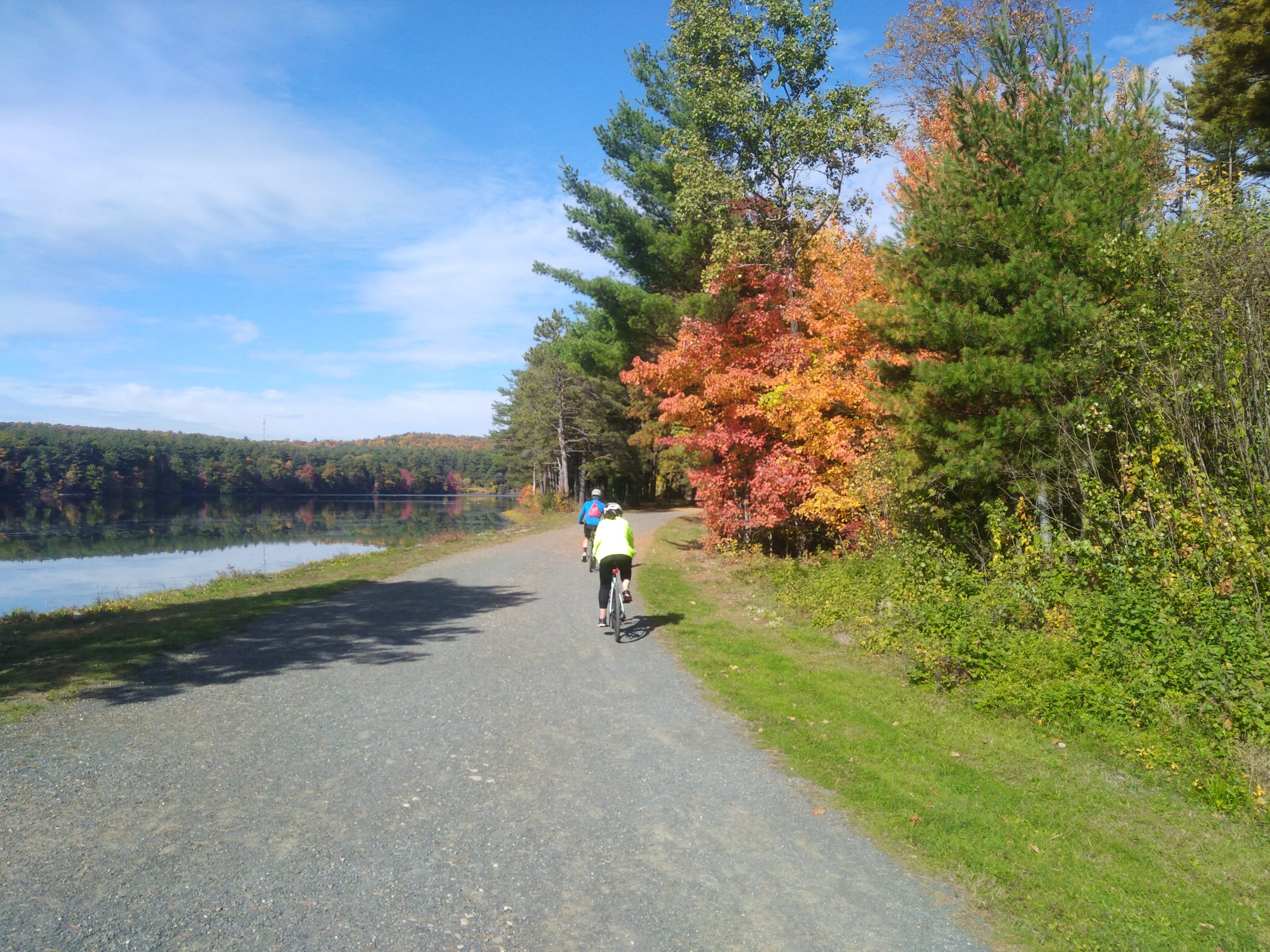 After saying goodbye to Kent and Jennifer at the parking I began the return to Northampton by crossing 202 with the pedestrian light and riding up Doyle Drive in search of the Holyoke Trolley Trail.  My first venture into the HCC trails was a bust, up a steep and often unrideable hillside with many fallen trees.  But further north I found a more suitable entrance and set off on a more rideable part of the former trolley route.  On my previous visit I’d felt silly for skipping the “Hellgate Trail” shortcugging part of the trolley’s roundabout route, but multiple stream crossings in taking that proved that the Trolley Trail is indeed the proper route 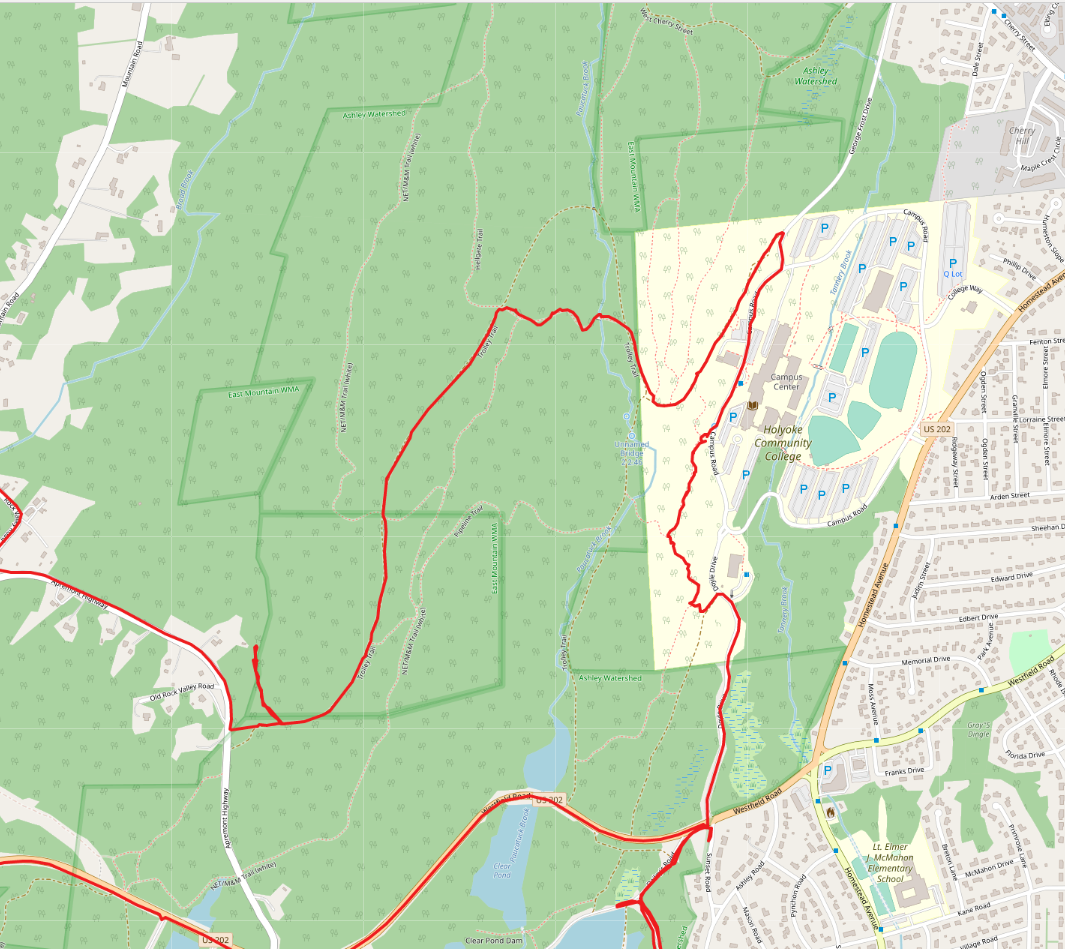 Past research had shown that the so-called “Trolley Trail” actually departs from the trolley’s route before it reaches Apremont Highway and this time I managed to note the distinction between the modern route to the left, and where the actual rail route went on a constructed elevation to the right 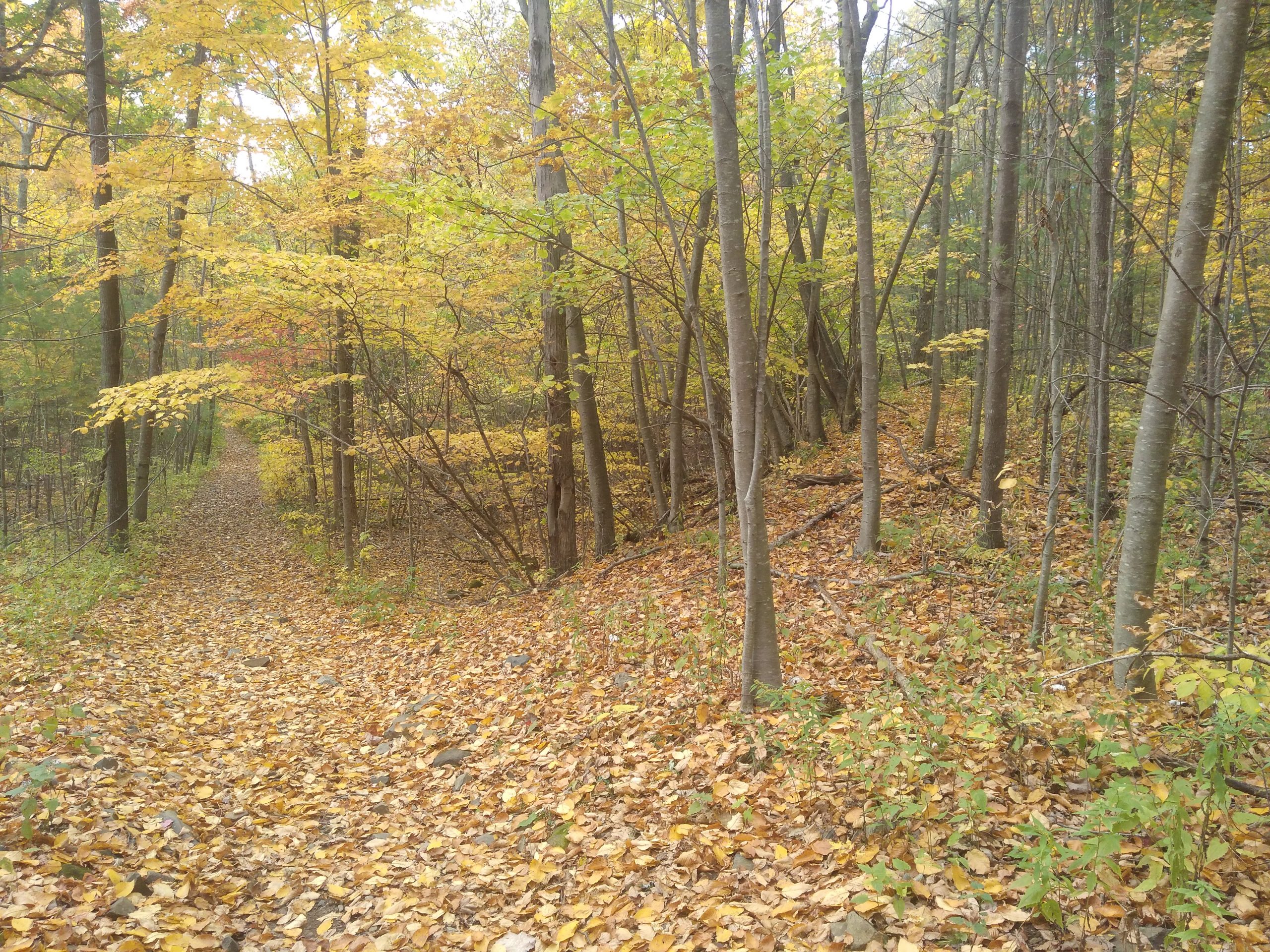 Alas attempting to pursue the “True Trolley Trail” to the right got uncomfortably close to houses, so I retraced and exited the modern gate onto Apremont.

Uncontent to be done with the woods, on the way home I detoured into the Southampton WMA before ultimately returning up the trail to Northampton.