Although I’d received some expressions of interest in this morning’s C ride to Westfield, the combination of a chilly start to the day, and two last minute cancellations from those I’d been expecting left me wondering if I’d arrive at Pulaski Park to find no one there. I decided if that happened, I’d double back home, make a sandwich and grab a few additional things that I hadn’t initially had time for, then head in the same general direction and go try the gravel/MTB trails in the southern half of the Bear Hole reservoir since I still had that wheelset on.

But that worry was for naught, as when I rolled into Pulaski Park a couple of minutes late I found two riders waiting – one joining the Saturday C for her first time ever, and another for at least his first time within my tenure of doing them!

We set out around the corner to the trail, then I made the first of several slightly wrong turns as we came out to the road, but we soon rerouted towards Park Hill, getting a feel for climbing on the brisk morning.  Two lower body layers and three upper seemed to be the order of the day, though fortunately having not found my wool socks in time did not turn out to be a problem.  Park HIll Road is so familiar as a return, but using it as an outbound leg felt different.  Somewhere in the general area of Loudville Road we were joined by a third rider who’d been waiting to jump in, and then rode with us a bit, but paces didn’t really seem to be matched and we lost him off the front. 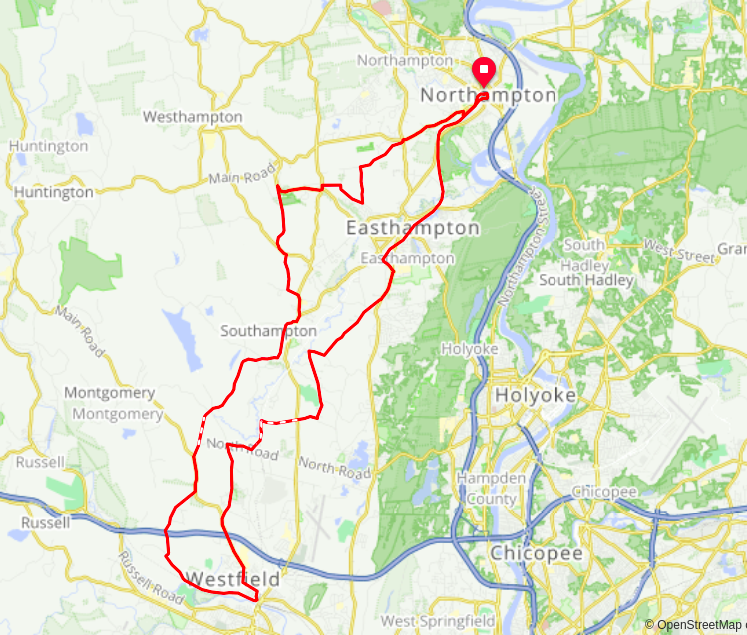 Although both the total distance and elevation of this route are fairly mild, you do feel some of those outbound climbs.  I’ve managed to miss the turn onto Wyben more than once in the past (do that and you end up in Westfield anyway, but cheating some of the hills).  This time we took the proper turn, but it sure seemed to just go up and up, even though on the elevation plot it’s not much more significant than the previous climbs – maybe just because it was the last on the outbound? Incidentally, although the map above suggests it, none of the route was unpaved – though some of it could definitely use a re-pave!

After that last bit out outbound climb you descend a hill, go over the Mass Pike and then pass through a farming area and follow along the north side of the tracks to the Pochassic Street Rotary, which is the official turnaround point of the ride.   But it seemed silly to have ridden to Westfield, but not really seen much of it, so we went down the steep little bit of road and crossed the former rail, now trail bridge at Women’s Temperance Park 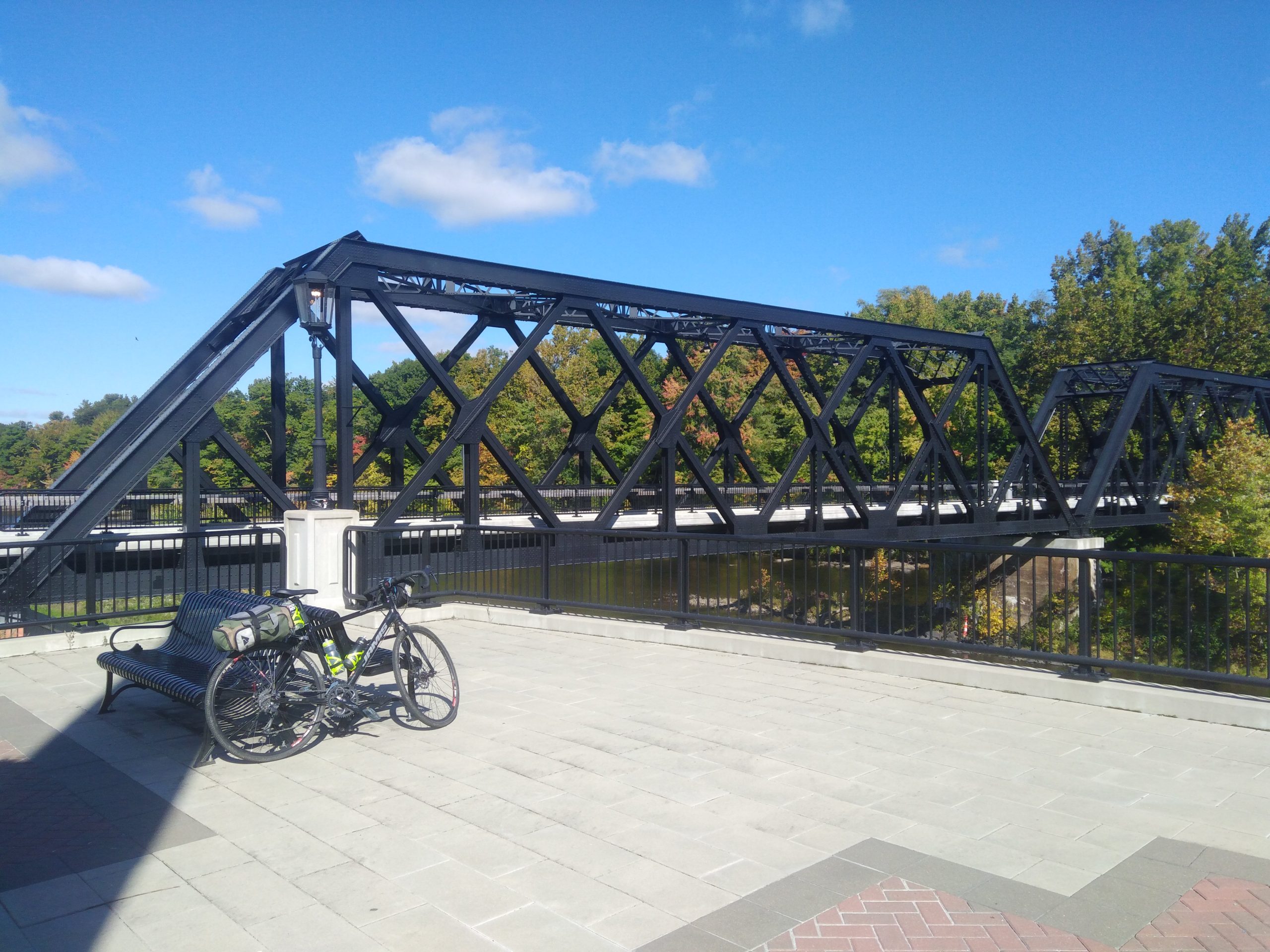 Sadly, this trail bridge over the Westfield River doesn’t really connect to anything but this riverfront pavilion yet.  The new section of trail running about a mile south on the elevated rail ROW down, across a new high bridge over Main Street and to the existing trailhead of the New Haven bound trail beside Stop and Shop is all built, but the raising of the surviving rail bridge over Elm Street has been delayed by a year, so officially all of the new trail is fenced off – and while I’ve seen people on it, we stayed off.

Theoretically the northbound plan is to take a lane from the wider than needed road, then build a six million dollar corkscrew trail bridge over the tracks.  Using the sidewalk to get back to Pochassic Street was indeed a bit awkward, but that’s the part that would merely take a road lane.  Riding up Pochassic Street to the rotary (what the $6M bridge would skip) was a non-issue, and even if it were, there’s a sidewalk that could be walked…

Our run out of town on Montgomery was comfortable and uneventful apart from my missing the intended turn onto Prospect Street, but a quick checked showed the routes would re-converge anyway, so we just kept going.  In the past I’ve typically stayed on North Road all the way east, and I accidentally started us that way again this time, before we made a U-turn and returned to the planned route north on Brickyard.  Although hilly that provided some nice contrast.  At one point I realized I was riding through an area beside a field that I remembered intently studying in satellite view looking for where the train tracks would have been, and was pleased to spot their overgrown channel through the woods to the right.  Soon thereafter the tracks themselves became visible in the woods paralleling the road to the left, including going right through someone’s front yard.

We turned north, then east, climbed some more, crossed route 10, and turned at the eastern end of the East Street bridge, which while still closed off looks to be essentially done and re-paved.  A bit more climb took us to Line Street, which became Park Street where we encountered a driver who insisted that we cut in front of them into the rotary, only to get stuck behind us long thereafter.  When they finally went past we noticed NJ plates, no wonder.

My phone adamantly insisted we take a hard left turn from Park Street onto the Manhan Rail trail, but I didn’t really feel like jumping off the bridge where the road crosses it at the commanded location, so instead we finished the descent and then cut onto the trail making a more appropriate right turn, and discussed our final destinations.   One rider went his own way at Ferry Street, while the remaining two returned to Northampton to part ways for the climb from the Felt Building up West Street and the trail run out to Damon Road parking respectively.