Three intrepid adventurers used hair dryers to defrost their freehubs, donned fur-lined parkas and electric socks, and set out on a freezing September morning to ride 55 miles to Wendell, where they carried their bikes on a wooden ladder across a crevasse.

Finding new and interesting placed to go within the 40-60 mile definition of the Saturday C ride has been an interesting challenge.  It seems we’re always going to the same few destinations with a few minor variations, but looking at a map, so much of what’s interesting is just barely too far away to reach with an in-scope ride starting from Northampton.  The club’s library of longer B rides is chock full of interesting potential for solo explorations, or rides that start from a remote location, but very occasionally there’s something there that can be made to just barely work.  And so it was with a bit of a B route through Wendell – by going a bit more directly to the interesting part, I was able to come up with a 55 mile route that fit within scope.  And after a little juggling, I realized that I could also make it pass the small parking area for the Lake Warner Boat Launch on both the outbound and return legs, so if someone wanted to shorten the ride they could park there and ride just 42 miles, rather than 56. 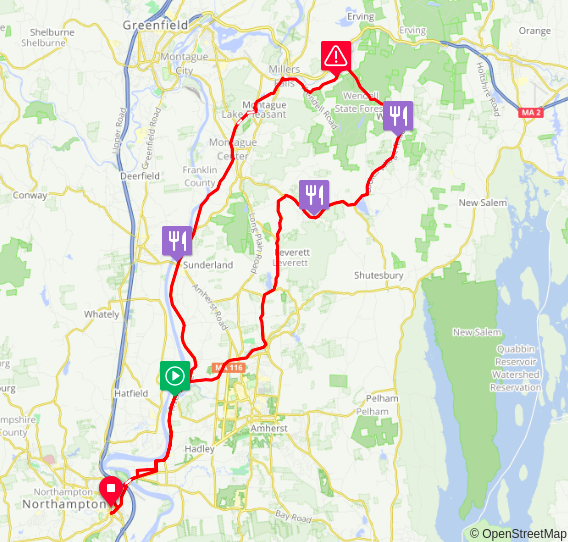 While morning temperatures were apparently in the mid-40’s, I’d foolishly left my bedroom window open overnight, so I woke feeling the full reality of the fact that it is no longer summer.   Briefly I even considered wearing running tights over full length chamois tights, but ultimately opted for just a single tights layer over chamois shorts, and a double upper body layer, which mostly stayed on.  Even on the initial run to the Pulaski Park meetup I wished I had something more windblock and almost turned back to grab it, though ultimately did okay against the wind chill for body core.  Although I brought a pair of unpadded full-finger gloves, I toughed it out in padded half-finger ones – though with the full realization that my recent claim of being willing to ride when it’s above freezing and the roads are clear is going to need to get back into some habits, determination, and gear selection that are at present just a distant memory from last winter.

Our initial run out of town went well, and the Damon Road crossing was finally open again.  It soon became apparent that my two companions were stronger riders than I, so once we were out on 47 I flicked my elbow and gladly rotated to the back to sit on a wheel and be leisurely pulled along.  I’d routed us east via Stockbridge Street which is a bit less familiar personally, and a brief break there prompted discovery of an interesting gravel track I’ll need to return to explore more properly.  In writing out the cue sheet for ride-time reference I’d dismissed the turn to Knightly, but it’s key to continuing east, and fortunately we caught it.   Having recently taken the Tuesday C to Puffer’s Pond I routed us that way again, but this time realized that the paving there, while not terrible, is not exactly wonderful for road tires either – it makes a better destination than a cut-through.

Leverett Road had long been decrepit, on an earlier Saturday C ride a month ago it was found mostly re-paved but with huge cavities around each of the street drains.  Fortunately, my gamble payed off, and it turns out that a month was enough time to finish the project – the whole road through Amherst to the Leverett line was beautiful.  Granted the drains are placed well into the lane, and depressed maybe 3/4 inch, but with one exception they’re of a grid form.  The exception had bars, oriented in the proper crosswise direction, but it was square so could conceivably be re-installed in the dangerous parallel orientation after a clean-out(!)

Our ride continued uneventfully through Leverett to where we began the climb of Cave Hill Road, a notable peak on the overall elevation profile, which I’d personally ascended only once before two years ago.  Fortunately it was easier this time – there’s about a mile of climb and although some of the first part allegedly hits 12%, it really didn’t feel like that.  The New England Peace Pagoda sits atop the hill, but detouring up its drives and walking paths doesn’t really fit within the determined mission of a group road ride.

Descending the north slope of Cave Hill took us perpendicularly across the route of last Sunday’s informal Wendel Gravel ride, a route we’d knowingly play tag around through much of the day.  The final descent towards North Leverett Road encounters some interesting old mill buildings, but with my companions ahead there was no time for photos, and we turned right and began the sustained, gradual climb towards Moore’s Corner, the Leverett Coop, and ultimately Lake Wyola.

We took a short pause at a gated jeep road that heads north into the woods opposite Lake Wyola – my understanding is that it’s something my nephew explored during a mountain biking camp, but I need to make a point to come back with my gravel tires and give it a try myself.  Instead, our actual route turned north on paving, for a run up to its effective highpoint near the Wendell Store.  Alas I forgot to re-zip my upper layer after the stop, and the combination of cold and being constantly whacked by the zipper pulls forced a stop to address that, which left me in a several miles chase behind a 100 yard gap I didn’t manage to close before the other two pulled in at the Wendell Store.  The day’s cool temperatures meant none of us needed a fluid refill, but at least one went inside and an appealing looking muffin was purchased.  I’ll shamelessly admit I fell for the packaged mini-muffins handed out at the recent COVAC century (they almost, but not quite made up for the absurdity of stocking rest stops with sugar free gatorade) and just bought a boxfull, so enjoyed one of the two packets I’d packed along.

In planning it had seemed like the Wendell Store would be our highpoint at around 1160 feet of elevation, but in practice we encountered a number of re-climbs.   That said, for riders who love long descents, the route from the store via Farley and Mormon Hollow does indeed have a lot to recommend it!

Our continuation onto Mormon Hollow was however marred by some uncertainty prompted by a “bridge out in 1 mile” sign.  My map didn’t indicate great alternatives, but being game for adventure we opted to continue our descent, knowing it was possible we’d have to climb back up it.   Just after Diemand Farm we encountered the cause of the signage: 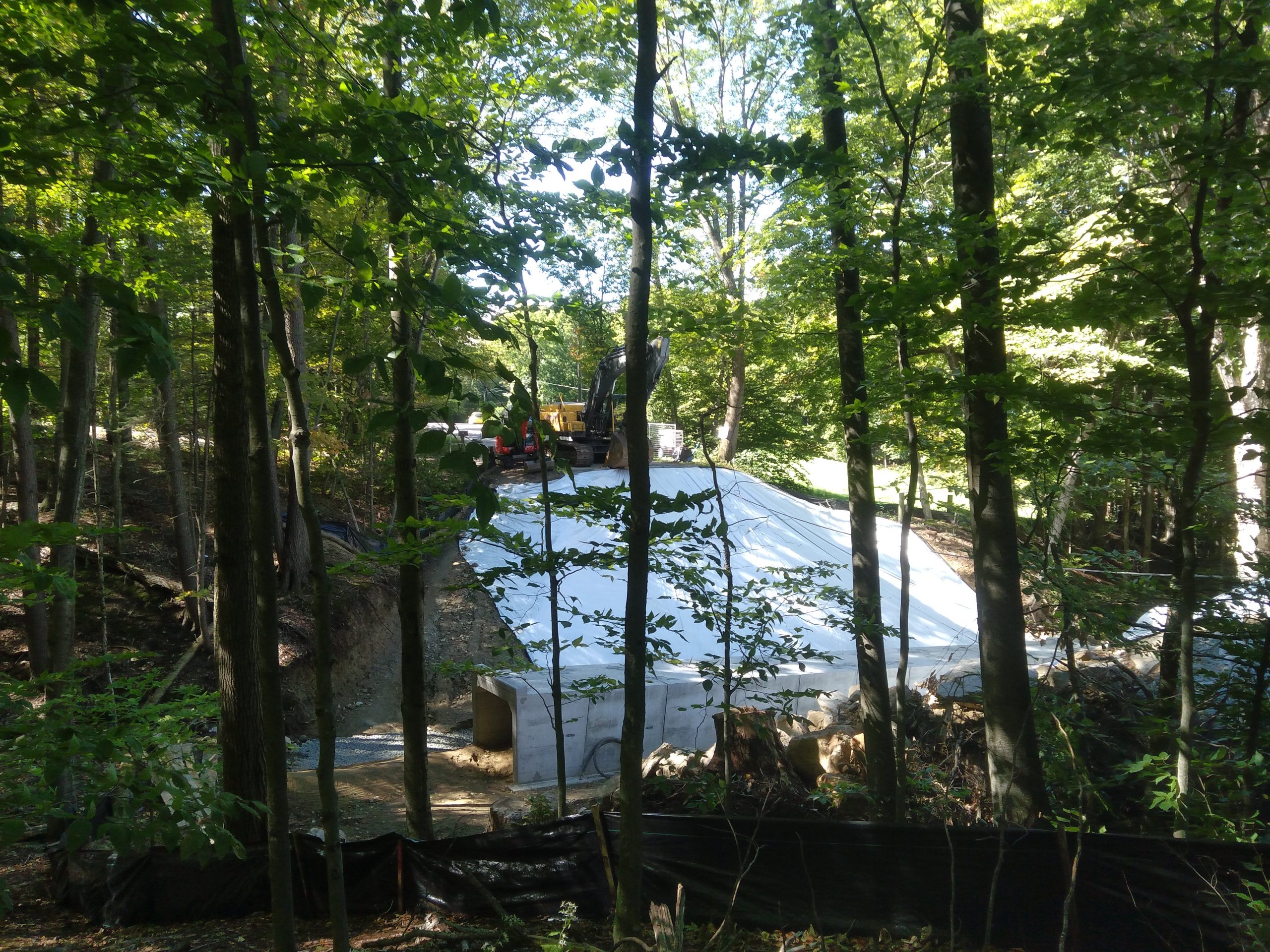 A bridge was under re-construction, and the road was blocked by fencing.   We began investigating possible bypasses (a gravel track had veered off to the left just before) when a woman came out of a farm building and helpfully directed us to an official, if “use at your own risk” walking bypass path. 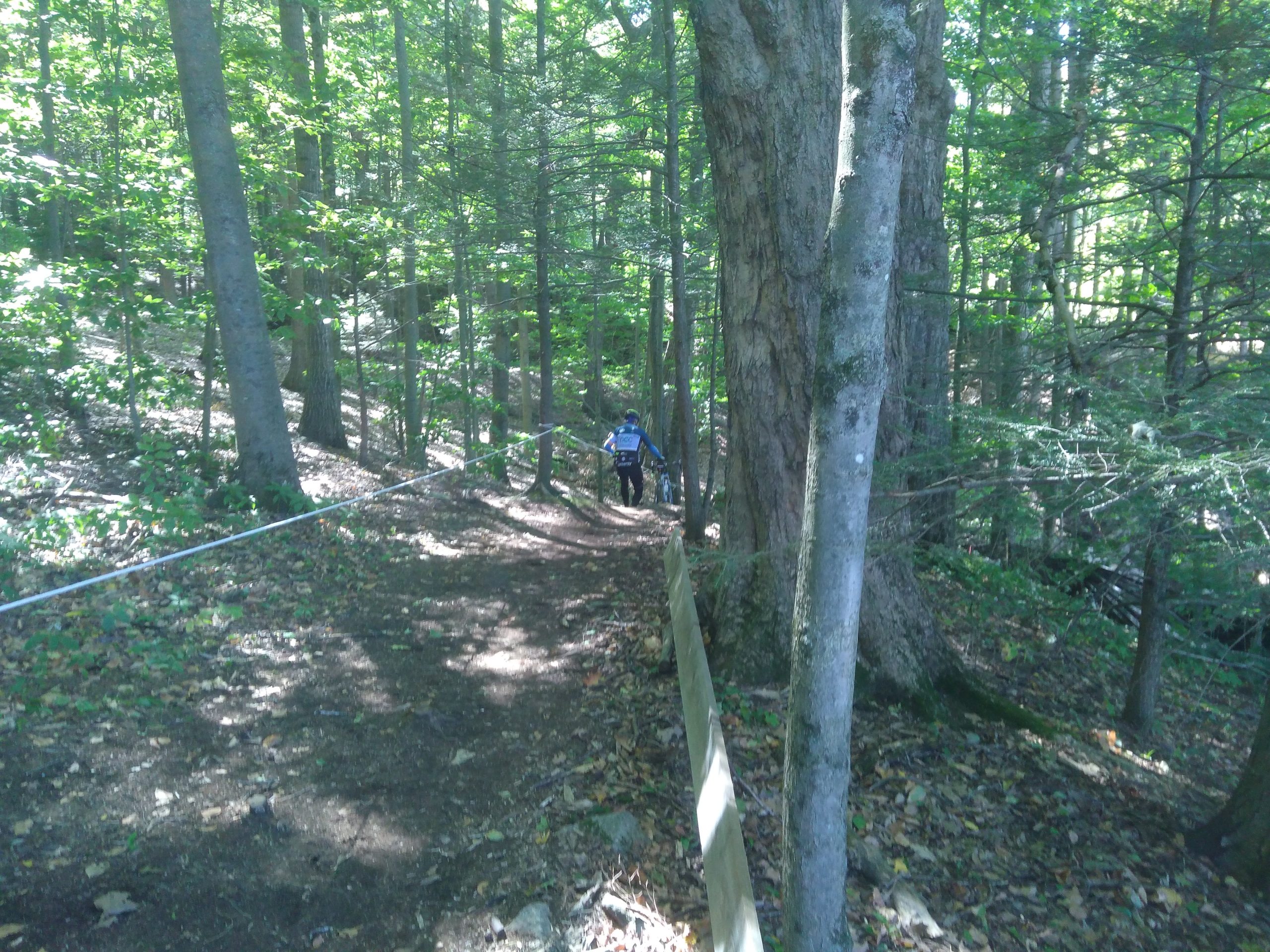 And indeed, we shouldered our bikes and carried them upon a wooden construction across the chasm. 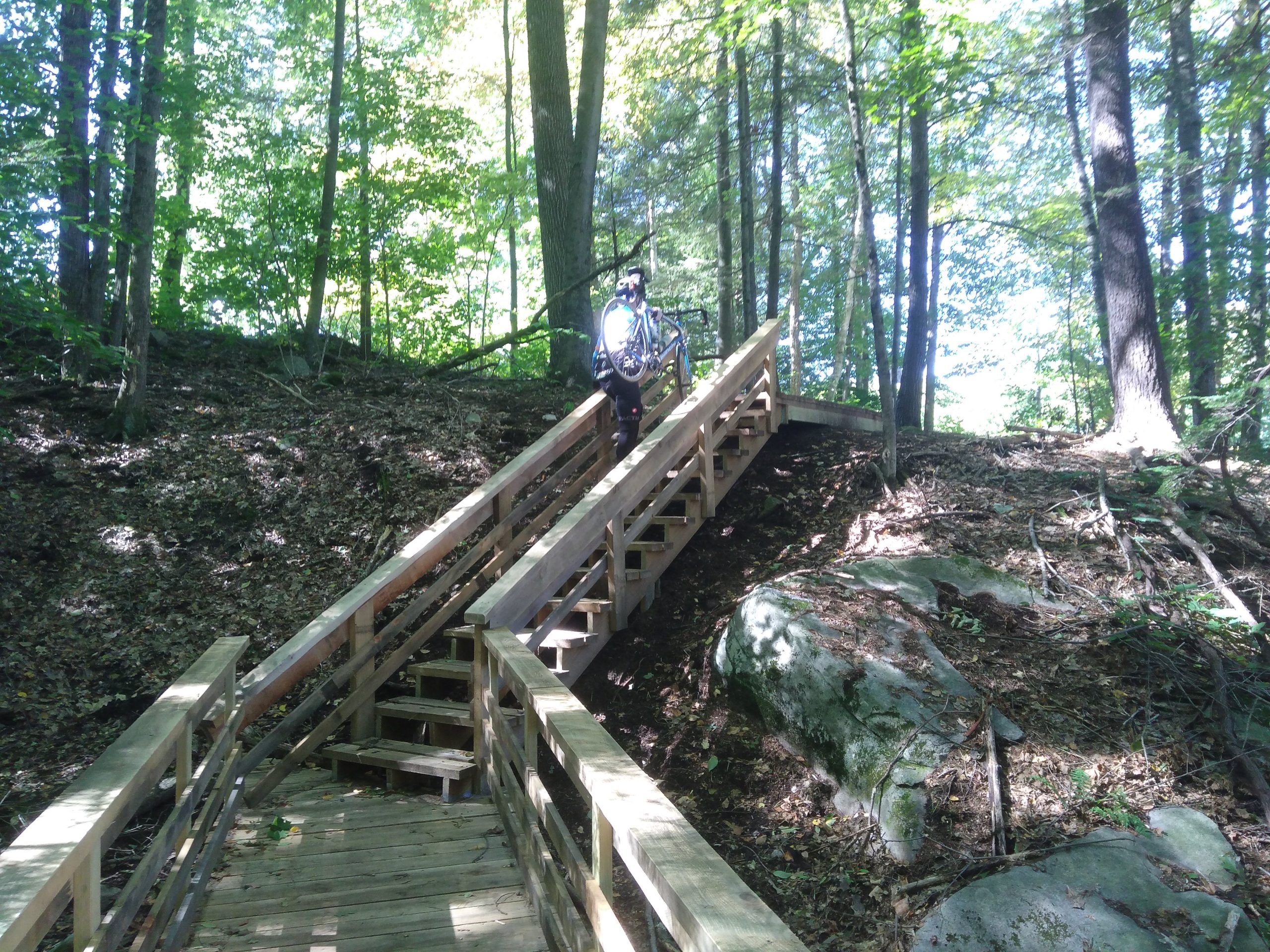 What’s that you say, it was six inches deep and bone dry?  Well, in theory at least it’s sometimes a water course – why else would they have dug such an impressive trench to bury a concrete culvert?

Adventures through the unknown wilds of Wendell concluded, we quite soon we made our way into the edge of the village of Miller’s Falls, left it via Green Pond Road, and reached the locally famous Bridge of Names. 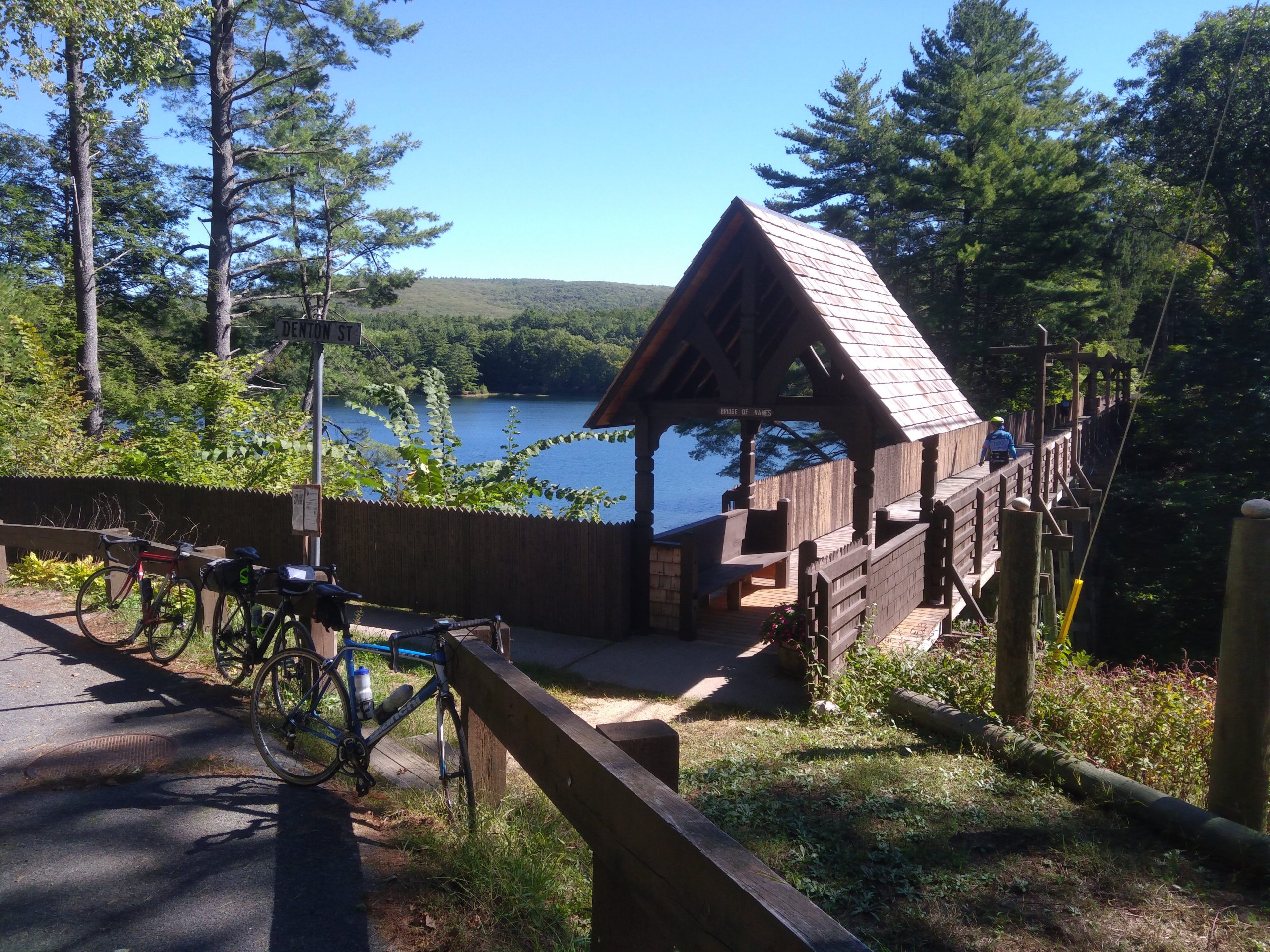 My case officer at The Franklin County Ministry of Tourism has made it sternly clear that it’s not enough to put things like this on a planned route – I won’t actually get my kickback unless we stop and take a picture, so we did.

Our planned route south involved traversing the well-packed gravel mile of Old Northfield road, but both of my companions were running narrowish tires and although my road wheels are fairly wide, I had no real need to get sandy grit in my just cleaned chain, so we opted instead for a paved bypass via Lake Pleasant Road – one I quickly realized meant we could have actually crossed the bridge of names, since we were going to encounter the usual re-climb penalty of doing that anyway.  A very brief stretch of route 63 brought us quickly to Swamp Road, much as on the COVAC routing from a few weeks ago.  We bypassed the Bookmill without a stop (oops, there goes that tourism ministry kickback, how could I be so careless?)  and it turned out we had no Doctor Who fans on the ride, so the Tardis merited little but a momentary laugh.  Old Sunderland Road brought us downhill to the falls, but chasing my companions at a fairly good clip I more heard than saw the fact that recent rain has indeed made them a falls once again.

Sometime earlier it had become apparent that while no one had take up on my offer shorten the ride by jumping in at the Lake Warner Boat Launch, we did have a rider who was hoping to head west towards an end in Florence.  So after a bit of consultation, we abandoned the original plan to return south via 47 on the Sunderland/Hadley side of the river, and instead crossed to Hatfield.  Ultimately though it seemed all were game for a little bit more, so rather than part ways at Christian Lane we all turned west and climbed from Whately up towards the Mountain Street Reservoir.  For a while it was uncertain if we’d head south via North Farms or continue down to Haydenville, but ultimately the latter option won.  Our Florence-destined rider peeled off from River Road to ascend the “goat path” to the rail trail, while the other two of us rolled through Leeds and ultimately Elm Street to part ways just short of downtown. Looking at my trip meter reading in excess of 60 miles I briefly contemplated how many times I’d need to “circle the block” to reach 100 km, but finally decided enough was enough and simply headed for the warmth and carbohydrate refreshment of home.