This Saturday’s ride through Goshen, Cummington, Worthington, and Chesterfield was a textbook example of just-in-time synergy.  Thomas Brothers, newly joining the Saturday C leadership team for his first event as an NCC ride leader found a clockwise route way out to Cummington that looked interesting, but even putting our heads together in intent of co-leading we were struggling to come up with a way to cut it down to a reasonable scope for the Saturday C ride.  Briefly, I’d considered routing us home by way of the DAR and Ashfield Road down to Williamsburg, which was looking reasonable climb wise but still a bit long in terms of distance.  Just as our options were looking grim and I was wondering if we should consider something else entirely, this Saturday’s B ride was announced and we saw in it our golden answer – we could steal their outbound route as our return.  I was one mouse click away from making that the ride when Tom suggested, “why not ride it the other way around?” so that is what we ultimately announced – a route which would follow the B ride out of town on Tim Cary’s wonderful set of route 9 bypasses, take 112 from Goshen up to Cummington to meet our original plan, then come home through Worthington and Chesterfield.

Of course no last minute bit of synergistic planning can ever be quite as perfect as it seems, and not long after clicking “send” I was made aware that in my haste to the get the word out that were would in fact be a Saturday C ride I’d, misread and overlooked the fact that our stolen outbound route included not just an unpaved climb on Old Goshen road, but the extremely steep bit of Village Hill road out of Williamsburg that I’d barely survived on its singular appearance in a C ride earlier this summer.

Fortunately, today was one of those days when reality turns out better than fears.  Five of us set out from Pulaski park just a few de-confliction minutes behind the B ride, with Thomas leading from the front, and myself intending to sweep but initially following Tom and periodically counting heads in my mirror.  The day was clear but cool, with most of us in tights, leg warmers, or full-leg kit, and the initial ride through Northampton effective, but simultaneously relaxed and sociable.  A bit of conversation got us through the Audubon climb and following stretch and we descended into Williamsburg ahead of my mental expectation of warmup slog.  Fortunately, in contrast to my previous experience, the Village Hill climb was a threat that never materialized.  My memory was of a hill too steep to climb seated in my 34t gear, but with my next choice of 26t across the dreaded “get what you pay for” “megarange” gap being too tall to try standing.  This time I just rolled up it in the 34t, constantly expecting the “make or break challenge” to be waiting around a corner that never came. I guess maybe the summer’s efforts have built something after all.

Despite different speeds of ascent, we were all feeling pretty good and opted to push on and take our chances on the unpaved pitch of Old Goshen Road, rather than divert to the likely fairly reasonable bypass on route 9.  A bit of new paving where my trip meter and route study implied we should be hitting the gravel deceived me into beginning to hope conditions had changed, but no, we did finally come upon an unpaved climb.  At least it was well packed and bound together – I had both the 32mm tires and the gearing for it, others had the legs, and we all got up without resorting to walking.  Worth noting too, that the steepest final gasp of the Old Goshen climb was paved again. 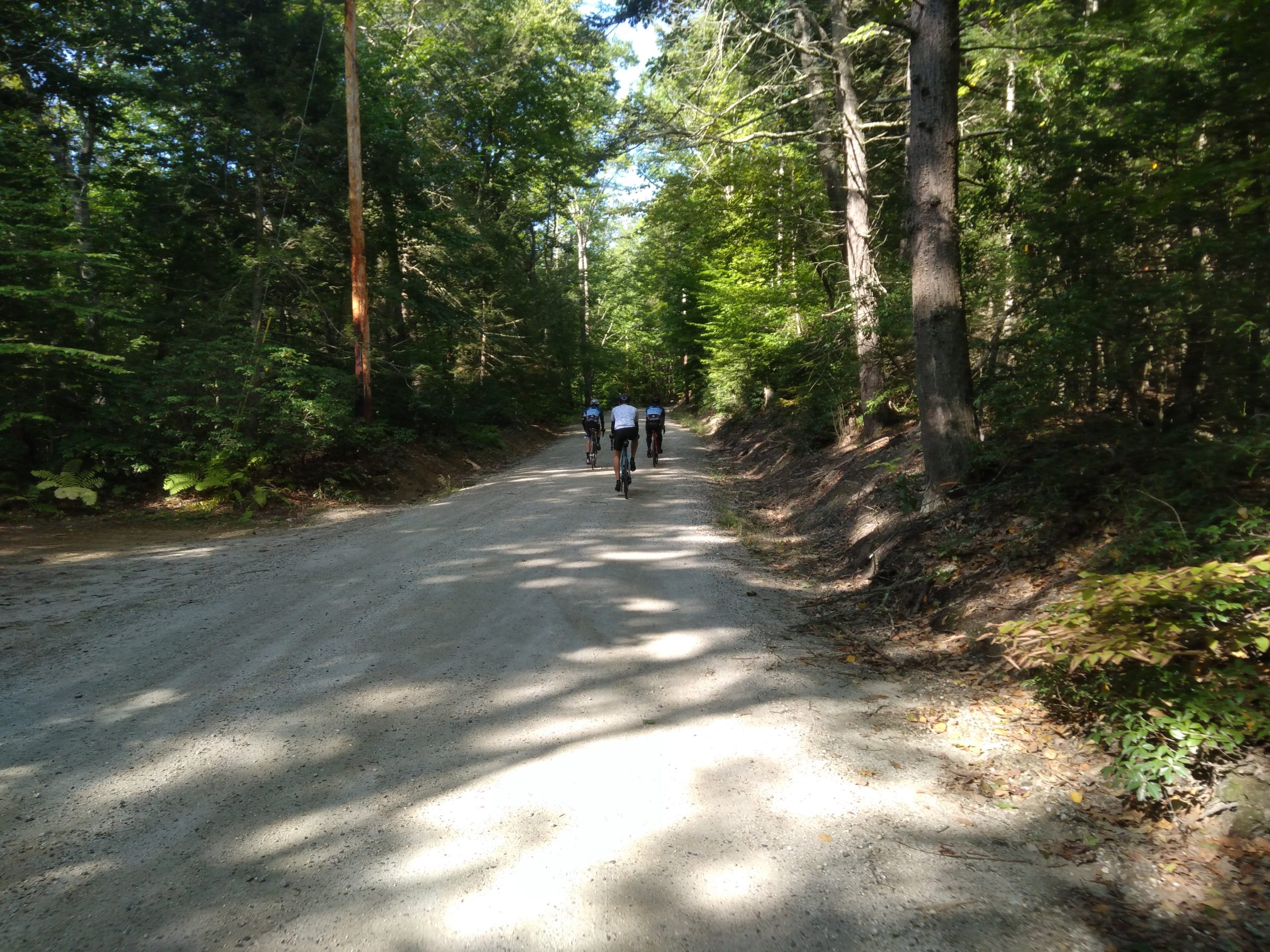 After the turn to East Street, things got easier, though just as we were about to break into the main stretch of routes 9 and 112 in Goshen we hit one of those classic dips and re-climbs that initially seems straight out of the warped reality of “Inception” where the initial descent makes it look like the following climb will ascend at an impossible angle.  There are more than a few of those in the hilltowns, and this was no exception – I’ve learned not to read too much into first glances, and while this was a climb, it was a pretty reasonable one. 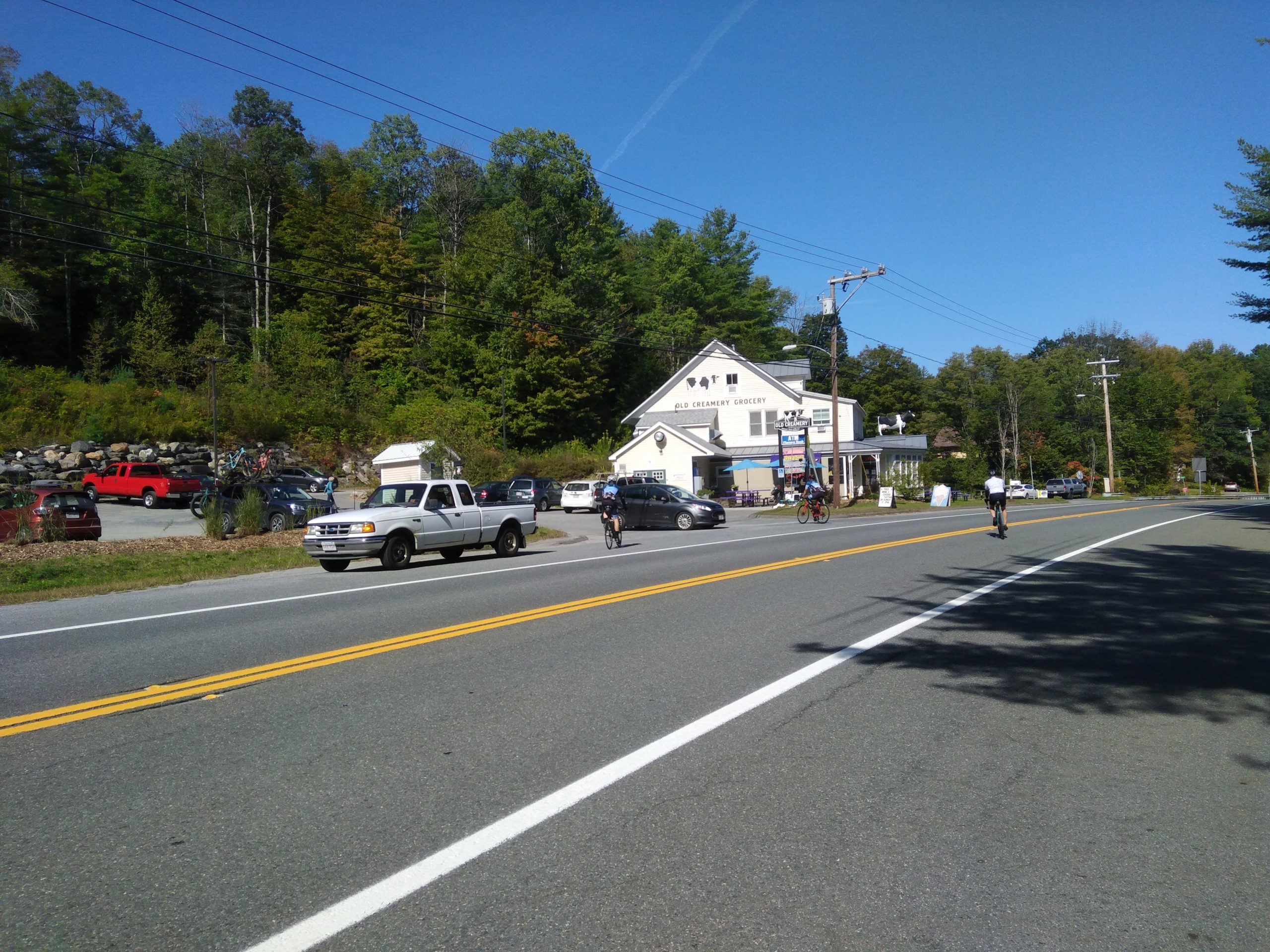 Quite soon really, we came out at our main rest stop o the Creamery Co-op in Cummington.   I pulled out a mask and headed in, hoping to find some big economical jug of water that could top everyone up, but was disappointed to discover they only had small bottles, so settled for one of those to replenish the little I’d drunk on the climb.  One of our number came up with a much better plan – feeling a need for electrolytes he exited with a full jug of orange juice, which after filling his own bottles gave a few of the rest of us a delightful 50/50 mix.  Although I was as usual packing gatorade powder in several bottle portion baggies and electrolyte tablets too, it was nice to have something a bit more natural than over-processed, so I’m going to have to remember that idea for the future! 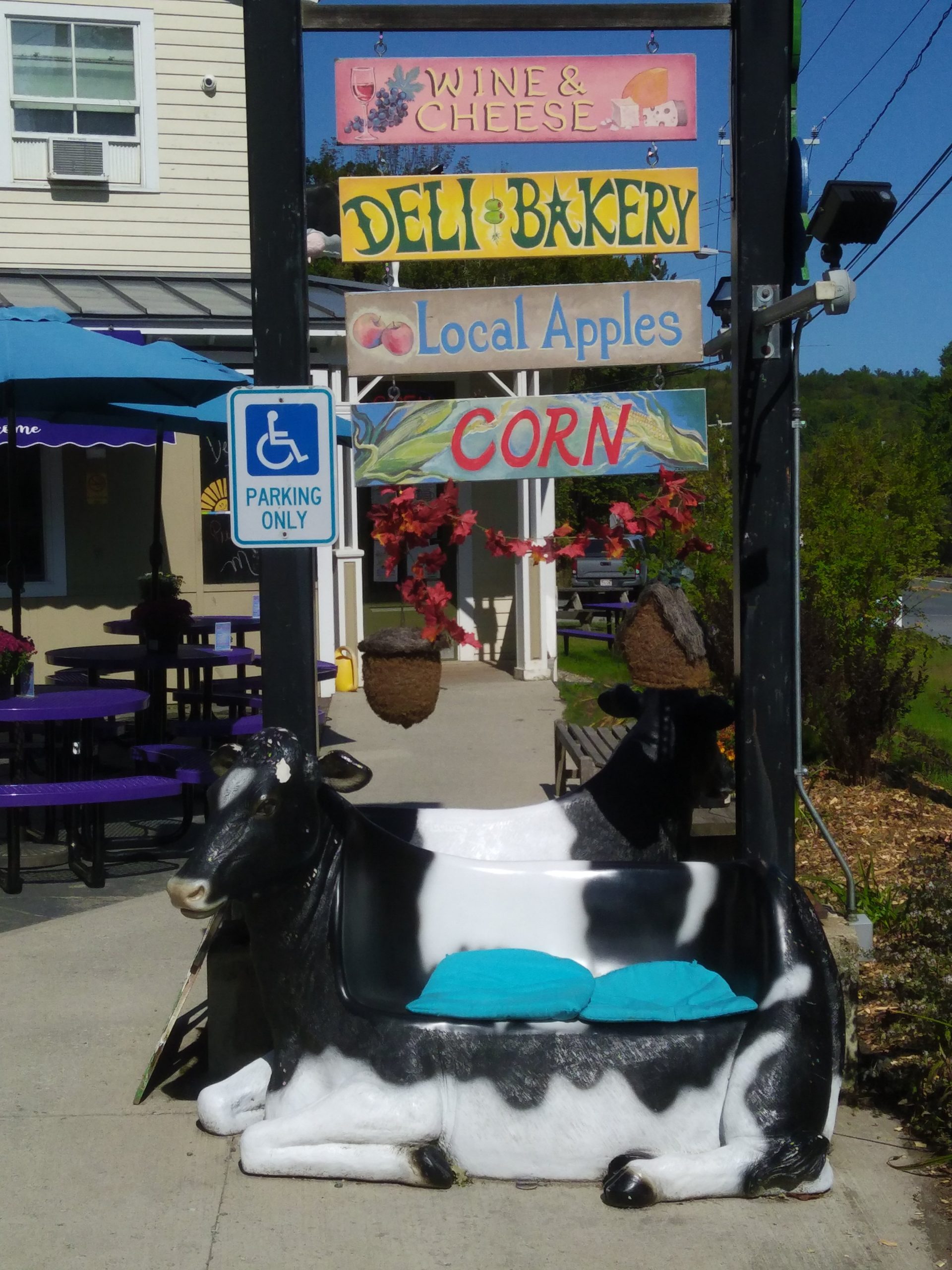 After enjoying our rest and refreshment we set out for a bit more climb to the actual halfway point, unfortunately re-discovering what a slog it can be to climb out of a rest step with not just the weight of refilled bottles, but muscles that have misinterpreted a pause as permission to go to sleep on the job.   Just a few hundred yards up the road a halt was called by the last of our number and it momentarily looked like we were going to have to split up then and there.  But fortunately were able to reach the lead elements by phone and agreed to push on a bit further together.

Getting moving again showed some of its typical  improvement, and we continued within sight of one another for a few miles, including the gravel mile of Capen Street, which was a bit rough for those on narrower tires but did avoid a small re-climb.  Riding sweep a bit more literally I had the horror of watching a free running dog charge into the road at the rider in front of me, only to abruptly cut its lunge about six inches short of actually digging into a leg.  My guess would be an overrun invisible fence that belatedly made its presence known, though I can’t really know.

Unfortunately an attempted nature pause then triggered a rather servere leg cramping episode for one of our number – that orange juice purchase had been prescient, but insufficient.  To compound matters, this occurred just as those riders with afternoon obligations were beginning to worry about the length of our outing overall.

Fortunately, having double-teamed the day with two ride leaders meant we could accommodate everyone’s needs without anyone ending up alone – Tom went ahead with a fast group of three, while I brought the other two of us back at a more relaxed, endurance pace.  And I have to admit, I really loved the contrast – despite a summer of increasingly determined club rides, I still have enough of an inner “day-scale bike tourist” in me that following up the hard work of the outbound leg with a relaxed ride through the scenic hilltowns on a perfect late summer day was everything I could ask for, tempered only by the knowledge of the challenge it had to be to persevere up that final unending climb into Chesterfield on a 28t cog and the verge of renewed cramping.  Fortunately we were able to keep moving – often it’s changes in power that are the most problematic.  After the long descent from Chesterfield itself we opted to skip the final bump of Chesterfield Road within Northampton, going around on Kennedy instead.  And although my companion wisely reminded that it’s not safely over until standing in one’s own doorway, we were doing well as we skirted downtown and ultimately turned our separate ways from where Trumbull descends to State street.