Fall definitely has arrived.  It is great time of year to ride with cool temperatures and changing landscapes.  But, also brings back the age old cyclist dilemma of what to wear.  At 49 degrees F when I left the house, I covered up in arm and leg warmers as well as a wind breaker and even shoe covers.  Maybe a bit much? When I arrived at Pulaski Park, most everyone had bare legs and half gloves though! It had warmed up to 55 degrees at that point under sunny skies. John and Benny assembled with me for the B edition, and we rolled out up Elm toward the high school and ultimately the Thursday Night route to Williamsburg center.  I was happy to see Elissa waiting for us at the Pine St mill building, making us a nice even four.

My route plan was once again designed to route us the opposite way on familiar routes, as I really enjoy taking in the scenery from another perspective.  The mid-point (or attraction, I suppose) was the Knightville and Littleville Dams in Huntington, which provide flood protection to the big cities such as Westfield and Springfield.  I did not know until I read those links that Rte 112 was relocated for the Knightville Dam, and town roads, utilities, and even a cemetery were relocated for Littleville.

A “feature” on this route are several dirt roads, that we don’t ride on much as a club.  The first of those, just a few miles out of Williamsburg center, is Old Goshen Rd.  I had not ridden this in eight years, and I remembered it as pretty challenging- so say the least.  As in, possibly walking up a climb.  This archived ride report reminded me that it might be one of the few times we’d have to walk a short section of road.  Turns out, all the worry and drama was unfounded.  It was a decent dirt stretch that we all rode up just fine.  We continued to stay off Rte 9 by using East St, which goes by Camp Howe and the DAR lake before we hit Rte 9.

We had an enjoyable descent on Rte 9 toward Spruce Corner, but, as with all my rides, that was short lived- turning south, up we went on Loomis Rd… a rather steep one, but it is paved.  Loomis turns into Wilcutt, leading to Chesterfield, but not without plenty of little climbs and descents, switching between dirt and pavement.  Fun times.

At the end of that, we enjoyed the fast descent down Smith Rd in Chesterfield (I’ve climbed this many times since it was paved, but I don’t think I ever enjoyed it the other way)- then down into W. Chesterfield and over to Ireland St.  This is where we detoured off the usual route… instead took Old Post Rd to the Northwest, which I’ve ridden the whole length once a long time ago. It is absolute beautiful- hayfields, nice country homes and barns.  It pops out at Worthington Corners where we stopped to refuel at the busy country store.

About Worthington Corners….they now have a rotary there instead of a stoplight (new perhaps last year). But this intersection always confuses me and I never know why. We started out on 112 South, but- maybe technology got the best of me- told me I was wrong.  So we did the rotary twice, I was correct, the computer failed us.  Anyhow, it was a pleasure to ride Rte 112 for 10 miles— most times we are climbing it the other way.  The headwind slowed us a bit, but it was a nice relaxing segment.

Or next stop was the Knightville Dam. I’ve brought rides here many times and the beauty never ceases to amaze.  Of course, we have to climb to get up there (surprised?) A little early for the leaves to change, but nevertheless, a wonderful vista.  The drought is still present- no water to be found- usually there is a little stream, and sometimes pools of water. Not today.  I attempted a group selfie, but my skills (well, I guess my arm length) can’t match that of Melissa’s! 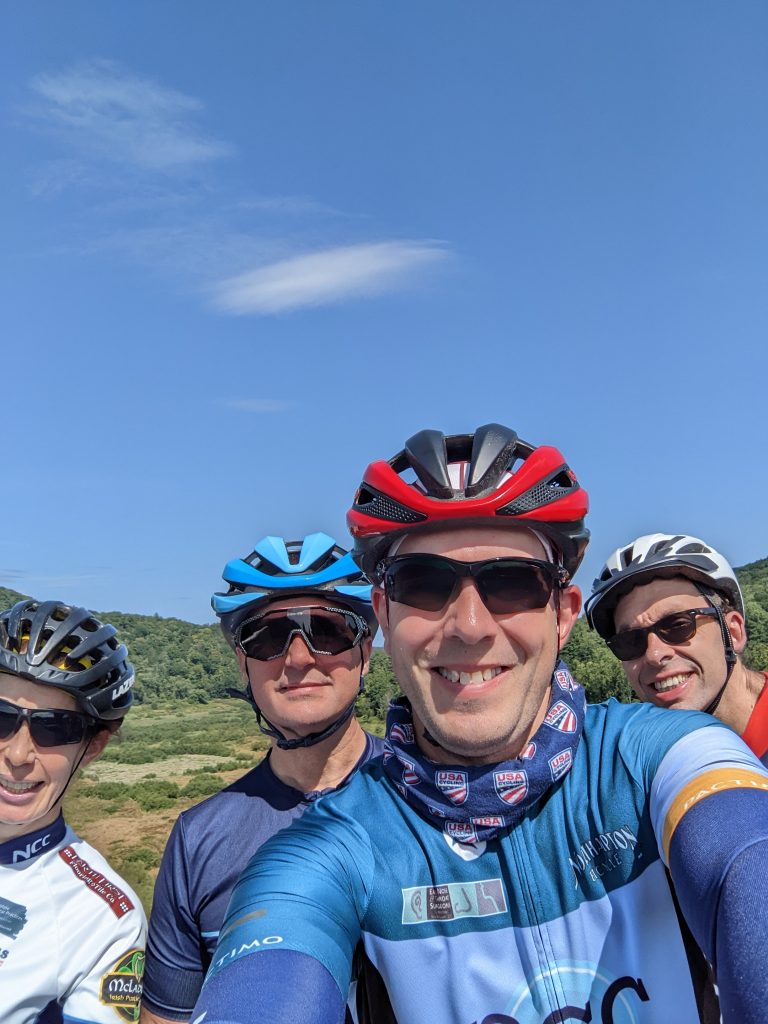 We headed back down from that dam, and proceeded on 112 some more, turning off to Littleville Rd, and (of course) climbing up to the Littleville Dam.  This one is a tough climb (Goss Hill Rd).  I was not looking, but there is a short 15% or more in there- and- just as I was pacing my way up, I noticed John’s (out of sight) hat. So, I stopped on a 15% grade.  Ugh. No way to get started again, so I walked a bit and got a little rest.  The ride on the dam was beautiful- we stopped to take in the crystal clear Littleville Lake view from above.  I decided to try something new exiting the dam (no, not swimming). On the map there was a “service road” if we continued west around the rotary. Yes, it was paved, but a healthy 15% descent!  it was pretty decent pavement and fun but we had to stay on the brakes.  It put us back down on Littleville Rd. 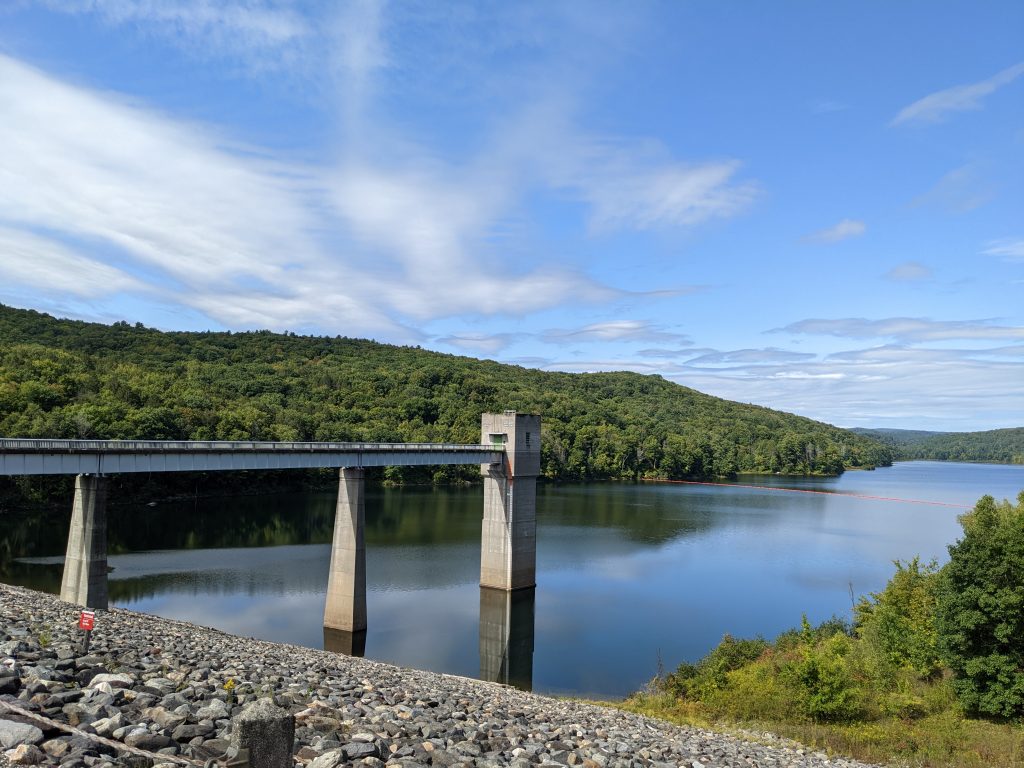 Unfortunately, there is no easy way home from Huntington.  Since I knew Rte 66 was all s chip seal mess, I decided to take us home up Montgomery Rd.  Again, this is a stretch I have not ridden in a while.  It climbs almost 900 feet over four miles, and today seemed never ending for me.  The thought of potatoes and a steak kept me going though.

Once through Montgomery Center, we took Southampton Rd, rewarded with the fast, rolling, curvy descent.  But, no, hills were not done.  We weaved our way up and down Russellville and through Southampton.  The route back to Northampton was via Park Hill Rd- John said goodbye to head home and the three of us took in the bustling Park Hill farm/Art as we climbed (!) up.

Finally, upon reaching Florence Rd, we got a quick experience of that awful chip-seal. I don’t understand what Northampton is thinking!   Elissa headed for home, Benny almost dented a Prius because the gravel chip was so heavy, he fell into the car stopped. Benny and I were happy that we only had a short section to deal with. We enjoyed the smooth ride back down Rte 66 to the center of Northampton.