On Sunday, the annual COVAC ride to benefit the Amherst Rotary Club was held. There were four route options (25 miles, 50 miles, 75 miles, and 100 miles) and the NCC had over 20 members riding the 100 mile route.

Prior to the event, several of us agreed to meet for a 7:30 AM departure. Since the event started and ended at the Lions Club Pavilion in Hatfield, I rode the half mile from my house to the start line with my friend Steve.  We met James, Tom, John, Chris, and Henry for a NCC photo and rolled out a few minutes early. 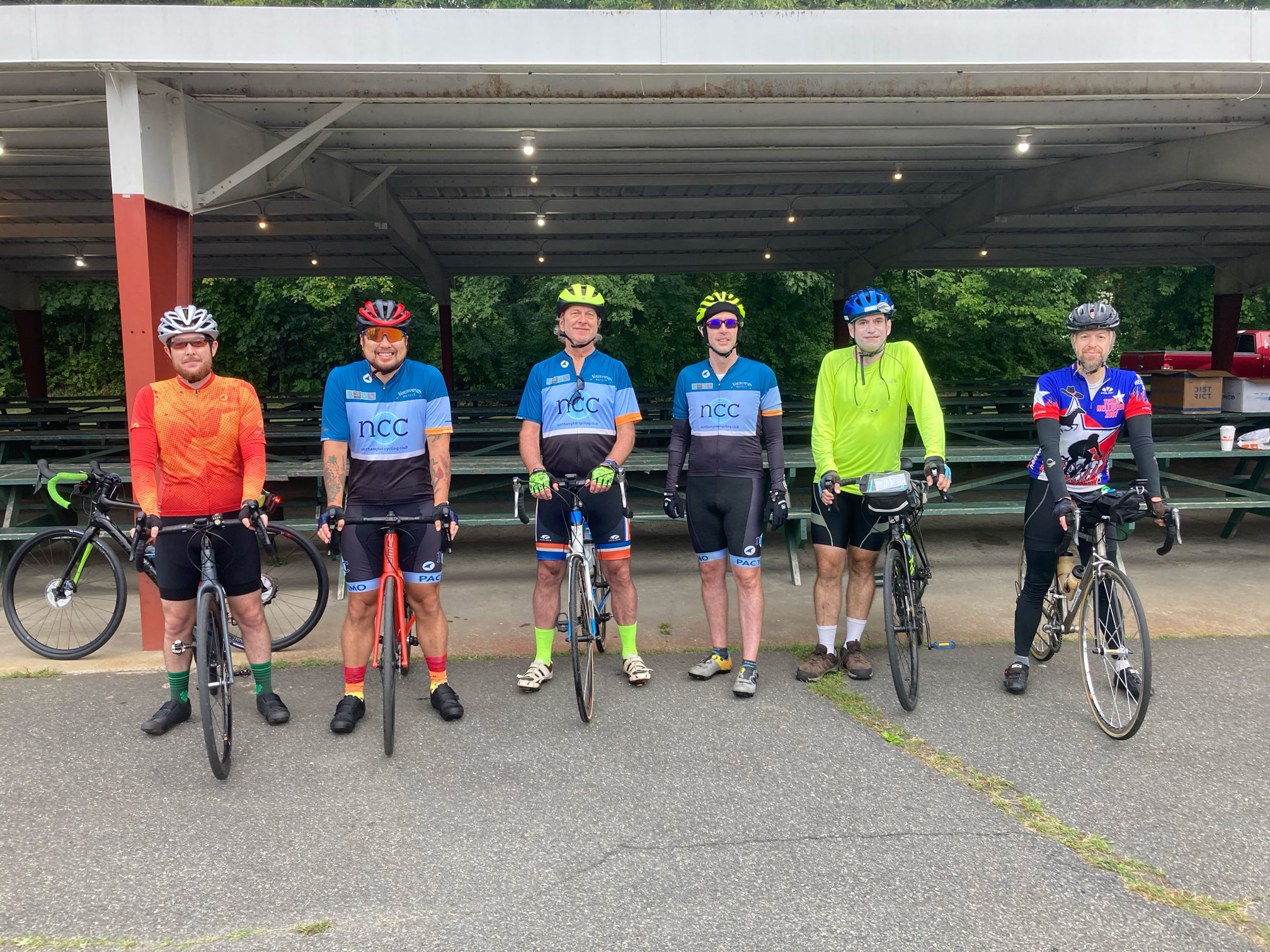 As we exited Billings Way, Don was riding in. He would catch us at the first rest stop in Deerfield. Our group of seven riders stayed together for the first two miles. As expected, Henry, who is very fast compared to the rest of us, started accelerating. As we approached the very short climb over I91 on Chestnut Street, I saw Tom circle back and pick something up. I later learned that Henry had dropped his cycling cap, which was in his back pocket. Tom was Henry’s hero for the day. Henry and Tom darted ahead and we never saw them again.

The first segment of the route was very familiar for NCC riders. We continued into Northampton and cut up to Look Park by way of Bridge Road. We scooted under the arch on Arch Street and wound our way to Whately.

As we turned by the Whately Inn, we waved to Tiffany, who was riding with a few friends. As we approached the Milk Bottle, my chain popped off. I was unable to shift it back on, so our group stopped briefly so I could put the chain back on. We kept going and made our way to the first rest stop in Old Deerfield. At the marathon mark (26.2 miles), it was nice to have our first break and some food. We saw a few more NCC members, including Peter, Suzanne, and Justine, during our break. 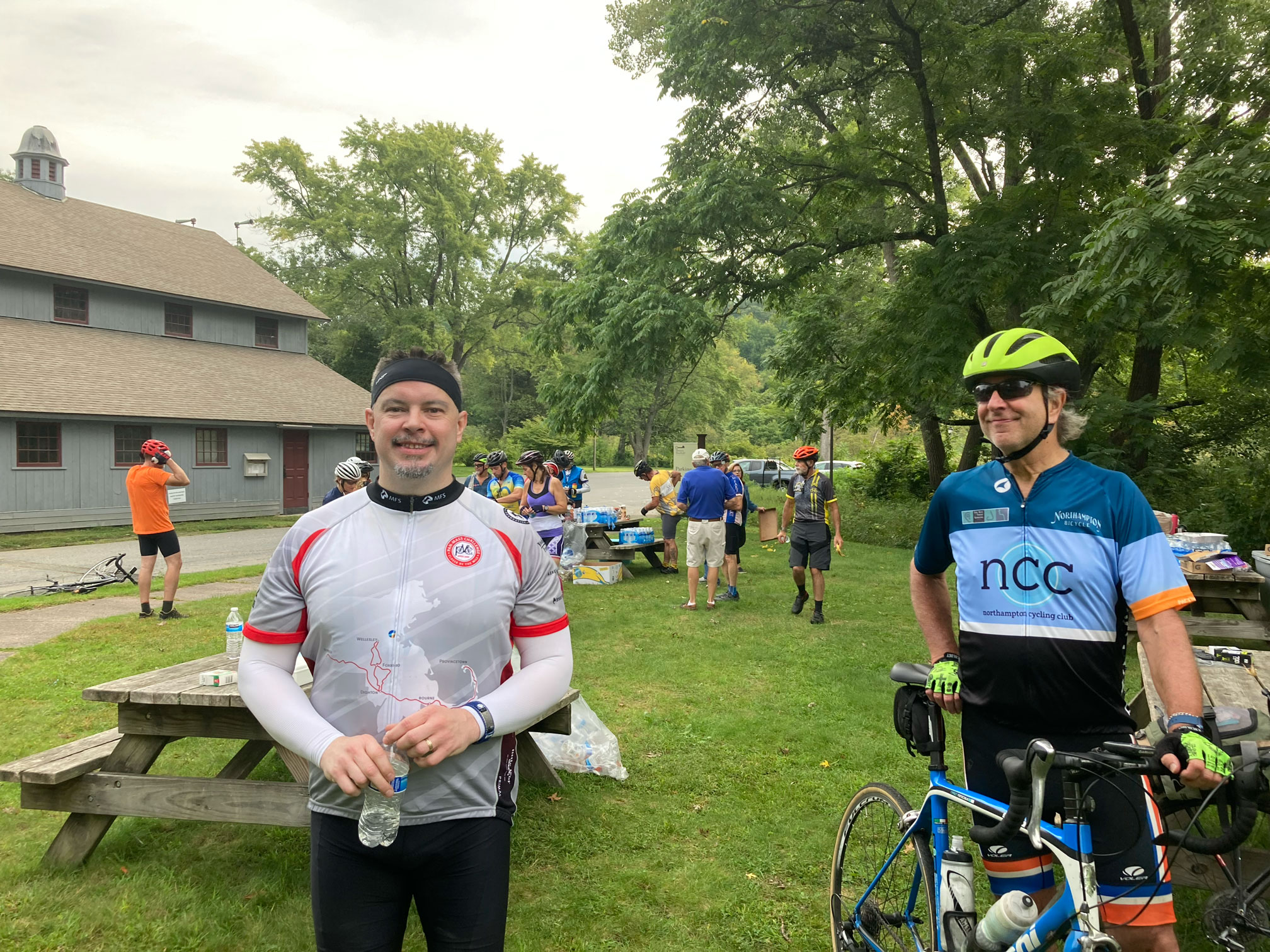 We resumed the ride and merged groups with a few more NCC riders, including Don. Juan and his group were approaching the Deerfield rest stop as we left Old Deerfield.

A few years ago, Lower Road’s pavement was rough, but now it is extremely smooth. Somewhere on Lower Road, we temporarily lost Chris. He miraculously chased on for five miles with the help of another rider and caught up with us in Greenfield.

Our group navigated the S curves as we descended to the Eunice Williams Bridge. Fortunately, there were no cars coming the other way on the one lane covered bridge, so we were able to sail across. After the ride, I learned that a rider in another group did fall on the S curves. 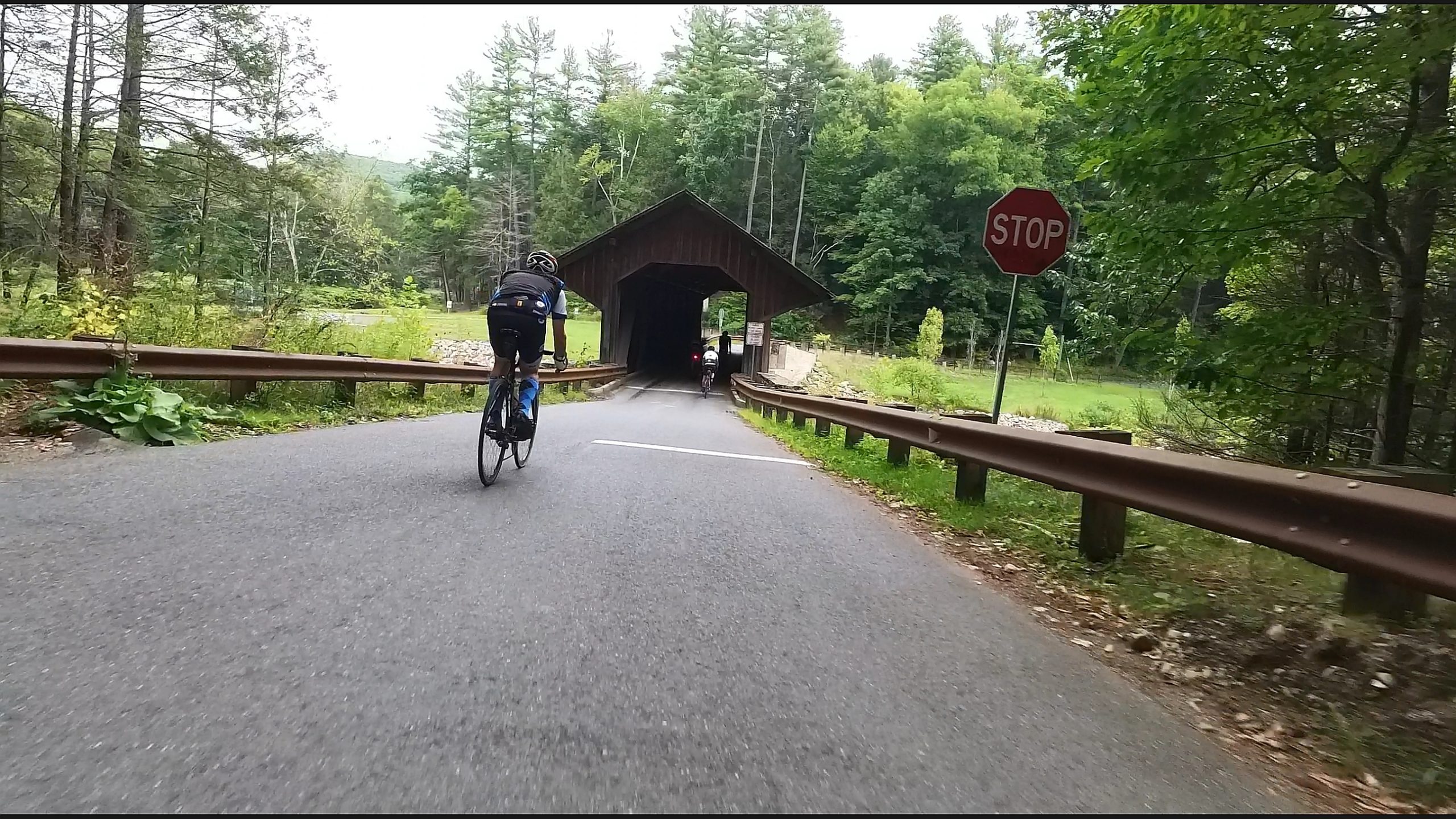 As we approached the turn onto Leyden Road, Don instructed us to go right. One rider mistakenly turned left and she and Don barely avoided a head on collision. Everyone was fine and we kept going. Barton/Upper Barton Road are filled with short climbs. The group did great. Chris let me know that Steve had fallen behind, so I soft pedaled so he could catch up. Multiple groups sped by in pace lines. As one group flew by, I saw a bottle get dropped. It was amazing no one went down. The group kept going; the bottle was less important than speed for that group!

In Bernardston, we navigated a few miles on Route 10, including a nice section with traffic barriers blocking the breakdown lane, before turning onto Mount Hermon Road/Route 142. The beginning of Mount Hermon Road includes the briefest stretch in Gill. You might be able to ride with your eyes closed and completely miss the Gill signs!

Around mile 52, we crossed into Vermont. Steve and I have a tradition of stopping at the state signs to take photos. 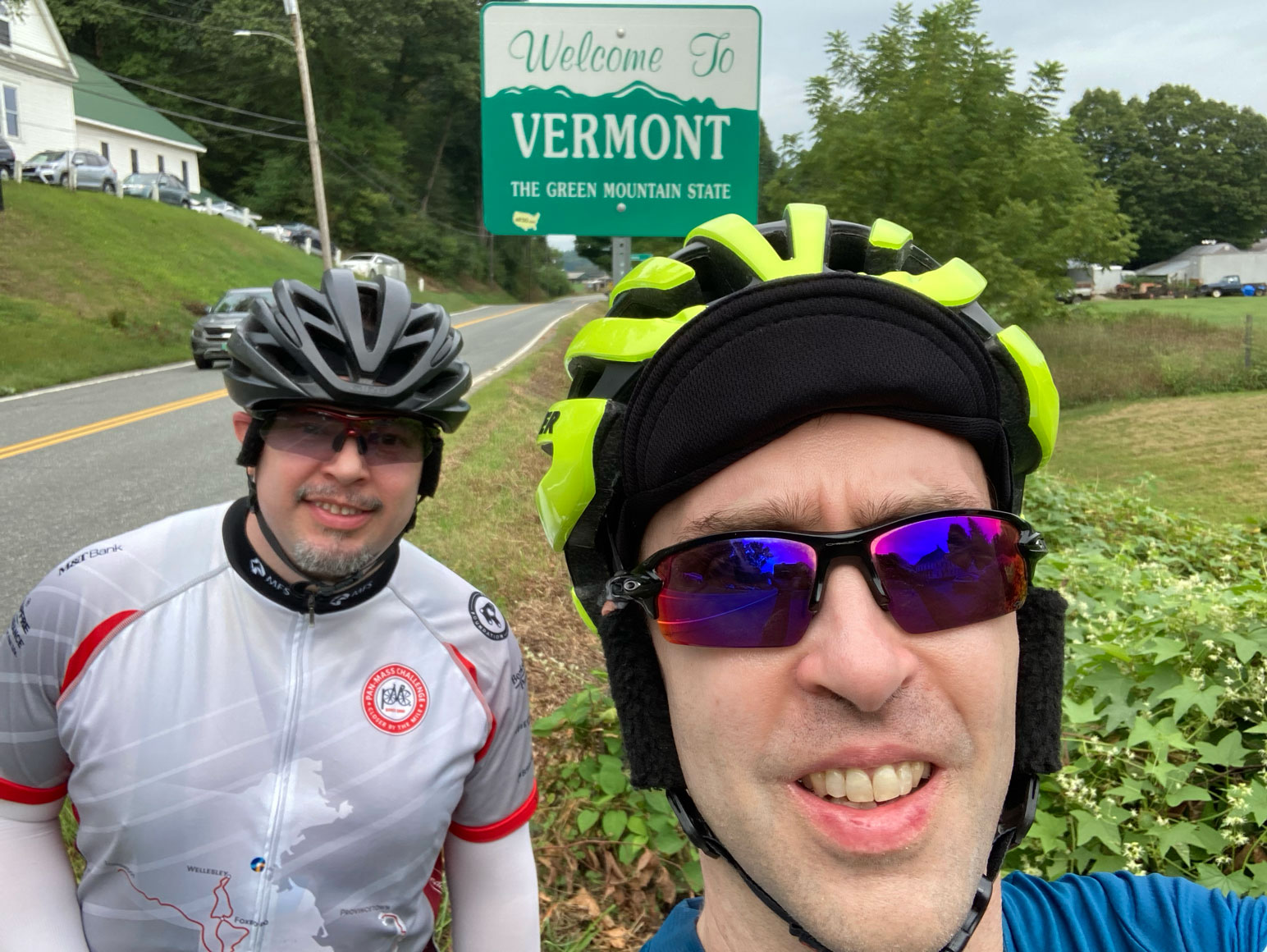 We navigated our way to Brattleboro. I’m always amazed at the lumber yards with giant logs that are being sprinkled with water. 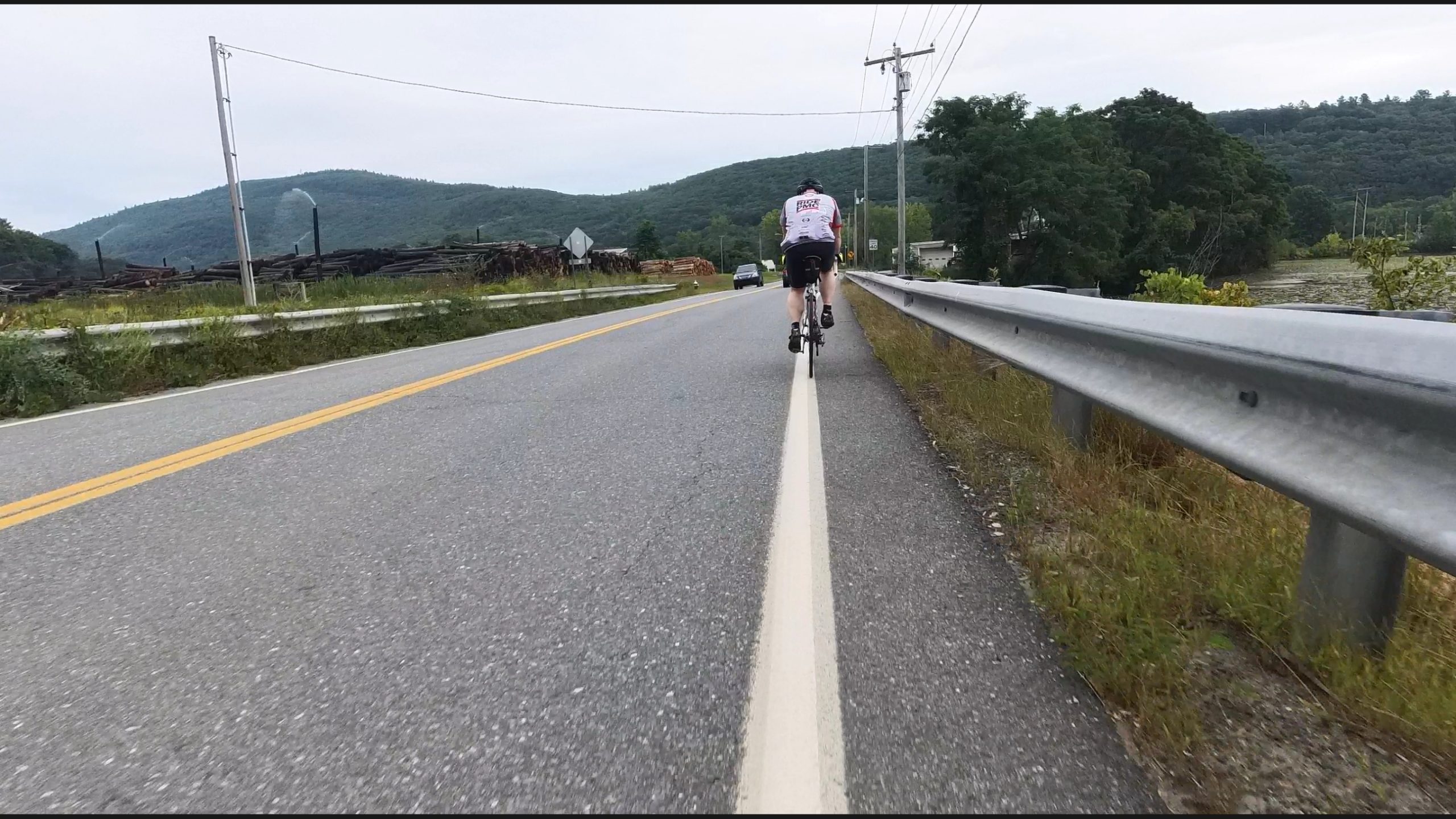 We crossed the bridge in Vermont and stopped in confusion. The “Welcome to New Hampshire” sign was missing! There was a lot of construction, so we guessed it was temporally removed. We took a photo where the sign should have been.

After riding over the New Hampshire bridge, we encounter Peter. His chain was had popped off and was stuck behind his small chainring. 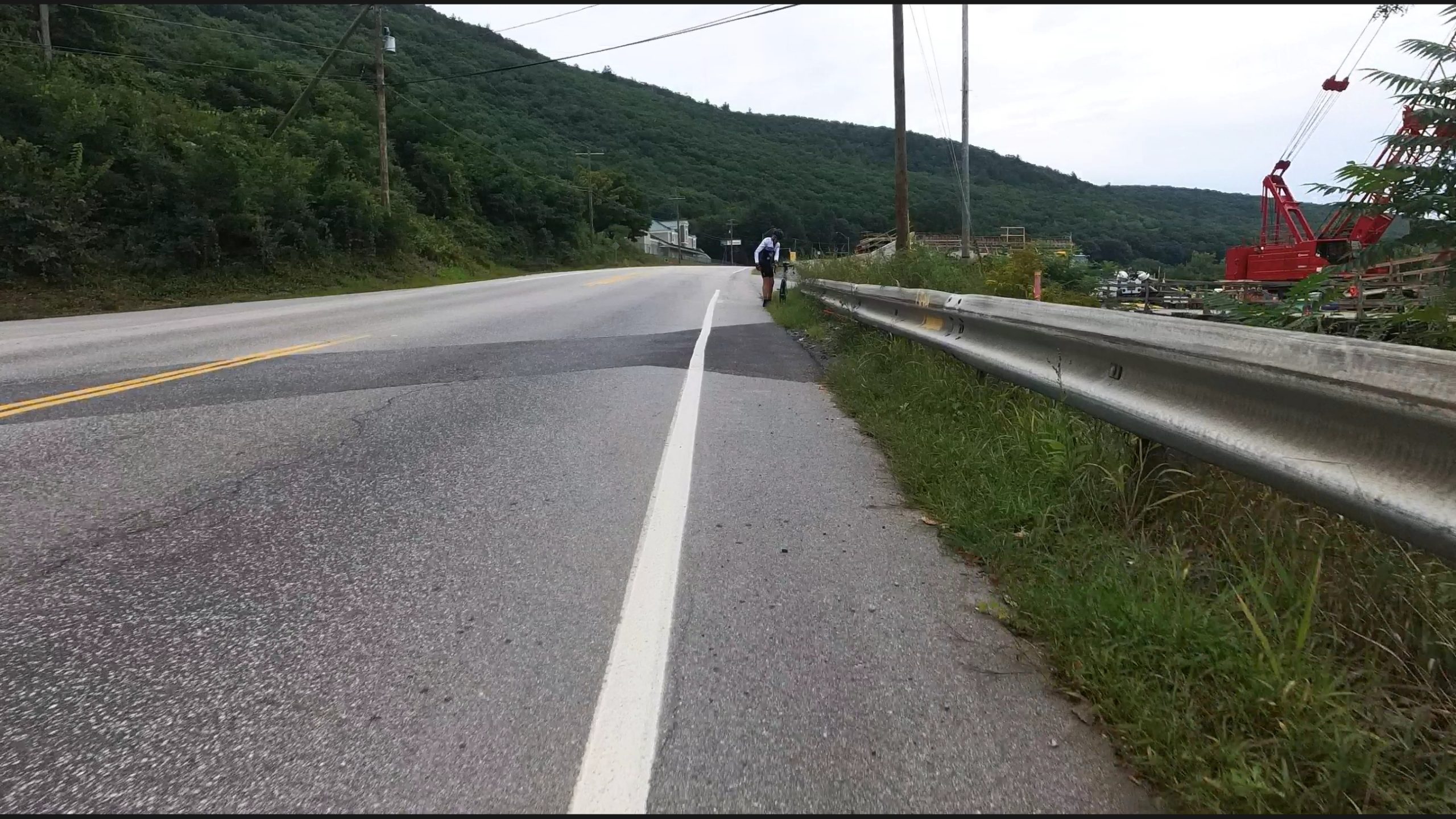 I would like to say that Steve and I provided our expertise and assisted Peter in resolving the issue. In reality, we only offered moral support. As I leaned over to help him by moving the rear derailleur, he go the chain loose and was back in business. It started to drizzle at this point, but we missed the rain that Massachusetts got.

I’m sure Hinsdale, NH, is a very nice town. That said, Brattleboro Road is a very interesting place. On this section, we could have purchased fireworks, liquor, tobacco, and a tour bus before stopping at the OTB. That would have created a much more interesting ride report!

At the 75 mile mark, we crossed back into Massachusetts! A few minutes later we saw the “Entering Pioneer Valley” sign. Steve had an issue with the fact that we were climbing a hill when we saw the sign for the valley! 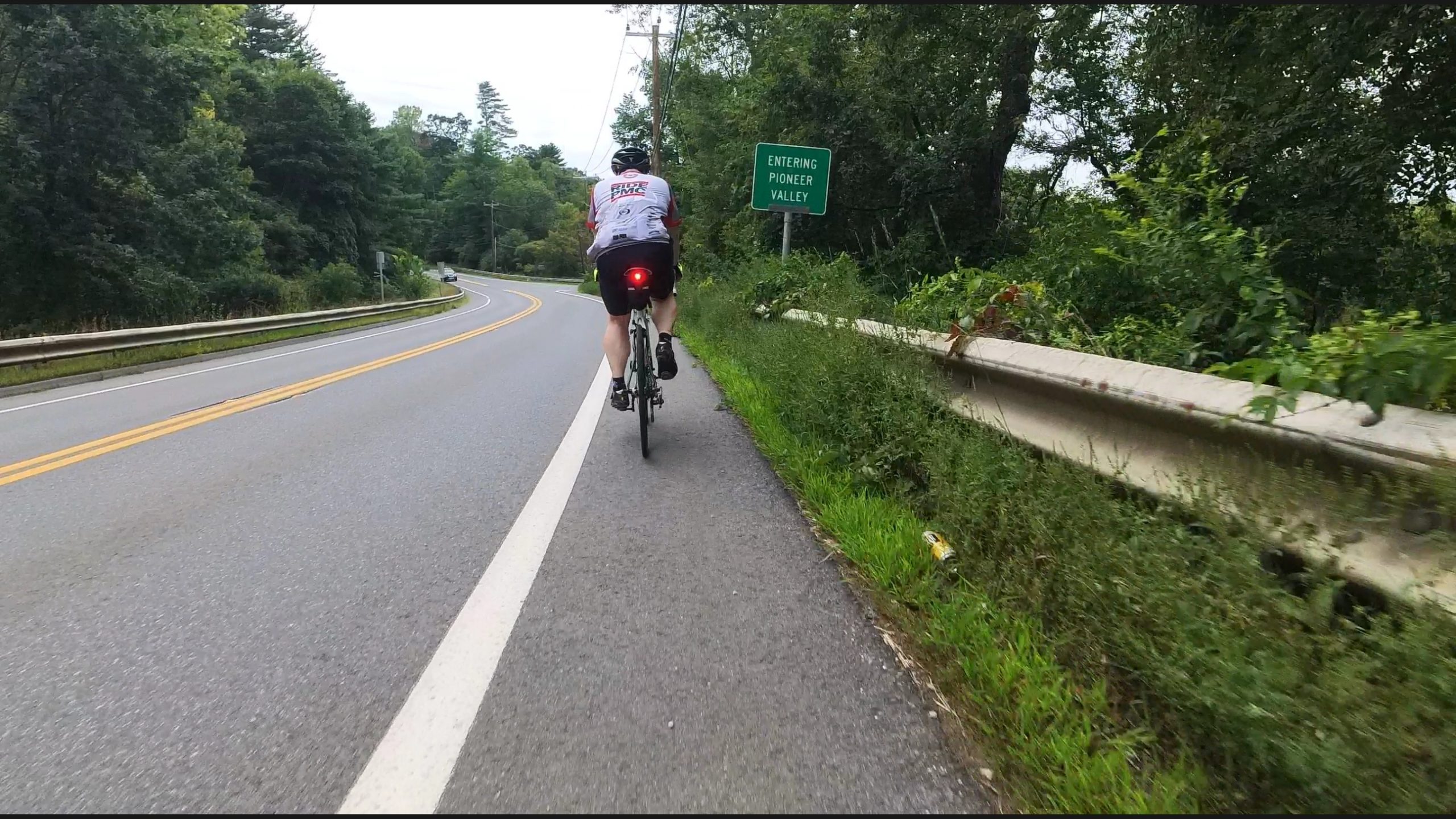 As we arrived at the final rest stop in Northfield, one of the many NCC groups was pulling out. There was a rider being patched up when we arrived. It appeared that the rider fell somewhere and had a bad case of road rash on the right side of his body. After patching him up, the support staff was going to give him a ride back to Hatfield.

After a slightly longer break, Steve and I departed for the final 22 miles. We were destined for the post-ride baked potato. As we cross into Sunderland, I was happy to see water flowing over the waterfall. With the drought, I was expecting the fall to be dry.

As we all know, River Road between Whately and Hatfield can be very windy. Fortunately, we did not encounter that today. Despite the brief drizzle, the overcast day was ideal for riding. 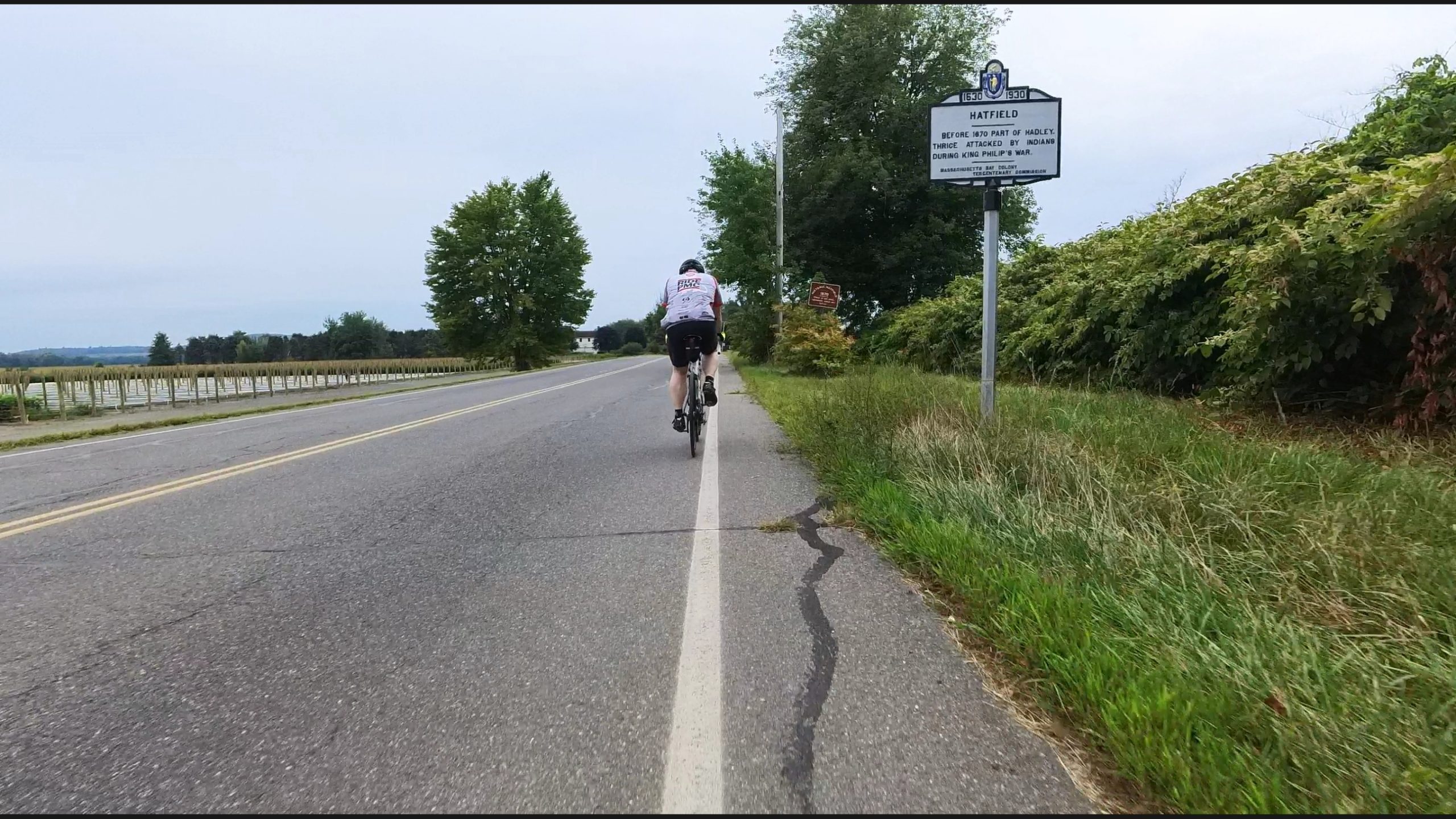 As we rolled into Hatfield for the final few miles, we did have to avoid some potatoes that were in the middle of the road. It is potato season.

It was great to complete the 105 mile journey. At the reception after the ride, we sat with a few NCC members and savored our baked potatoes. 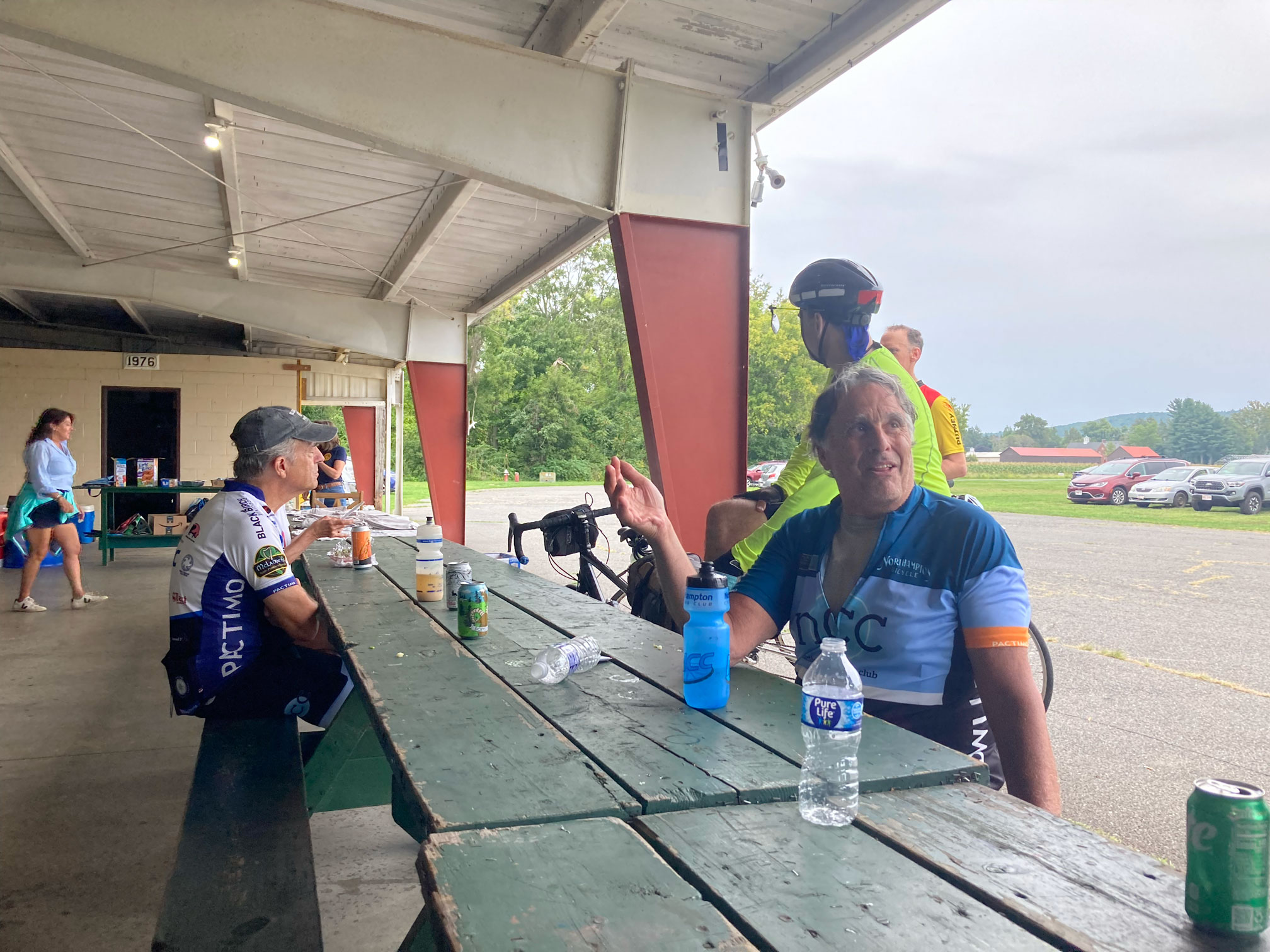