Five riders met at Pulaski Park for the Tuesday C ride of a new 25 mile route out past Puffer’s Pond in Amherst, returning by way of Cushman Market and Mount Warner.

After we negotiated our way past the trail detour to the river we were joined by a sixth rider who had let me know they’d be running late trying to make the ride, and at the turn to Comins one of the club’s more advanced riders hopped on and joined us for the central section, bringing our number up to 7 – actually a rather ideal size for one of the goals for the ride I had in mind.

As someone who has newly learned the skill of paceline riding from the club this summer, and sampled many of the club’s different rides, something that I’ve noticed is that while the Intro ride will often drill the concept of a rotating paceline, and something like the Wednesday Bookmill ride makes the paceline a matter of survival or getting dropped, it’s been less regularly a fixture of the C rides.  So expanding on the mention in the ride announcement, before we set out I explained that we’d be running a paceline drill when we reached route 47 and that a key goal of it was to make sure we rotated everyone through the front at least once in the four miles before the turn to Comins – so pulls would need to be short (maximum of a quarter mile or 50 seconds) rather than the “ride till you’d have to slow” that can work in faster groups.

Naturally there are plans, and then there’s reality, and everything from differences in expectations, to ill-timed cars back, to varying perceptions of time and distance, meant the first run through the rotation was a bit rough. And although I mishandled even my own initial turn up front trying to decide what to do about a cluster of cars on our tail right as (and continuing long after) I started looking for an opening to drop back in accordance with my own request, I ended up channeling a drill sergeant a bit more than I’d really intended to trying to get the idea of early rotation sorted out.  But, fortunately, after the first run-through things settled in and the paceline mostly ran itself – it was a strong group of extremely capable riders, so only a matter of developing common understanding, and of course much of that traces back to the person explaining the intent.

Pulpit Hill Road took us towards Puffer’s Pond, and the road around its south side provided some views of the pond and a number of comments to the effect of finally seeing something that had been a local feature of vague awareness.  Alas, it turned out we were enjoying playing tourist a bit too much, because what had sounded like a twig caught in someone’s spokes, and been dismissed as trivial by the suffering rider, actually turned out to be a bit more of a delaying chain issue subsequently leading to a missed turn.

Note to self: there are no mechanicals minor enough to be dismissed, no matter what someone says (and yes, I’ve been the rider saying “go on, I’ll catch up” too).   As individual riders we don’t want to delay the group – but as a leader who feels a duty to keep the ride together, it really is the right choice to either wait, or else make a specific and communicated plan.  By the time I noticed that our faster guest rider was no longer with us, we were near the exit of the pond area.  And there I made my second and potentially far more serious mistake: never let a strong rider who doesn’t know the way home volunteer to go search for a dropped rider who knows it well when sunset is on the line.  Looking at the clock relative to that sunset, I figured we had about five minutes until a decision deadline, and dreaded the choice that would be.  But fortunately well before that was up, our dropped/missed-turn rider appeared riding back towards us from ahead, and then soon thereafter our searching rider returned from the rear.

Happily re-united we headed south, where an oncoming car of ambiguous intentions lead to our skipping the planned left and going the longer way around the triangle to the picture stop at Cushman Market. 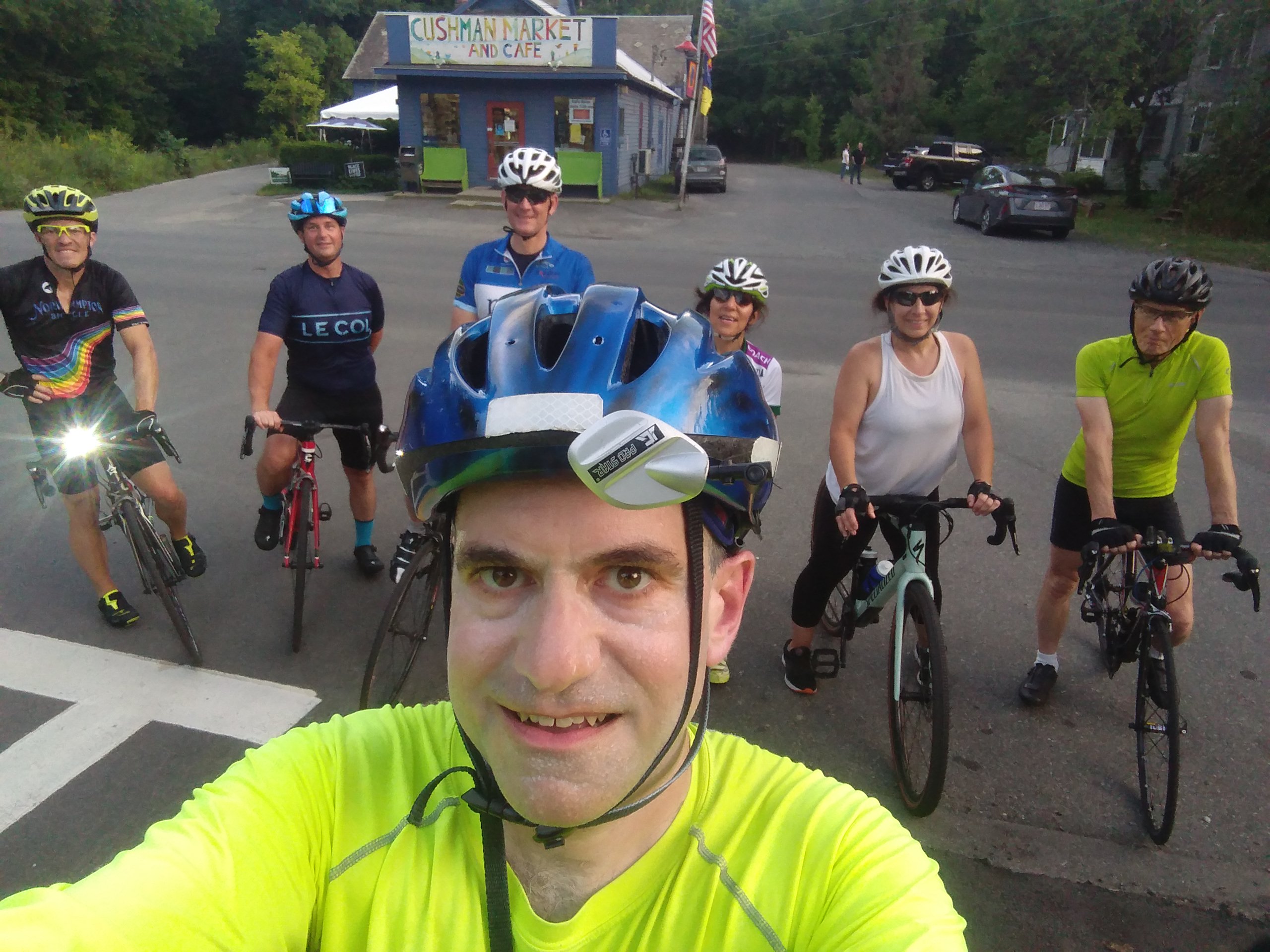 And then the race against sunset for home was on!

One of the tradeoffs I’ve been working on is when to lead from the front, vs when to embed in the ride like any other participant.  In areas of lower turn density, I generally prefer to let the lead position informally rotate, and especially on climbs to be able to adopt a bit more a sweeping role.  Though that does mean a bit more shouting forwards of turns than perhaps ideal – either way, there are tradeoffs, and I feel like I ended up making every mistake at least once – all of sitting too long at the front, shouting too may instructions forward, and charging up to resume the lead, only to realize that the turn I was doing that for was still a solid mile off.  Compounding things, at some point on the ride homewards I realized that I’d erroneously set my phone to follow an earlier draft plan for the route rather than the final one, so became accustomed to ignoring its “wrong” instructions.  Unfortunately navigating from memory and a partial cue sheet also meant I dismissed some rather sound advice from our regionally aware ride members, and accidentally sent us towards the far steeper climb of Breckinridge rather than making the turn needed to continue on gentler Mount Warner Road as planned.  But since the last of us we were 9/10 of the way up the 10% climb by the time my error was made completely clear, and had only a half hour left until sunset, I made the call to forge on and return via Huntington, rather than past the Lake Warner Boat Launch as planned.

Our guest rider departed as previously agreed to instead head north on 47 while the group turned south.  Some rather substantial and gusty headwinds made the paceline useful, and longer contributions from the front were finally something to be appreciated.  We were communicating well, and I was enjoying how those who peeled off were amply clear in advance of their intentions (our Damon road joiner naturally stopped there as well) until disaster struck.

After crossing near the rotary with the aid of the dubious white pushbutton flashers, my rearview mirror count indicated we were a rider short.

Pausing and turning to look back, I thought I saw in the middle of the first crosswalk every ride leader’s second worst nightmare – a rider righting their bike after a crash, trying to re-attach displaced accessories.

Calling an emergency halt, I salmoned back and re-crossed to assist, only to discover amidst the first island a rider who had simply paused and bent over to adjust lights.

From joy at a successful conclusion, to momentarily nightmare scenario, to back to wishing everyone a good night as we each peeled off in our clearly explained final directions… that’s how it went