Although not an official club ride, six club members and two “joined at the top tube” visitors met behind the Sunderland Library this Sunday for a relaxed-C sort of tourist ride through Franklin County.  Being my usual stubborn self I’d planned the ride with just enough time to bike, rather than drive form Northampton to the start, but then set out later than I should have, picking up a few PR’s on 47 north and rolling in to the starting point a mere minute before the announced 9:30 am ride departure.

After going over the route we set off in a loose and relaxed line, getting an initial sense of one another.  The falls of Falls Road were a bit disappointing in these drought conditions, but not long after at the base of Old Sunderland Road we (by chance or plan, it was never clear?) came upon Don, who opted to ride along with us past the Bookmill and up to the Lake Pleasant Bridge of Names.  Perhaps with the disappointing state of the Falls Road falls, or just being so early in the ride my inner tour guide was slightly disappointed that no one really wanted to descend to view the river from the Bookmill dining deck, so we continued north, braving the brief gravel stretch of Old Northfield.  Riding in sweep mode I caught up with the main group engaged in enthusiastic confab at its northern terminus, and rather bluntly suggested we move the break the additional hundred yards to the intended Lake Pleasant Bridge of Names tourist opportunity. 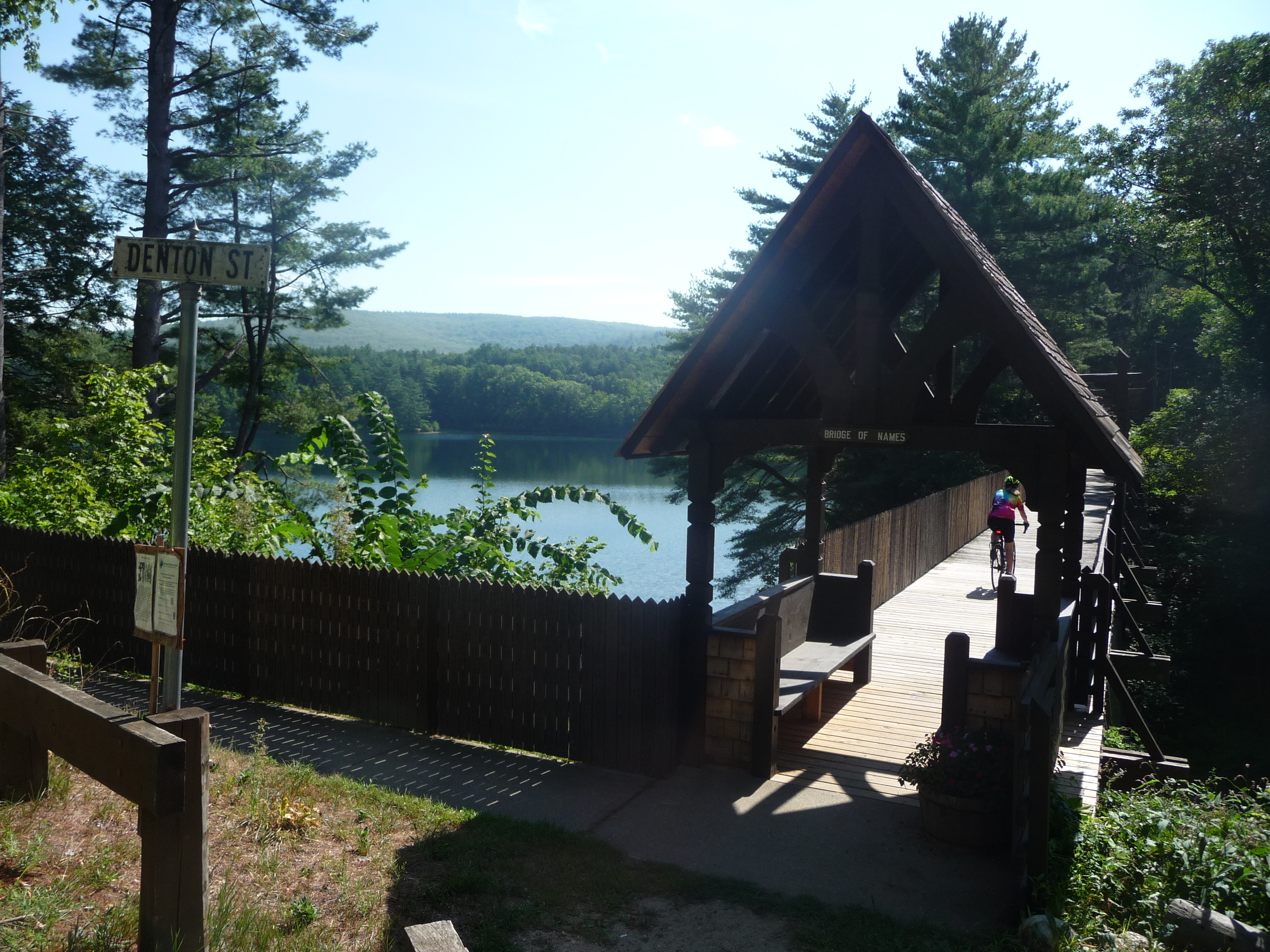 After the break Don departed for his own more time-constrained ride, and after discussing but opting out of the climbier route across the bridge, the main group did the smaller climb back to Lake Pleasant Road in anticipation of the turn onto newly repaved East Mineral Road.  At least one of our number had experienced its former condition and enjoyed the contrast, probably the group would have enjoyed the descent more if I hadn’t overdone the safety speech about the possibility of people walking on or biking up the curving hill.  We did get passed by a car early on, which had in previous visits seemed like a mere theoretical possibility.

Cabot’s Camp waited at the conclusion of the descent, as one of the planned high points of the ride, so we took a group picture at the little bike walk bridge there, with the impressive arch of the French King Bridge that carries route 2 in the background. 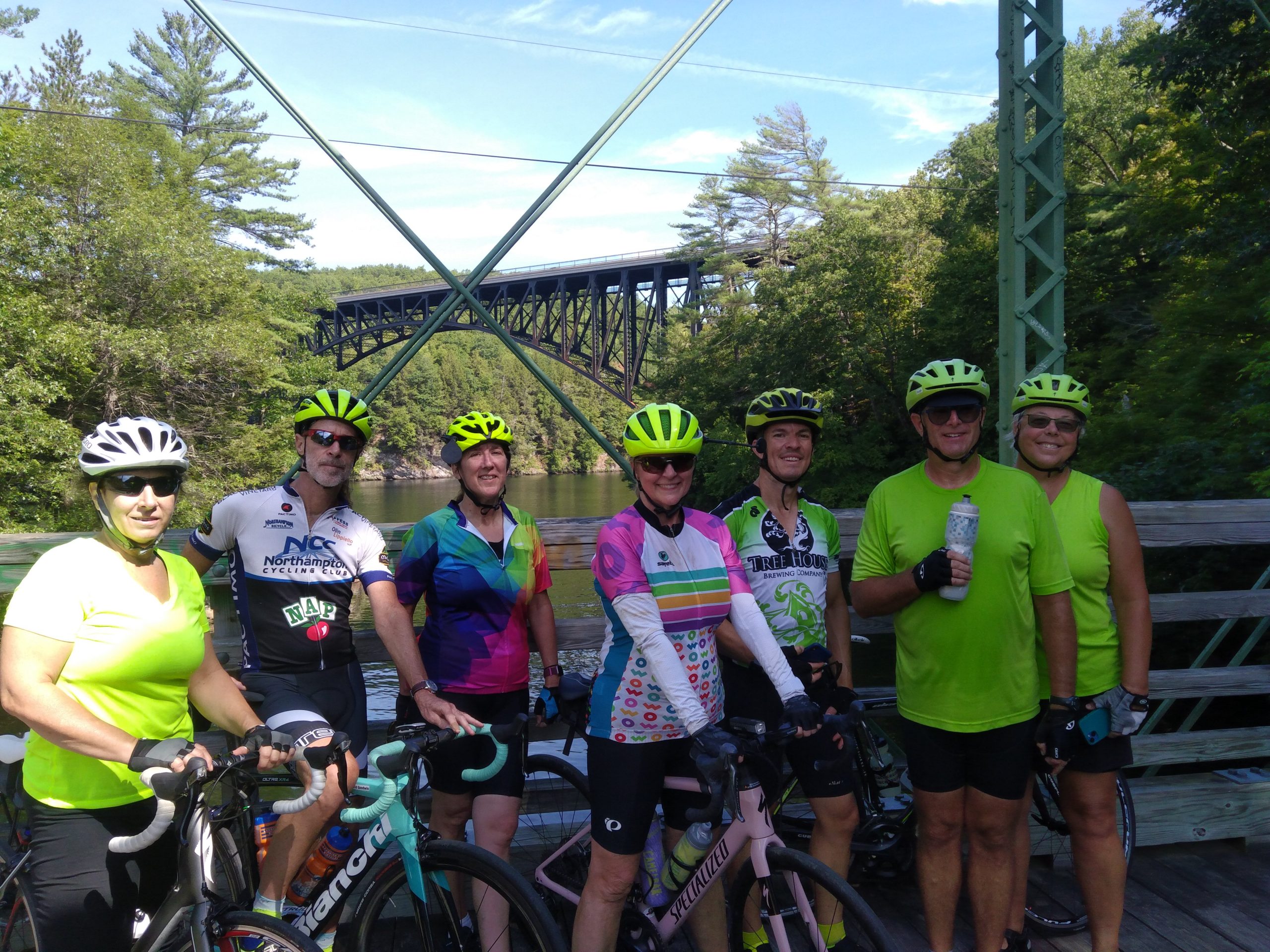 We then took the easier climb out of Cabot’s Camp on Dorsey Road through the village of Miller’s Falls.  I have to admit I have a tendency to remember only the “big” climbs of a route and not the little ones, but there are some there that are notable in the moment.  Especially as I’d managed to flub the route with an unnecessary climb of High Street before descending back to the route 63 bridge, and was too far back to fix that at the moment the mistake became apparent.  Still, we survived, and before long began the long general trend of descent towards Turner’s Falls.

Upon reaching Unity Park, some of us began the critical (if unsuccessful and ultimately unnecessary) search for a water source.  Others decided to amuse themselves.  To quote one group member “This is what happens when boys are unsupervised” 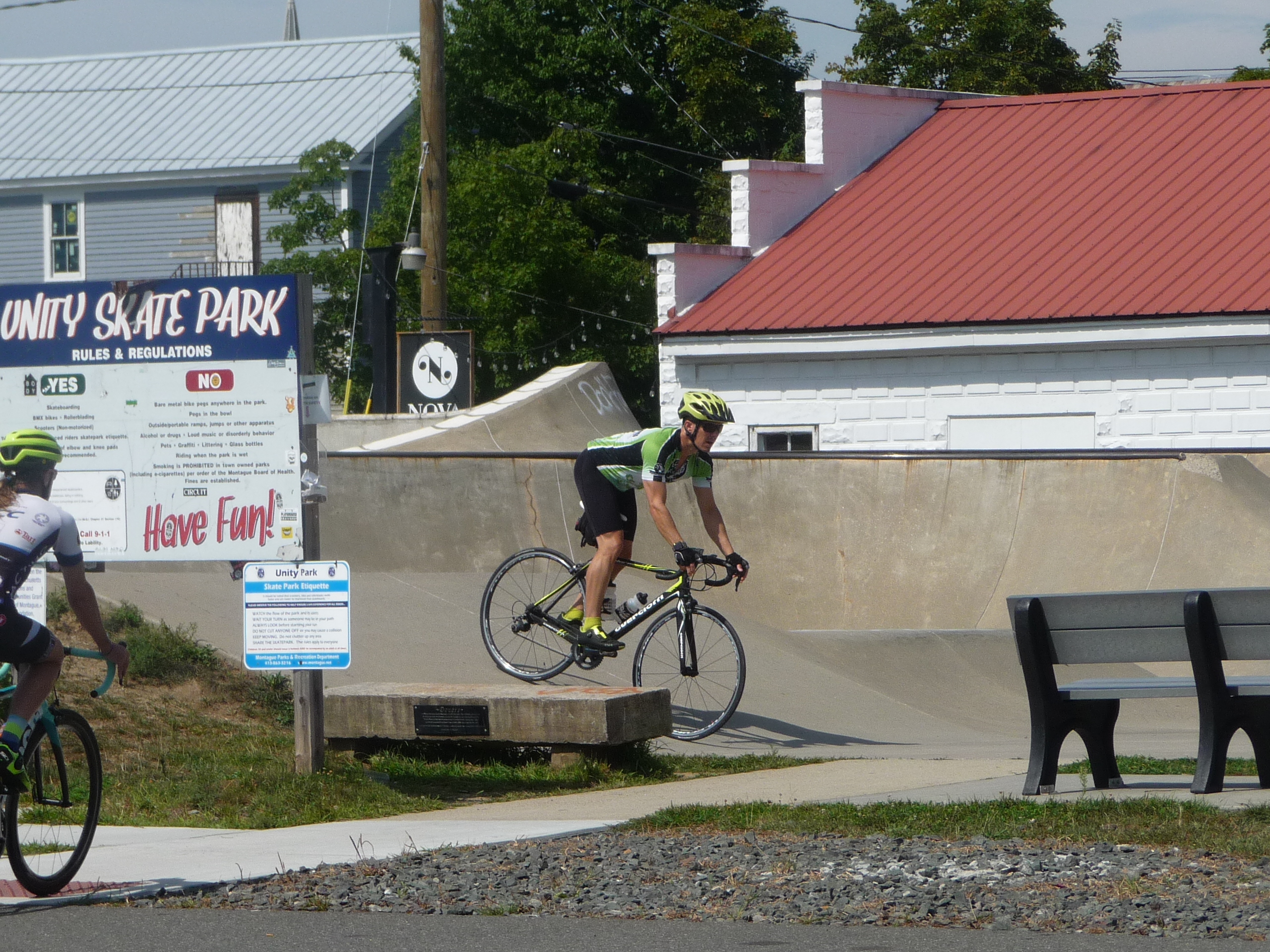 (FWIW I zoomed in on the rules, and unless there are pegs on that road bike, it’s apparently allowed)

User flow on the Canalside Rail Trail through Turner’s Falls was light so we had no problem fitting in.  The river from here up to the dam at Vernon, VT is under complete human control, and the water level in the power canal was as high as usual, but the flow was nearly nil.  Usually you can see an impressive current and in places patterns of standing waves seemingly threatening the low abandoned rail bridges, today it just looked like a lake.  Riding in a semi-sweep mode, I was getting used to this sort of view of the ride: 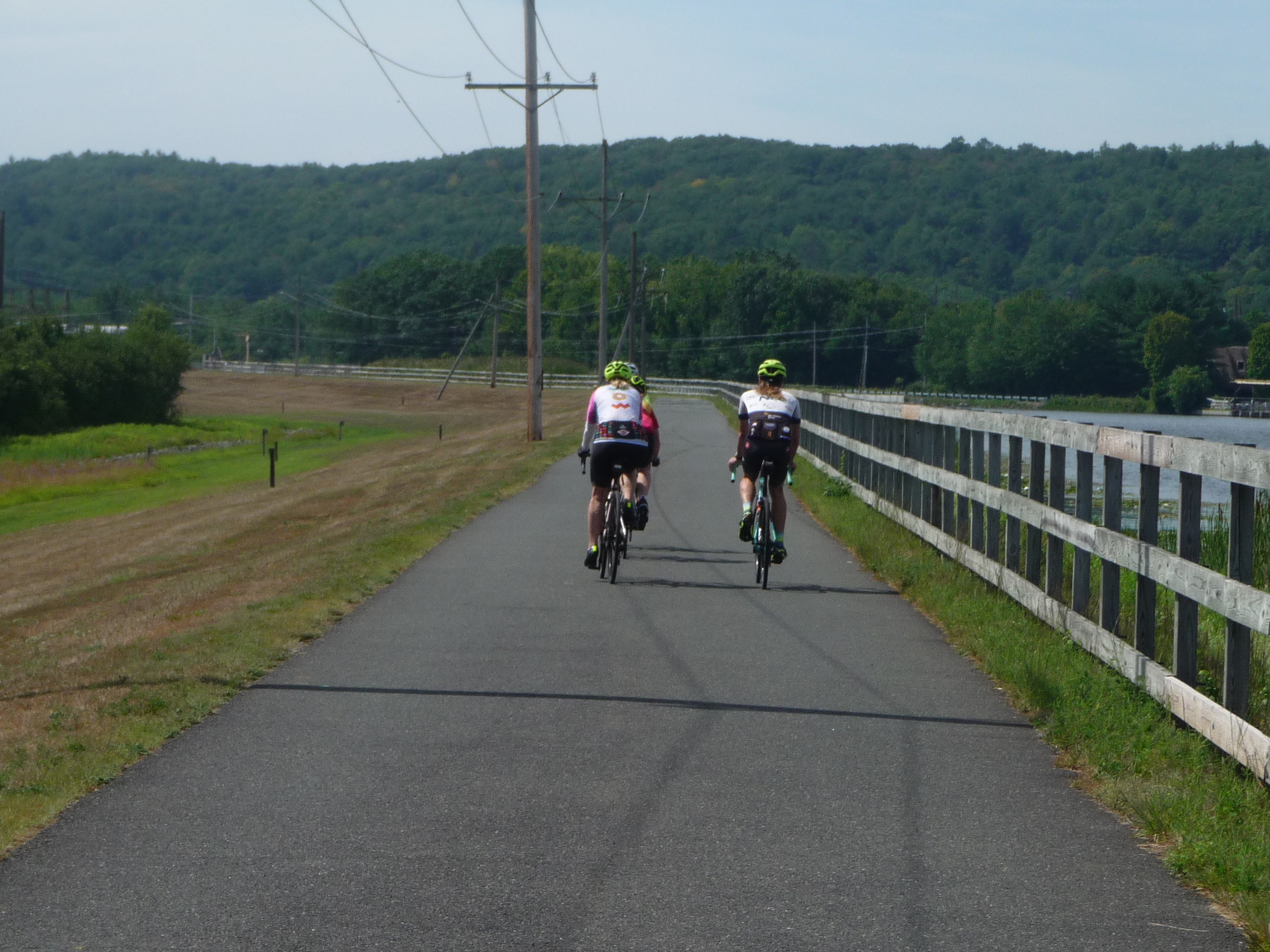 After the power canal we crossed the Connecticut River on a former rail bridge, and I got to play tour guide again explaining how while the west span is original, the eastern two are replacements for those knocked over in the flood of 1936 by a washed out wooden covered car bridge floating downriver.  That bridge continued further down to destroy the predecessor of the 116 one as well, and crossing back at the conclusion of the ride I notice some ironwork sticking out of the river downstream that might be a sunken remainder. 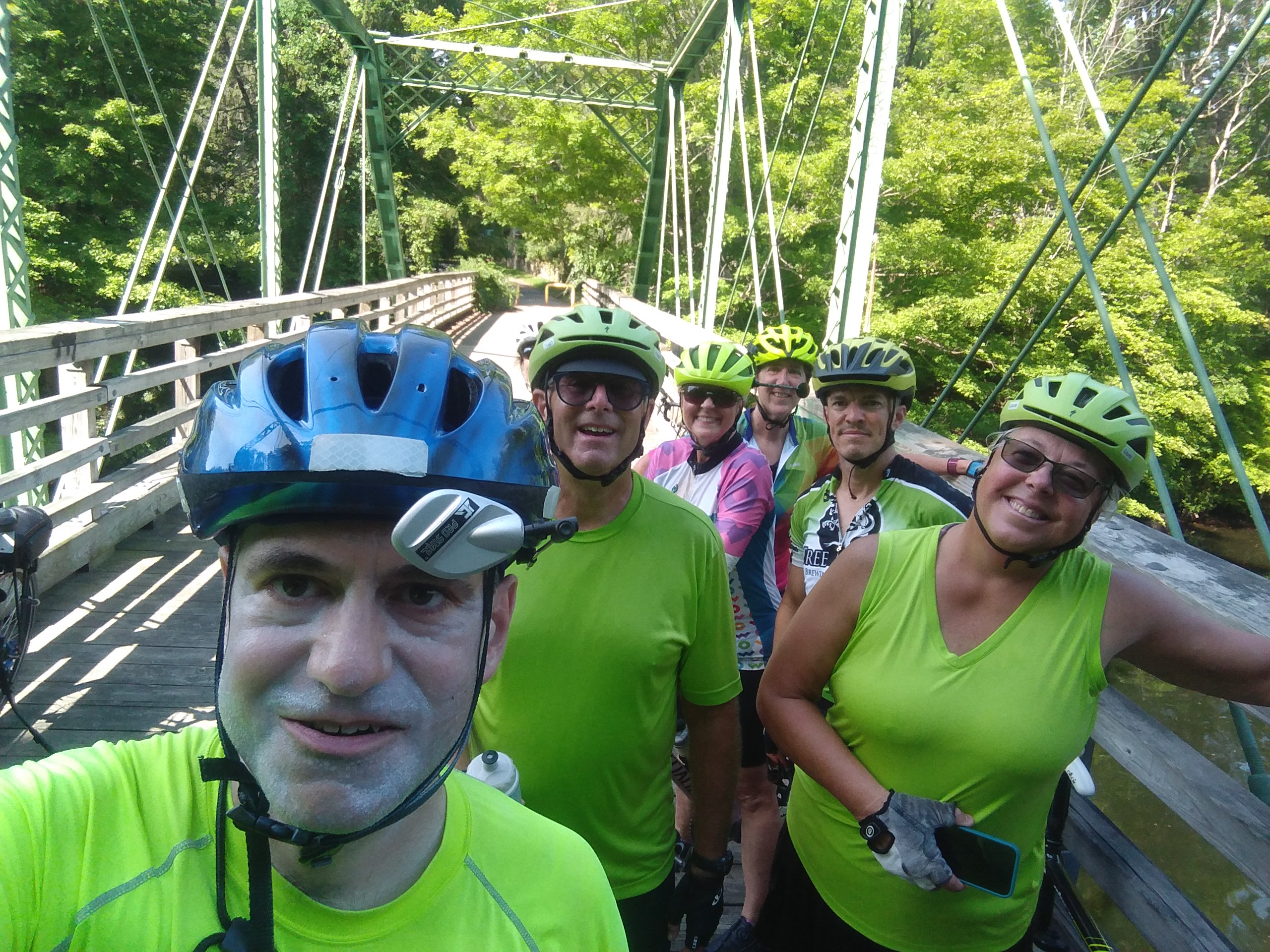 Crossing to the Deerfield bank committed us to a more strenuous ride back, so I made a point to discuss that fact and confirm everyone was up to it, but no one seemed interested in taking the easier route back on the east bank.  So we finished the trail, passed the railyards, and tackled the rolling hills south.   Several previously climb-challenged riders really distinguished themselves with performances here – it’s been a summer of a lot of riding, and the progress made really shows!   I found I could generally adopt a bridge position, with a rear blinker just visible ahead, and the last rider’s intermittent front strobe just visible behind, and stayed in that mode south.  Nearing the conclusion of the group ride, I noted both the majesty of Sugarloaf as seen from this perspective and the sorts of territory we were riding through. 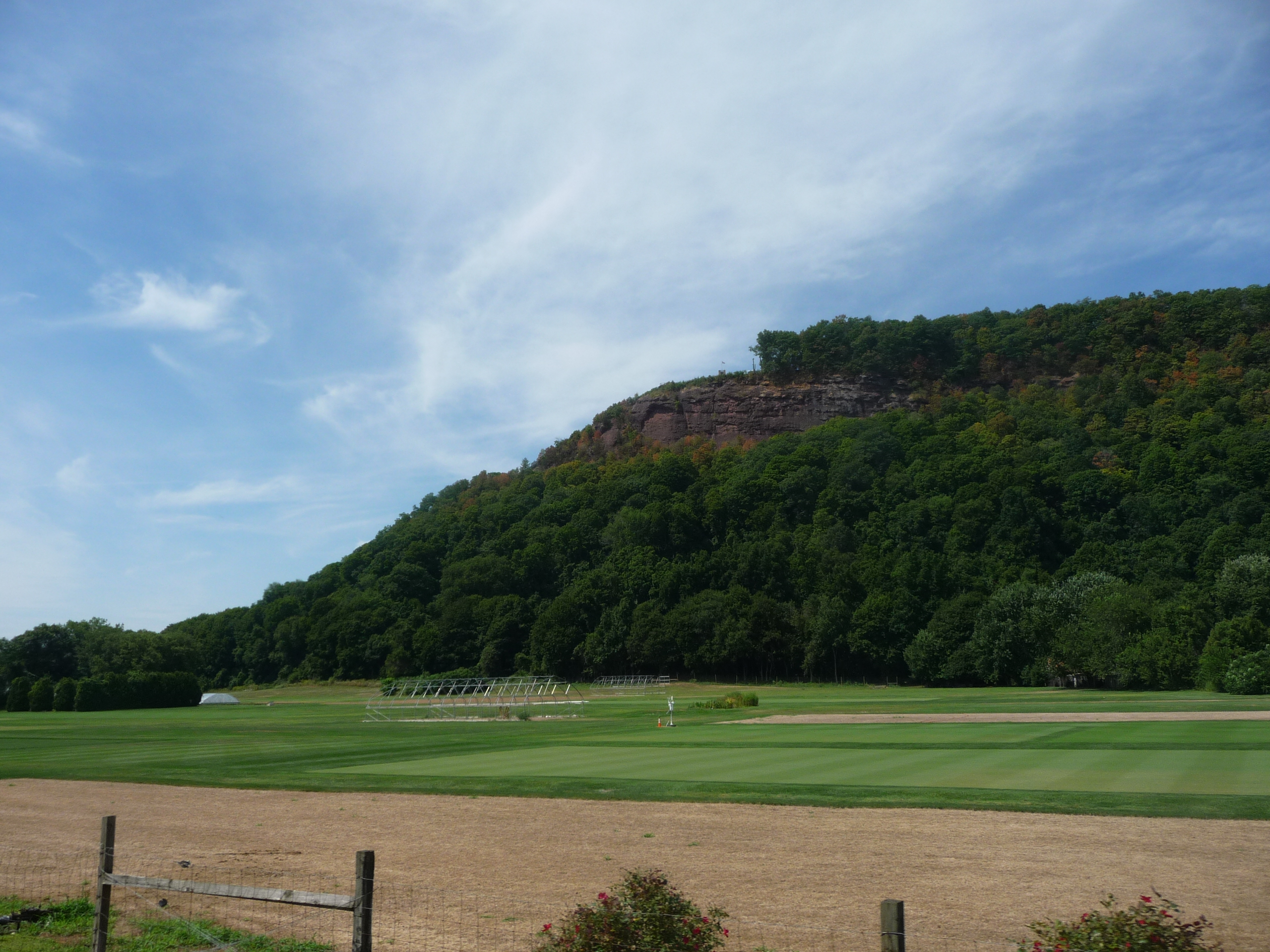 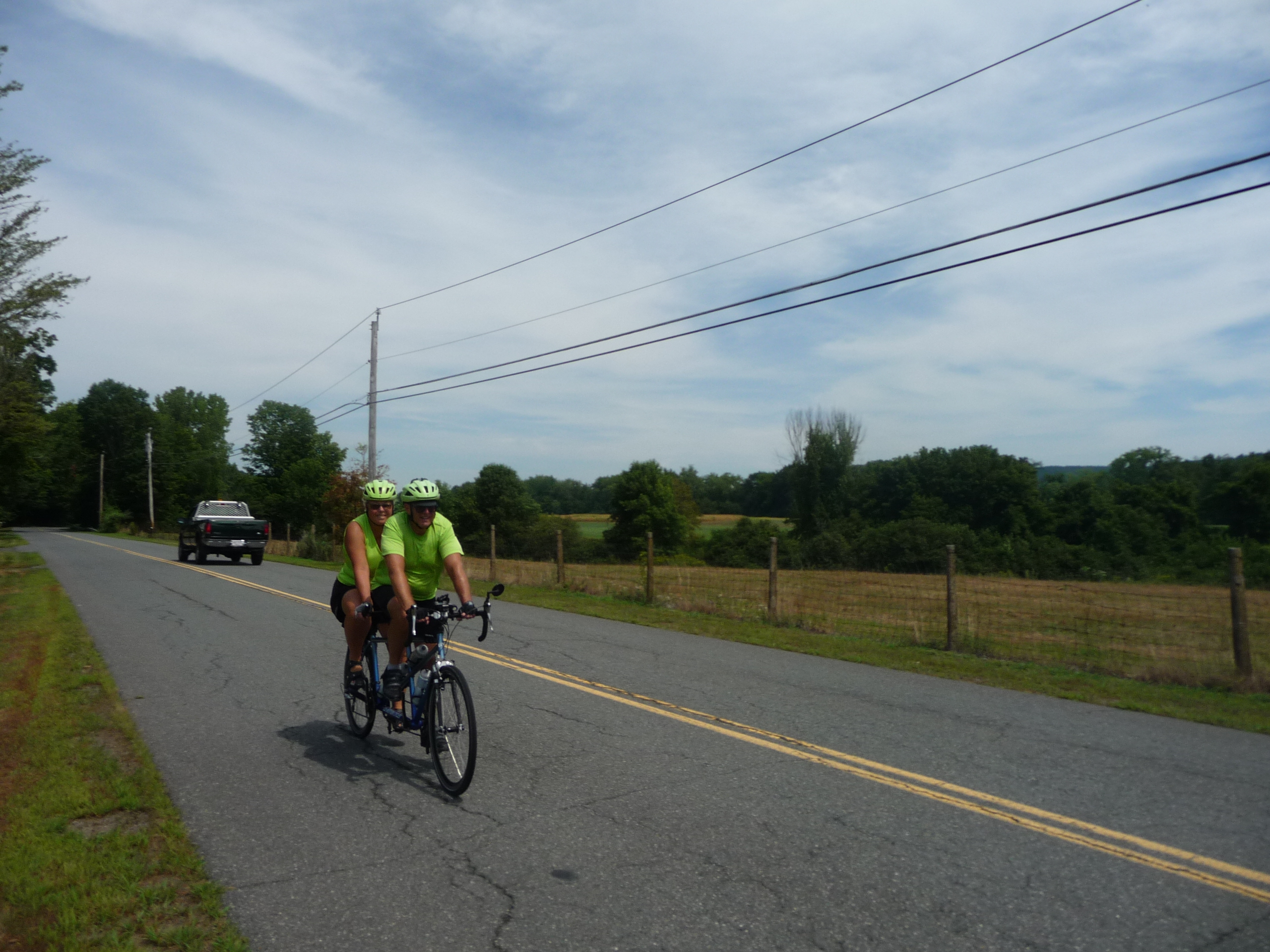 As is sadly typical we managed to loose a set of riders at the left from River Road to 116, but fortunately noted that, so sent the group on and waited indicating (usefully or not) when a vantage higher up the bridge hill indicated a lack of traffic from the left.

One of our strong riders had chosen is own way back from Turner’s, and the other departed at the conclusion of the run south on the Deerfield bank, but six of us returned to the starting point to debrief and agree it had been a fun ride.

I’d assumed I was going to need a refill, but still had most of a bottle remaining and so on the strength of that set off back down 47 for home, though I’ll admit I was taking things easily by then and opted for the first access to the trail.