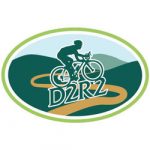 Saturday was the annual Deerfield Dirt-Road Randonnee (D2R2). D2R2 is a fundraiser for the Franklin Land Trust, which is a non-profit organization in Western Massachusetts that assists farmers and other landowners who want to protect their land from unwanted development.

The event drew close to 1,600 participants dispersed across seven route options (family ride, Green River 40K Tour, 100K, 115K, 160K, 180K, and the Mystery Ride). The Northampton Cycling Club had well over 45 members participate with representatives in each route. There were many NCC jerseys on course today!

I rode the 100K route. We had over 24 NCC members riding this route. Prior to the event, we attempted to coordinate for a group photo before beginning the adventure. With warm temperatures predicted, many members opted to start early, but we had seven for the group photo, including Charlie, our former president, who was determined to ride despite his recent broken hand! 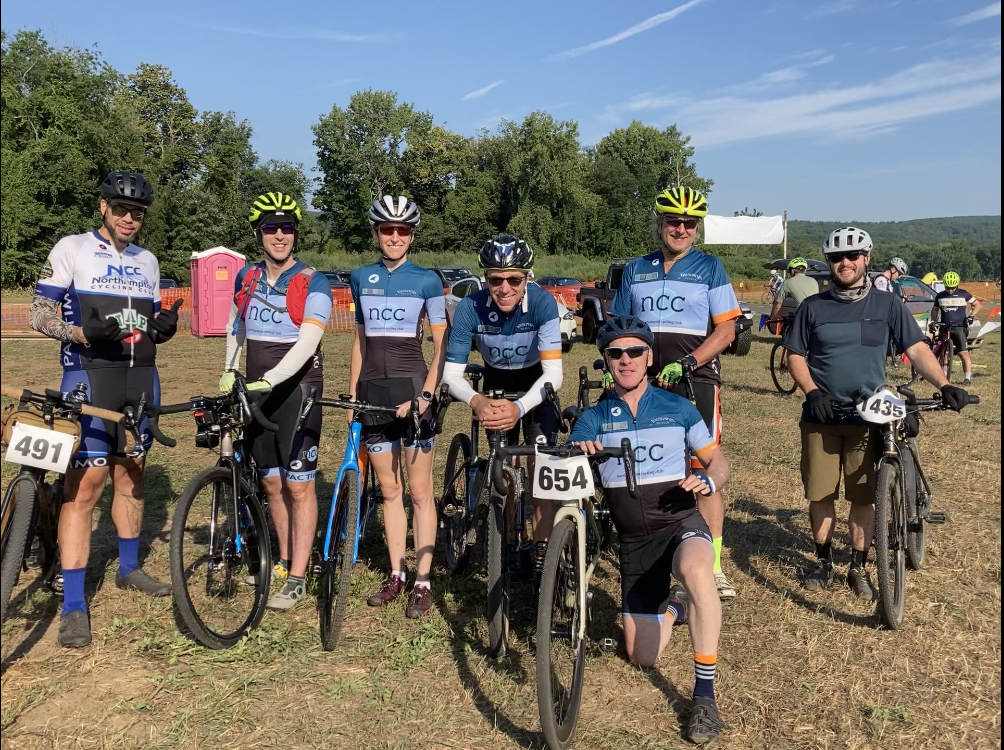 We rolled out as a group around 9 AM. As expected, Old Albany Road was challenging. Melissa and John both tipped over at low speeds. John and I decided to take it slow. We even walked a few of the deep and loose gravel sections as there was no reason to end our day early with an injury only a few miles from the start. The rest of the group powered on and we did not see them for a while. 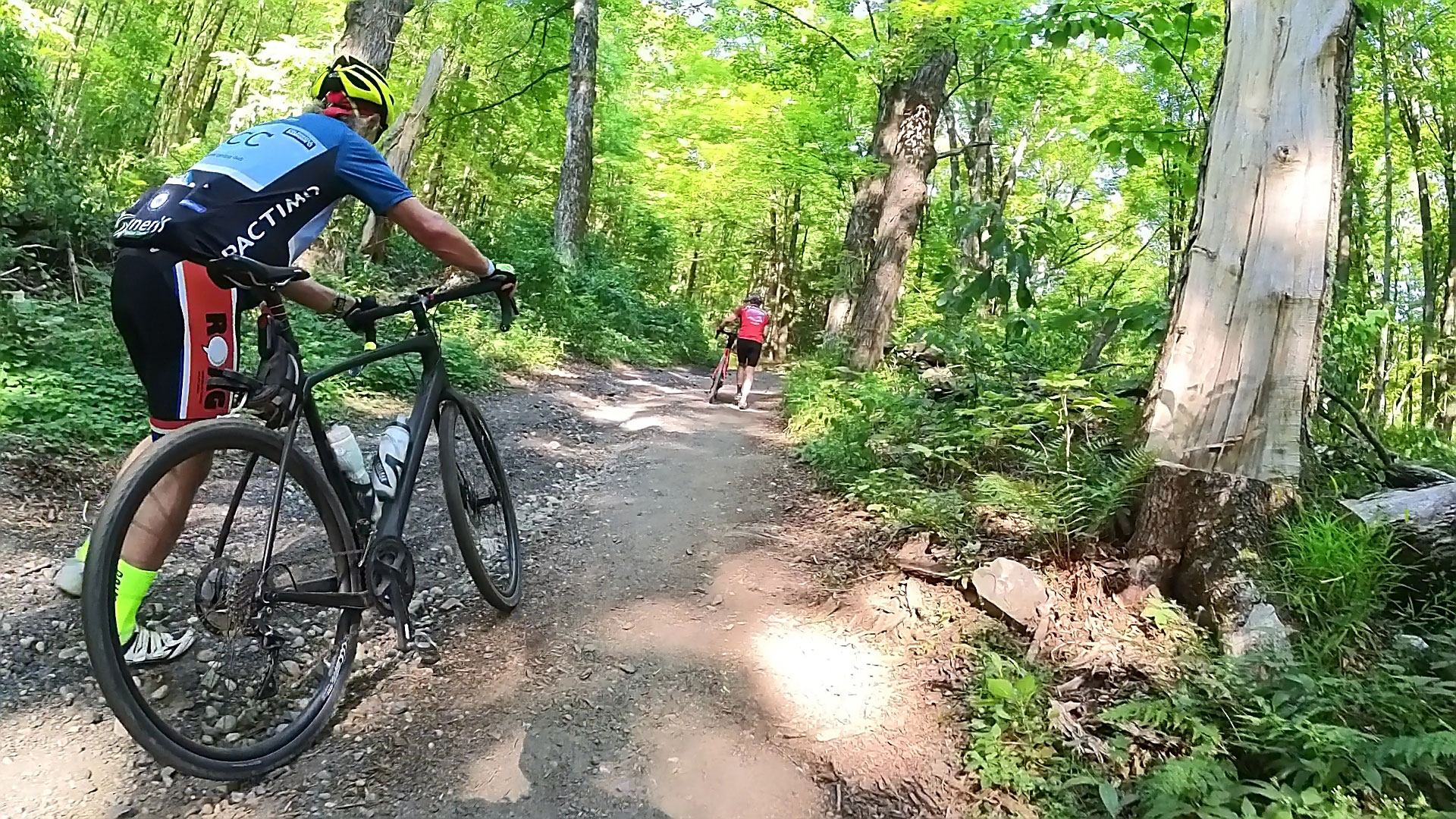 John and I worked together navigating our way up to the first rest stop. After crossing Route 2, some of the faster 100K riders who had started a bit later started to pass us as we ascended the dirt hills on Cooper Lane Road. Just past the farm on Cooper Lane, I fortunately made the sharp descent followed by the monster short climb with no one in front of me. I give the owners of the farm credit for having to drive that section of road in the winter.

The first rest stop was at the Little Big House Gallery in Shelburne. John and I saw the lead NCC group momentarily as we pulled into the stop. After close to 2,000 feet of climbing in the first 13 miles, we took our time refilling bottles before departing. Mike joined us as we rolled out on the dirt road.

After some twists and turns, we climbed the big hill on Little Mohawk Road before turning left onto the dirt of Provolich Road. We came out on Greenfield Road/Route 112 and we were on pavement for a few miles. This included a very fast paved descent into Colrain. We eventually turned right and crossed a little bridge on Franklin Hill Road, which was a solid dirt climb. The longer routes appeared to join the 100K course at this point. There was a homeowner sitting in an Adirondack chair on his front lawn clapping and cheering us on, which was encouraging. 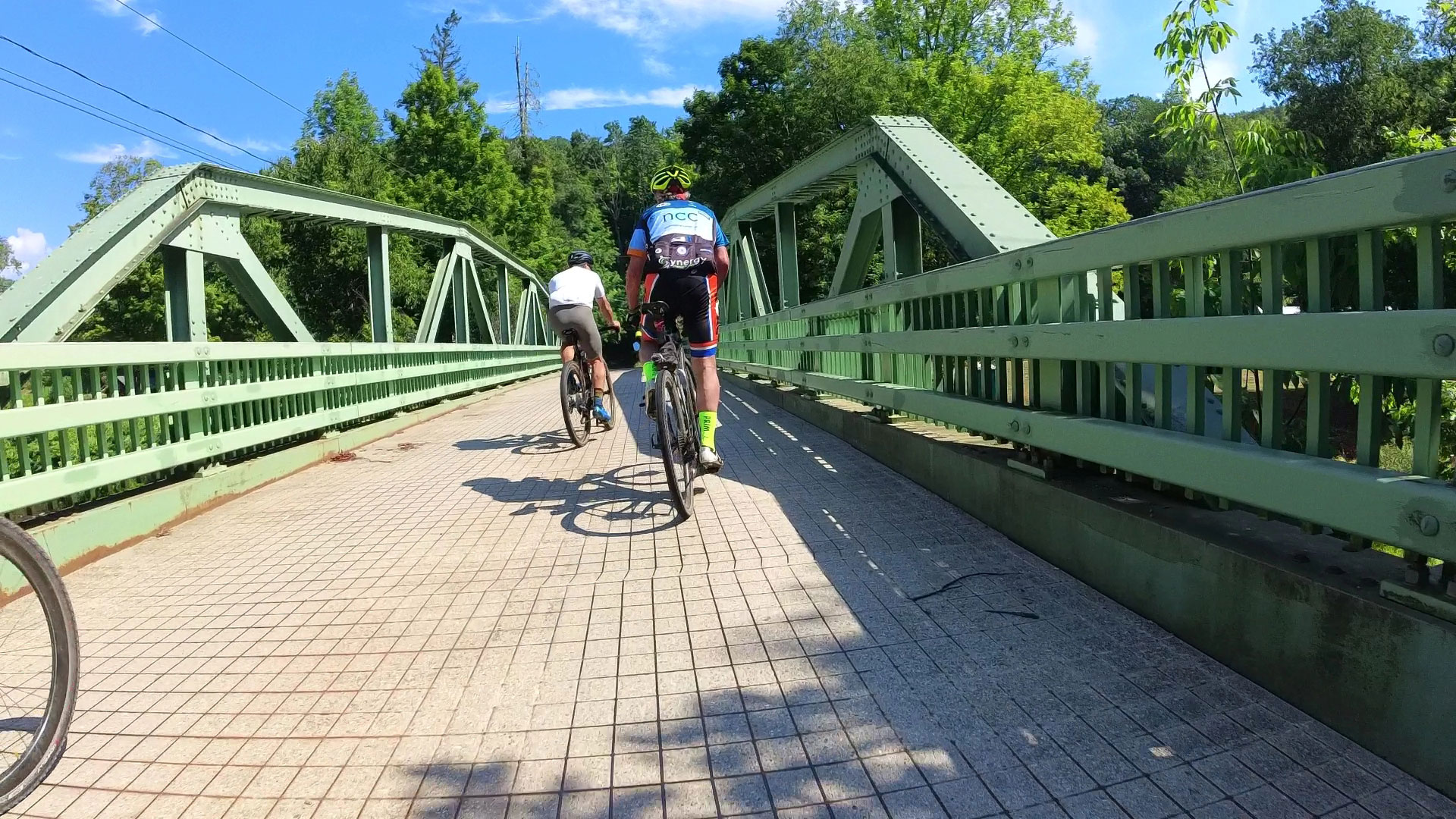 Around mile 24 there was a water stop in the woods. After filling bottles, John and I crossed into Vermont. There is a stone pillar marking the border. Later on in our journey, there was a matching pillar as we reentered Massachusetts. 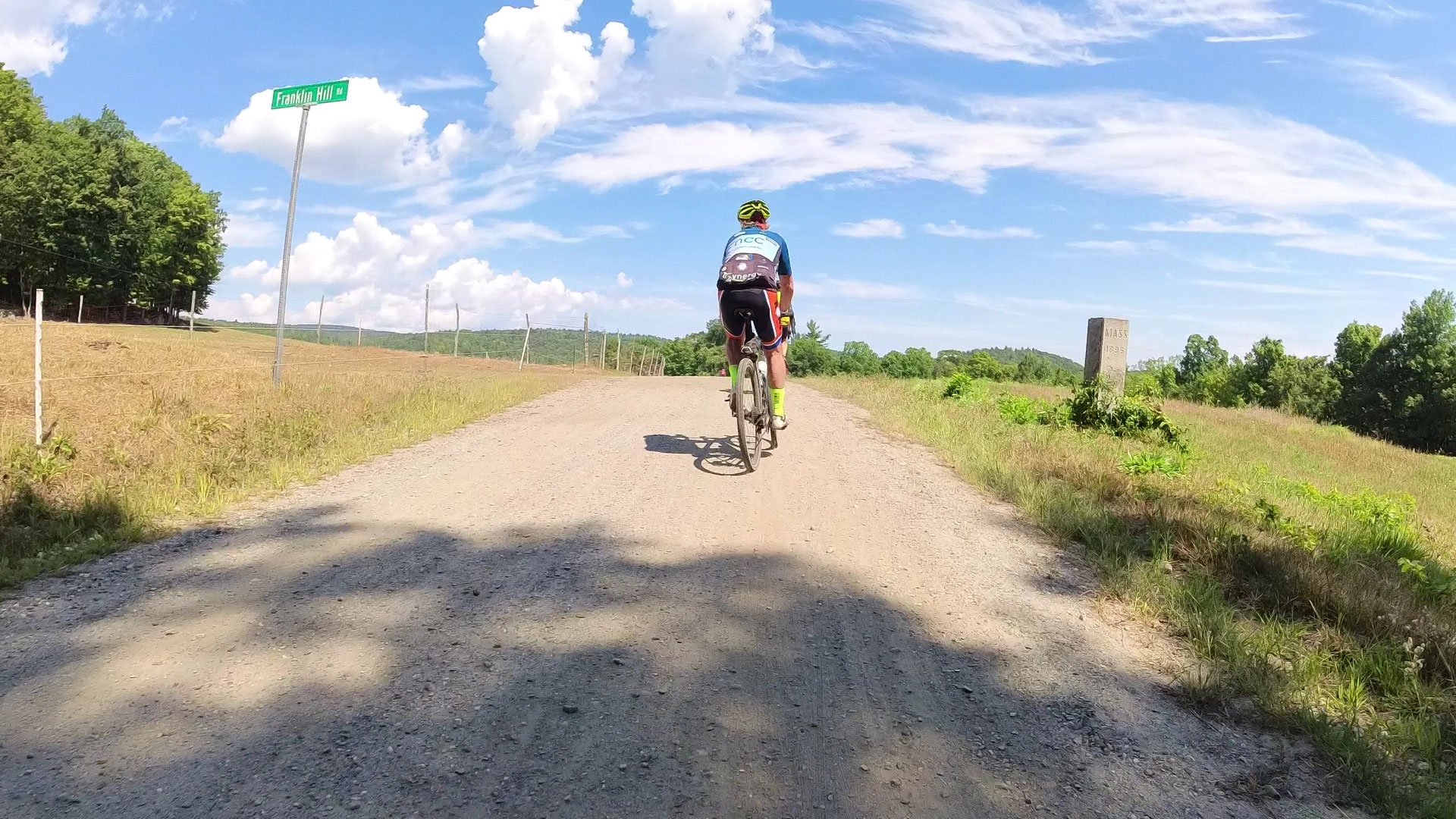 At this point, John pulled away as the climbing continued. To my surprise, I encountered Juan and John around mile 30. They were chatting and taking a break on the side of the road. The promise of lunch about six miles further motivated us to keep going.

To my knowledge, the forecast for Saturday did not mention rain. It started to drizzle, which was pleasant considering the heat. Then it quickly changed to a downpour! Another rider mentioned to me later that he felt hail. It was a very isolated storm. At points, one side of the road had rain, while the other side did not. Fast dirt descents and rain caused the three of us to get rather filthy. The sun came out within ten minutes. 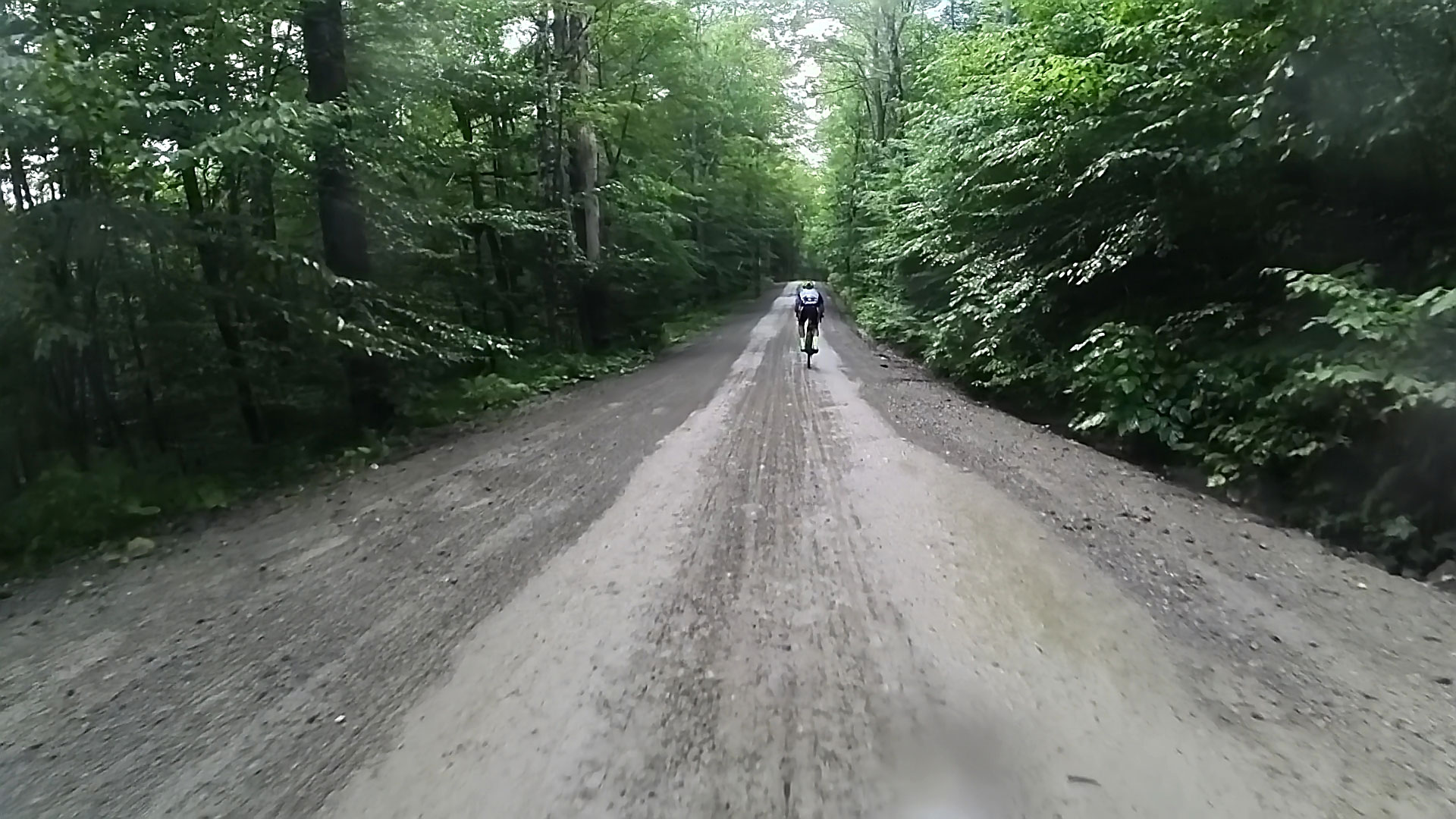 Juan is not afraid to descend quickly. When John and I turned onto Hinesburg Road, the chase was on. John was motivated to catch Juan, and I followed suit. We must have looked insane to the riders we passed. We turned onto the Green River Bridge and entered the big crowd for a break and lunch. We ate our food on the stone wall above the waterfall.

There was a little boy in the water very close to the edge of the waterfall. His dad was watching him nervously. We also had a conversation with a gentleman riding the 100k route in sandals. He said he rides in sandals often and his only complaint was when a large rock would hit his toe. 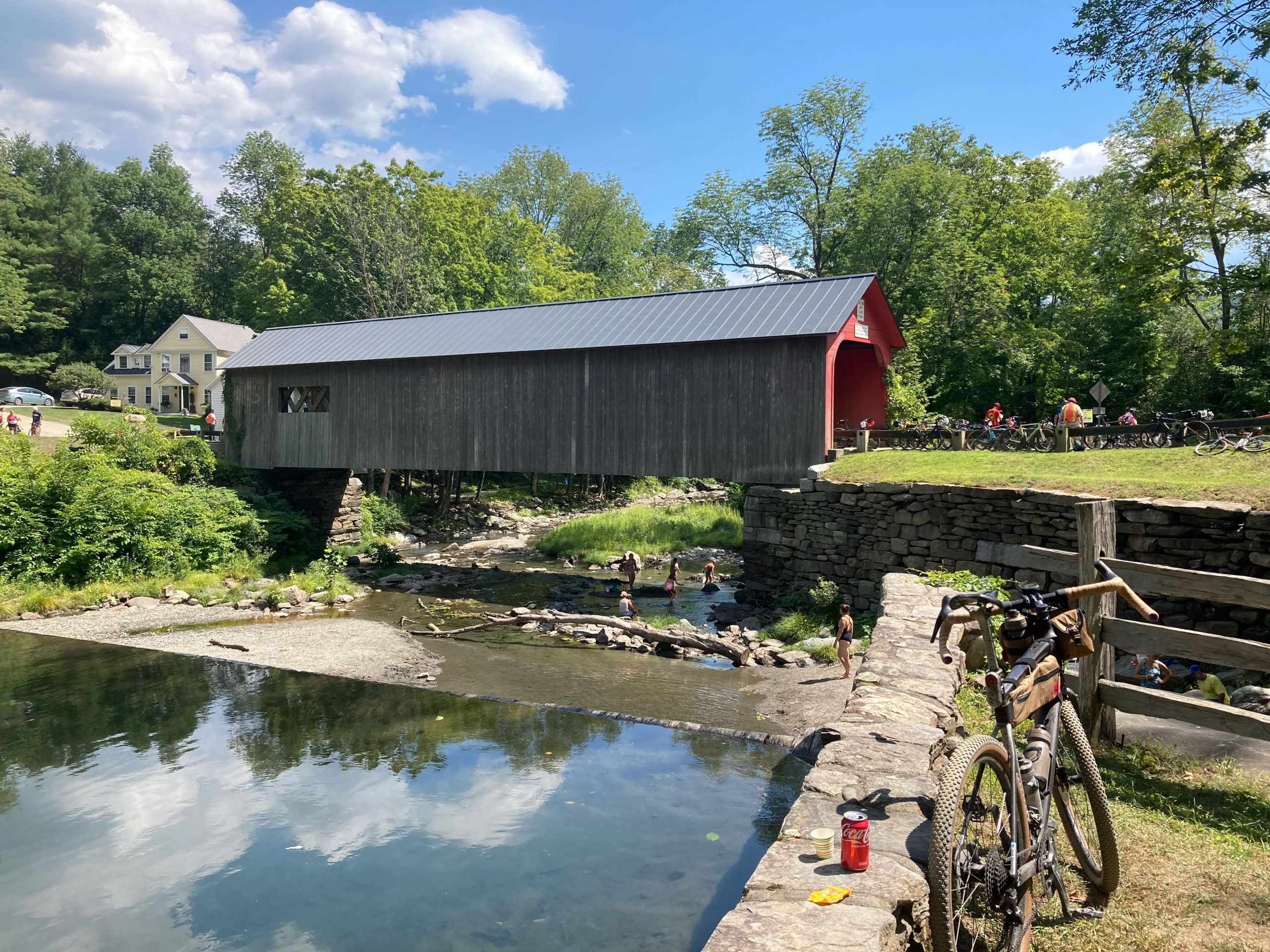 The water level was a little low at the bridge, but as we went down Green River Road on the way back to Massachusetts, the river had very little water. We need more rain. 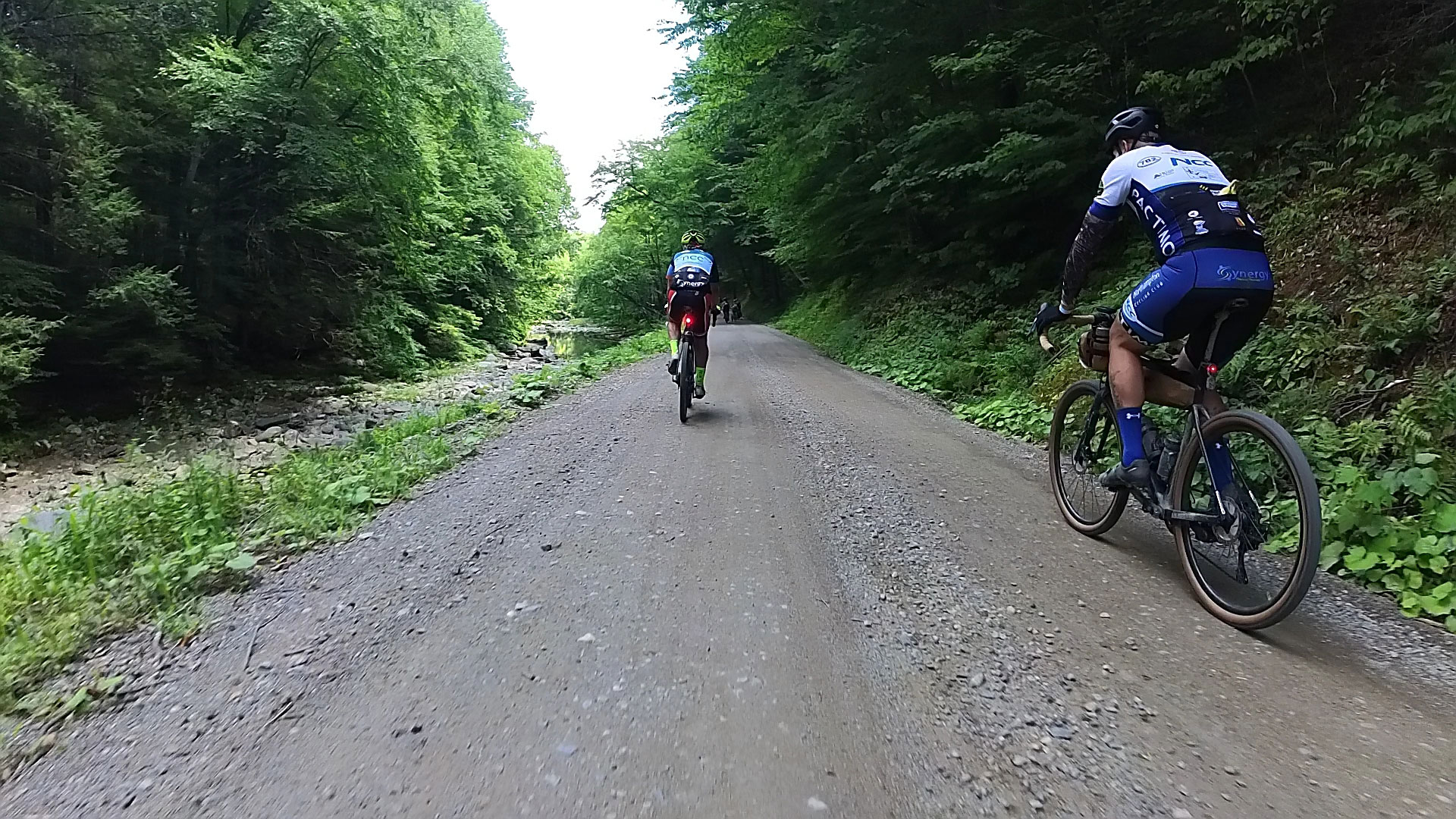 Just past mile 47, Juan and I turned onto Nelson Road and started climbing. John decided to head back to Deerfield by continuing on Green River Road. The climbing was slow and hot. The temperature was approaching 90 degrees at this point. After being a little ahead of Juan for many of the climbs, his descending prowess returned and he zoomed by me on Smead Hill Road. I took my time and said hi to the cows the the end of the zig zag on Wilson Graves Road. 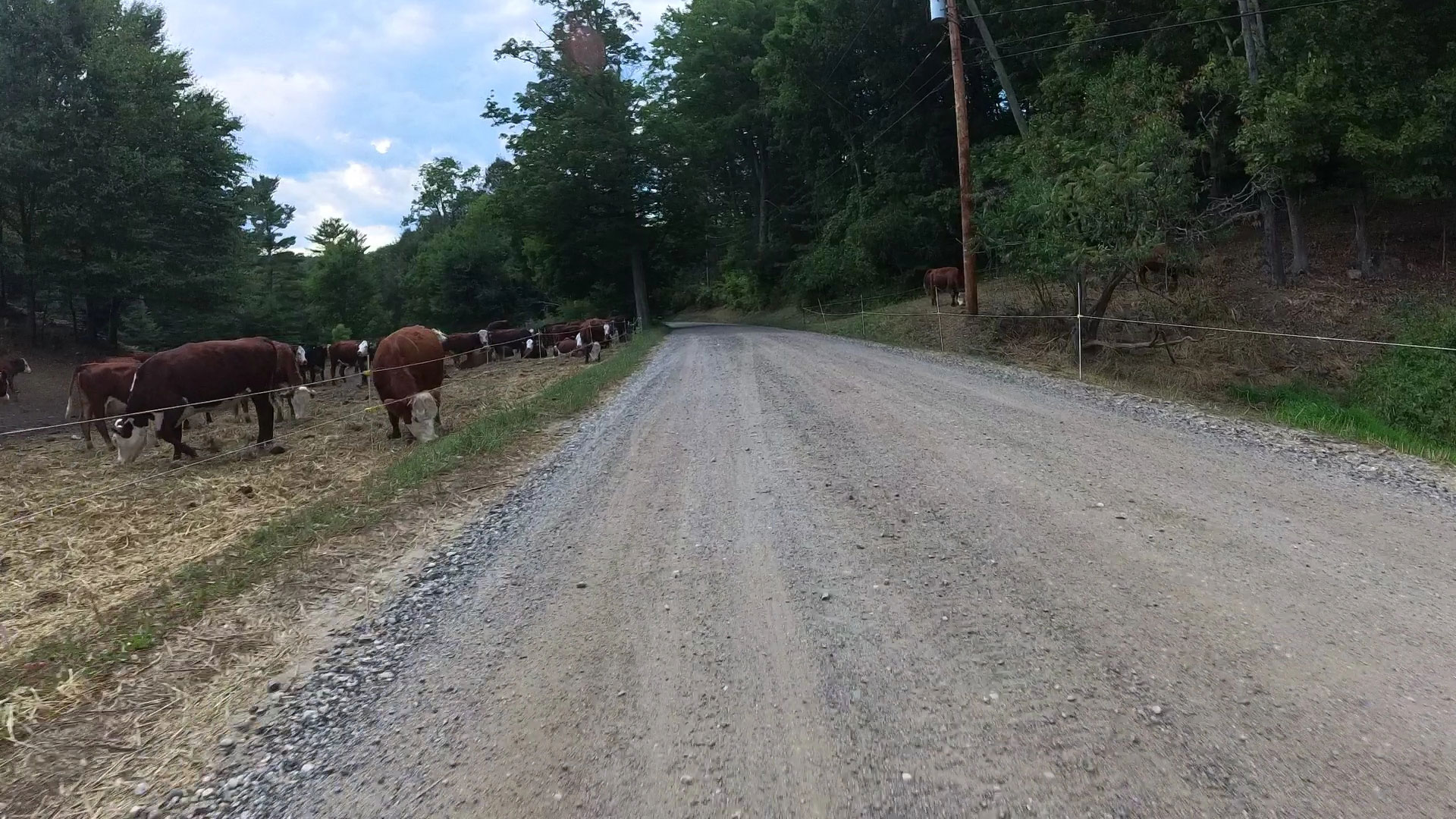 Then the last major climb of the day started. Peckville Road is about 0.7 miles, which does not sound too bad, but it is steep and we were all tired. The way the road is set up, I could see Juan way ahead of me and that helped to motivate me. There were several riders swerving back and forth in an attempt to make the ascent manageable. 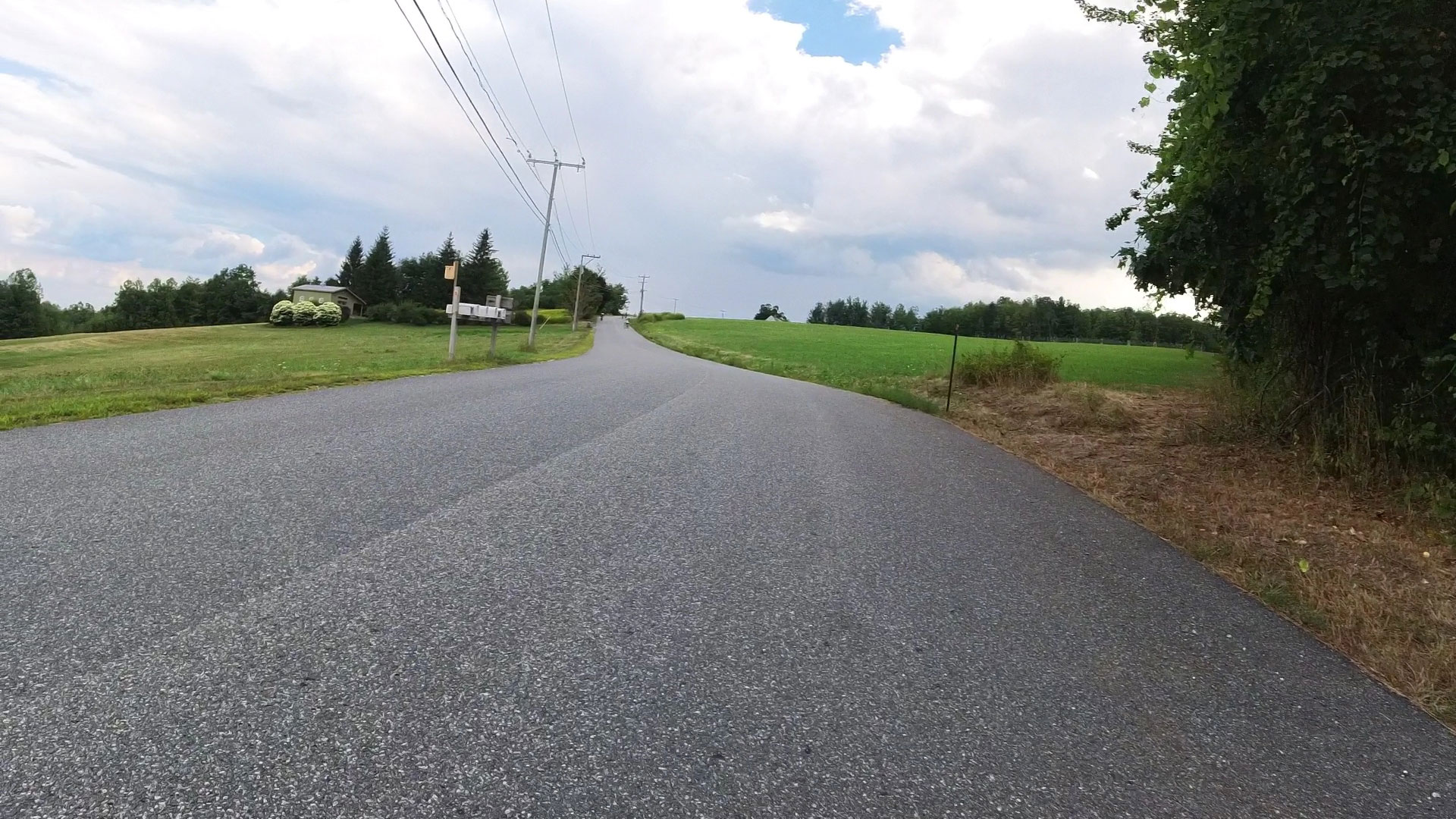 The sky was getting dark and I thought the view from Apex Orchards might be hidden. Fortunately, the panoramic views were visible. Juan, Meg, and I sat at a picnic table. Juan really enjoyed the fresh peach. So much so, that his family was coming to the orchard to see the view and have a peach. Meg and I decided we needed to ride or our bodies would not function, so we said goodbye to Juan and coasted down Peckville Road. 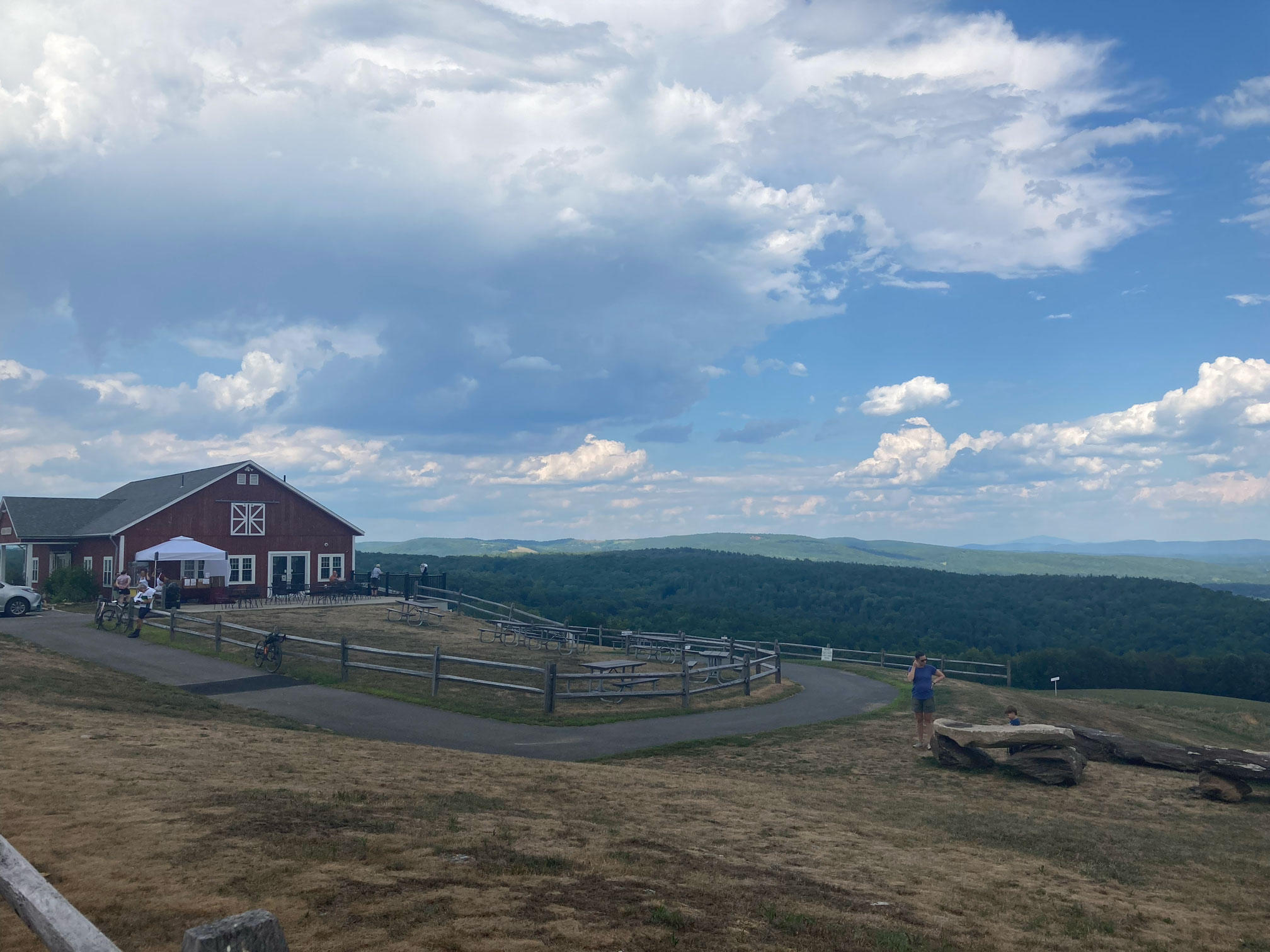 The rain started as Meg and I were on Skinner Road. The tree cover minimized the downpour and within five minutes, the rain stopped. Meg successfully got across Route 2 without having to wait. I was 30 seconds behind and had a long wait for traffic.

It was the home stretch now, and I was content to ride solo the rest of the way. The GPS is always confused by the right turn onto Taylor Road. Meg apparently missed it, so she emerged behind me later in the ride. On Taylor, a rider, who I will call “602” since that was the number he was wearing, started riding with me. This event was his first ever cycling event. Since he did not have a bike computer, he was attempting to follow other riders to know where to go. As we talked, the sky opened up again. 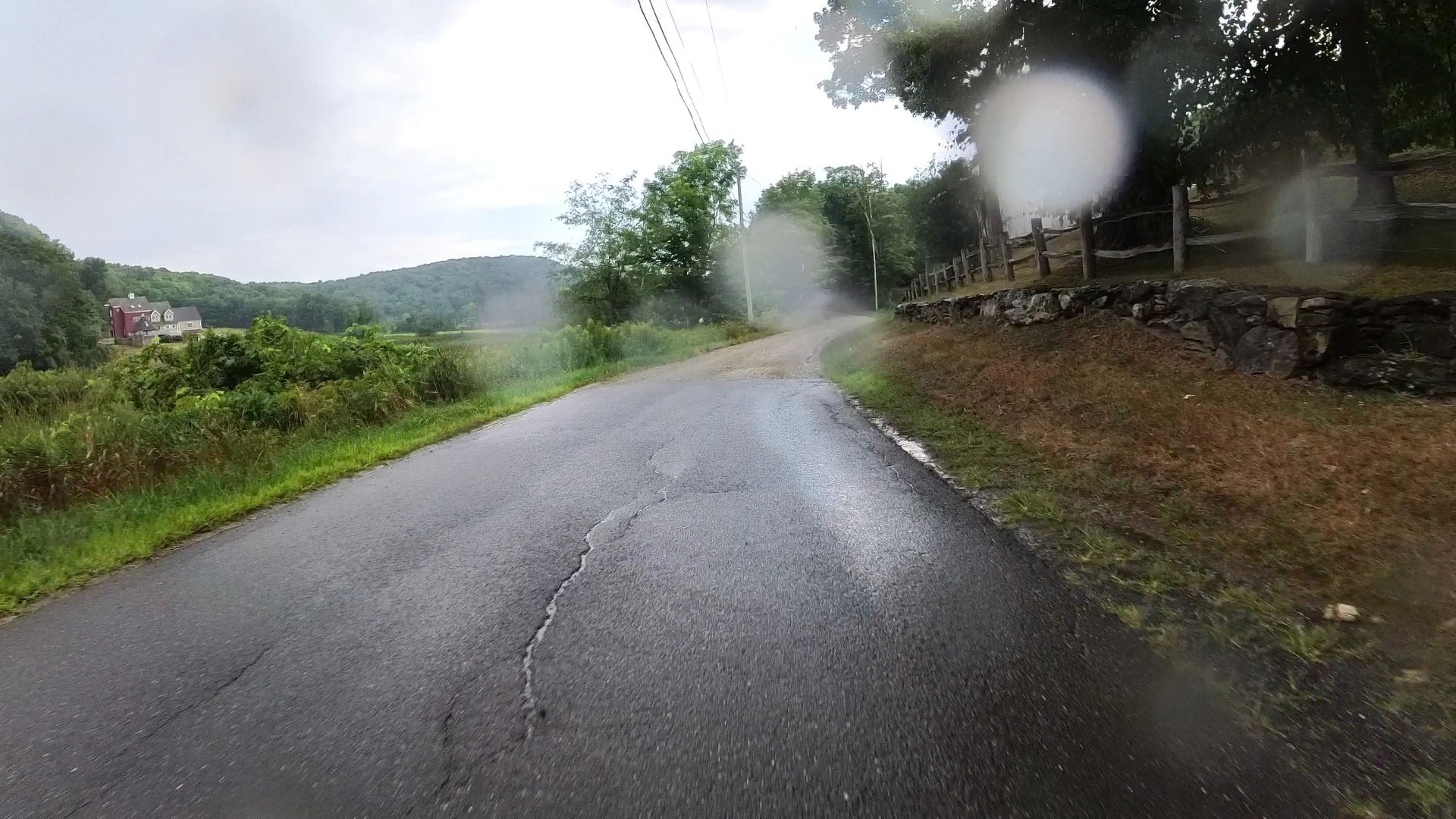 Hawke Road is challenging, but it was the final gravel section of the route. Midway through Hawke Road, Meg appeared behind me and explained the GPS confusion. A minute later, her superior gravel skills had her pulling away. Somewhere during this section, a large rock flew up and hit the front of my shoe, which was not a big deal considering mountain shoes are designed to take such impacts. I laughed as I remembered the sandal wearing rider at lunch. 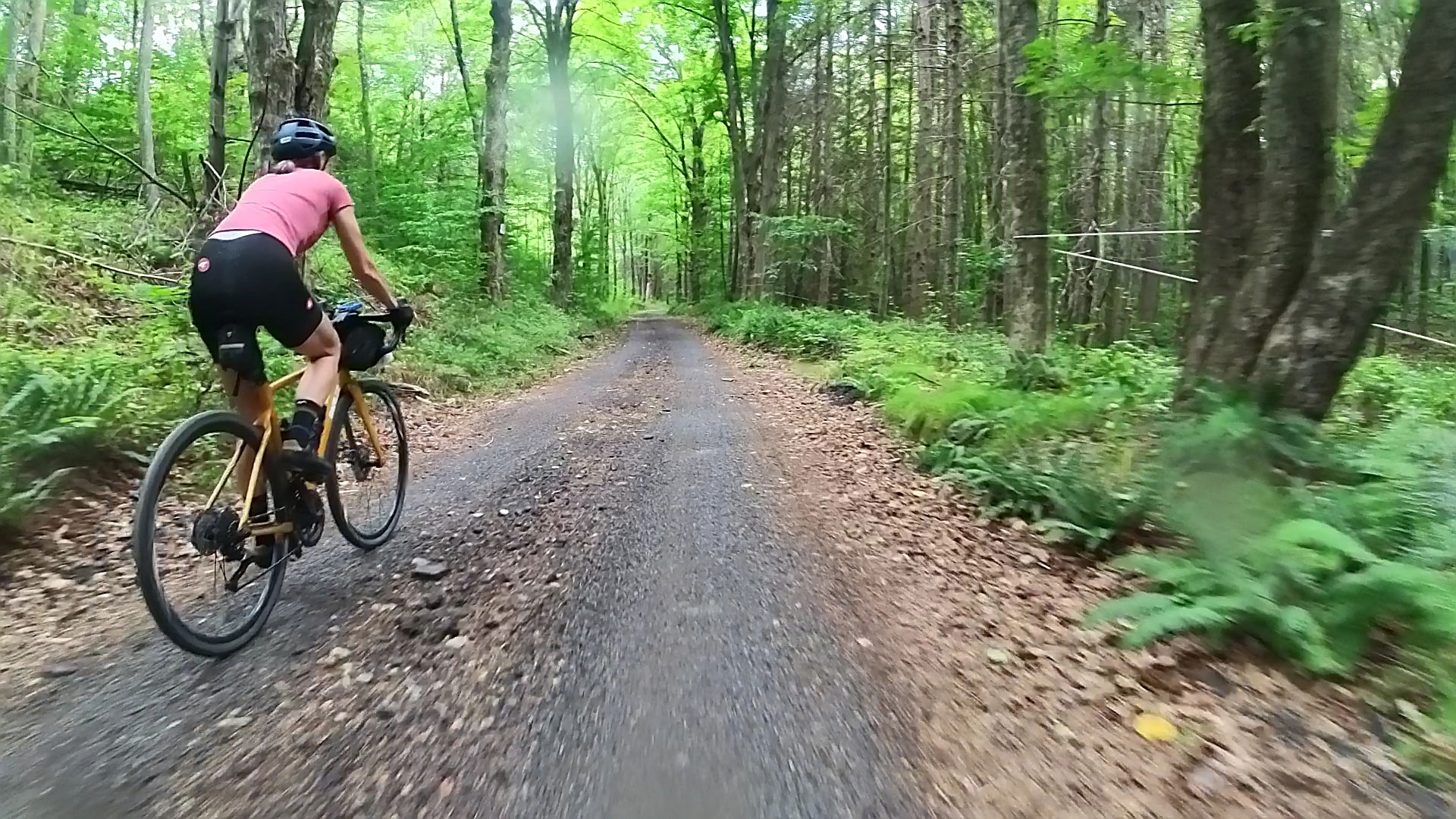 The final few miles were on pavement. It felt great to cross the finish line. For the 100k route, we rode approximately 64 miles with 6,000 feet of climbing.

After packing the bike, I grabbed some food at the tent and caught up with Charlie, Lynda, Melissa, and Patty. They had finished about an hour before me, so they were refreshed in comparison to me. Their group got held up at Apex due to a passing thunderstorm, which I completely missed. I was also amused to learn that Melissa and Joe were singing duets as they climbed many of the hills! 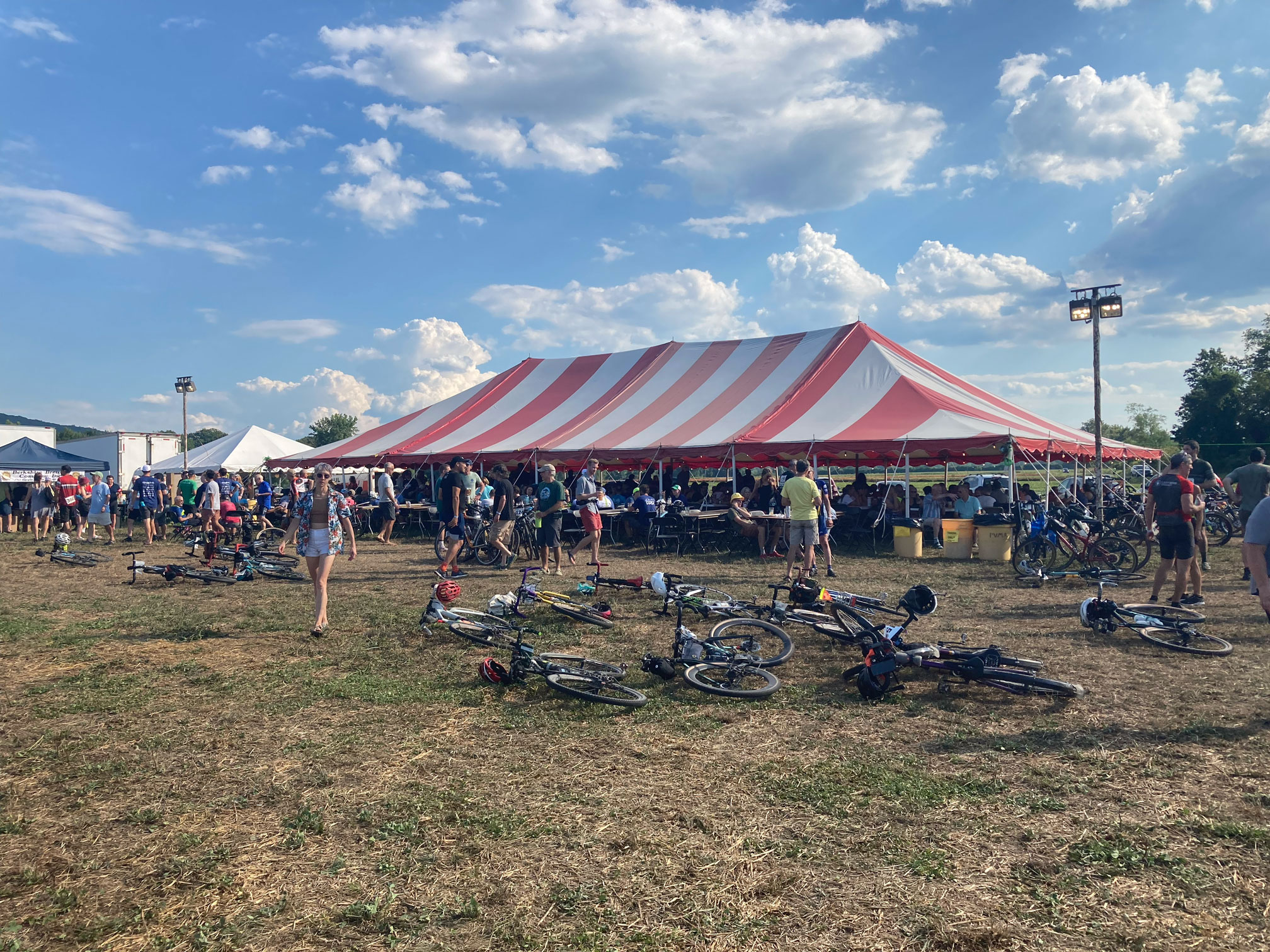 D2R2 was a fantastic event. Thanks to the Franklin Land Trust for putting on such a well-organized event.