Before I get into my report, a reminder that NCC’s Greylock Hill Climb Time Trial is less than a month away – Saturday, September 10. NCC members receive a discount on the fee, and as with all events, we could use some volunteers.  Send an e-mail to volunteer@nohobikeclub.org to inquire about opportunities. This is a fun, low-key event and you get to enjoy the views from the highest peak in Massachusetts!  Now on to the regularly scheduled program….

The humidity and hot temperatures finally took a break leaving us with a very comfortable (almost cold!) morning. We had eight riders under clear skies in the low 60’s (F) gather at Pulaski park to take on a nearly 80 mile route with 6000+ feet of climbing southwest to Otis at the tip of the Otis Reservoir.

But about the route… shortly after I posted the plan on Friday, a helpful club member alerted me to some road construction in Blanford, on a seven mile stretch of road.  With that information, I also phoned a friend, who phoned a local to try to get even more details.  The word was that N. Blanford Rd was scarified pavement near the center of town, and an alternate road was suggested to avoid that stretch.  Looked like we’d avoid it.

Rolling out of town was good and social as always. We had couple new riders (well, I guess not new, but not “regulars”) – Tim D (inside Tim) made an appearance, and a guest Ali, from DC here visiting relatives.  As with most of my Saturday rides, there are not very many miles before the hills start.  This time, out of town on Rte 66 quickly woke up the legs, and then the always beautiful climb up Park Hill Rd.

When we rolled onto Pomeroy Meadow Rd in Southampton, which is straight, but has a slight upward grade, I quickly realized today I would be the SAG.  We had a very strong group, with the three ladies towing us along already.

The first of the two major climbs on the ride is Montgomery/Southampton Rd.  This one many of us know, but I think it was new to about half the group today.  It is part of the Great River Ride route if you know that.  2.6 miles over 816 feet with an average 5.8% grade, with a nearly 18% in there.  Prior to arriving at the base of this climb, there are a few rises, and a descent, and I had lost the group in there somewhere. I kept thinking that I never had any ride where the group was so excited to get to a big climb so fast!  I did see everyone else ahead of me for a while, but was impressed (and/or defeated) when they were out of sight, and asked me at the top what happened?

After reaching the center of Montgomery, we descended back down toward Huntington, but instead of heading to Rte 112, we successfully all turned off on Carrington Rd, which is a beautiful side road, with a nice little climb, then drops us on to Rte 112 closer to our turn to the biggest and longest climb of the day.

Russel Stage Rd is a good one, it takes you from Huntington up to Blanford.  Four miles, 1077 feet, average 5.1% grade with a max in there of 15%. I’ve taken the club up this one a few times, resulting in many comments, cussing (?) and other things.  This ride, there were none.  I was once again impressed by how strong everyone was, and the lack of any comments encouraged me that this was actually enjoyable!

At the top, our planned detour began to avoid crappy pavement.  We took North St, by the fairgrounds, then crossed over on Gore Rd- new to me.  Gore Rd was awesome- a fun descent.  Gore Rd links back up with N. Blanford Rd- which, indeed still had scarified pavement. It was not all that bad, but certainly kept us vibrating, perhaps preparing for D2R2 next weekend.  Four miles of that was a challenge, but at least two of that I was able to cut out with Gore Rd.  When it is all re-paved, it will be a beautiful ride.

Back on good pavement, we headed over to the destination- the tip of Otis Reservoir, with a quick stop for a cloudy photo op without your ride leader: 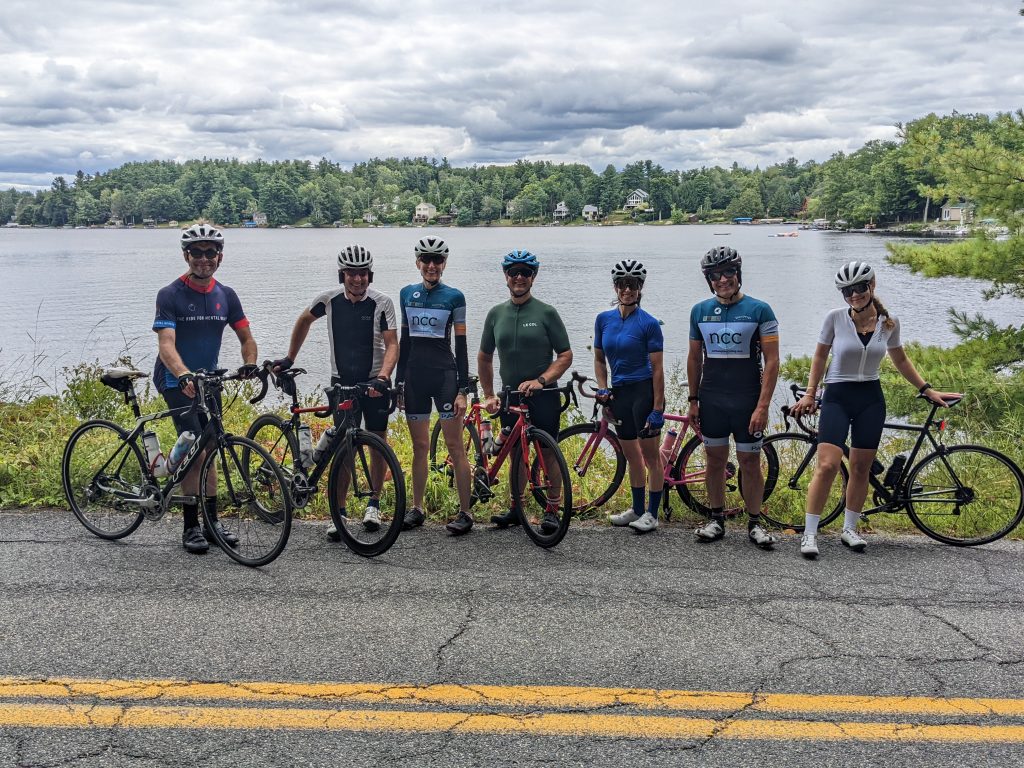 And one with your ride leader: 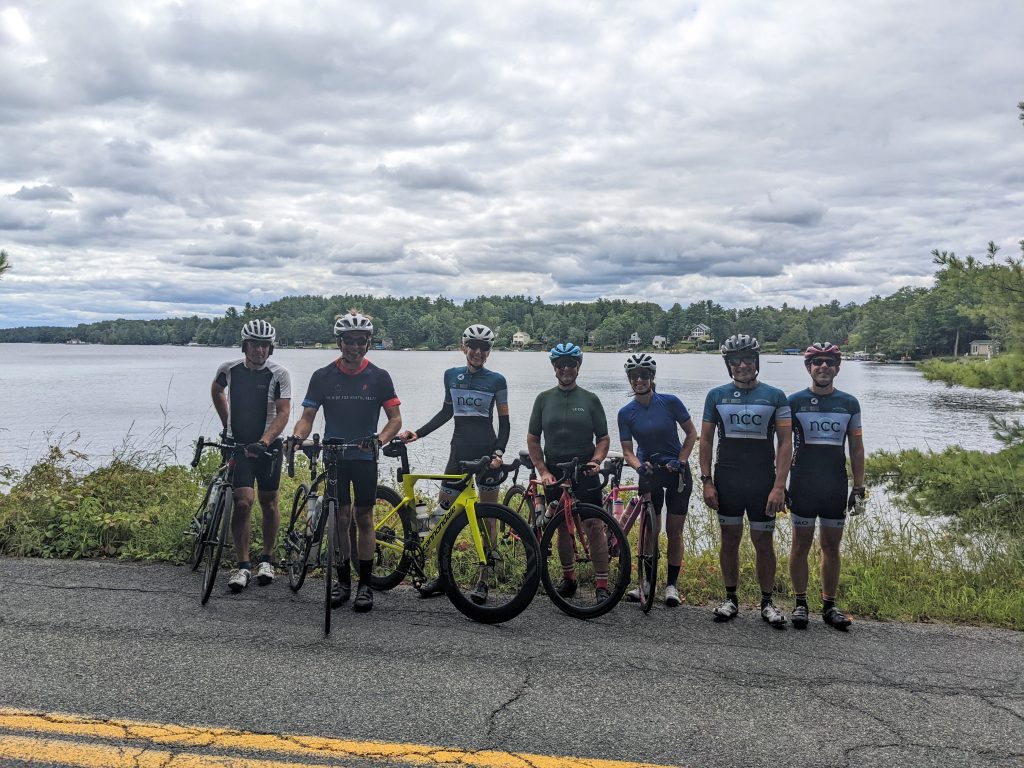 From there, a quick loop back to our rest stop at “Pappas”, which was hoppin!  There was a farmers market, and it was the place to be!  We fueled up on gallons of water, fig newtons, beef sticks, and thanks to Ali’s determined search in the store, pickles!

The route home had to be Rte 23 – which despite being a main road, did not have too much traffic.  It was not all down hill to get home.  Rte 23 rolls down, but then a not insignificant climb back into the town common in Blanford.

At the top of that one, I think this was the general feeling among all of us: 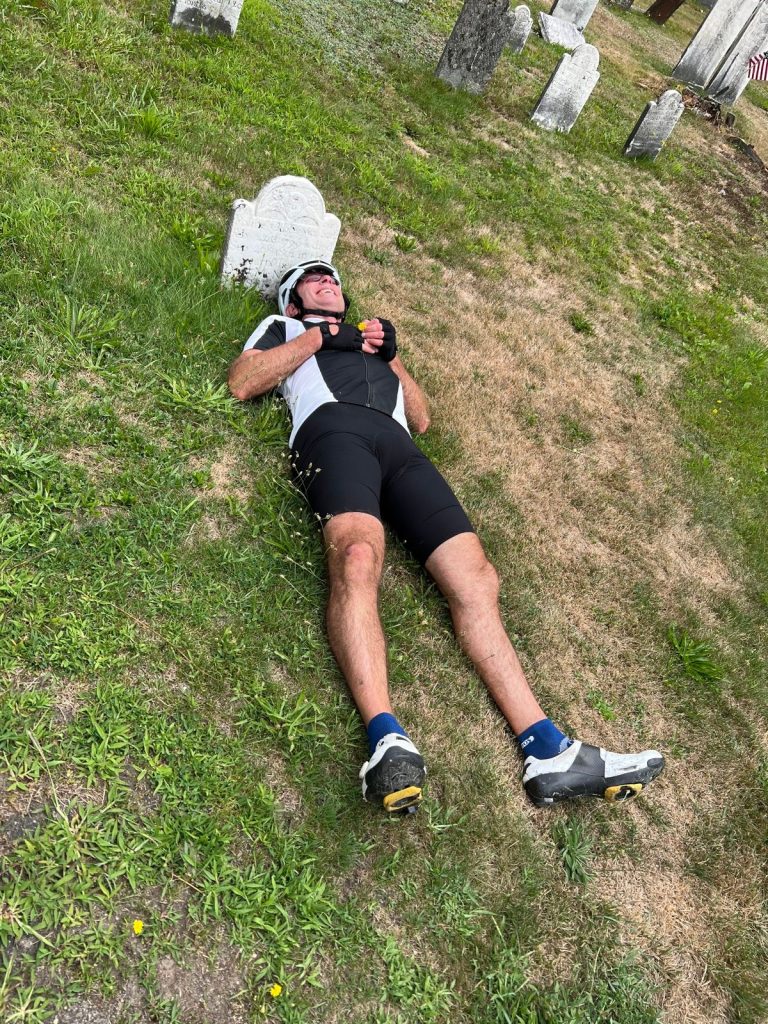 From there, instead of dropping us right on Rte 20, I took us over General Knox Rd- another new one to me.  After a short climb, this descends quite a bit and is quiet and nice.  It was a bumpy ride in spots. I decided to stop trying to hang on to the group on a descent, and instead took my time enjoying the scenery.  This looks like an awesome ride in the opposite direction in the future.  This road ends up by Westfield State University, in familiar territory.

I navigated us through downtown Westfield over to Pocassic St, which has some great farms, and to the last of the climbs up into Southampton.

I want to give a big shout-out to the three women on this ride (Wendy, Melissa, Ali) that pushed the rest of us hard. It was amazing.  Also, Ali, whom rode with us last year (see this post), blew us away this year, so much improved- she was at the front of the group so many times!

Also, worth noting is that this week, with twice the climbing, but nearly the same mileage, ride time was not all that different.  Again, I attribute that to the awesome, strong riders we had on this ride.

Another great ride with all!  What will next week bring?