The weather this summer has been interesting, I guess, is the best way to describe it.  I am not complaining, it has been great to not have to cancel each Saturday (remember last year, how wet it was?).  But I will complain about the accuracy of the weather forecasting.  Wednesday and Thursday the hour-by-hour kept changing, as well as the high temperatures.  On Friday morning, the high was set to be 85, so I posted as normal start time (we can handle 85, right?).  As Friday wore on, the high temperature forecast soared to 95 with heat advisories. But, on the positive side, later or no storms. So I made a late change late on Friday afternoon to begin at 8 AM.  That turned out to be a good call.

Every weekend has been so different. I think this weekend folks are getting in last minute vacations, or training on gravel for the D2R2, or just could not make the 8 AM start, or even being smart(er than us) and getting in a ride really early.  We departed Pulaski with five riders under clear skies, 75 degrees and very humid.

This week’s route I really enjoyed designing. Because of the heat, I wanted to keep us out of direct sunlight, and near brooks, lakes, or streams.  I also decided it would be nice to take a break from big cumulative climbing, but keep up with the miles.  When we pile on the miles, we are able to get to some destinations typically out of reach in a “normal” ride. One of my favorites in this category is “the other Gulf road”, which starts in Northfield and ends in Erving.  This was the ultimate destination today, but I put a twist into it as well as routing us by several scenic areas and even over some cooling dirt roads.

We rolled out of town over the Norwottuck rail trail bridge into Hadley and on to Rte 47. It was nice to ride this north for a change, as most group rides head the other direction. The wind was calm and the sun not so high yet, we had a good pace that allowed us to note the very dry farm fields all the way to Sunderland center.  From there we kept on Rte 47 for a bit, then turned onto Falls Rd, and eventually crossed over Foster Rd to rejoin Rte 47, taking that to the end, and up Leverett Rd.

And so the first, long climb of the day began without complaint or incident.  We rolled past lake Wyola (which looked mighty inviting), and then up, and up more into Wendell. We noted that it recently rained there, as the roads were damp and the trees were dripping (yeah, I checked that it was not my sweat!). At the top of the climb, which is conveniently the Wendell country store we took a much needed hydration and refuel stop.  It was actually a very refreshing 75 degrees in the shade up there.

After hydrating, it felt great to head over to Farley Rd, which is a fun and fast descent, thus cooling us down more.  We don’t often ride Farley in the down direction all the way out to Rte 2 in Erving, so this was a big treat.  Speaking of Rte 2, we had to ride that 2 miles to the next turn, it was hot, and so much traffic, but not much can be done about that.

Our turn up North St is where the fun (?) begins.  The couple of times we have ridden this, we climb the whole thing and then descend into the center of Northfield on Rte 10.  But, not today. Time to explore!  I looked on the map and found South Mountain Rd, which bangs a left before the summit of Gulf, and eventually drops on to Rte 63 in Northfield.  It is paved, why not try it?  It appears other NCC members have done this climb, maybe I should have asked them about it.  This hurt, and I was certainly swearing at myself.  It is steep and relentless.  Essentially, twice. The Strava segment is called Back side of South Mtn. Rd.” It is just over a 1/2 mile long with an average grade of nearly 11%.

The reward though made it worth it: looking at this view: 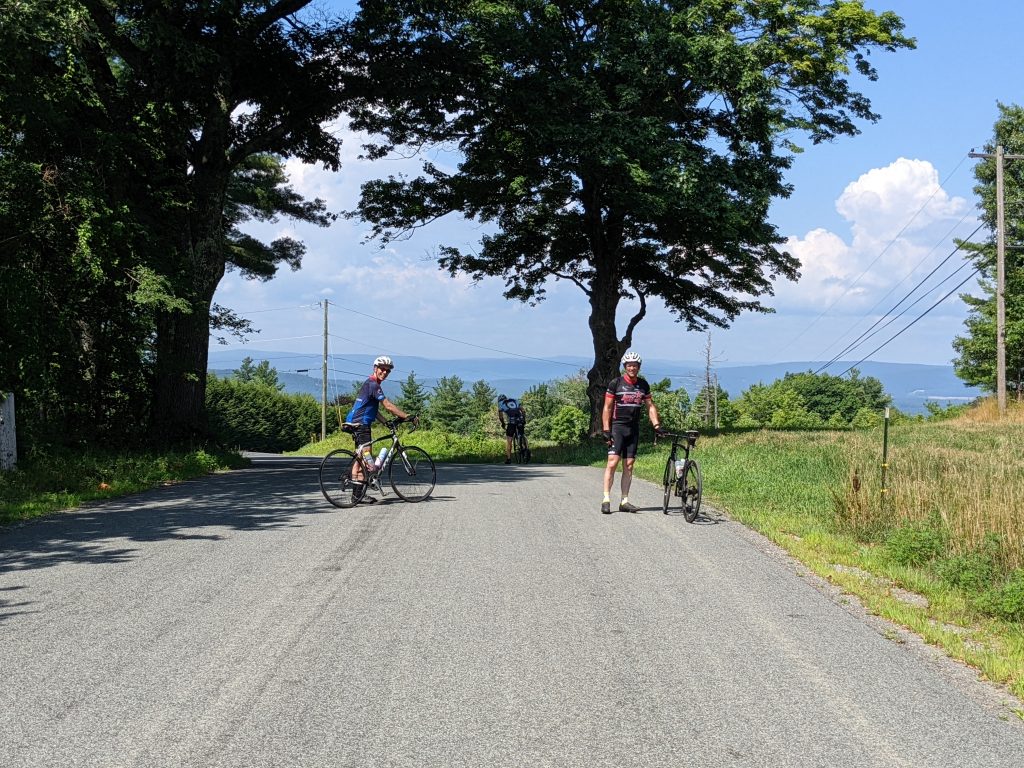 Just before we got to this point though, we had an unplanned feature on the ride, which seems to be a signature of my rides: 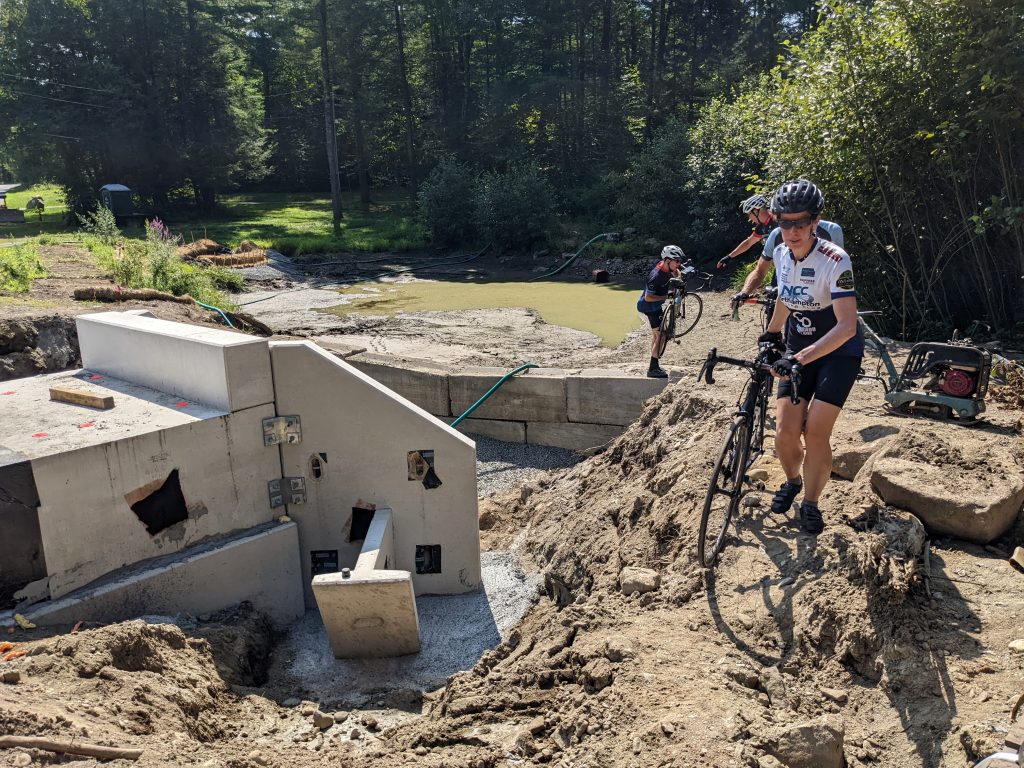 Yes, another bridge out!  This crossing was a heck of a lot easier than others though, as there was essentially concrete across already.

The reward, in addition to the first photo above, was a clean, clear (because the road is closed) and exciting descent to Rte 63.

After a little bit on Rte 63, we turned off toward the Four Star Hop Farm and Brewery, taking in the beautiful farms and again noting all the irrigation that is happening.  This led to our first dirt section of the day which parallels the Connecticut River and offered some more shade.  Eventually the dirt turns back to pavement as we crossed the Millers River pedestrian bridge past the Cabot Camp.  And ugh, another climb to Millers Falls Rd, which took us to downtown Turners Falls for our second rest stop.

Oh so many ways to get home from here.  But the one thing was I wanted to keep us off the River Rd (s), because there is absolutely no shade and it is just a slog.  So the next best route is through Old Deerfield and Mill Village Rd.  Or was it?  As soon as we got past Old Deerfield the (head) wind picked up and the sun was beating hard.  Ron, as always took some long pulls to keep us moving.  When we got to the center of Deerfield, the temperature on the bank clock was 93. Ouch.

Still, any way home would be hot and windy. I chose Long Plain rd.  There was some shade, but not enough.  I know that I thanked every tree I passed!  The fields were dry and blowing dust, it just was not fun anymore, but again, Ron kept us moving.  We somehow made it to Hatfield, on our last dirt stretch of the day, passing the winery.  I was on my 6th bottle of water by now.

The homestretch adrenaline was interrupted (so close to home!) with Ron flatting just as we were getting to the overpass at Elm and Rte 5, where there is always so much road debris.  He urged us to continue on, so we did.