One of our “unique” rides is to Peru.  We usually only do it once a season due to the difficulty.  I had a request from someone (no names to protect the innocent!) to do this route.  It has been on my radar, so why not?  My original plan was to do the loop clockwise, as that allows us to climb the Skyline Trail out of Huntington, and since we had already descended part of it on a ride earlier this season, it seemed like a good plan. However, on a hot day like today (upper 80’s), we need strategically placed rest stops for water.  I thought about it overnight, going through the possible stops and the climbing efforts, noting that they were far apart and not near enough after hard efforts.  On my way to Pulaski Park, I was already sweating head to toe and decided to change the route to the counter-clockwise version (despite knowing the wind would be in our face) so the stops were more logical for a hot day.  It is amazing how the same route, but the other direction, can make a difference with logistics.

We had 13 strong riders, some that I have not seen all season so far,  gather for this challenge under clear skies and around 75 degrees. After a brief amount of time to socialize, it was not long before we had our work cut out for us…. the Northampton Hill Climb as it is known on Tuesday’s, or “the wall” into Chesterfield.  As I expected, most of the group had plenty of matches queued up to burn right away.  Peru is still a long way away!

After rolling down through the old Bisbeeville and back up past the beautiful cornfields, we made our first rest stop at the always friendly Chesterfield General Store.  As we were heading out, Ben and Iggy rolled in, having just climbed up the West Chesterfield wall. 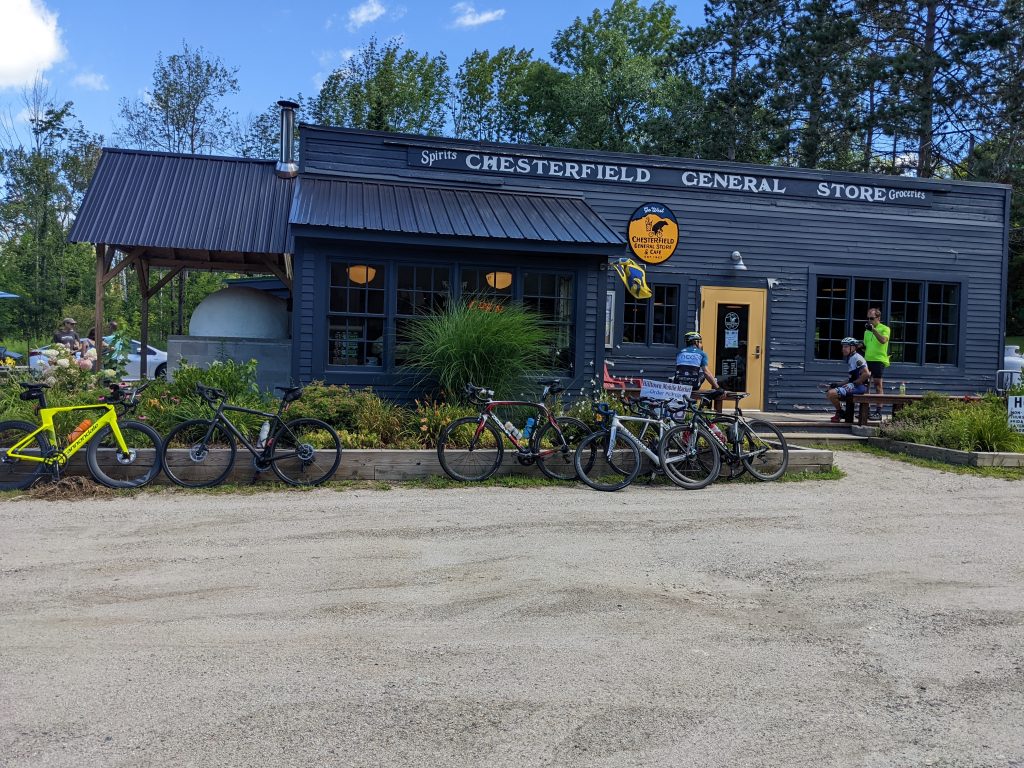 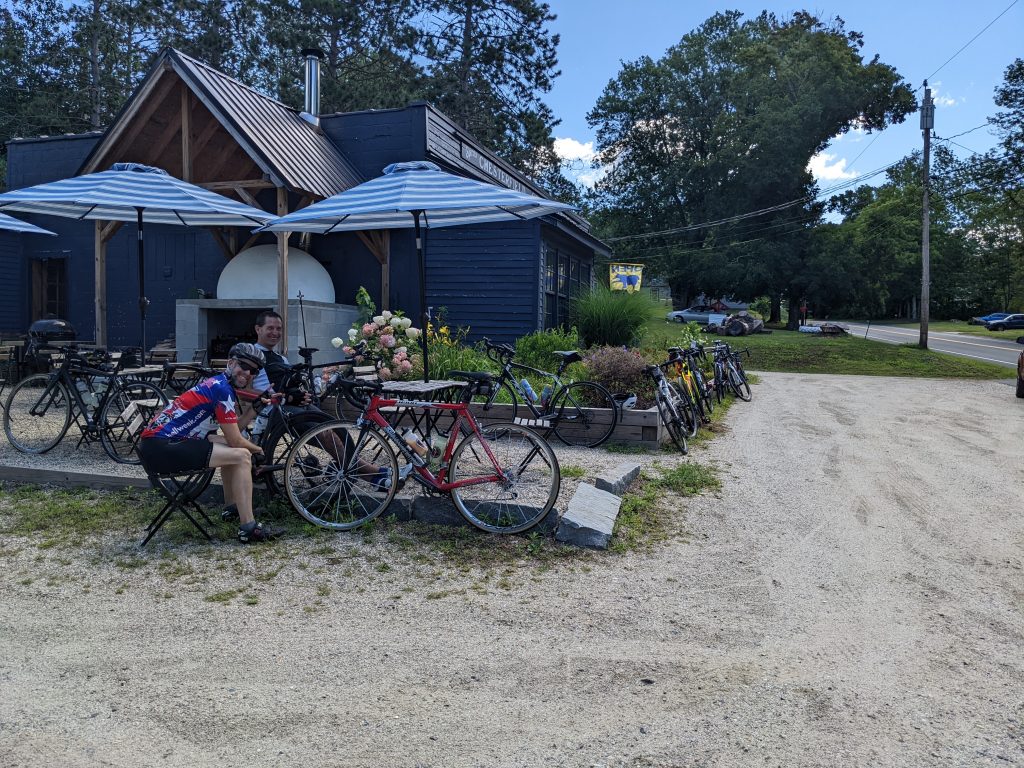 As we pulled out of the store, expecting to have a fun, screaming descent down Rte 143 west, it seemed the wind kicked up furiously.  Not only did it slow us down, but several of us with the aero wheels had to brake and take it really slow due to the uncomfortable wobble of head and cross winds all together.  What goes down, must go back up on a Tim ride, right?  Well, the climb up to Worthington was slowed by that same wind out of the west that would not let up.  However, the scenery, quietness, and ability to socialize during this effort made it fun.

We all re-grouped at Worthington Corners for more refreshments (also there is an outdoor water fountain).  At this point the Gerstein brothers and Henry headed back home due to time constraints.  After a quick rest and a couple of questions I could not (or wound not?!!) answer (Tim, how far, Tim, how much climbing, Tim, where is Peru?), we headed west on Rte 143.  It actually was rather nice to do a route 100% from my head with no GPS and no climb metrics on the computer, etc.  In fact, nobody took a wrong turn- how about that!

The ride to the center of Peru is beautiful and quiet.  Rte 143 here does not see a lot of traffic.  The road has plenty of climbing, but nothing like Chesterfield.  Some open straight-aways and quick descents.  For a good portion of this section, unfortunately, the group was broken up.  We really could have used a decent pace line here.  Through it was a nice cool 74 degrees F, that  (wait for it…) wind was howling in our faces making us keep looking for the center…. is it over the next rise?

At the top, I mentioned (as I always do) that Peru, MA is the highest in elevation city/town in Massachusetts at 2064 feet.  I asked for a group photo, and to our surprise, Jozue pulled out the flag of his home country!  So cool!

Here’s one without your ride leader: 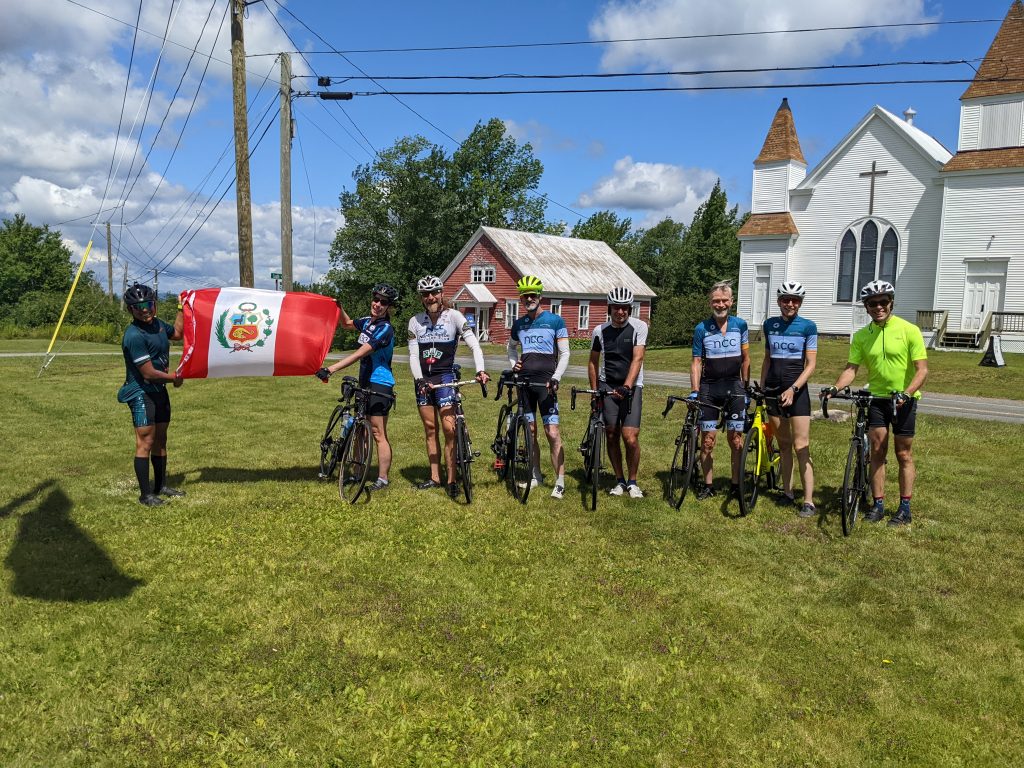 And one with your ride leader (thanks to Melissa) 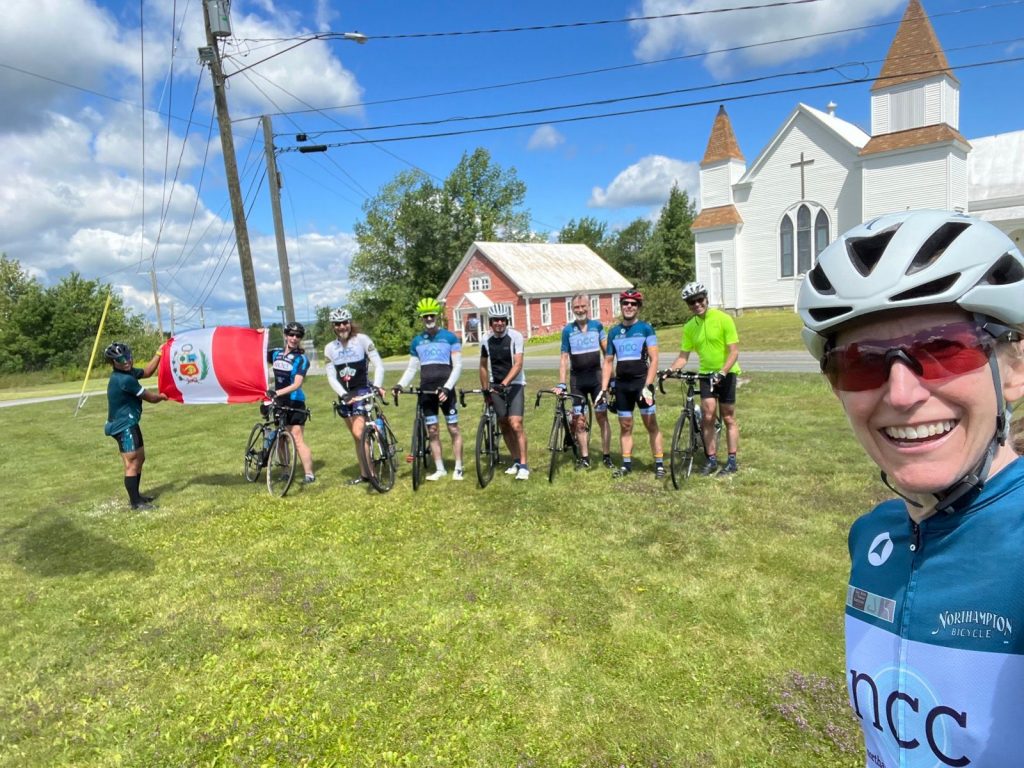 It was here that we also noted (well, someone on the ride did, ha!) that had we ridden the original route that tail wind would have been sweet! True!

From here we turned down South Rd, which is a beautiful road bordering the state forrest, and also is a nice, fast twisty descent. It felt good, but was short lived.  Eventually, it pops out on the top 3/4 of the Skyline Trail.  It is still not all downhill from here.  Skyline is beautiful either way, just that when you are climbing there is more to see, rather than just the parts when your head happens to be up as you are flying down the hills.

We did a couple of quick regroups after the punchy climbs.  It was at this last regroup before the final (and steepest) descent into Huntington where something was said that was interesting or ironic, I don’t know the right word.  Brad jokingly asked if he could call a Uber.  I took that as his legs were tired and a joke.  One that we were all feeling I am sure.  We all headed down this last section, which was the worst pavement of the day… it was in the shade and had a few small pot holes and cracks.  I was behind Melissa and Dusty, flying over those, carefully and quickly making judgements, but also thinking those were a but nasty!  At the bottom, three in the group never arrived.  Turns out Brad hit one of those and broke his wheel. He is okay, the wheel not so much.  So this calling for an Uber was for real.  Elissa and John stayed with him, because none of us really wanted to climb back up there! 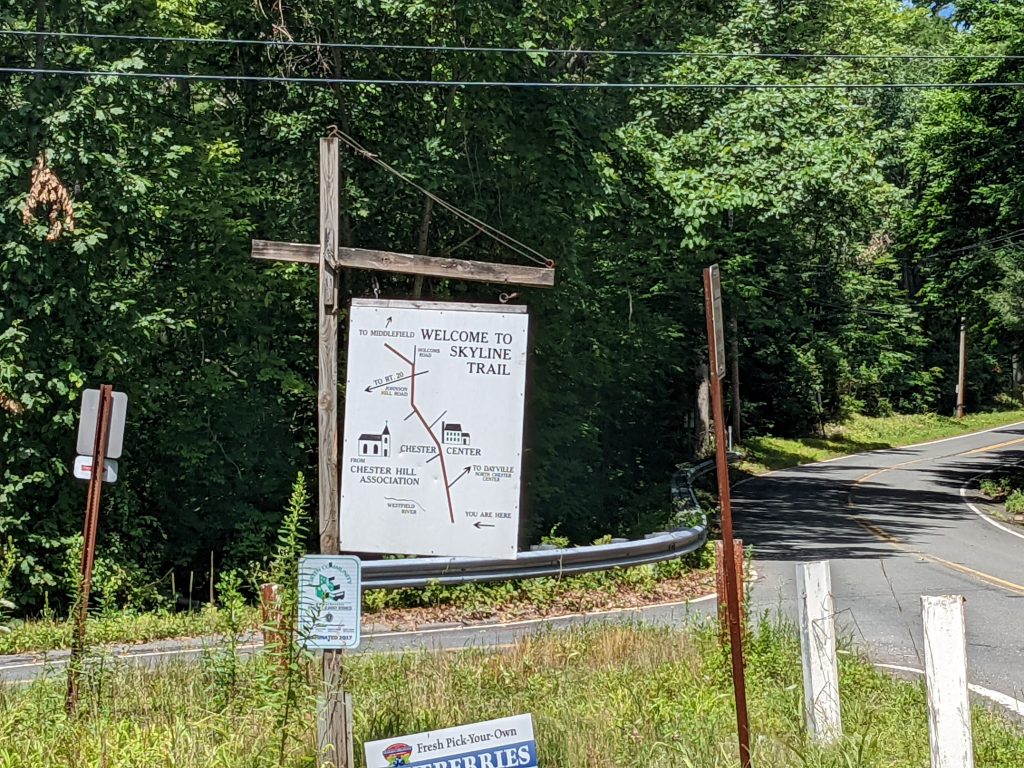 The rest of the group proceeded to our last hydration stop at the country store awaiting a status.  Uber would be 20+ minutes so we proceeded to the last, and punishing part of the ride.  The long slog up Rte 66. As I was climbing I got a couple of texts. Turns out Uber bailed on Brad and he still needed a way home.  I happily took a break on the climb to coordinate.  Melissa would be able to pick up Brad (after getting back to Northampton).  Shortly after, I got another text that one of the Gerstein brothers was reached and would head over to pick up Brad.  What an awesome club we have – so many helpful members!  Thanks to Elissa and John for staying back and making sure Brad was rescued.

The rest of the way home, we had a split again.  It is mostly downhill to Northampton, but certainly still some work.  I stayed with Melissa and Dusty, and we eventually picked up Mark.