After a two-year break, the JAM Fund Grand Fundo was back on Saturday. For its eleventh edition, the venue changed to the Cummington Fair Grounds, which allowed for new routes (with more gravel) and a spacious location for parking, food, vendors, music, camping, and fun.

There were over 250 pre-registered participants for three routes: 29 miles, 46 miles, and 67 miles. In addition, there was a 6 mile youth course, and a youth cyclocross course was set up.

Arriving at the Cummington Fair Grounds, I was greeted by volunteers directing cars to different parking locations. At the registration desk, I checked in and heard the first of many warnings about the heat. Although I was registered for the 67 mile route, the suggestion was to ride the 46 mile instead. The medium route cut out sector 4, which featured 16 miles and 1,600 feet of challenging climbing. I was torn, but the heat was not that bad yet.

After checking in, I got some breakfast and caught up with countless NCC friends. I will say seeing NCC friends without sunglasses or helmets on takes me a minute to recognize them.

Juan and I had planned to depart a bit early to try and get ahead of the heat, but that did not happen.

A little before 9:30 AM, we lined up for the official start under a banner of race jerseys. The Grand Fundo is not a race, but the mass start is a lot of fun. From the grandstand, Jeremy Powers, Ellen Noble, and Stephen Hyde addressed the riders. Ellen and Stephen, both JAM graduates and professional cyclists, explained how much this event means to them on a personal and professional level. Jeremy talked about the JAM program and gave us a final warming about the heat. At the 25 mile rest stop, we would have to make the choice of the 67 mile route or the 46 mile route. 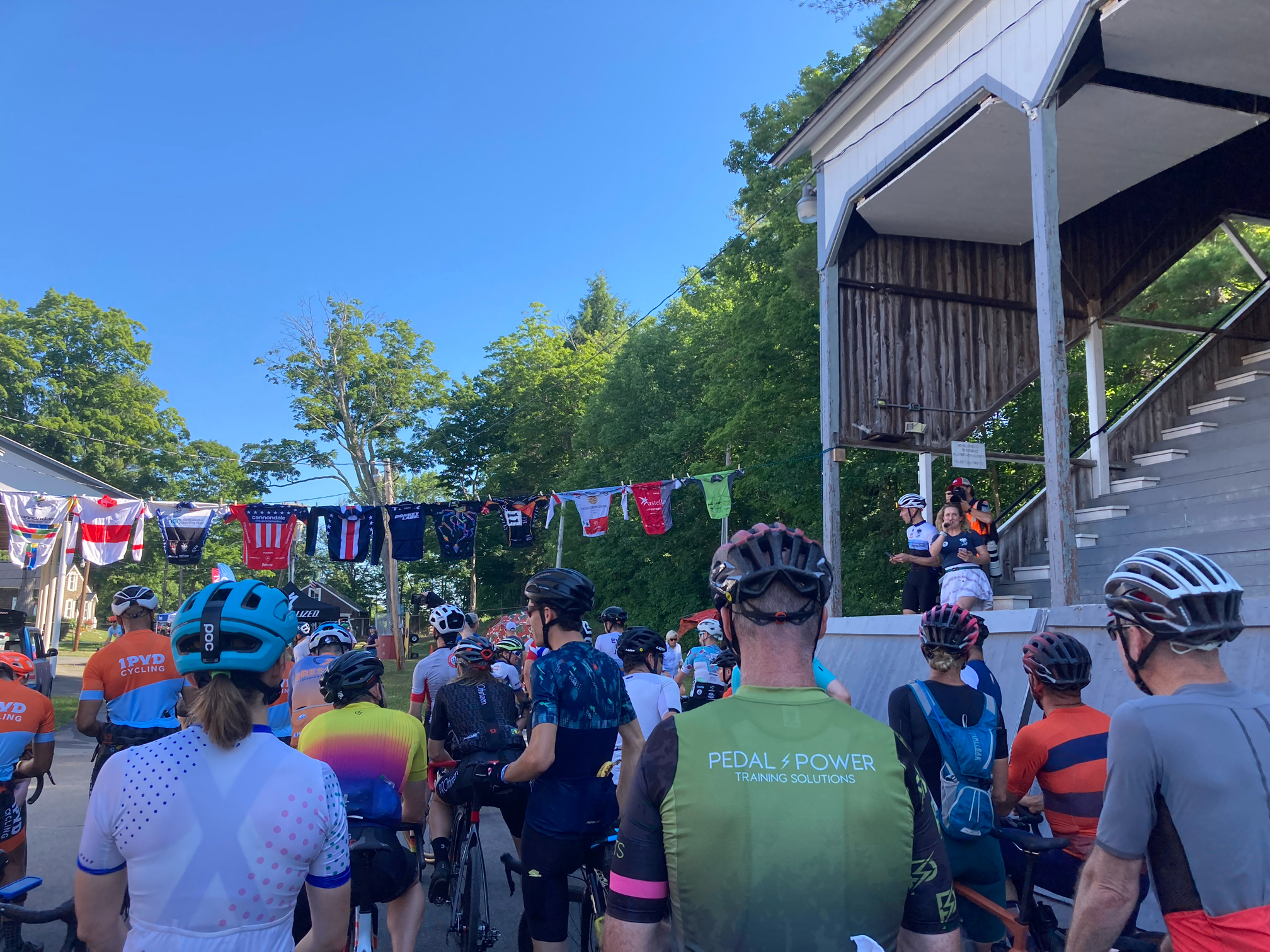 We rolled out. I quickly dropped back. The route on my Wahoo believed I had completed the route as we circled the Fairgrounds at the start. I eventually got the route reloaded and was back in business. Within the first mile, we had already hit the first section of gravel. This was going to be a challenging day.

The course was well marked. There were arrows throughout the course, signs warning of stops and dangerous corners, and even JAM members holding traffic. As we crossed Plainfield Road around mile 3.5, Ari was holding traffic for us. At mile 6.5, Sophie was directing traffic while dancing. 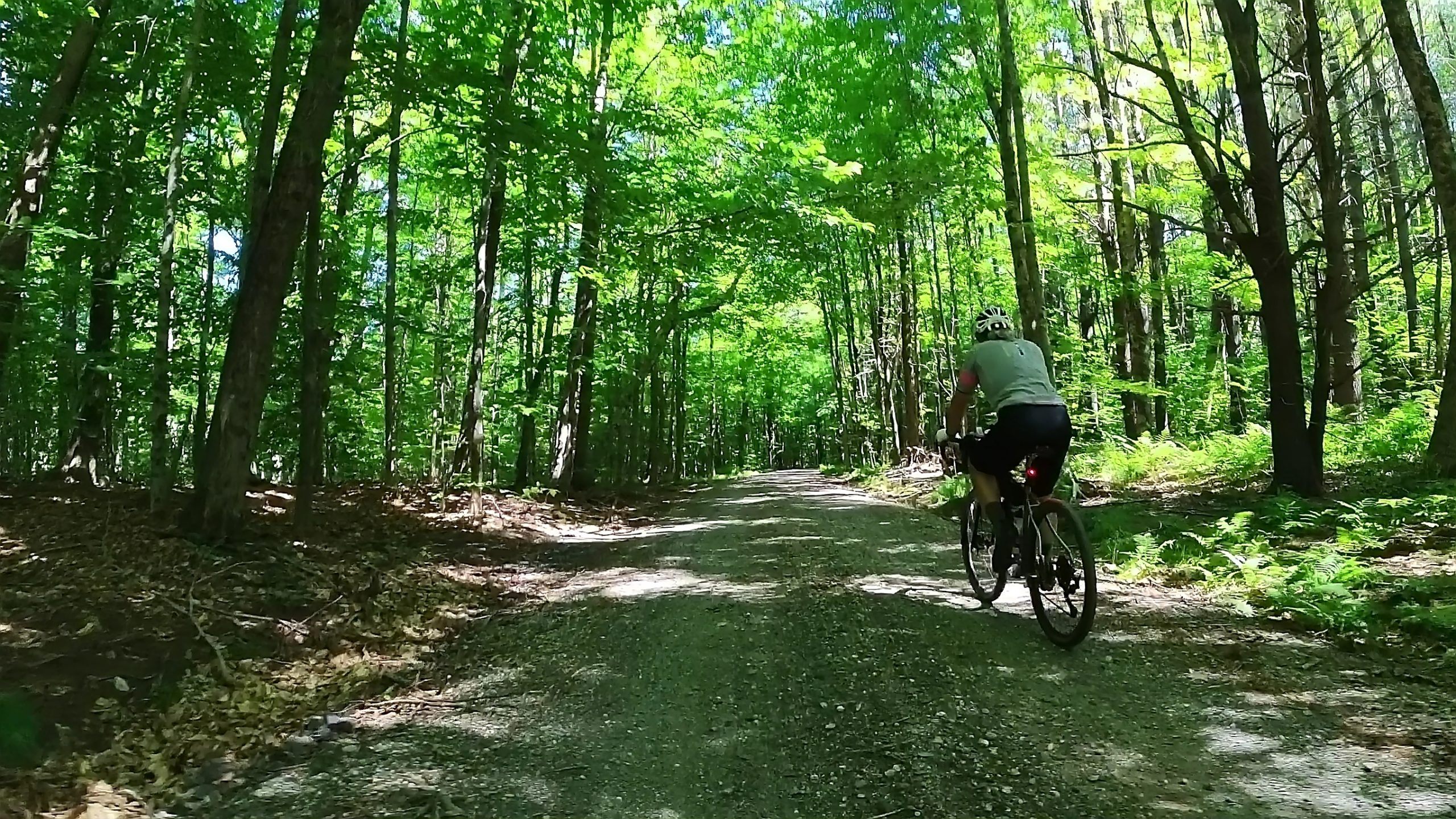 Our first rest stop was in the Kenneth Dubuque Memorial State Forrest.  We were 11.8 miles in and I had sweat pouring down my face! Granted, I’m not the most acclimated to the heat and humidity since I will ride on Zwift for bad weather, including heat.

After a brief stop, I continued on. It was only 7.5 miles to the next rest stop, how hard could it be? The answer was challenging. I was riding solo at this point. On one of the long gravel sections, I was riding in the middle of the double track since this was the smoothest portion. A rider came up behind me and I scooted over to the right track to let him pass. A few minutes later, he was riding back to me. The map on his GPS was getting him turned around. We both stopped and looked at our bike computers. We were going in the right direction, but River Road was below us and that appears to have been the cause of the confusion. We crossed a few bridges and then took a rough fast gravel descent to River Road. 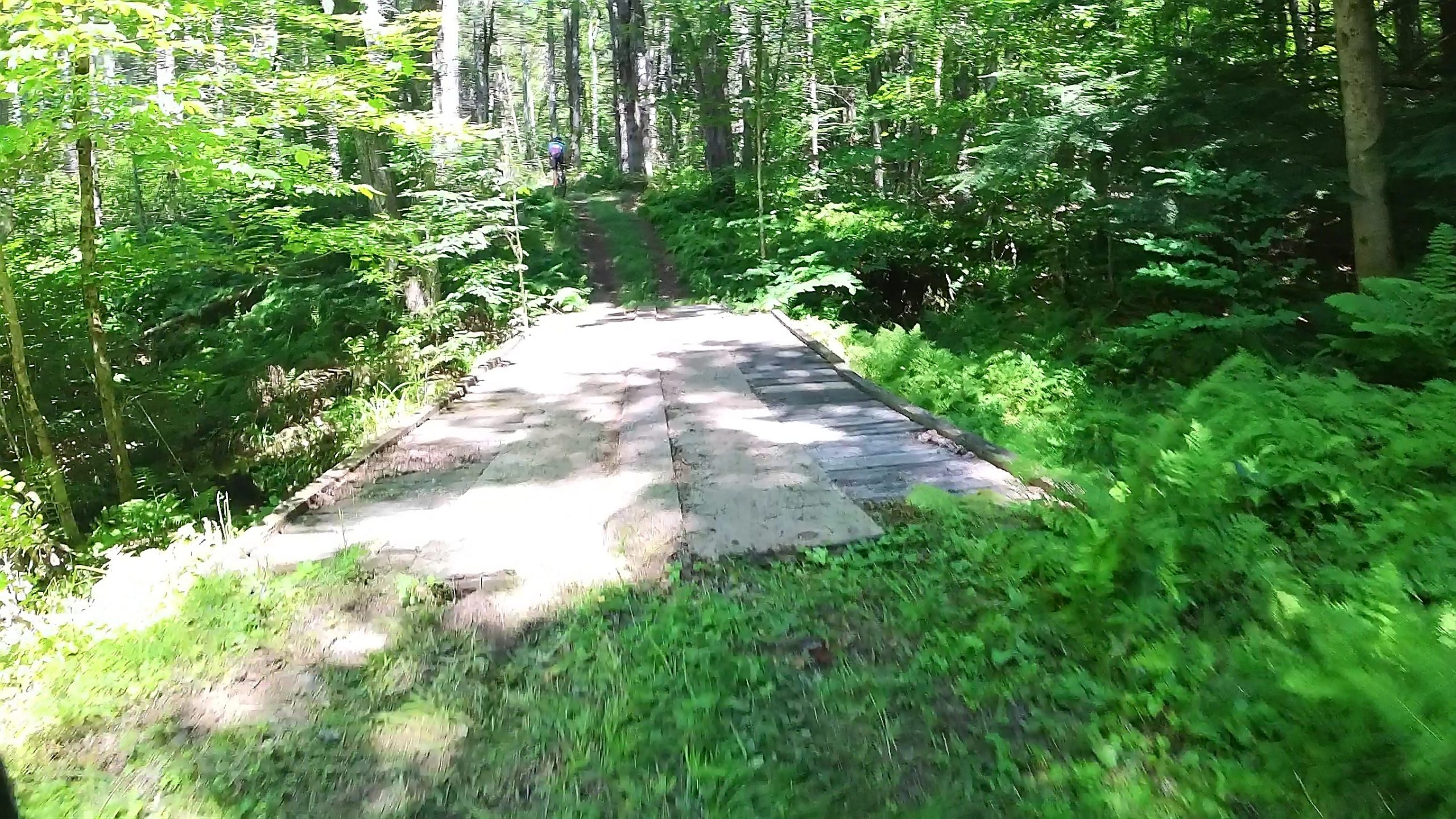 Our second rest stop was picturesque. The event had tents set up for shade next to a small waterfall dam. The bathrooms were a ways from the food tents, so I rode by bike over to them. There was a women in a DCR shirt walking by and I had to ask where we were. She responded that the Windsor State Forest signs have yet to arrive. 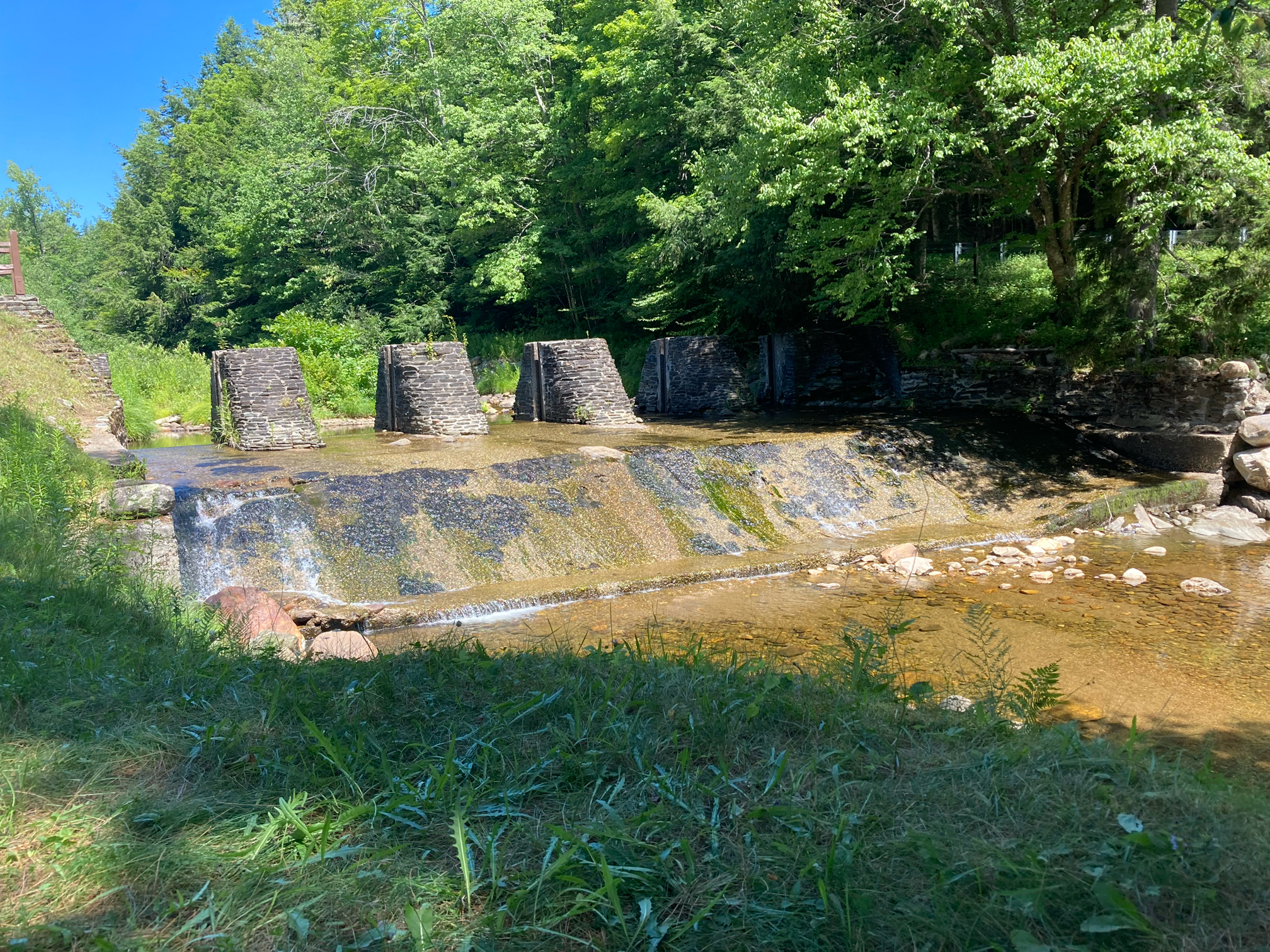 The 29 mile and the 46/67 mile routes diverged a few miles past the second rest stop. I took the aptly named High Street Hill Road and began to climb. This section was steep. After slogging up the climb, I arrived at the Sangers, the third rest stop. Under the tent, I drank an ice cold seltzer and ate a banana. This was the point that Jeremy told us we had to choose between the 46 or 67 mile routes. I was two and a half hours into the ride, so my choice was simple. I was doing the 46 mile route.

There were parts of the next section I really enjoyed (the downhills), while there were sections I did not (uphills). At this point, I was riding with a small group. As we were descending a hill, I noticed a car on the wrong side of the road. The driver was getting mail from his mailbox. He drove across the road and into his driveway. The rider ahead of me squeezed her brakes, but was able to make it through unharmed. When I caught up with her later, I told her that could have been bad and she agreed.

The ice cream truck that was parked at the Sena Farms rest stop was a big motivating factor. Sitting in the shade with an ice cream bar was rejuvenating. The two SAG Land Rovers were also taking a break. That was definitely the correct vehicle choice for today’s rides. Only 11 miles left. 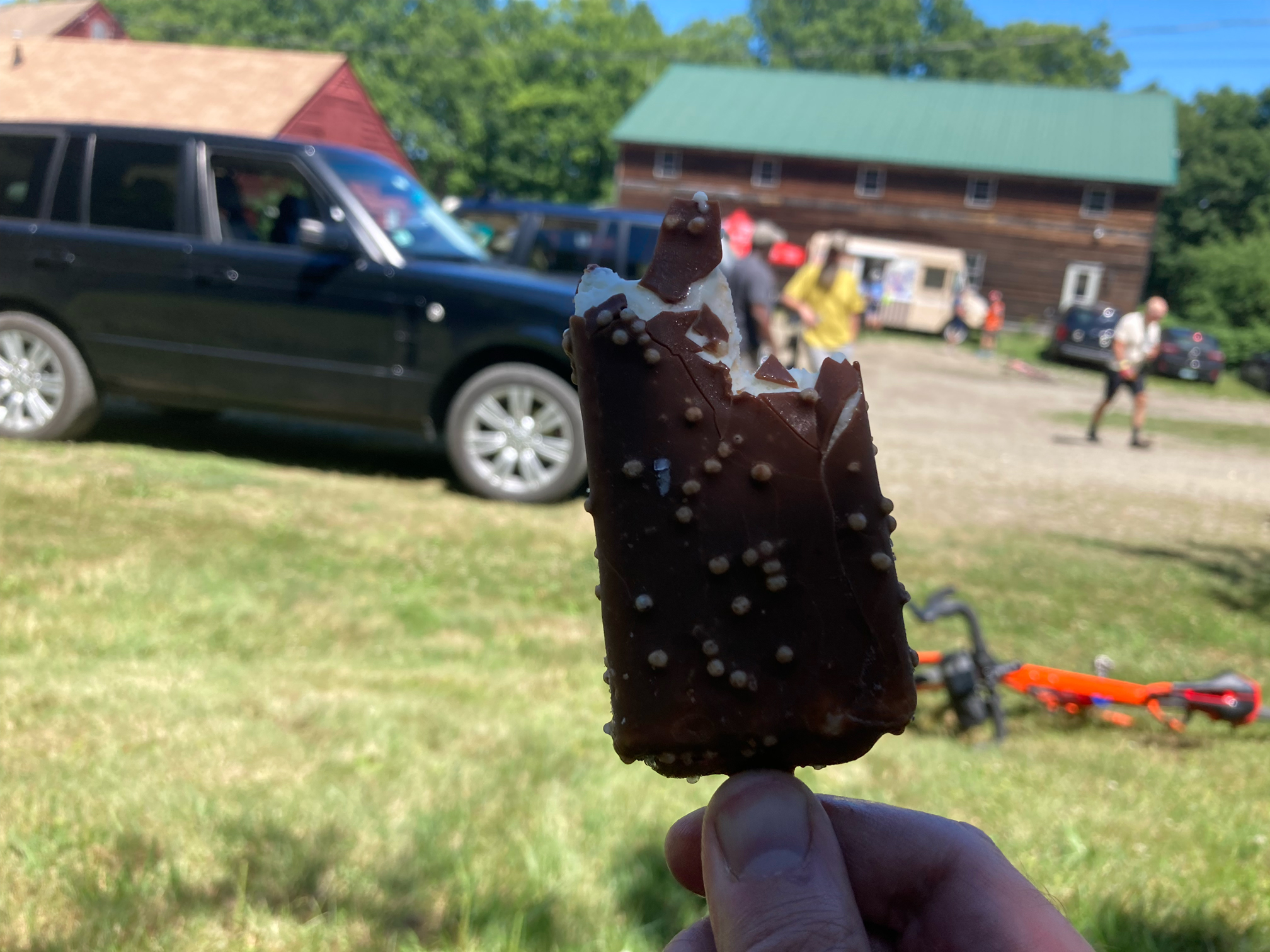 The next five miles were fun, with some nice paved or smooth gravel descents. Then the pain started. There were some very sharp climbs to end the day. Granted, I had nothing left in the tank, so they may not have been that bad in reality. Throughout the ride, locals were very supportive and cheered us on. It was very encouraging. Towards the end, I got a nice cheer from a couple getting their mail. 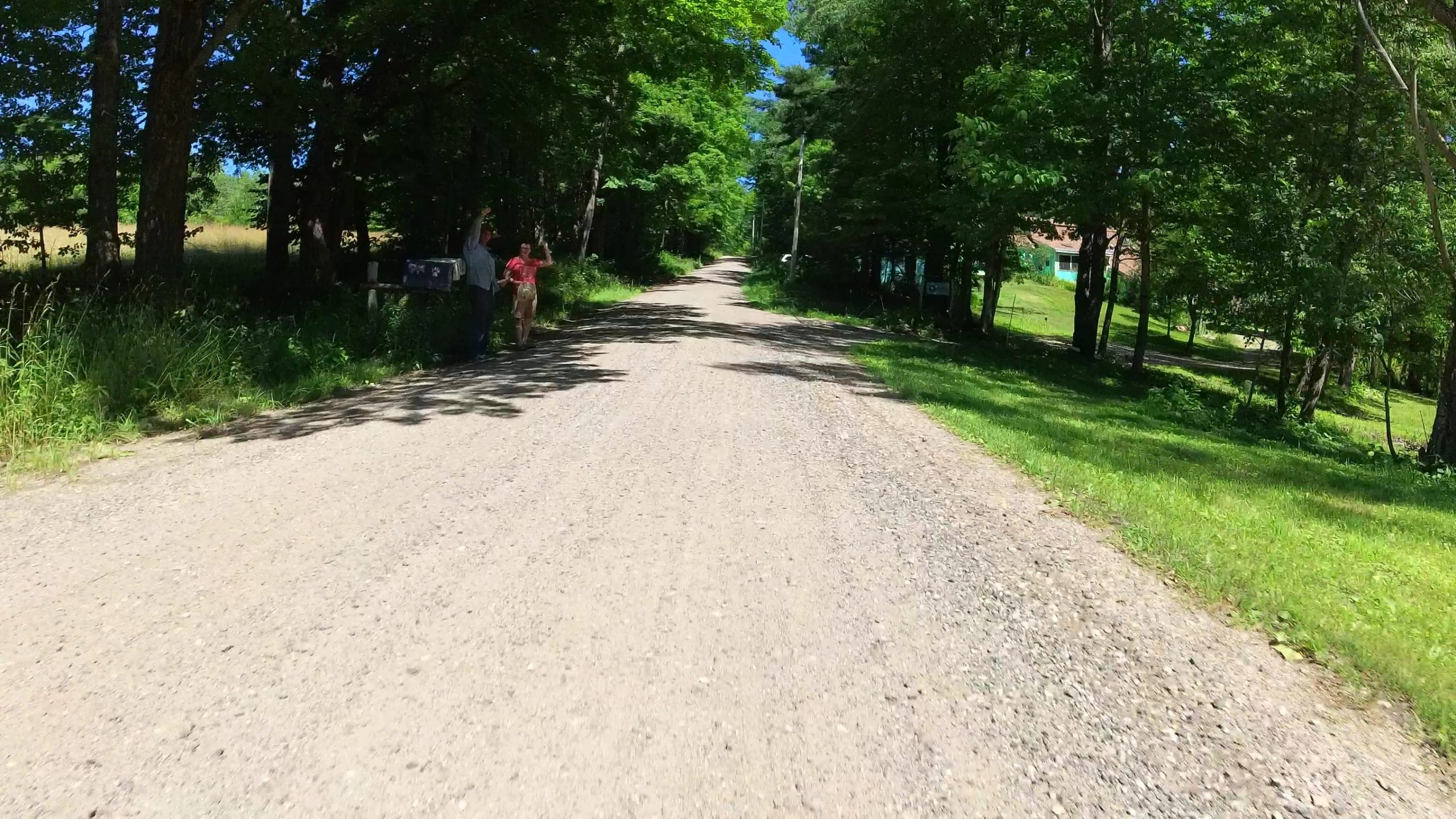 For the ride, I logged 46.22 miles (28 miles of gravel) with 5,151 feet of climbing. At 4 hours and 40 minutes, I made the correct choice of riding the medium route. I would have been on the course for another two hours if I had done the 67 mile route.

After the ride, food from the Chesterfield General Store & Cafe was very welcome. As I was eating the band, The Mary Jane Jones, was playing on the main stage. Then Ellen served as the master of ceremonies for the distribution of grants to up-and-coming athletes who pledge to promote the sport of cycling through community service and stewardship of the sport. 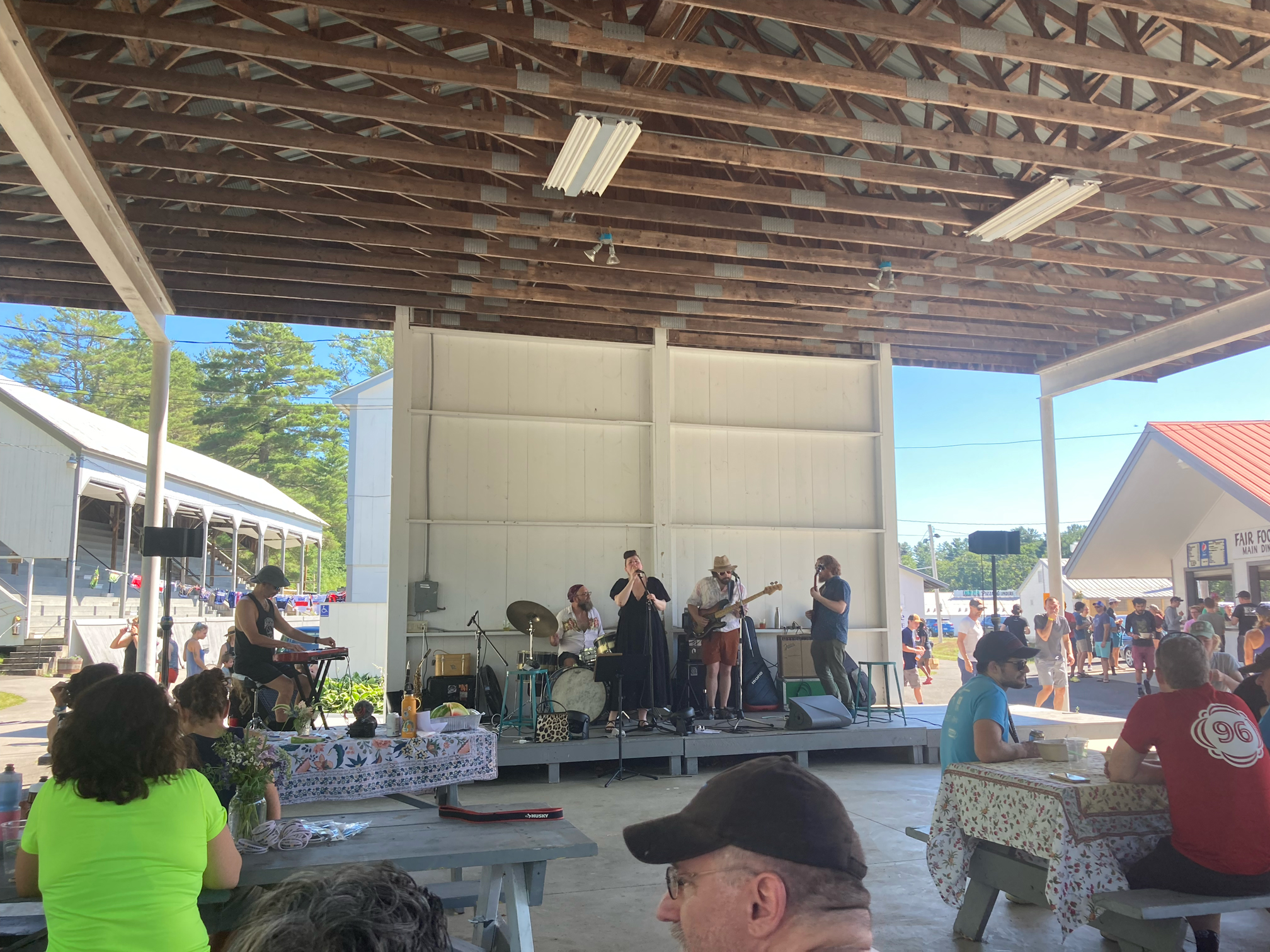 Many sponsors donated prizes for the raffle. There were water bottles, sweatshirts, coffee, books, tires, etc. Somehow, I won the cleaning kit, which I will use to clean my very dirty bike! For the grand prizes, a wheelset and a bike frame, there was a twist. After three finalists were selected for each prize, the finalists had a competition. The first one to dunk Jeremy or Ellen in the dunk tank took home the respective prize! With the heat, being dunked may not have been the worst thing for Jeremy or Ellen. 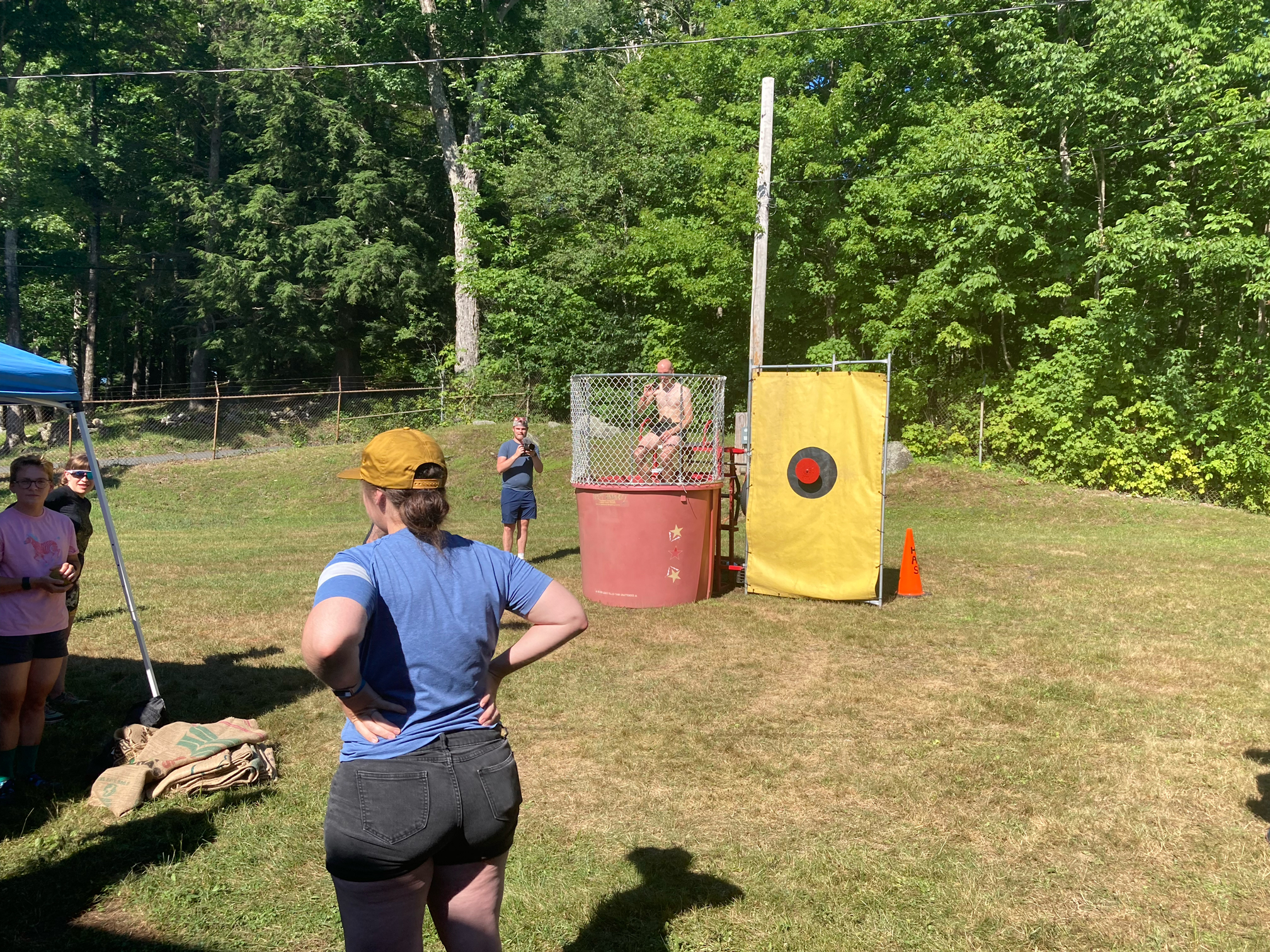 It was a fun, extremely hot, and enjoyable day. Although there were riders from throughout the country at the Fundo, it was fantastic to see so many NCC riders. I’m looking forward to next year. Now for another recovery nap.