With the weather forecast telling us the temperatures would be in the high 90’s (F) for today, I moved the ride start to 8AM hoping to beat the worst heat of the day.  (Spoiler alert: it really did not matter!)

Every route I choose is designed based on the weather conditions, and in this case, I wanted to get the direct sunlight sections out of the way early, and make the return home more in the shade- all while making sure we pass enough spots to hydrate, and finally try to make it a notable/decent/challenging ride.  A clockwise loop up to Bernardston, with the Eden Trail climb being the main event in the middle of the ride, seemed to fit the bill today.

Six heat craving (?) riders arrived at Pulaski, where the temperature under clear skies was already 75 degrees (F).  We set out at a social pace the usual Wednesday Night Ride route (this is getting the oven out of the way early, or so I thought!)  The pace up to 116 was reasonable and we stayed together, but eventually had to stop being social and get in line.  Once we crossed 116 to River Rd North, we gapped at the small climbs. I never saw the front group until the Deerfield bike path at the tracks and wondered what happened to the B ride!  We saw Roger S. heading the other way- turns out he rode the same route backwards, and started at 5:30 AM.  Good idea!  Once we got everyone together, we carried on the bike path past the beautiful canals in Turners Falls.  We met up with Wendy and Keith along the way, making us eight, to our first rest stop downtown Turners Falls.

Next we headed over the river into Gill.  There are plenty of ways to get to Bernardston, but one of most beautiful is Hoe Shop Rd.  It is paved for a while, has some quick risers, then turns to well maintained dirt that is a fun descent.  Back on the pavement at the top of a little rise, there was a beautiful goat in someone’s front yard.  Melissa had a bit of a panic as she reached for her phone to take a photo of the goat… no phone!  Perhaps it was lost on that fun dirt descent?  We were happy to rest up our legs while Wendy lent her phone, so Melissa could phone home- her husband did the “find my phone” thing- it was back in her car in Northampton!  Whew!

And now for the main event.  I discovered the Eden Trail climb in 2013, which was my first full year of cycling.  I was participating in the Will Bike 4 Food ride (their third year).  This is a great destination, it is a little further away from Northampton than our average rides, but it is one of those climbs that you should try.  It is quiet and beautiful.  There is a 13% in there, but it flattens out a bit to give a reprieve. But it keeps going and going.  Needless to say, we all split up on the climb, even over the second portion Fizzle Hill.  With a regroup down the bottom, ready for more miles.  At this point, most of the climbing has been in the shade, with the occasionally hot sunny spot that makes me curse, and go faster to the shade!

Heading down and out of Lyden, we took the covered bridge over the Green River. Here are a couple of cool photos: 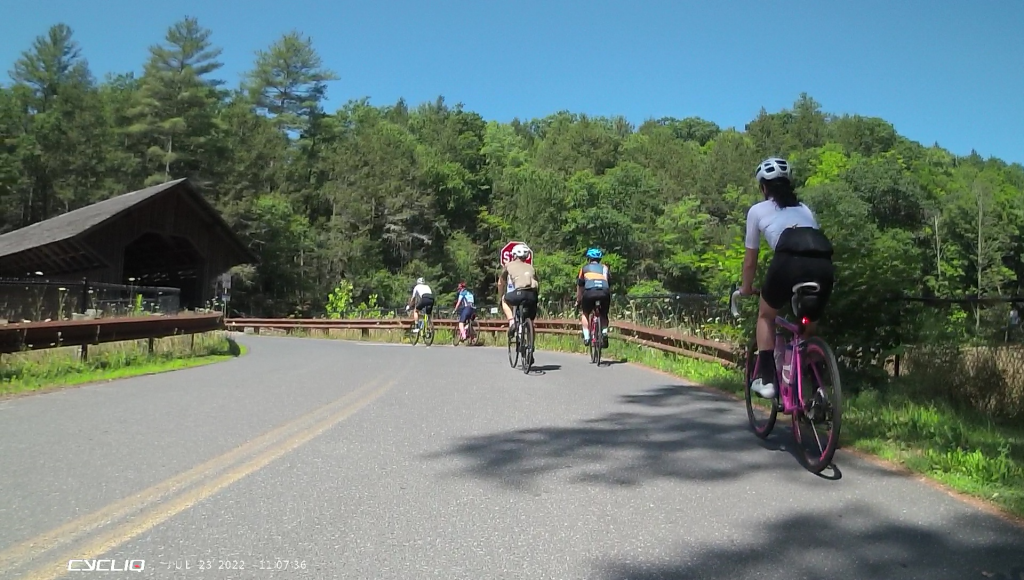 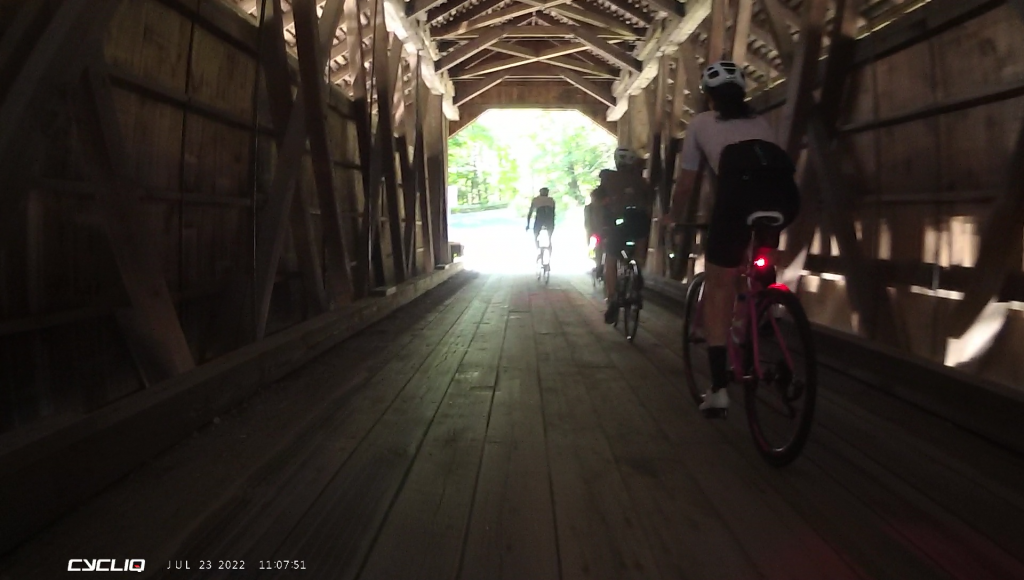 We continued into Greenfield, taking our second rest stop at Harper’s Store on Colrain Rd- they are very bike friendly!

Fueled with Coke, Fig Newtons (?), Gatorade and whatever else we could digest, the stop to cross the Mohawk Trail was a cooker!  Sometimes there was a (sort of) cool breeze, other times you could just feel the radiation from the pavement.

The way home was the always beautiful Lower Rd, but, once again a certain “front group” (haha not naming names), seemed to want to evade the heat and took off. I tired to bridge, but we never saw them again until the Stillwater Bridge.

We stopped a third time at the Neighbor’s on 116 to refuel.  As we were gulping down liquids and potato chips, we were discussing that although we just have ridden 55 miles, we still had around 1000′ of climbing to do on a 3500′ ride!  Yeah, sorry.  Not much choice- climb though Whatley, or head straight home on rte 5 in the direct sun 100% of the time.  But by now, every sunny spot was like death!  Wendy and Kieth headed back home from here while we continued on.

We took a break on Mountain St to catch our breath and agree on the pace back home.  Also decided to opt out of North Farms climb, and instead take Mountain St to Haydenvile and cross over to ride on River Road. More shade!  The (shady) bike path guided us toward Florence where folks started peeling off.  I saw 100 F on my Garmin somewhere here.

I had 71.4 miles, 3212′ climb, 16.5 MPH average,  88 degrees F average, 199 vehicles passed us, when I turned off in downtown Northampton around 1:30 PM.  This has got to be the hottest ride I have ever done. Everyone enjoyed it though and it was a great route with awesome people! 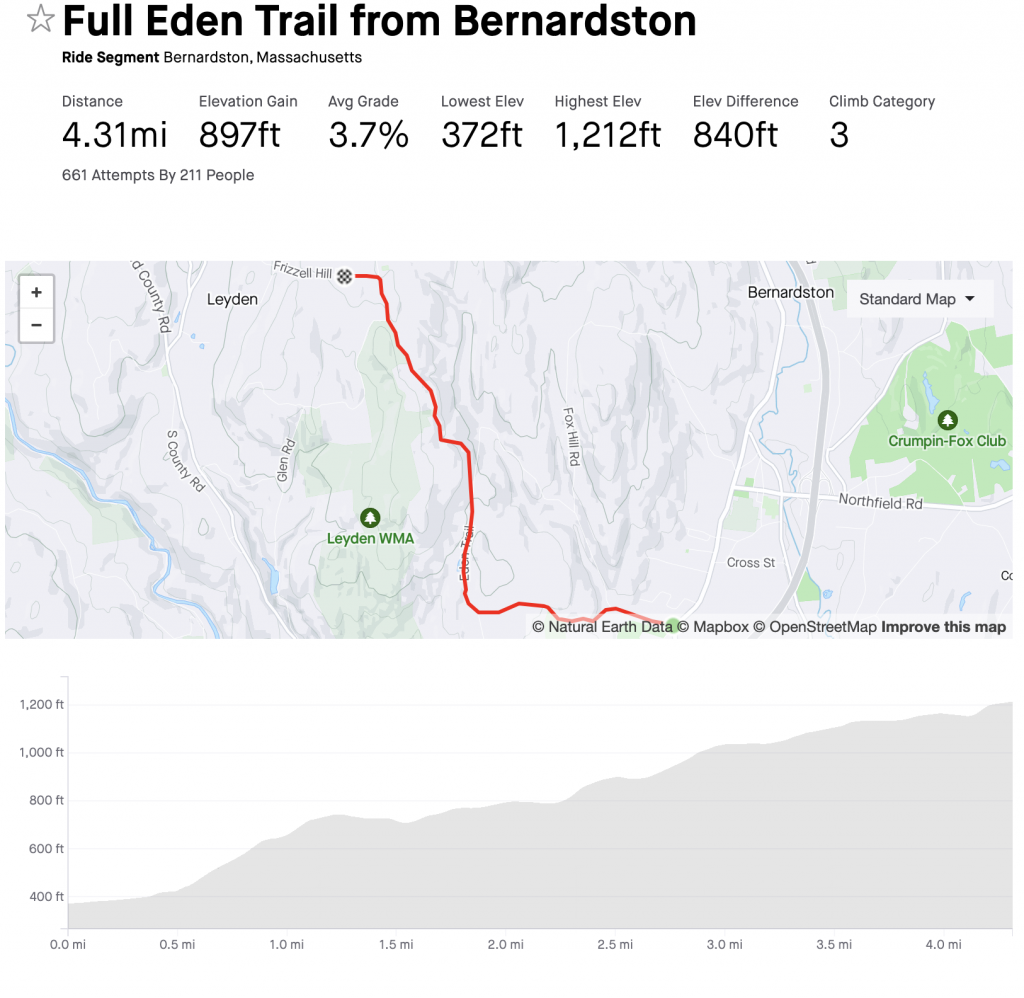