With next Saturday being the JAM Fund Grand Fundo, Tim P. and I decided to do a gravel ride. We debated several routes by e-mail, but ultimately decided on a route that started at Pulaski Park. We were hoping that other riders would join us.

At 9 AM, there were three groups at Pulaski Park: the B ride, the C ride, and our gravel ride. We had four riders (James, Mike, Tim, and me) ready to depart. Peter was ready to join one of the other rides, but decided since we were going by his house, he would ride home and switch bikes so that he could join us.

As we rode up Elm Street, the B group tagged along. I could tell that Melissa and Andy really wanted to join our adventure.

Our first gravel section started at the end of Cooke Avenue. We could not find the entrance on the map, but had a nice little tour of the condos at Pine Edge Drive. Fortunately, James knew of an entrance, so we followed him. I had never ridden this section before. It was quite rocky and there were several sections of walking the bike over small bridges. The area might be better on a mountain bike. It took us a while to navigate this section before we came out on Coles Meadow Road. 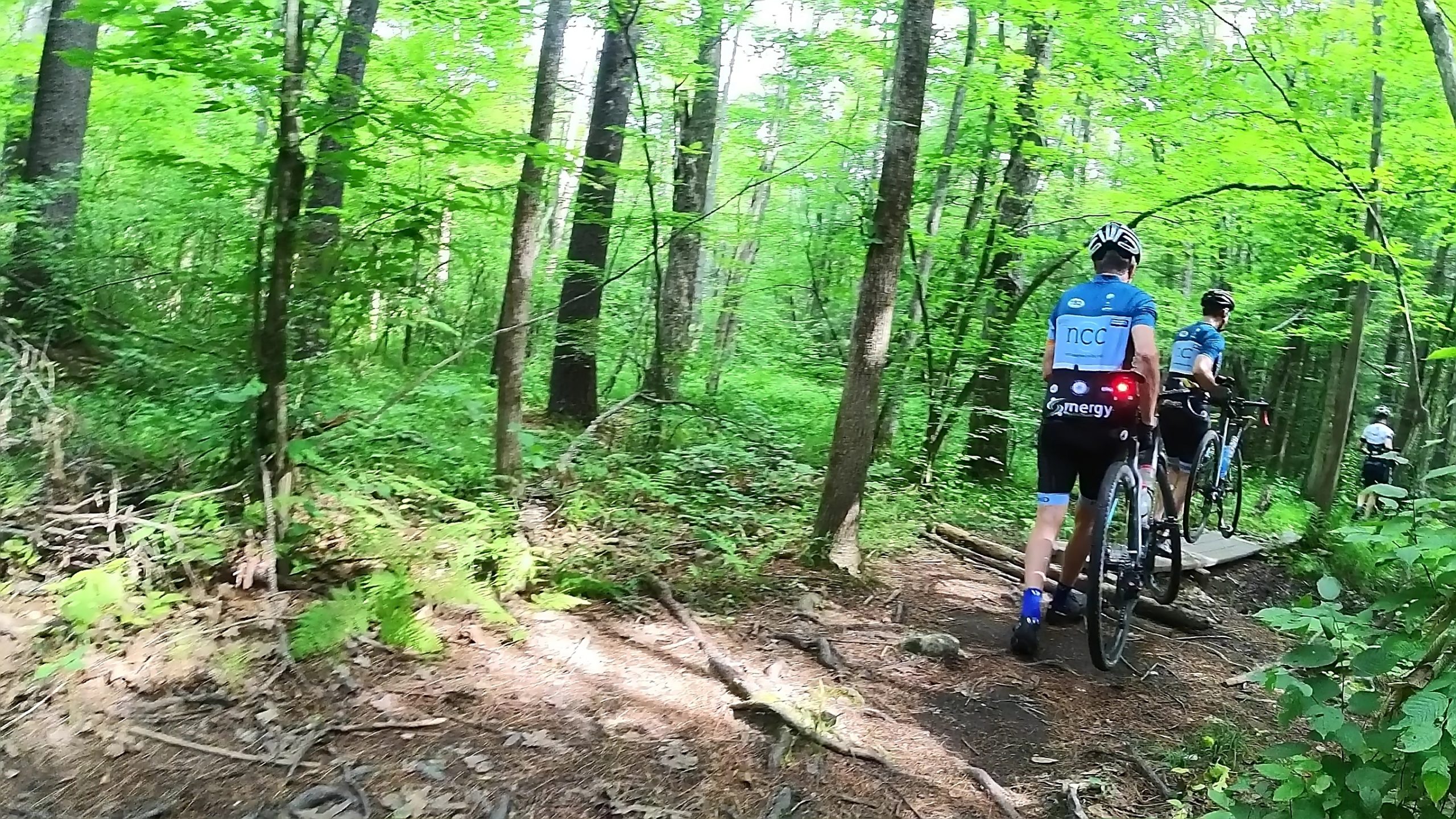 We cruised to the next dirt section on Rocks/Mountain Road. Just past the Christmas tree farm, Tim suggested we take the path through the field that connected to Westbrook Road. None of us minded skipping the descent down Mountain Road and the climb up Westbrook! We encountered a small bulldog leading an ATV. The driver of the ATV stopped and picked up the dog so we could pass.

Popular Hill is a short but challenging climb. The four of us made the climb and then turned into Peter’s house just before the road turned to dirt. We stopped for a few minutes to admire the view and restock our bottles. 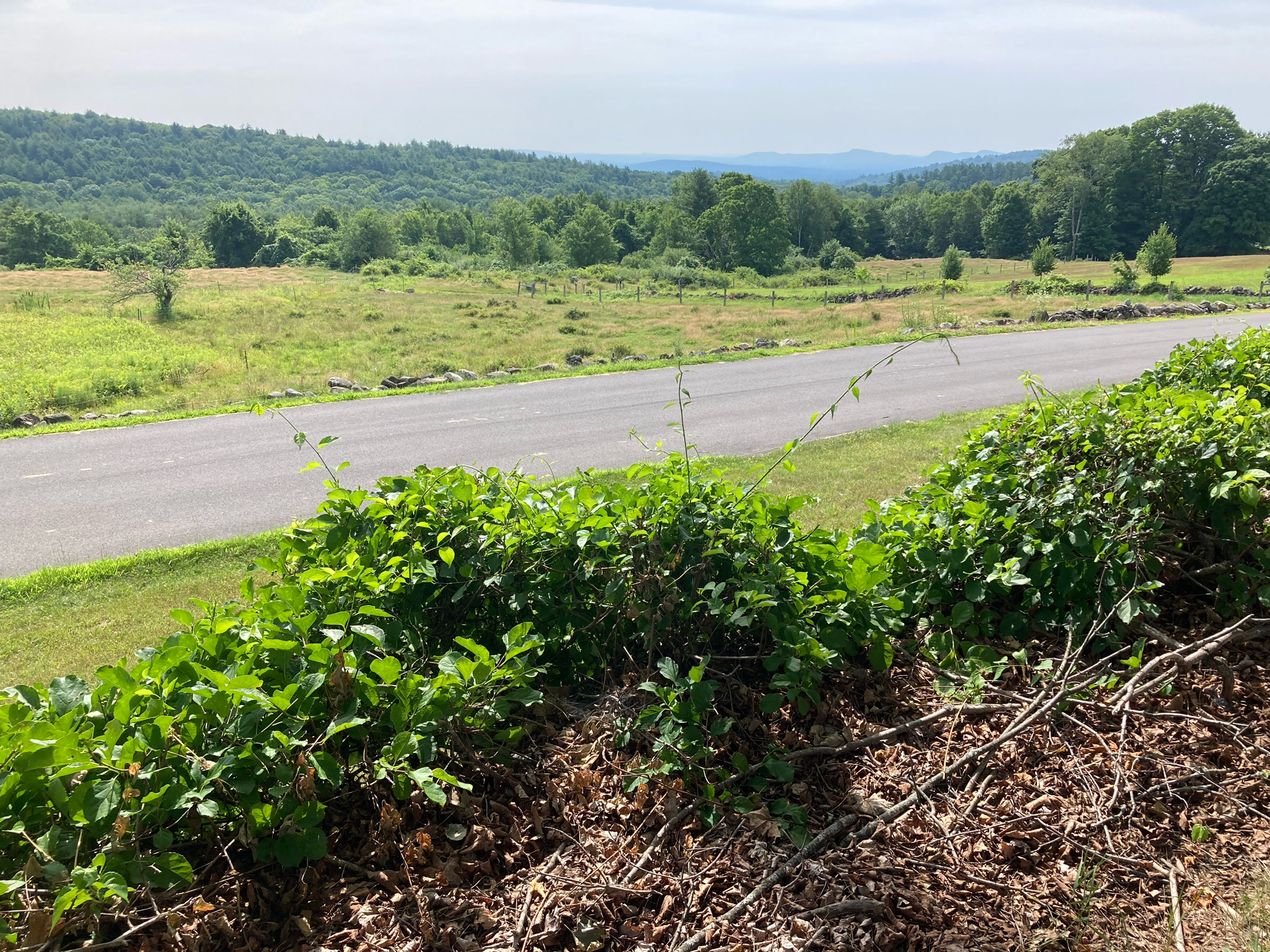 Peter gave us a bike tour of some of the trails he had built. As we continued on, we passed Smith College’s MacLeish Field Station. James explained how the the observatory was recently disassembled from the field station.

After the single track, we turned onto Roaring Brook and went up and down the rolling dirt hills. We got a bit spread out when we got on the pavement. I was last and encountered a very excited dog. He chased me for a couple of hundred yards. I believe his name was Murph, since his owner was screaming at him. Fortunately, I escaped unharmed. 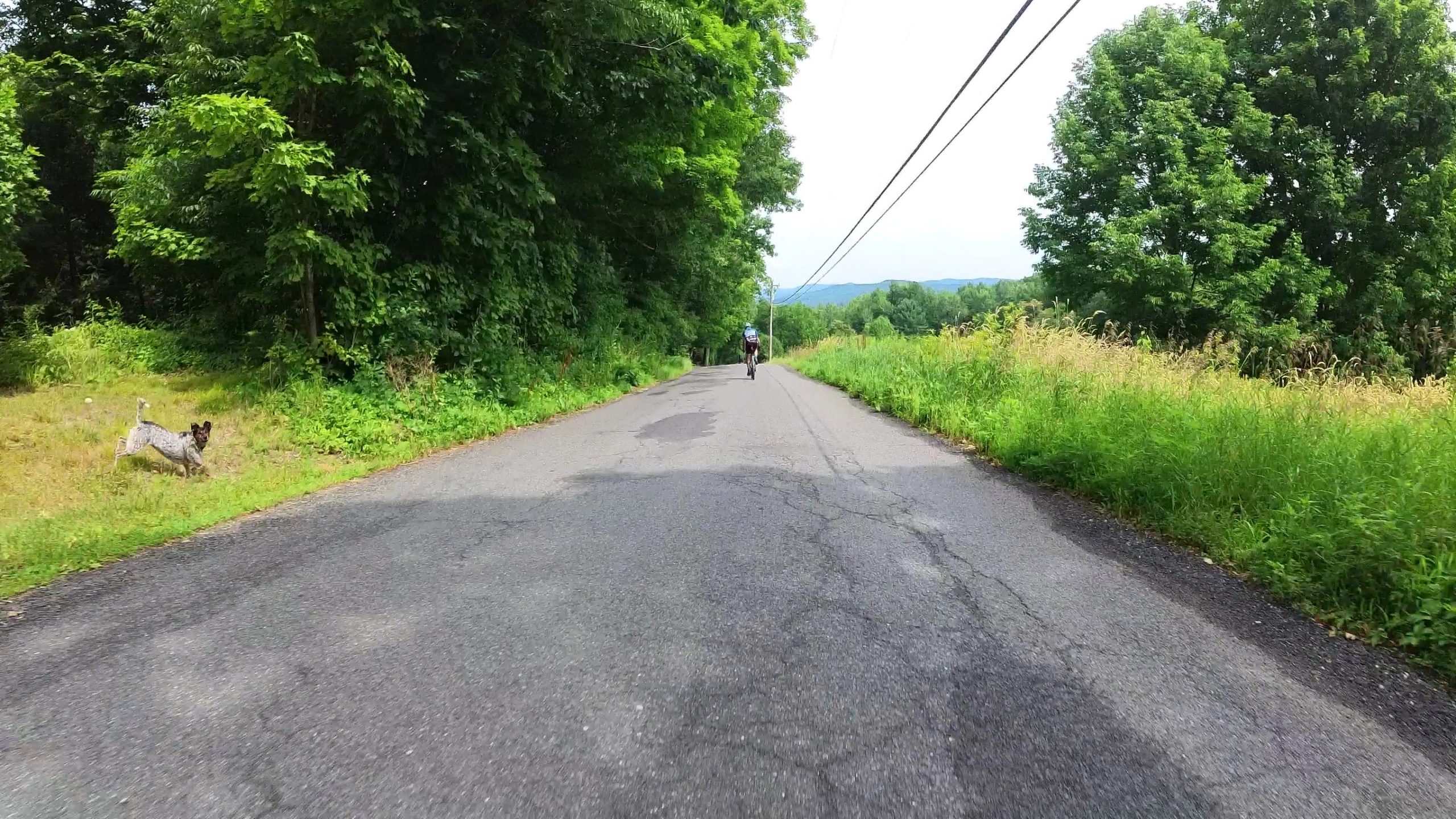 At this point, Peter altered our route to some very beautiful but challenging roads. We went by Shelburne Falls Road and Pine Hill Road. We even saw the former house of the late Archibald Macleish, the namesake of the Field Station. When we arrived in downtown Conway, Mike and James headed back to Northampton. Peter, Tim, and I stopped at Bakers Country Store. Tim got a muffin, while I ate a Kit Kat to try and restore my energy. 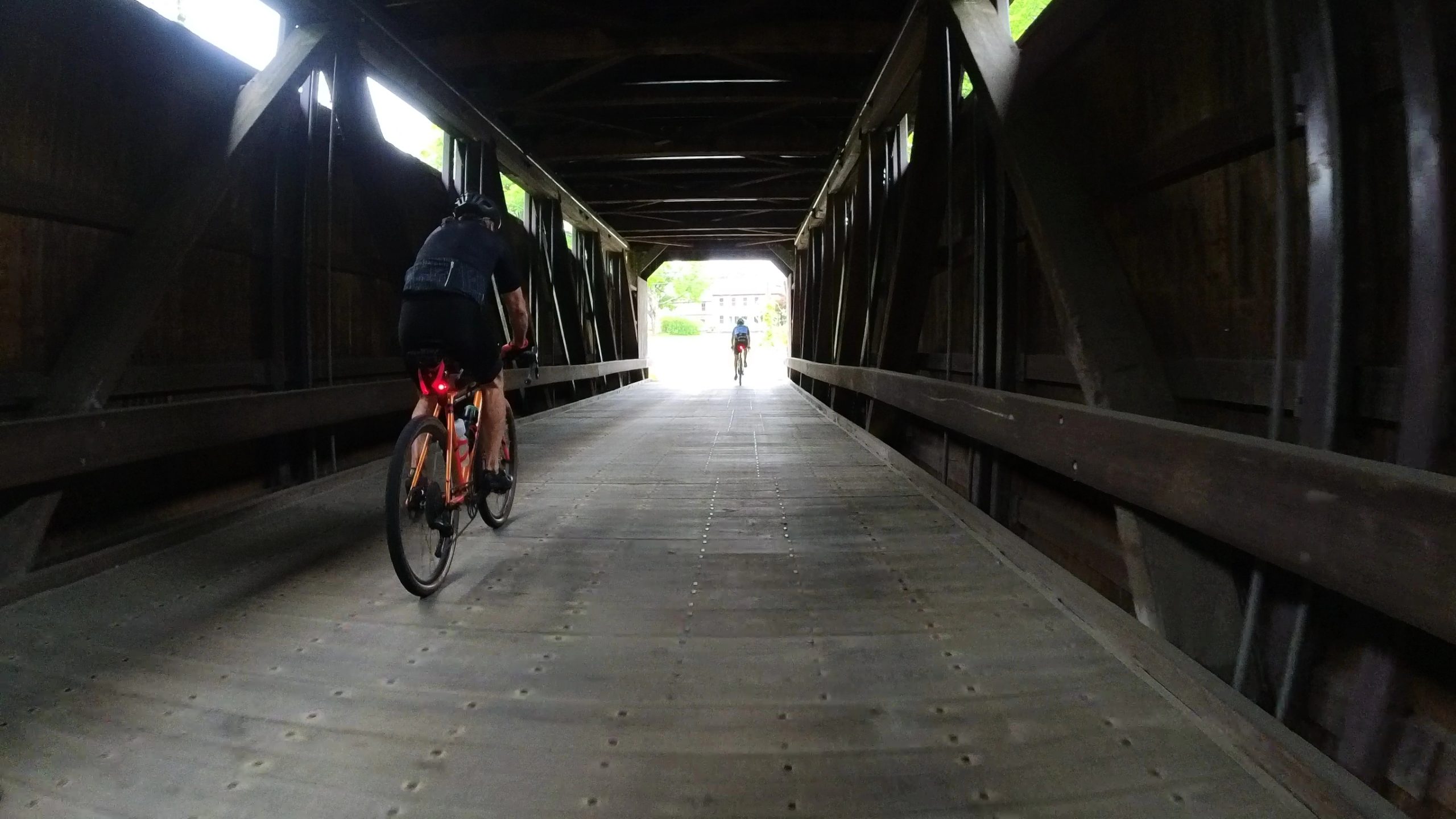 After our snacks, we climbed Main Poland. Somewhere in this area, Peter departed. He took a trail that would get him home. Tim and I continued. At this point, our pace was a little more relaxed. We had a few sections where we had to walk the bikes, including hurdling downed trees. 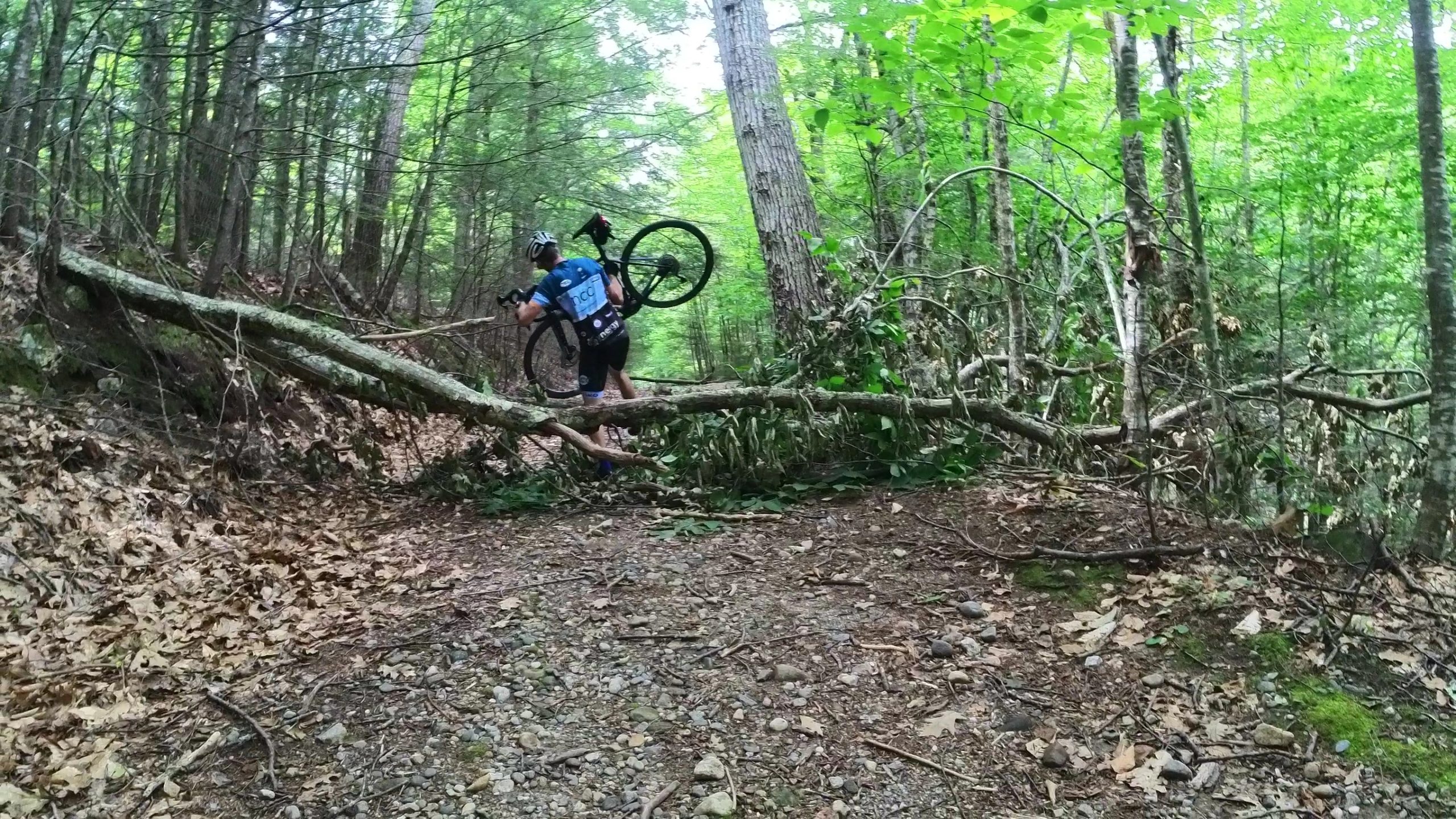 After that, it was mostly downhill the rest of the way. We descended Wing Hill Road on the edge of the DAR and headed for Williamsburg.

I have never seen Williamsburg so busy! There seemed to be town-wide tag sales and other events for the 250th anniversary. Tim and I decided to head back to Northampton and skip the final few sections of gravel. With Peter’s detours, we had already covered our allotment.

Turning off of Spring Street and onto Pine Street in Florence, Tim encountered a pickup truck that was not pleased to see cyclists. We continued on. As we ascended the final hill by the high school, there was a deer scurrying across the road. By Childs Park, Tim and I said goodbye and headed our separate ways.

In total, we covered 48 miles with 4,000 feet of climbing. We rode for approximately 4 hours and 30 minutes. Hopefully, today’s ride will only assist us in completing the Grand Fundo next weekend.