The annual Bikes Fight Cancer charity ride was held on Saturday at Tree House Brewery in Deerfield. The Northampton Cycling Club sponsored one of the rest stops for the event and had several riders participating.

There were three ride options. At 8 AM, the 50 mile all-pavement route and the 50 mile classic route (just a little dirt) departed. At 9 AM, the 25 mile route commenced. Today’s event was sold out with 207 riders. The BFC ride raised money for the Dana-Farber Cancer Institute.

I rode the 50 mile classic route with my friend Steve, who is on the Bikes Fight Cancer team. We volunteered in advance to be sweepers for the ride. Tom joined us as well. Originally, we were supposed to depart around 8:15 AM so that we would give everyone else ahead start. Johnny, the BFC organizer, changed that plan when he asked us to depart a few minutes early so we could assist at the four-way stop sign in the center of South Deerfield by Wolfie’s Restaurant.

Despite the calendar saying it was the middle of June, it felt like autumn today. I wore a florescent yellow windbreaker for the entire ride. This wardrobe choice was ideal for directing traffic in South Deerfield. The groups of riders seemed to appreciate not having to pause at the stop sign and the cars seemed content to wait.

Once everyone went through, Steve, Tom, and I remounted our bikes and proceeded down Sugarloaf Street. Although Steve and Tom had just met, they grew up in the same area, so they had plenty to chat about.

As we passed Pine Nook Cemetery on River Road, we started catching up to a few of the groups. There were many groups with matching jerseys, many with Pan-Mass on their kits. There was even a team in red with individuals’ names and numbers (like on a football jersey, but for cycling).

In Greenfield as we approached the bike path on Depot Street, we encountered our first rider with a flat tire. Steve was carrying extra tubes and multiple patch kits and was ready to swing into action as an official sweeper. Alas, the rider, who was with a small group, waved him off.

I really like riding the bike path by the canal in Greenfield. With the high winds, there were little waves forming on the water. As is customary, we had a momentary pause as we attempted to get off the bike path and onto the bridge on Avenue A. It always seems to confuse us.

On West Gill Road, we encountered three impressive riders. The first was riding an elliptical bicycle. Tom and I debated what this was actually called, but apparently it is simply an elliptical bicycle. The woman was very fast on it and she even rode the gravel sections later in the route. The second and third riders were on a tandem bike. Fortunately for the pair, today’s route was not too hilly. 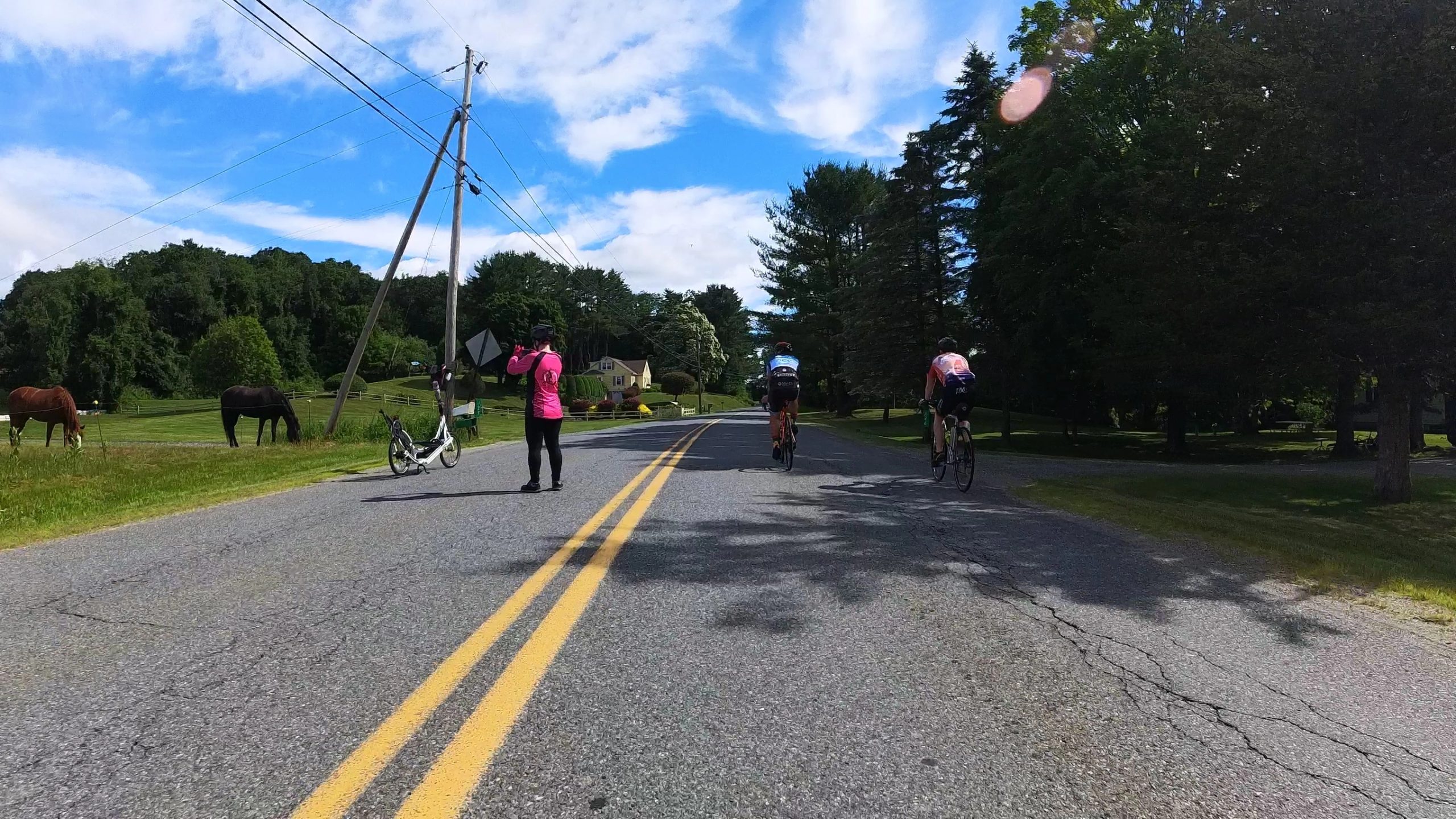 A little past mile 21, we had our first rest stop of the day at the Gill Elementary School. The sun peaked out while we had our break and I debated if I should take my jacket off, but the wind was still howling, so my NCC jersey remained covered. Fortunately, Tom was hardier and displayed his jersey with pride.

On Route 63, my chain popped off. I was able to successfully pop it back on by shifting, but since I was in the rear of our trio, no one saw this impressive feat. We came upon another rider with a flat,  but we were waived off again.

Around mile 29, we turned off of Route 63 onto Pine Meadow Road. This took us by large horse farms and the Brewery at Four Star Farms. Today was also the Pedal to Pints ride and judging by the number of cars at the brewery, that event started at Four Star Farms. Then we hit the first gravel section.

There were about 2 miles of gravel in total on this route. The first section was the roughest, but in reality, it was pretty gentle. It appeared many riders were unaccustomed to gravel and did not enjoy it. These riders may have missed the turn for the pavement-only route.

Tom had never ridden in this area of Northfield before, so we stopped briefly at the Riverview Picnic Area to show him the view. We finished the first gravel sector and continued on to the bike bridge above Millers River. We stopped for photos, including a group selfie. 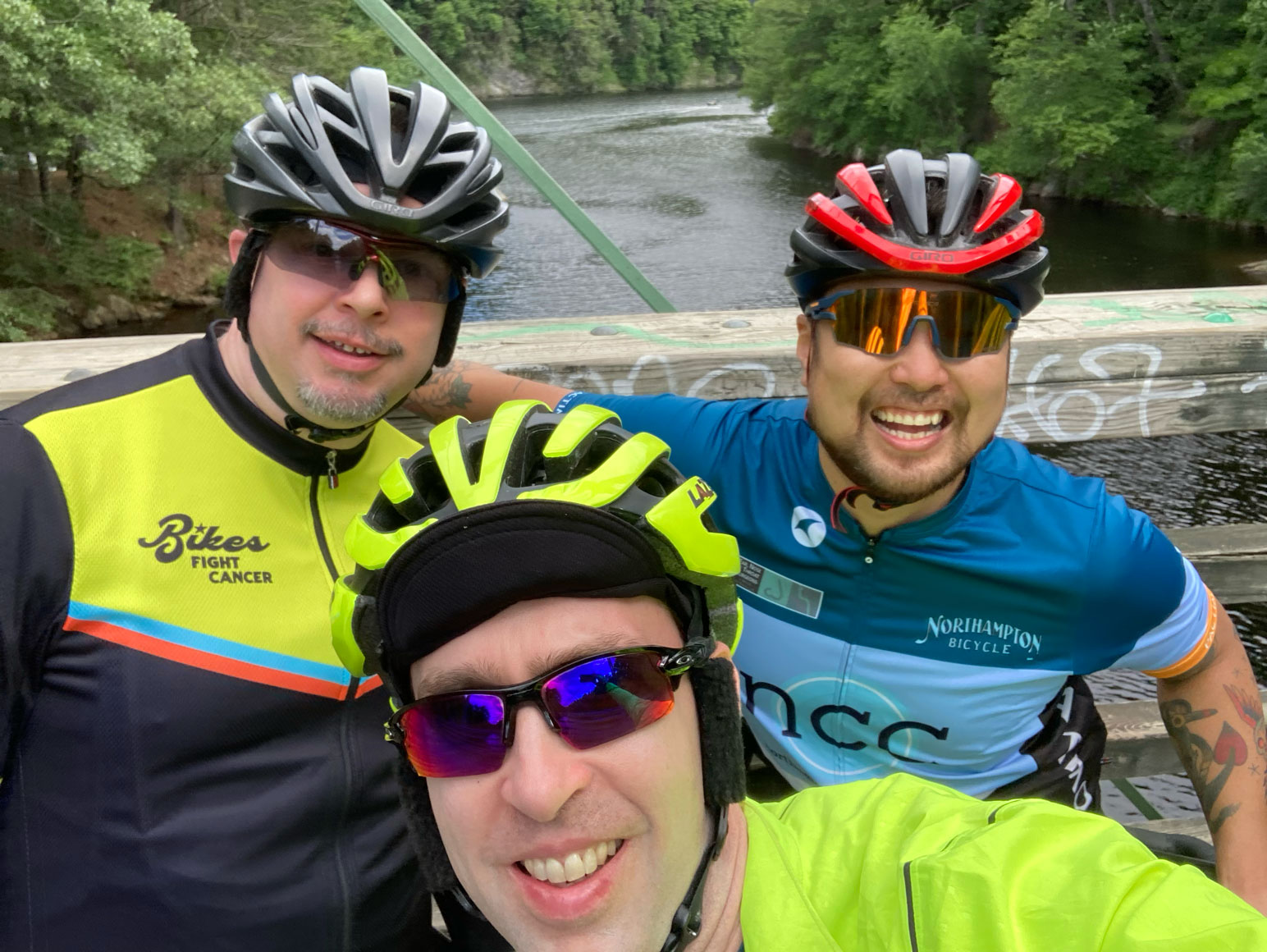 At the corner of East Mineral Road and Millers Fall Road, there were a few cyclists ahead of us. We watched a young woman slowly tip over as she could not unclip. She was fine and picked up her sunglasses and kept going.

Just before turning onto Lake Pleasant Road, I stopped and picked up (or as a sweeper, swept up) a pair of sunglasses that were on the ground. Our trio accelerated and we caught up the the group ahead. I asked the young woman if she had dropped her glasses. To her surprise, she had and I was able to pass them back to her.

Our group had planned a small detour to see the Bridge of Names. Tom overshot the turnoff. Steve and I shouted his name, but he did not hear us. I made the turn and waited, expecting them to turn around. While waiting in the residential neighborhood, a child was riding her bike over a small ramp and offered to let me try it. I passed, but appreciated the offer. After a few minutes, I realized they must have taken the next turn and I proceeded to the bridge. This was Tom’s second new sight of the day. If you have never stopped at the Bridge of Names, I recommend it. 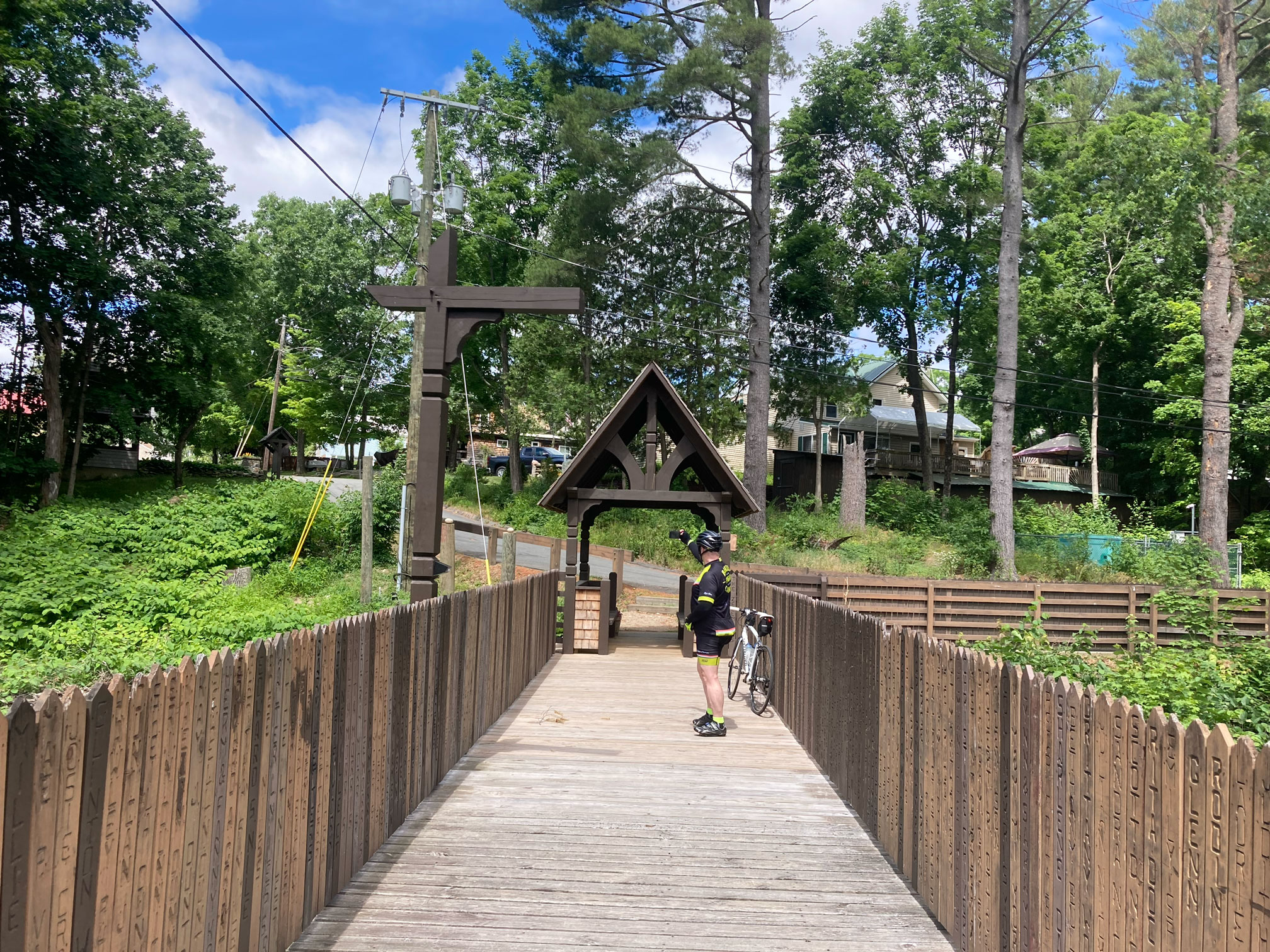 The final gravel sector started immediately after our detour to the Bridge of Names. Old Northfield Road is compact dirt, so it was not that different from pavement. We navigated the back roads of Greenfield before our second rest stop at the “Leaning Barn.” For some reason, I was expecting a business named the Leaning Barn, but it was truly just a barn that had seen better days and was leaning. Since we were sweeping, we hung out at the rest stop for a while allowing more riders to get ahead of us. We only had eight miles left to ride.

At the Sunderland Corner Store, there were many riders waiting at the traffic light to turn onto Route 116. For some reason, a women rolled down her car window and started yelling at us. She wanted us to stay on the bike paths, which was humorous since we were actually in an official bike lane. Tom responded with politeness, which seemed to frustrate her more. The light changed and we headed over the bridge to Deerfield.

As we arrived back at the Tree House Brewery, I realized that we never had a tailwind for the entire 50 miles. We crossed the finish line, completing the riding portion of our adventure. In total, we rode 50 miles with 1,946 feet of climbing. We rode for 3 hours and 20 minutes.

After packing up the bikes, we joined the party. 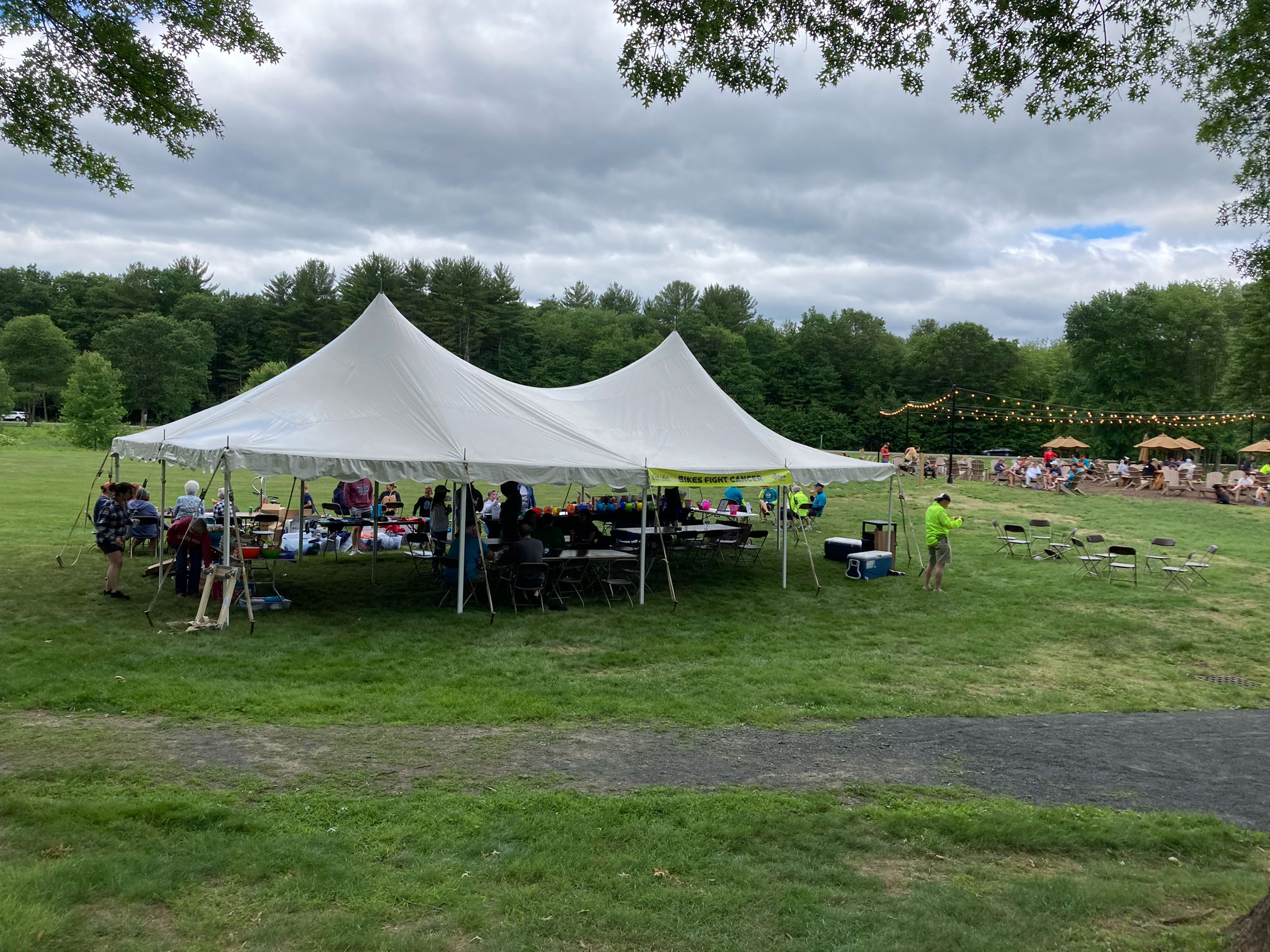 As we walked over the far side of the brewery, we bumped into one of the NCC presidents, Jonathan, and Bob. They rode the 25 mile route but started up at the DAR, so they actually put in more miles than we did.

There was food, drinks, and a raffle. Steve purchased 26 tickets and divided them between the two possible Lego drawings. He was successful and walked away with one of the Lego prizes.

It was a fun day of riding for a great cause. The BFC ride raised over $43,000 (and counting) for cancer research. If you are interested in donating to the BFC team, please visit their Pan-Mass Challenge donation page.