Ten riders rolled out of Pulaski Park for the Saturday Morning C ride. Then we picked up two more riders at the beginning of North Farms Road. Wind has been a fairly constant companion this year and today was no exception. The prediction was for a NW wind of about 12mph but in areas such as the climb by the reservoir on the way to Conway it was like being in a wind tunnel. Gaps between riders became inevitable and, under today’s conditions, were hard to minimize.

At the Rt. 116 regrouping in Conway we decided to make a couple of changes. The first was to regroup more frequently for better cohesion, and the second was to divert from the 116 descent to Mathews Rd and, instead, take Reeds Bridge Road to Graves Road to Mathews. As one mentioned, that way we would avoid the 50mph curve of death on 116 trying to get to Mathews. As it turns out it was a fun bit of gravel, with no traffic, and a great change of scenery.

After connecting to nicely paved Mathews Road we had a fairly short ride to Hoosac (also nicely paved…initially). The climb up Hoosac is a Strava segment called “last pop- D2R2 160k.” It’s 0.6 miles long and consists of about 4 separate pitches averaging out at 6.7% gradient. It looks like a great training climb where you get hard short efforts, and little chance for recovery, and then another hard go repeated a few times till the peak. 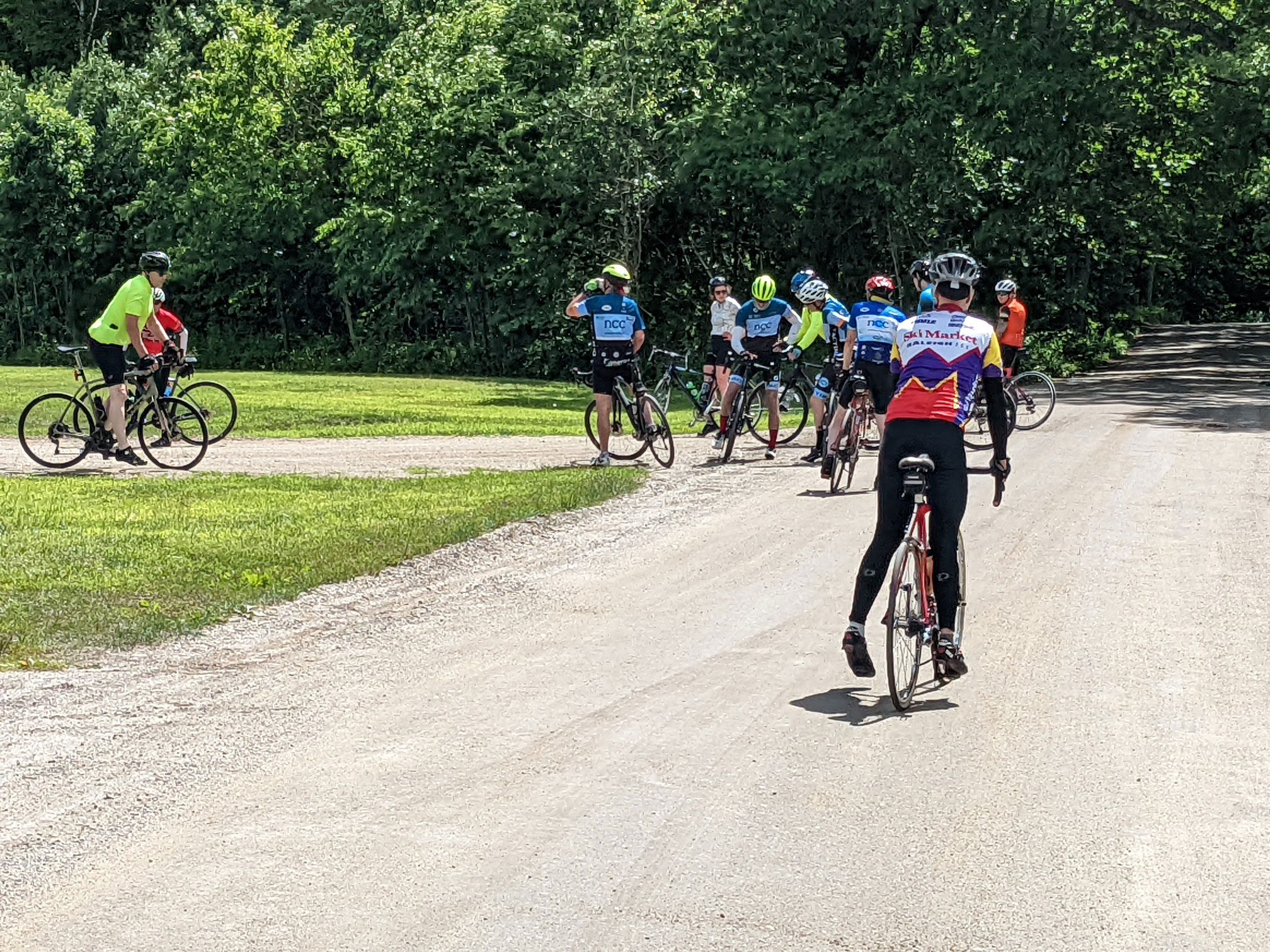 The descent from the peak continues on nice asphalt for a way’s then around a bend, suddenly turns into a narrow single lane dirt road. The sudden change could be a problem if you aren’t aware of it. Fortunately Henry stationed himself to alert those of us behind so we had time to cautiously make the transition. After another mile of dirt we were out on asphalt again and on our way, against the wind, to our most northern point on Upper Road before starting our return.

When we turned onto Lower Road the wind was at our backs, for the first time, and with the descent from Wisdom Way we rejoiced in the feeling of, relatively speaking, flying along the road. Along this stretch and for most of the way back we saw numerous other riders, mostly heading in the other direction. They were likely part of the day’s cancer fundraiser.

We decided to skip the Hillside Road climb that was part of the plan and rode instead through Deerfield downtown to get to the intersection of 116 by Mt. Sugarloaf where three of the group split off for the Amherst area. The remainder of us meandered down to the Sadowski Farm stand on River Road for a last break then made our way back to Northampton in a couple of groups. 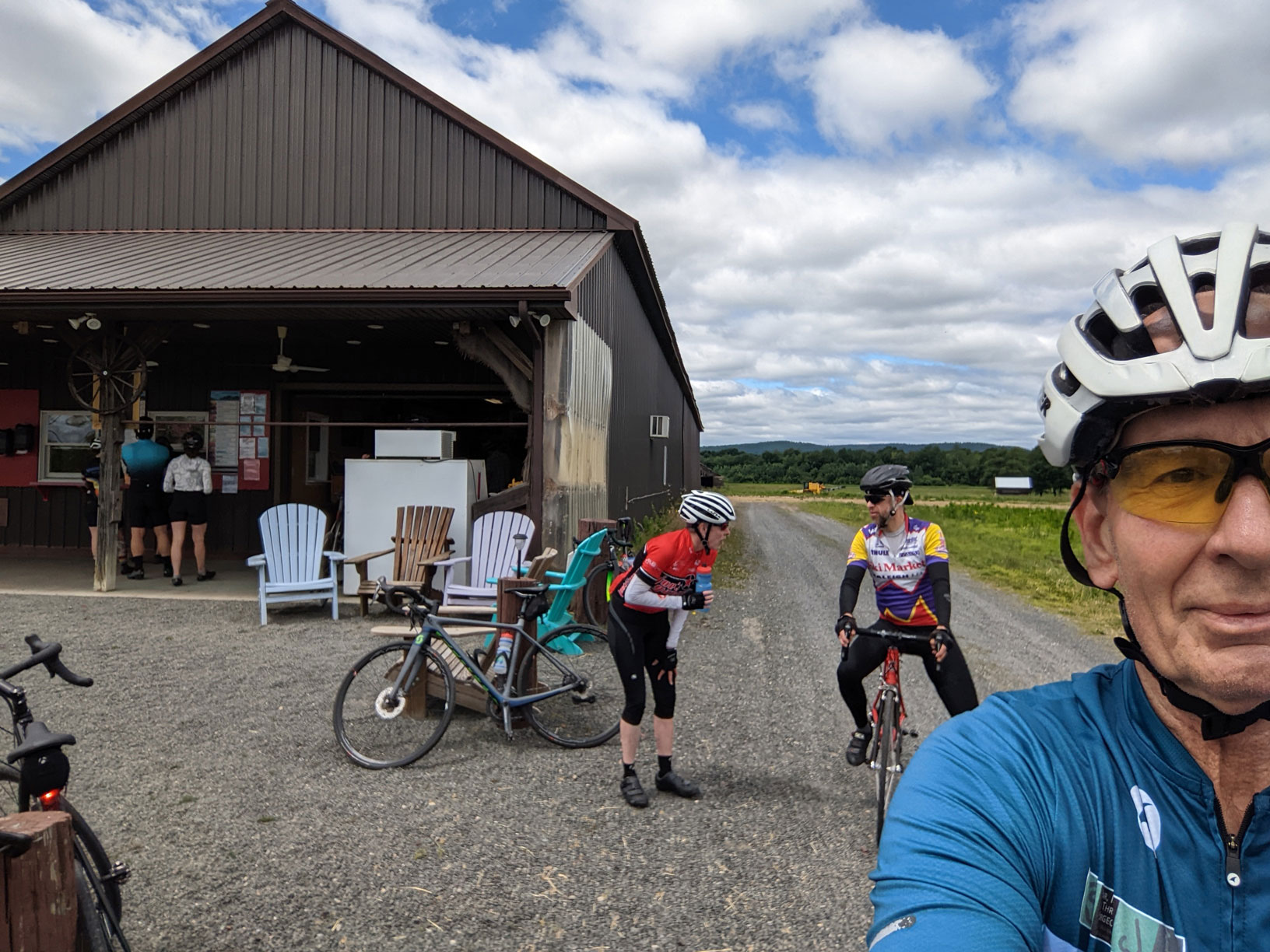 Aside from the wind it was an enjoyable ride with a good group of folks. Special thanks to Rob for bringing his multi-tool so I could tighten my front brake and keep it from rubbing; to Lynda for suggesting the alternate route to Mathews Road; to Henry for helping with the regrouping and preventing any mishaps on the Hoosac descent; and for all the others for their good nature.