Each week when I plan a route for the B’s, I factor in many metrics.  The weather is always one of those, but a goal for me is to try to not repeat routes we have taken recently, including those that may be part of the other weekly rides and races.  Since it is June, I decided to add on the climbs to get to a couple of hidden gems we don’t usually ride to.  As usual, my ride reports tend to be a short novel, so before I get any further, I want to remind everyone that Tour of the Hilltowns is coming up on June 25.  We really could use your help, especially corner marshals.  It is about a half day commitment and you get to see pro racing up close.  Check out the volunteer list and sign up now! Oh, also a really cool task is to drive your car with an USAC official (follow car)- you get to see the whole race!  The sign-up sheet has a contact e-mail if you have questions.

My planned route goal was to check out a step climb out of Cummington – Mount Rd that I had ridden solo last fall, and to continue the pain in Cummington on some more climbs of Trouble St, which we have ridden in the past. I posted the route Friday and my phone texts and email started lighting up.  People wanted to know “how much dirt”, “I don’t want to wreck my bike”, and “I don’t want to walk”.  I guess a combination of my text description on Ride With GPS, and their very wrong estimation of non-paved surface spurred all that.  Somehow I convinced those who had concerns to come along anyway.

At Pulaski, the sun was shining, and it was in the upper 60’s to start. A beautiful clear blue sky day. After a bit of waiting for some tardy riders, we headed out with a dozen.  I knew it would be a great day when Frank declared “this is going to be a hard ride”.  A very nice social pace out of town for 6 miles or so up Rte 66, where we turned down N. Loudville Rd, and……the bar was set for the day with Keith taking the first town line.

With that warmup out of the way, we got right down (or perhaps up?) to business with one of the “walls” – this one being Kings Highway, turning into Reservoir Rd. Nothing new here, just the painful 13% in there.  Nobody seemed to hammer this one, which probably was a good choice so early.  Dusty jokingly suggested we ride the Kings Highway proper, which is much steeper and turns to dirt, but I quickly said “no way”, since there was plenty of that to come. At the end of that, we continued northwest, climbing to Chesterfield center on the quiet shaded roads.  At  this point Ron and Elissa headed home due to time constraints.

After a screaming descent down 143 into W. Chesterfield, we turned right onto Cummington Rd just over the Westfield river.  Usually, sane cyclists continue on down that beautiful paved road which pops out at the Cummington Fairgrounds. But, not on my route, or at not today at least.  Instead, we hung a quick right, to Mt Rd, presented immediately with a plank wooden bridge.  And then a grueling paved climb – where I logged a max of 16.8% grade.  It was here I heard some grumbles that we may as well be walking- but – those folks were way ahead of me and seemed to be doing just fine!  But wait, the pain is not over – this road turns to dirt, and there is a small rocky hump to clear – probably the hardest part of the ride with a road bike.  I had to dismount, but most of the group cleaned it.  After that the road flattens out and is decent dirt this time of year for road bikes.  The reward is spectacular (photo stolen from Jonathan’s Strava).  Endless green farms and quiet countryside. 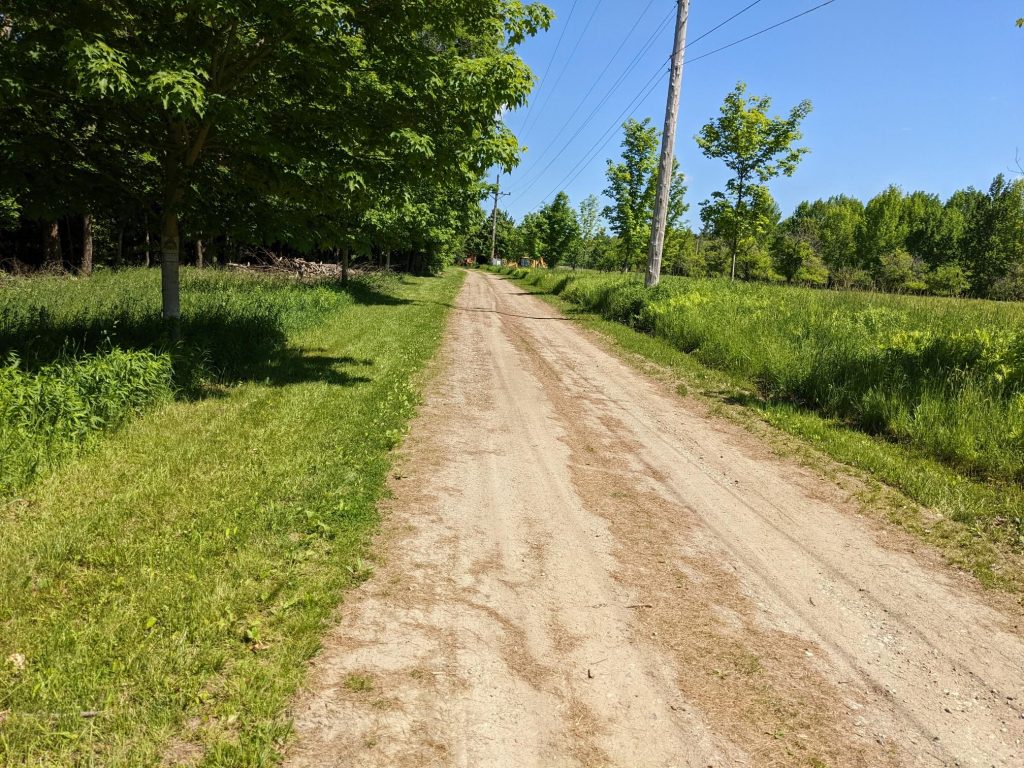 This leads to another fast and fun descent that lands us right by the Cummington Fairgrounds on Fairgrounds Rd.  By the way, this climb we just completed is the finishing stretch to this year’s JAM Fundo– which will be based at the Cummington Fairgrounds.  From there we rolled out to Rte 9 and our first stop to hydrate at the Cummington Creamery.  I was thinking to myself at the bottom of Mt. Rd that nobody had a flat.  I should not have, because, just as we were rolling up to the Creamery, I had a flat.  Luckily the timing was perfect, so while everyone else was devouring scones and frappes, I was repairing my flat, so it all worked out good… except for me unable to enjoy that scone.

Next up- oh yeah, up, Bryant Rd/Rte 112.  Not the best part of the day after resting, the legs on all of us complained, I am pretty sure.  For a while it is nice, paved road, and here was the last bailout opportunity to skip dirt, but nobody skipped.  We all suffered up Trouble St.  It is paved for a while, but turns to decent dirt, with plenty of challenging climbs.  Jonathan first discovered this road back in 2012 and took us there.  James, whom is an astronomer informed us that off of Trouble St, there is an observatory, which offerers one of the few “dark sky” *(no light pollution) vistas in the valley.  Very cool.

Trouble St pops us out on Rte 143, which we followed west toward River Rd… or did we?  Queue up the vocal cords!  There is a hairy descent ( bad road) leading toward the River Rd turn, and I was unable to get to the front, so most of the group missed the turn and continued on to Peru.  I did a little climbing in an attempt to get them in view, but nope, they were hammering.  Luckily Melissa had cell service and was able to call Wendy to tell them to head back.  In the meantime as we waited, it was not such a bad spot to relax. 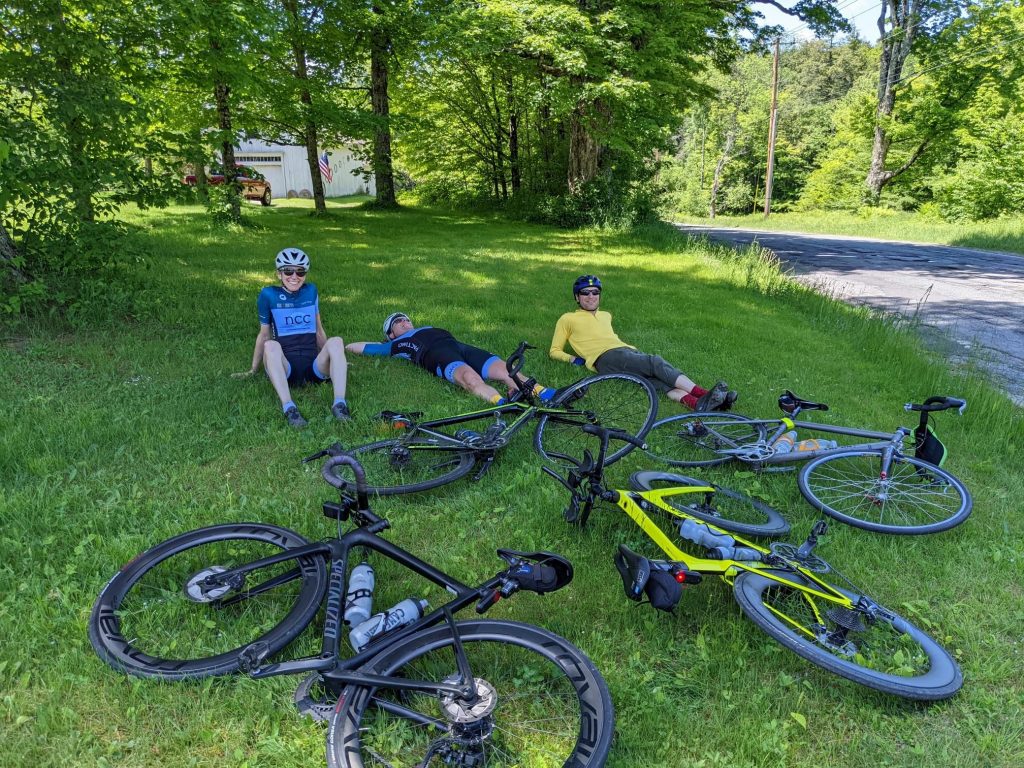 All back together, we enjoyed a long descent with absolutely beautiful vistas.  It was interrupted briefly when Henry had a flat from some sketchy pavement. But the time to pause was also very enjoyable- zero traffic passed us, and Jonathan apparently took the opportunity to get a few selfies in the river.

All the fun had to end again with the climb up E. River to Bromley.  This is one of the climbs on The Great River ride.  It hurt. But, amazingly at the top, I had zero complaints, and actually compliments!  Once again, what goes up, does go back down.  We ended up on the Skyline Trail, which is also a beautiful descent. One more over use of my vocal cords though, a wrong turn again by the folks in the front!  Luckily, we were all close, and made it all together for a quick stop to refuel at the Huntington Country Store.

Unfortunately, there is never an easy way to get home from here. Frank convinced me that County Rd would be better, rather than Rte 66 back to downtown.  County is steeper, but shorter, and more in the shade, so we did it.  I was pretty much cooked by now, having my slowest time ever up that.

Once back on Rte 66 is was a hammer-fest, crazy pace back downtown- led by Keith.  All good fun.