After a two-year hiatus, Massochistah returned on Saturday! Of the 175 participants in this challenging gravel event, over 20 were NCC members.

I arrived at the Ashfield Lake House around 7 AM that morning. As I wheeled my bike from my car to the Lake House, I realized that today was going to be special. There was something tranquil about the lake at that time in the morning. 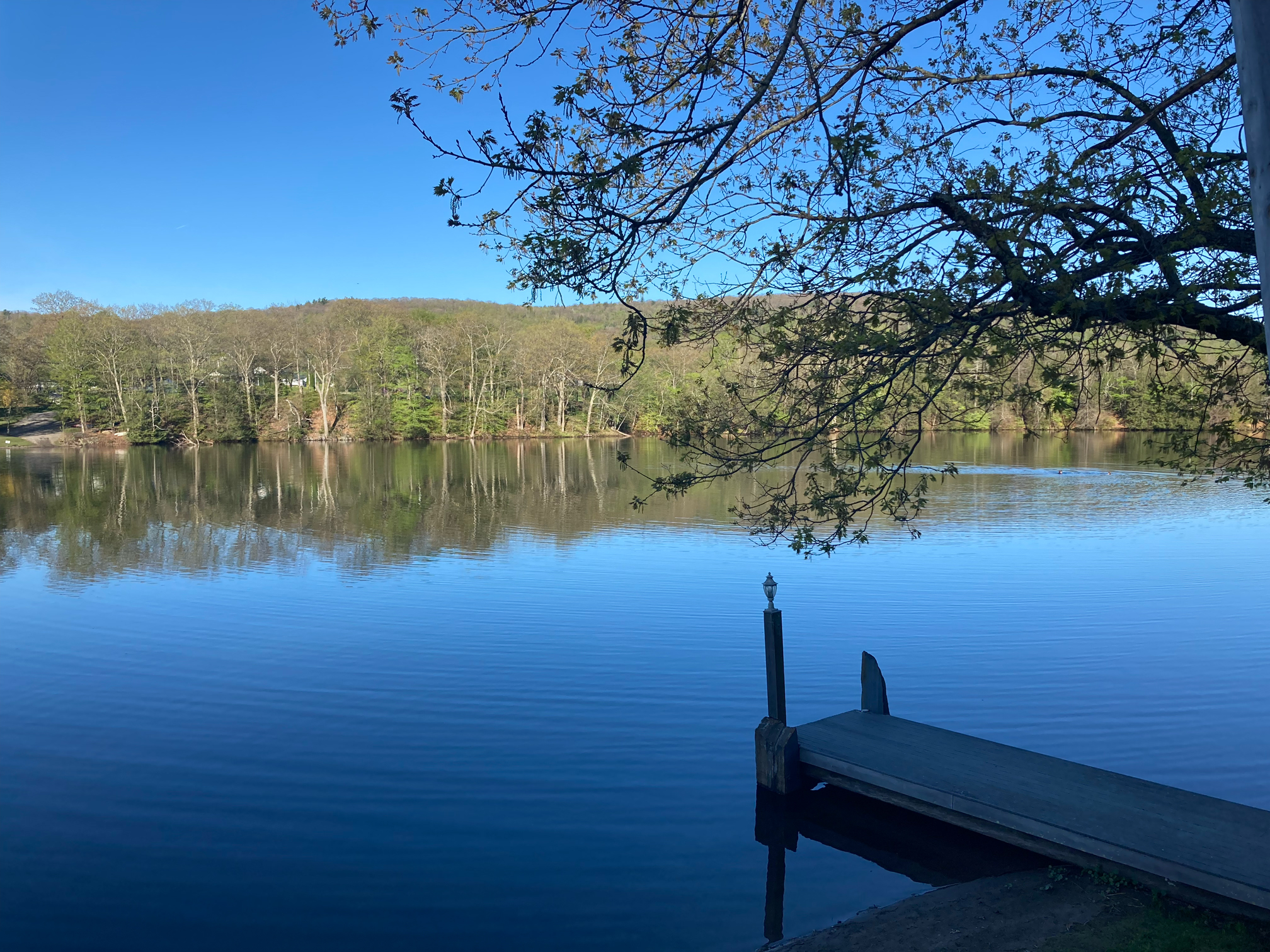 After signing in, I had a croissant and a drink and caught up with other NCC members that were joining the fun of the Hurty (52 miles overall, 23 miles of gravel, 6,200 feet of climbing). Charlie, our former president, even drove in from Syracuse to join the adventure. 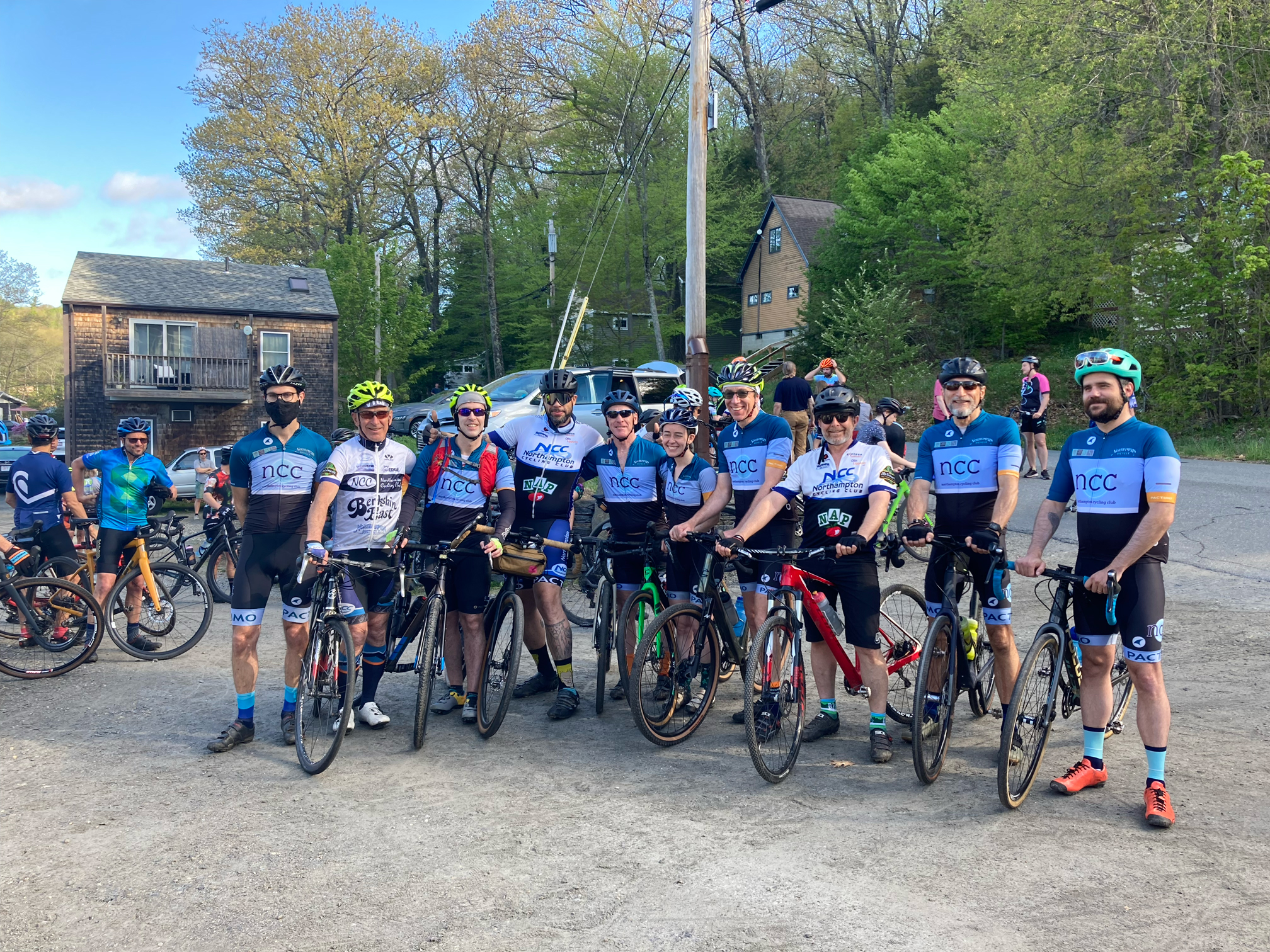 As we lined up to depart at 8 AM, Jonathan and Aimé gave the 62 of us info about hazards and rest stops. An Ashfield police cruiser led us from the Lake House to Emmetts Road. For the Dirty (30 miles overall, 15 miles of gravel, 3,600 feet of climbing) at 9 AM, they would give similar advice to the 48 riders. 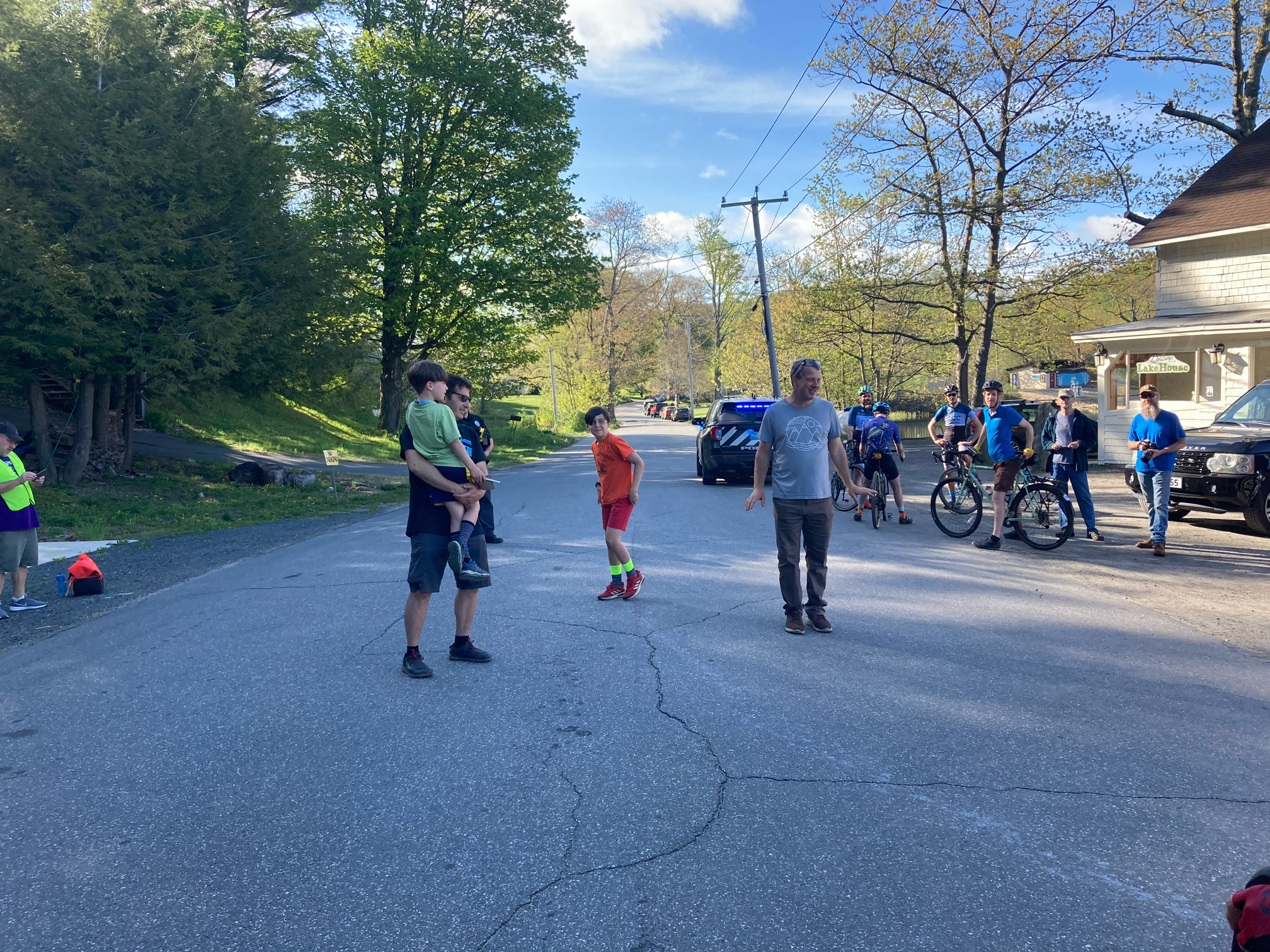 In the crowd of riders on the first hill, my wheel slipped. Fortunately I was able to catch myself, but my momentary pause and the sharp incline did not play nice together. I walked up to a level spot to remount, but the pack was gone.

Initially, I thought it was going to be a long solo effort for the remaining 50 miles. Thank goodness I was wrong about that. I slowly started encountering people. I met riders from all over New England, including a pair that came in from Portland Maine.

Around mile 6, I caught up to Ari. For the next 25 miles, we were a team. At mile 13, we met up to Juan and Dan at the Conway Covered Bridge. 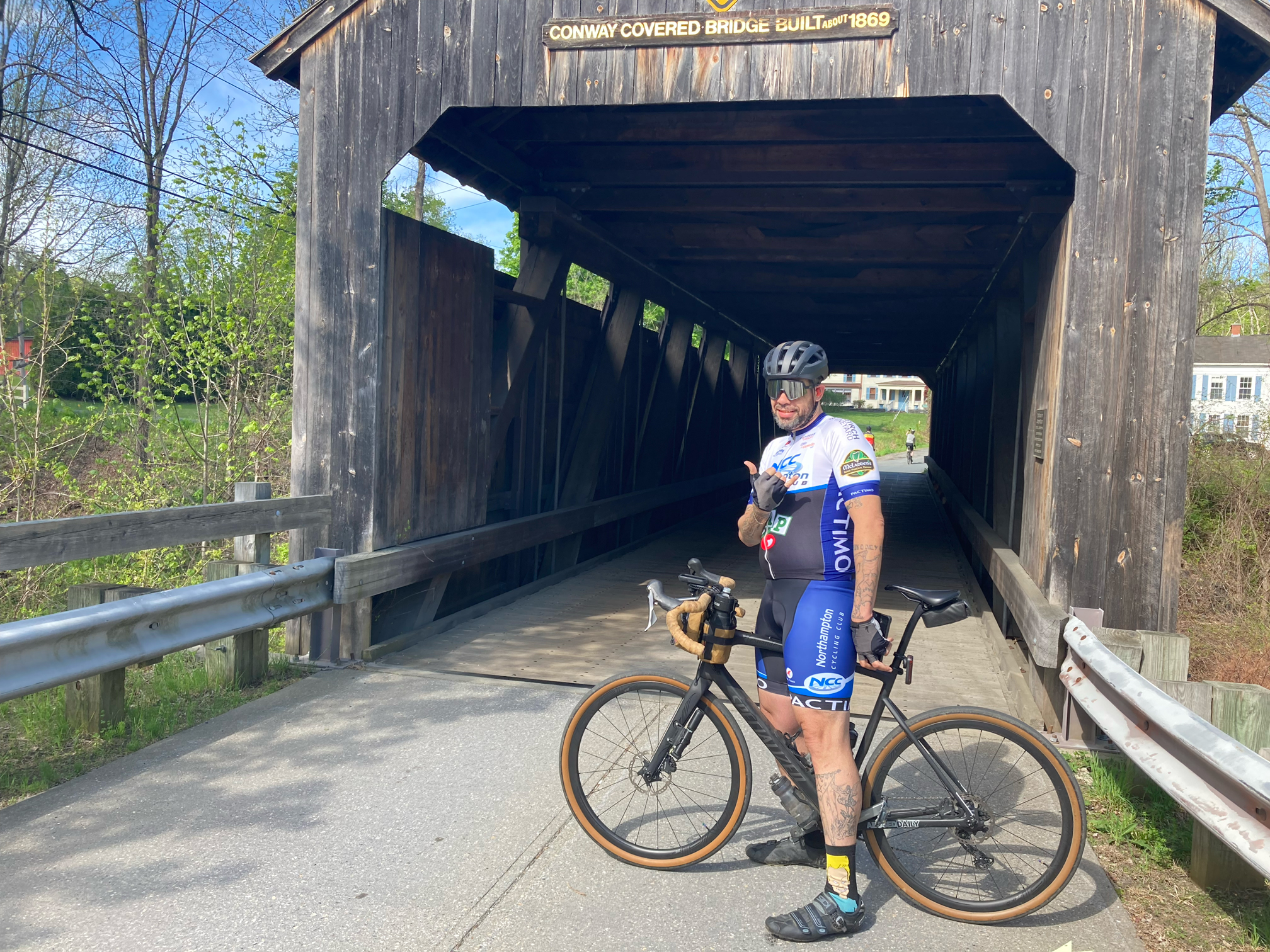 We stopped at the top of the Poland Gate (mile 15). Dan and Juan had enough energy to hold their bikes over their heads to celebrate the ascension of the climb. The group continued on the first rest stop on East Guinea Road (mile 18). Dusty was volunteering at the rest stop and he had a box of donuts for us.

As we kept going, our group got strung out a bit. Dan went ahead, while Ari and I eventually caught up and passed Juan, who was riding on only three hours of sleep. At the 30 mile mark, Dan was standing in front of the pivotal sign, Hurty straight, Dirty right. Dan said he had to be back by noon, so he was going to the right. I thought this was odd, but at the party afterwards I realized he was a member of the band, Beau Sasser’s Funky Velo Trio.

Less then a mile past the turn off sign, Ari and I made it to the second rest stop. It was an unmanned stop, but the water was all we needed. The cows across the street seemed a bit confused by their two lycra wearing visitors. 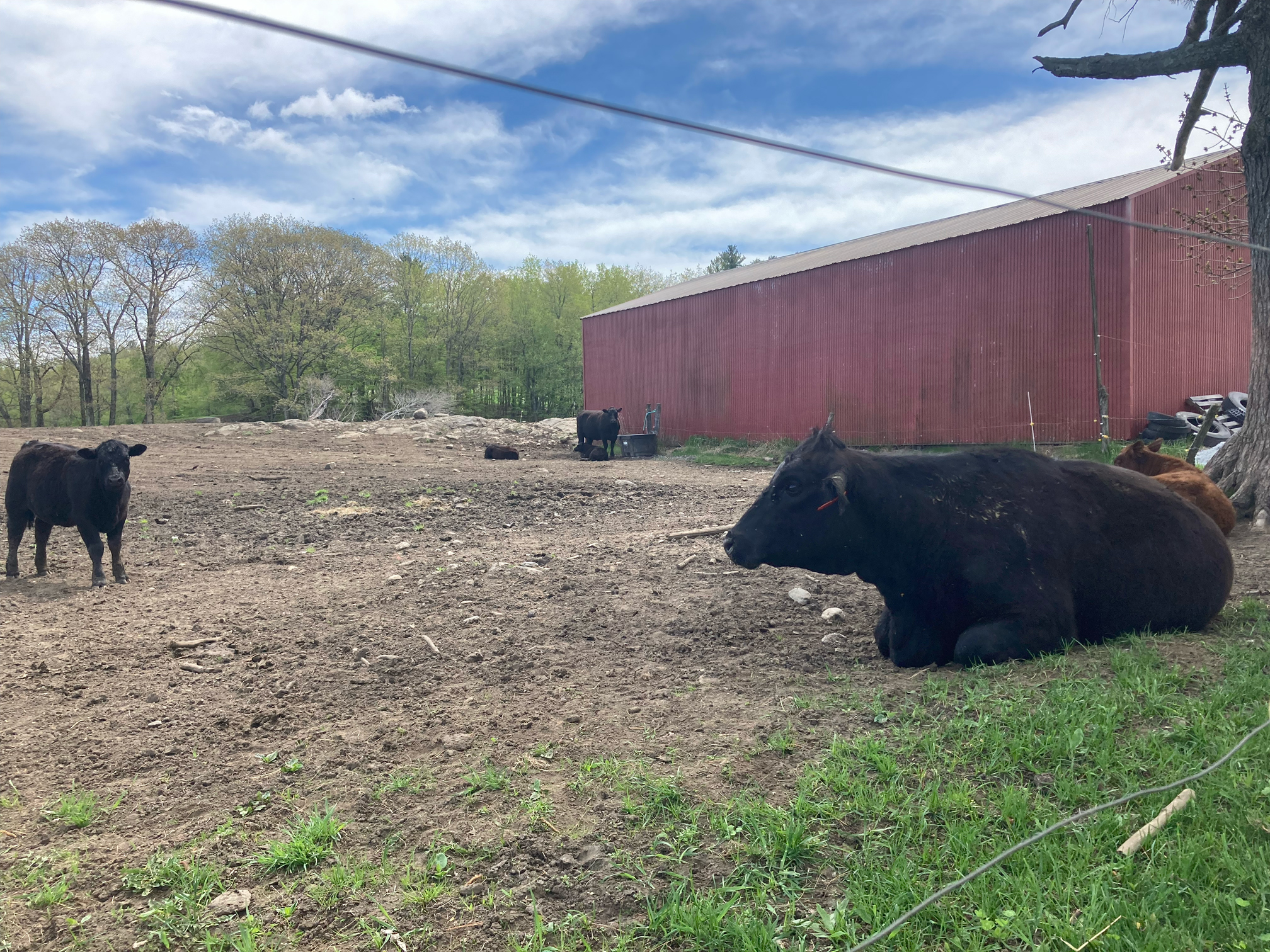 We pushed on, but Ari decided to turn back since he had a JAM Fund ride on Sunday.

As I started navigating Bug Hill road, I again thought I was riding the remaining 20 miles solo. Then I met Carl from Westfield. We struck up a conversation, and we both welcomed the company. 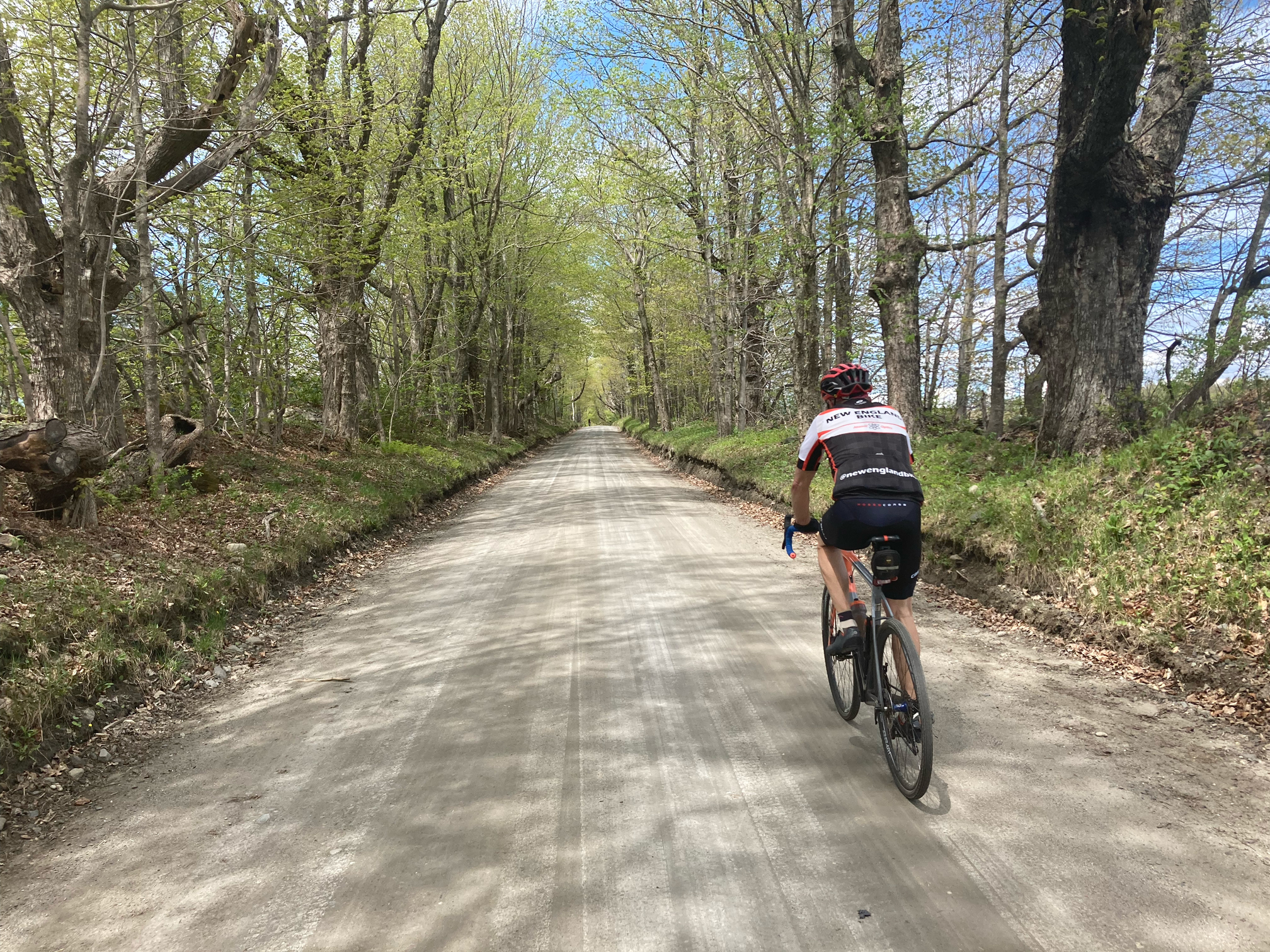 At the rest stop at a farm on Forget Road (mile 38), the popsicle was magnificent. Granted after four hours of riding, a cold treat on a very hot day in May was welcome. I cannot even tell you the flavor of that treat, I was more focused on the welcomed cold of the popsicle. The view from the farm rest stop was spectacular. We briefly saw Jessica at the rest stop. Her husband and children were volunteering. Carl wandered into the barn. At the party I learned that he was planning to return to the farm to pick up one of their specialties. He did not want to ride the final leg of the journey carrying one of the farm’s glass jars.

The final 17 miles were very challenging. The climb up Shepard/Avery almost broke me. I was sweating so much that it was pouring into my eyes. After Avery Road flattened out a bit, we encountered Jessica. We were now a trio the rest of the way. The decent was very fast. Only after we saw the Buckland Library did we realize that we were in Buckland. This may have been my first visit to Buckland. 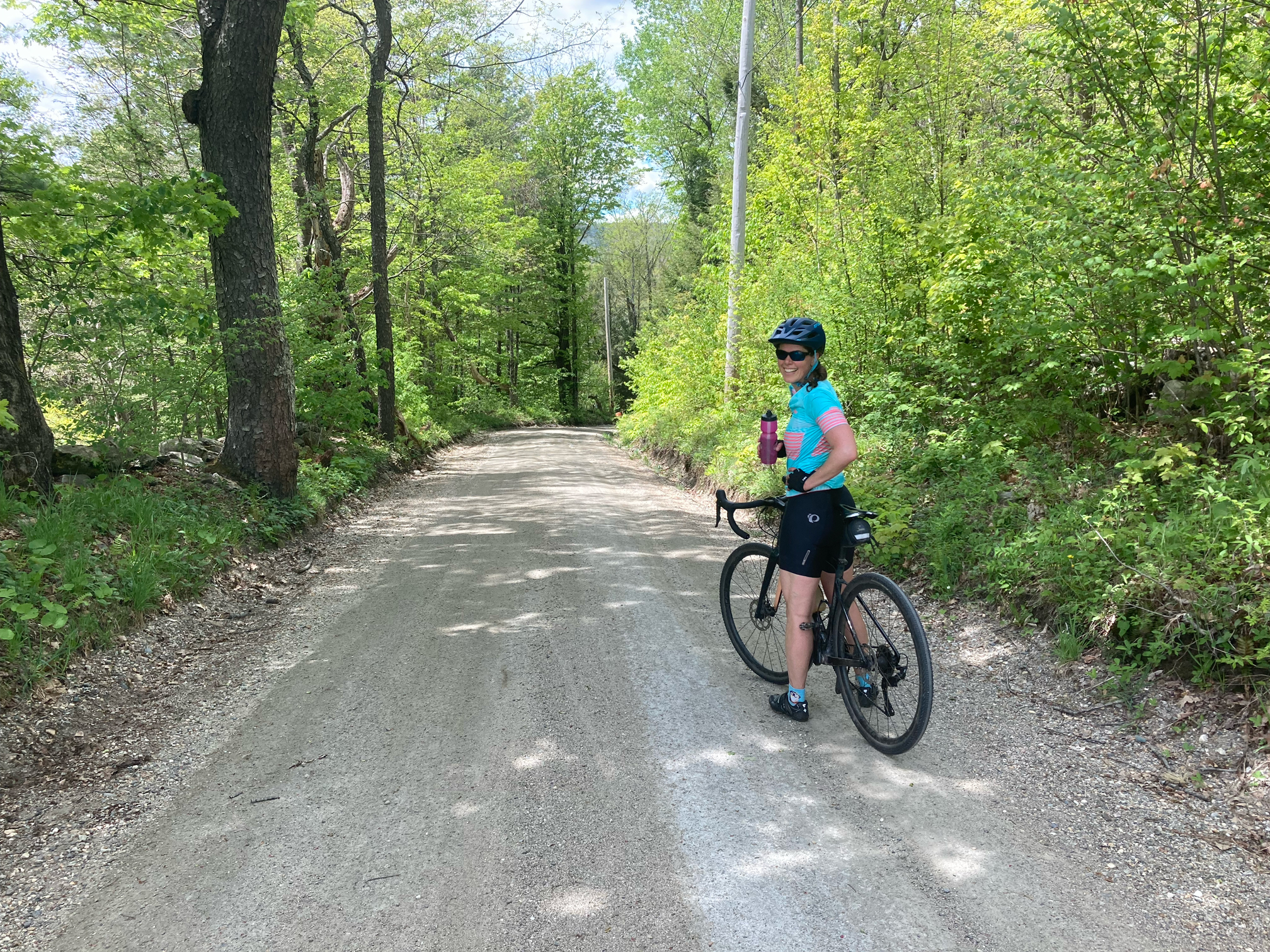 By mile 48, we had climbed over 5,500 feet. My body was not happy with me. The final climb did break me. There was one point where Ride with GPS said it was a 21% gradient! I’m not too proud to admit that I walked at several points during this climb. As we ascended, there were signs with individual letters on the side of the road. I saw multiple signs for the letter A, S, and H. In my delirium, I was confused. I was not the only one, since Jessica and Carl both questioned what the letters were at the top. After the ride, I learned that Massochistah was spelled out letter by letter. This goes to prove how we were all feeling on the final climb.

The final 1.5 miles were enjoyable as the three of us counted down to the finish.

After changing out of my sweaty kit, I had some food, caught up with NCC friends, and listened to the band. Many families of riders joined us at the Ashfield Lake House and took advantage of the hot weather to go in the water. 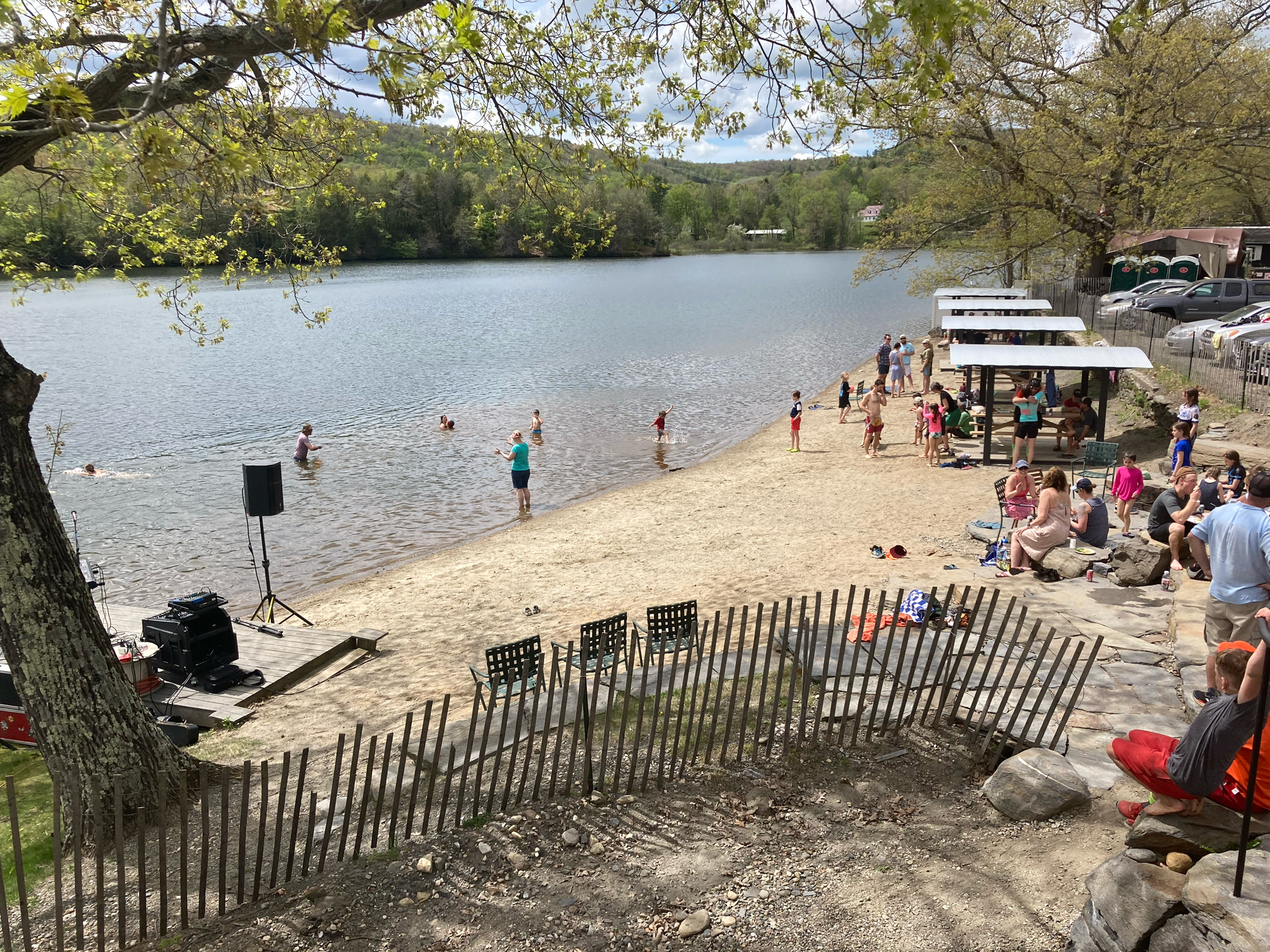 Jonathan, Aimé, Leila, and the rest of the NCC volunteers did a fantastic job putting on this challenging event. Even though many of us had the route on our head units, having signs marking the course was so nice, especially the signs warning us of dangerous descents and blind corners.

Despite the fact that I am not moving at full speed today, I’m already thinking of how to prepare for Massochistah 2023.