Sometimes, we organize rides in the winter… an actually have fun! Here’s a memory from the 2012-2013 winter season.

I’ll admit it at the outset: I like riding the trainer. I’ve only been doing it for a few years, so I’m not yet burned out, and I work my ass off in the basement to try to get stronger for next year. But then Jonathan and Tim are sending me emails all the time saying “Dude, the seventeen-day forecast says it’s going to be like sixty degrees the weekend after next, so we need to schedule a ride.” Peer pressure sucks.

Which is how I ended up in Northampton today at 11AM with Silverscape saying 35°, on roads that were both melting and freezing at the same time. The crowd was thin — the aforementioned instigators, Jonathan B and Tim, along with Kevin, who openly admitted to having been coerced into the ride, and Justin, who appears to be some kind of snow demon, kicking our asses all day whenever the road turned high-speed or technical.

Jonathan had posted this ride as a dirt-road CX-bike route, and picked out an awesome route on some of the best dirt roads available in the area. We went up through Williamsburg on the standard TNR route, but then branched off on Conway Rd, which features a huge initial climb on pavement, followed by a couple more paved ramps, before turning to dirt and climbing a whole bunch more steep slopes. We did this climb a couple years ago in the fall and were able to appreciate the spectacular scenery, but today the fog seemed to increase as we climbed, lending a spooky whitewashed aura to all the landscapes we passed through.

The Conway Rd climb meets up with the TNR route in Conway before the fast descent to the one-lane bridge. We continued on this way, but then went straight onto Main Poland Rd where the TNR normally bears left after the bridge. This leads to a fairly intense dirt climb leading up to Poland Gate, a dramatic notch in the bedrock ridge carved out to allow passage for the road. The descent was a little sketchy, with mud and ice pretty much equally distributed on the road surface, but we all made it through OK, crossing the covered bridge onto Rt 116 in Conway.

Our last dirt segment of the day was Roaring <strike>Bridge</strike>Brook Rd leading south from Conway back toward Whately Rd. This was a new road for me and I was very interested to check it out, but unfortunately the fog was pretty much at its peak here, obscuring almost all visibility, so we forged ahead more-or-less blind, over several fairly significant climbs. We were treated to an extended visit with a gorgeous blue-eyed Husky dog, who played with us, chased snowballs, and followed along with us for a mile or more.

The end of Roaring Brook dropped us back on the TNR route back into NoHo, arriving at around 2:30 PM. I ended up with 39 miles @ 14.1 mph, 3,200 ft of climbing, but the speed is definitely underestmated, because we were very conservative on all the dirt/ice/mud descents (except for Justin, who was carving these with ease).

Peer pressure works! Slightly frozen toes aside, I had an awesome time today. Got a chance to break in my new CX bike, with great company and have a real good test and challenge handling on the snow, mud, and ice (passed with flying colors, I’d say!). Apparently our ride reporter was initially blinded by the fog so much that he didn’t quite catch the correct name of the road of our last dirt segment. I’m quite certain there was no bridge on Roaring Brook Road

Kudos to all of you guys for the epic ride!

Also, I forgot to include the pics in my original post. Here they are. 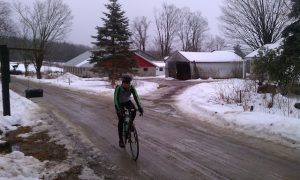 Justin at the top of Conway Rd. 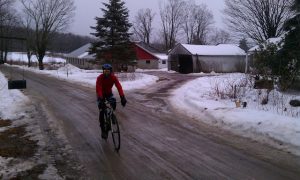 Tim rolling in at Conway Rd 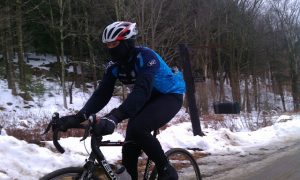 Kevin was incognito all day 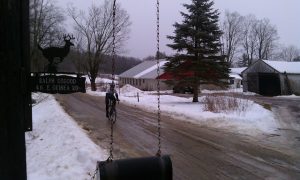 JB forging through the mud 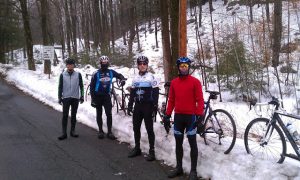 Lined up in Conway 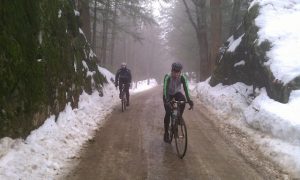 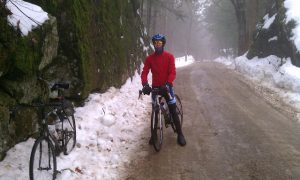 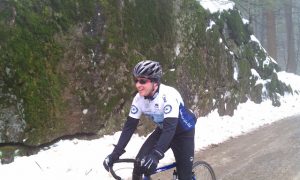 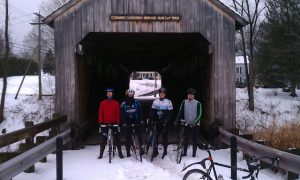 Great to see that you guys discovered Roaring Brook Road, I took a ride down it last month but scratched it off my list for the road bike as being too muddy. It’s better suited for a CX or dirt bike unless dry. I was also met by a friendly husky (probably the same one) who traveled with me for quite a while. I’m now back from frigid Southern Cal. (50-60’s) and looking forward to riding with you guys again though the trainer will likely be the mainstay of my training for the next month or two.