To read more about Henry’s adventures, visit his blog. 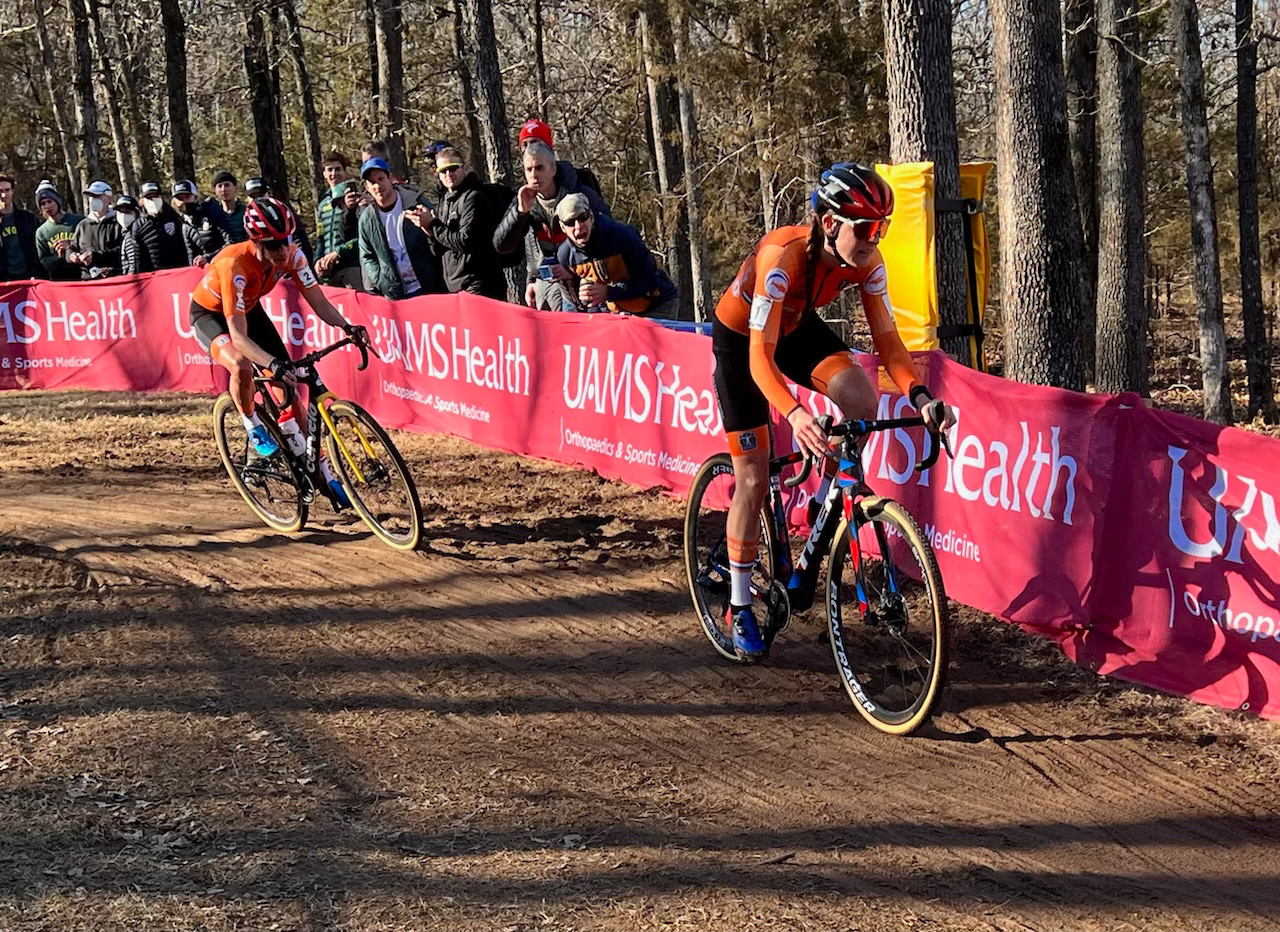 As soon as Mike, my cyclocross team mate, and I heard that CX Worlds was going to be in Fayetteville, Arkansas,  we decided to go. Last weekend (January 28th-30th) it was finally happening. Friday morning early we flew out from Boston to Bentonville with a stopover in Charlotte NC.  We landed in Bentonville at 11am central time. 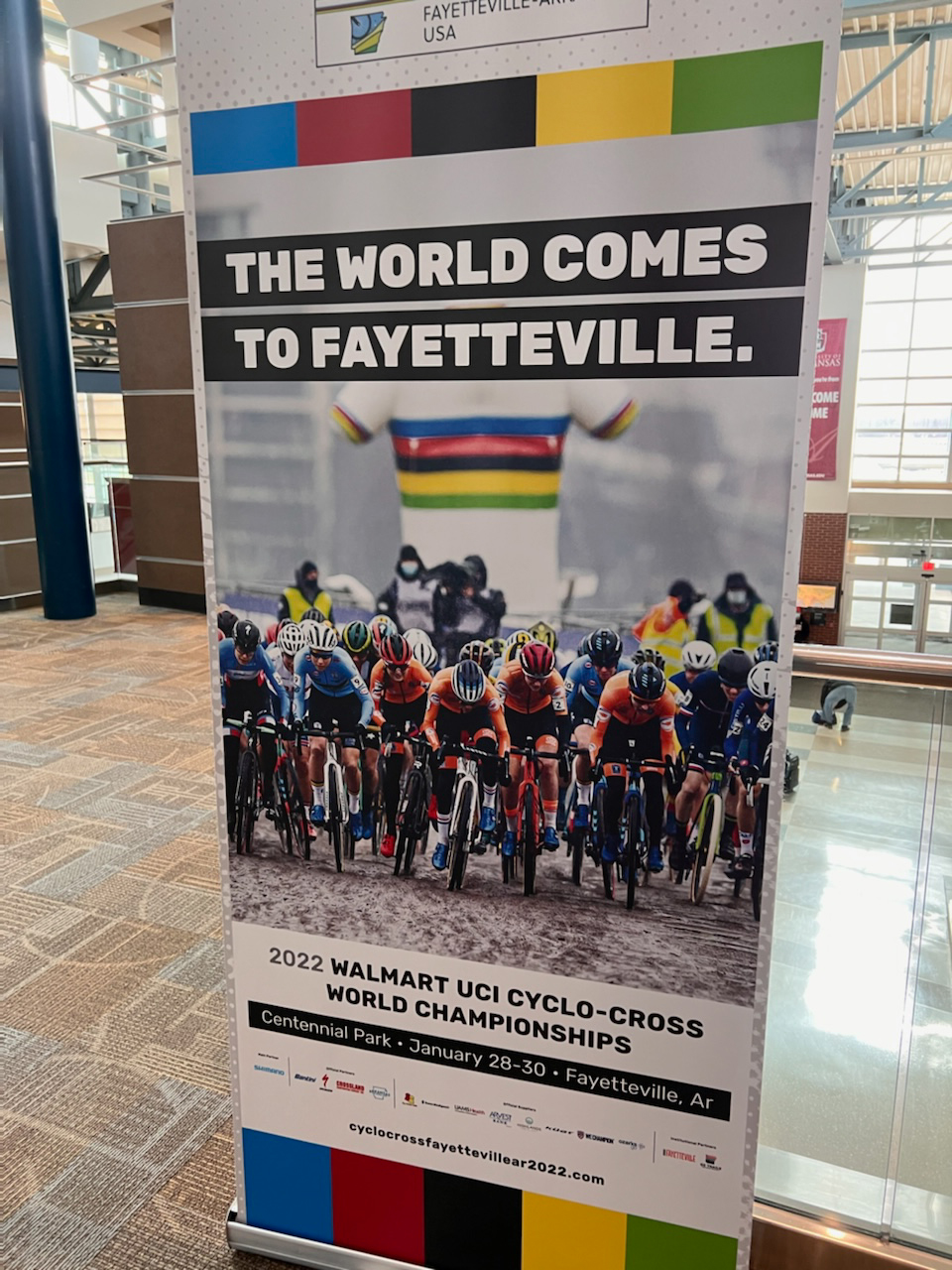 In total there were going to be 10 races over the course of 3 days. Friday kicked off with a team relay race at 12:30. Since we arrived early and the rental car pickup went smoothly, we arrived early enough to see the relay race. We parked our car in one of the 4 designated shuttle parking lots and hopped on a shuttle bus.

We had already bought our weekend visitors pass online ($50) and soon were on the grounds. The course was built in Centennial park on Millsap Mountain. Apparently it cost $6 million to build the course and it showed. The 1.6 mile long course was beautiful. The main feature was a super long run-up followed by a hair-raising descend into a launch hill, which some of the racers used to show off their bike tricks. 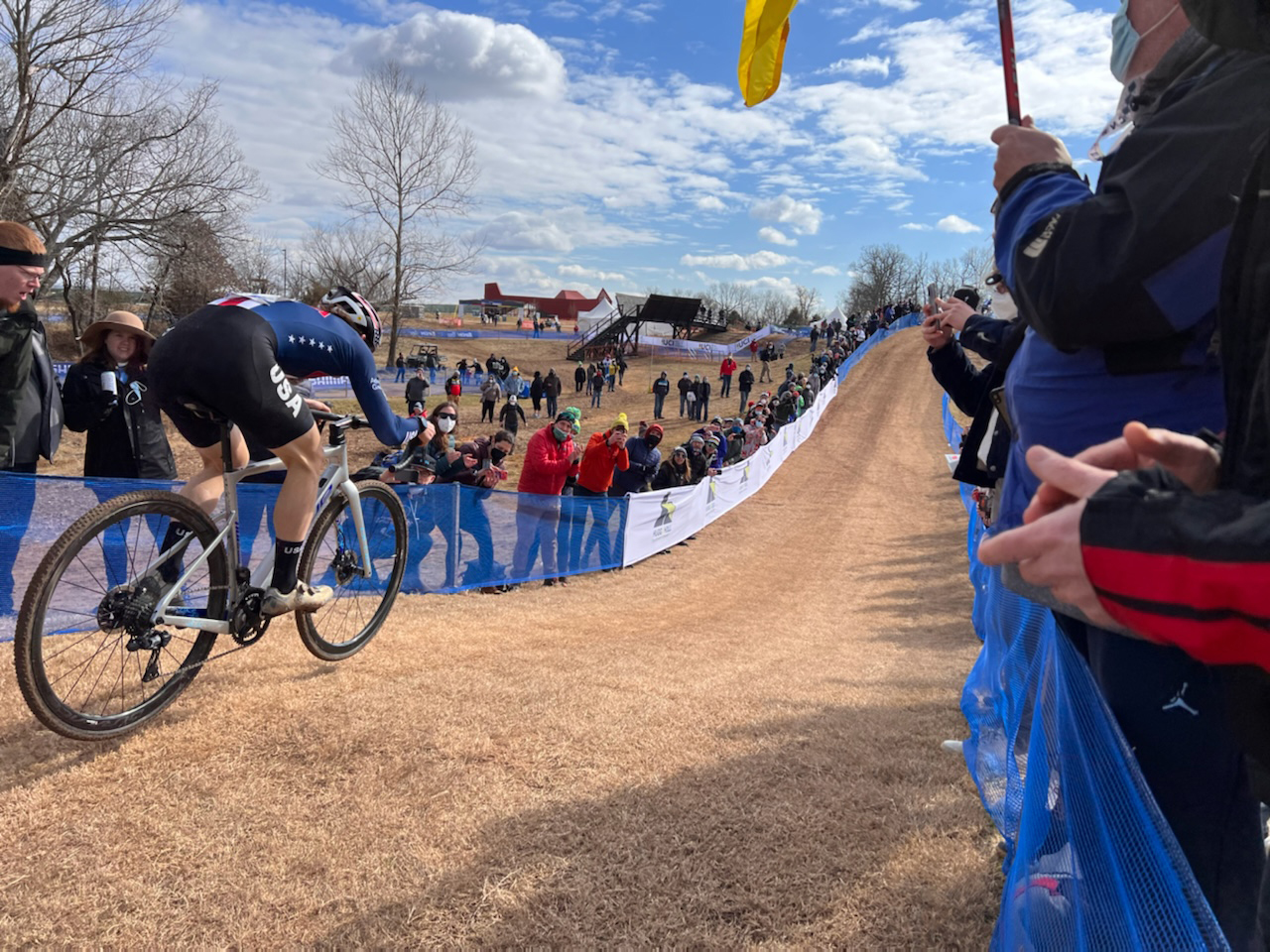 We saw the team relay race partly from the VIP area (I also had a Friday only VIP ticket) so we could see the start up close. There were 6 teams with 2 American teams. Each team consisted of 4 riders, each rider needed to complete a lap and tag the next racer of the team. Clara Honsinger was racing in one of the American teams. They got second after the strong Italian team with rising CX star Silvia Persico. Belgium got 3rd place. 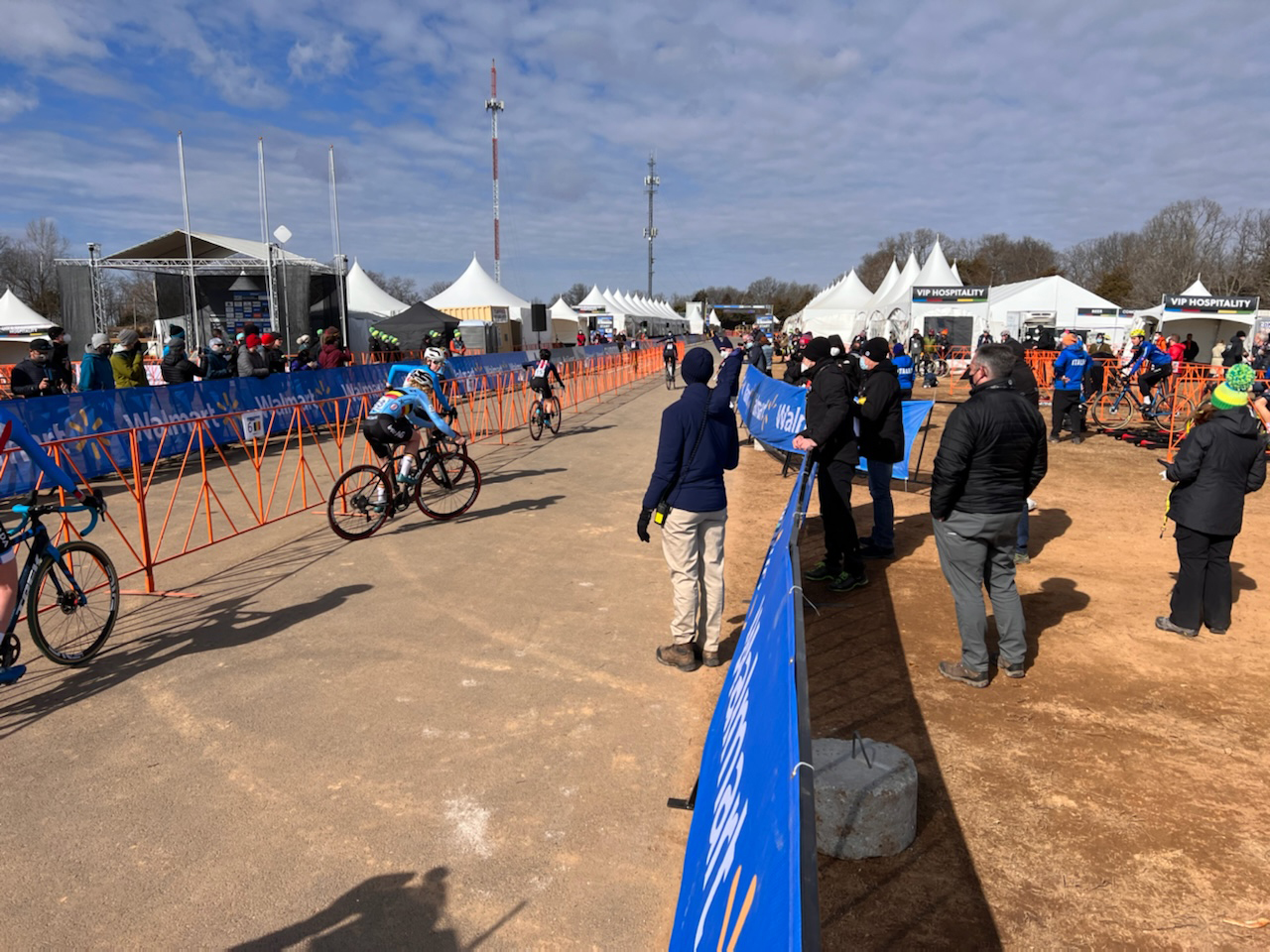 After the race we walked around the course to find some good viewing spots for the next 2 days. While walking around, a number of Elite men and women (including my favorite Dutch male rider Lars van der Haar) were riding course inspection laps. 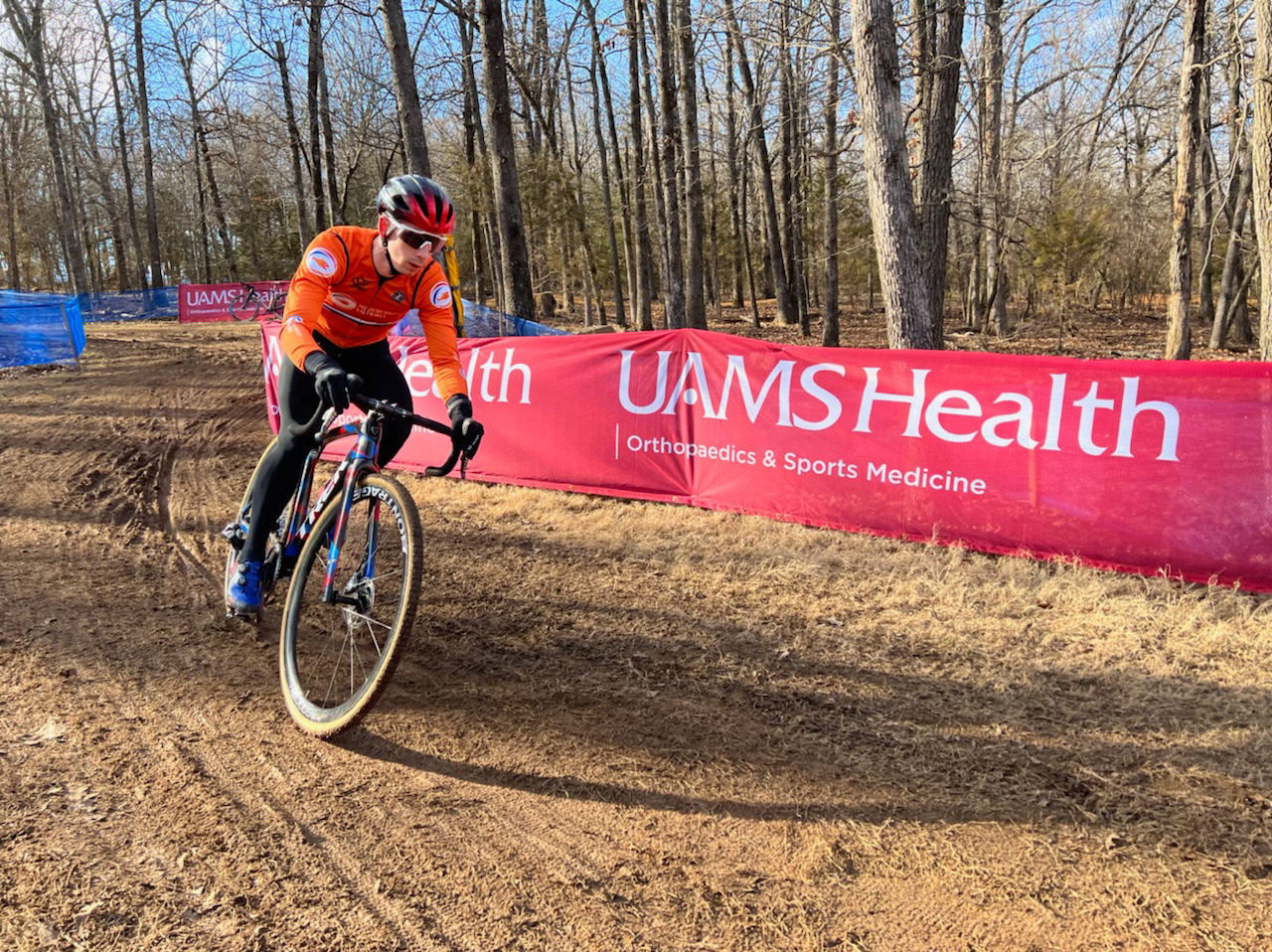 We also saw a number of US riders analyzing the track with recently retired, local legend, NCC board member, now coach Stephen Hyde. He showed them how to take the tricky and then still greasy corners on the fast descend in the woods. 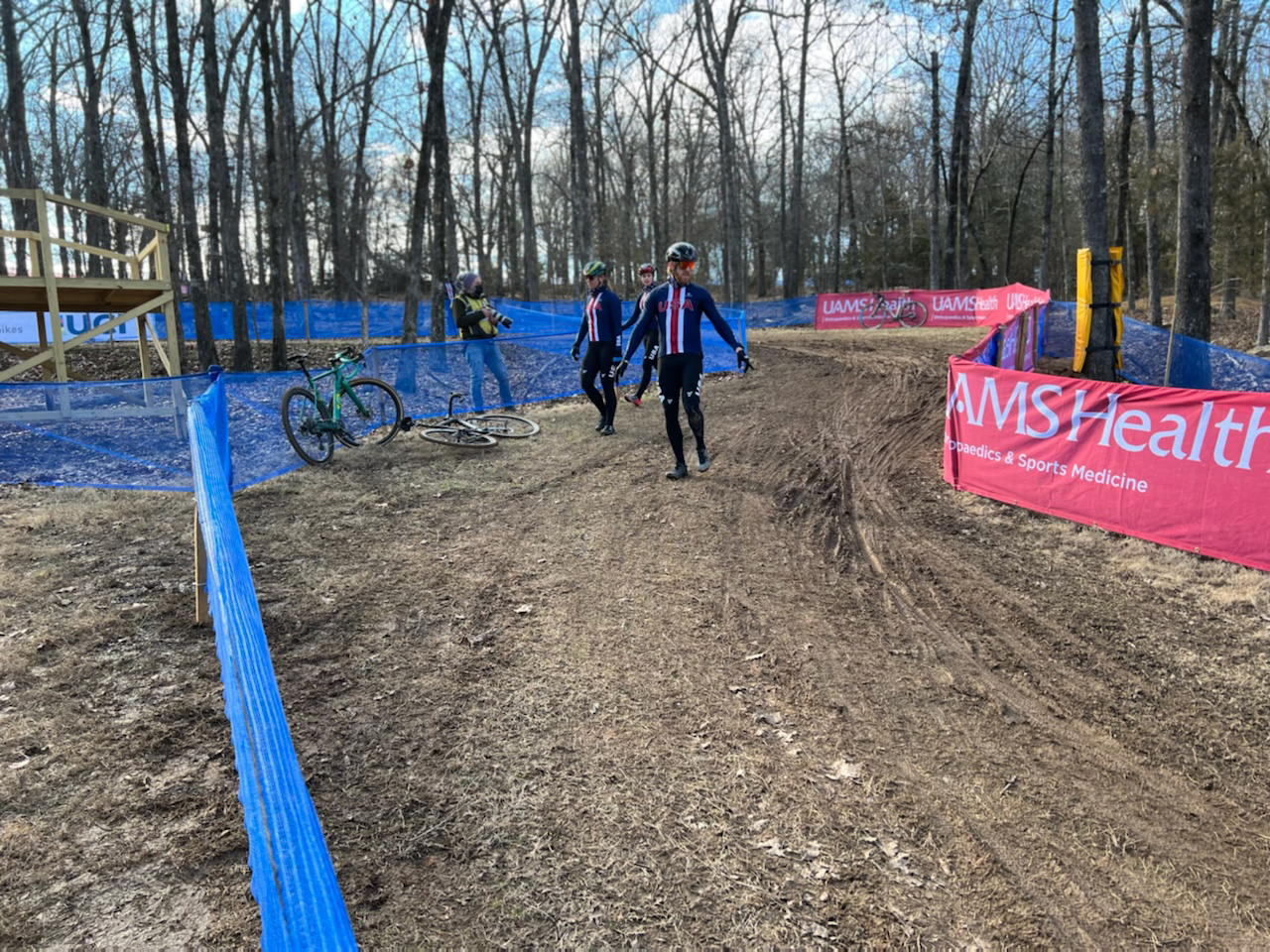 Saturday morning we arrived early to see the junior women race. The day before it had been relatively quiet, but now the crowds started to show up. 6000 spectators were expected, and world wide 30 million TV viewers. We met people from all over the US and Europe. Initially not many New Englanders, but later we ran into a big crew from the New England cyclocross scene.

The English talent Zoe Backstedt won the junior race, sharing the podium with two Dutch athletes. You may have to forgive my orange colored glasses; I moved from the Netherlands to the US in 1998. Best American was Katherine Sarkisov with an 11th place. Later that day I spoke with Alma Johannson, the Swedish national champion junior (9th place). She told me how she loved the course and that her coach had to tell her to stop pre-riding in order not to get too tired.

Before the Elite women, the U23 men raced at 1pm. The podium was an all Belgian affair with winner Joran Wyseure and Sven Nys’ son Thibau in 3rd. Best American finisher was Scott Funston in 17th place. I heard a story that the order for Belgian flags did not arrive in time and at the last minute the organization bought fabric and had a seamstress make 3 Belgian flags. Well, all 3 ended up being used in the ceremony for this race.

While we were waiting for the Elite women race to start, we were treated to an air show by a stunt pilot. The crowd went crazy when the pilot did a low flyover along the finish straight.

Finally it was time for the Elite women’s race at 2:30pm. Mike and I had settled ourselves at the first corner just after the start. We could see the start light jump to green, and then hear the roar of the crowd following the riders to the first corner. I shouted from the top of lungs the names of the first 3 riders (all Dutch) Marianne Vos, Lucinda Brand and Celine del Carmen Alvarado. I may have startled Marianne (oops) as she bumbled and almost crashed just before going into the next corner.

The first few laps the 3 Dutch riders were leading. Half way it was Marianne Vos vs Lucinda Brand in an epic battle with attacks from both sides on “Electric Avenue” a steep 12-14 percent climb. In the end it was Marianne Vos who beat Lucinda Brand in the sprint. Third place was for the Italian Silvia Persico, after Celine del Carmen Alvarado had a crash in the penultimate lap. Best American was Clara Honsinger with an 11th place. Best Canadian was Maghalie Rochette with a 7th place. 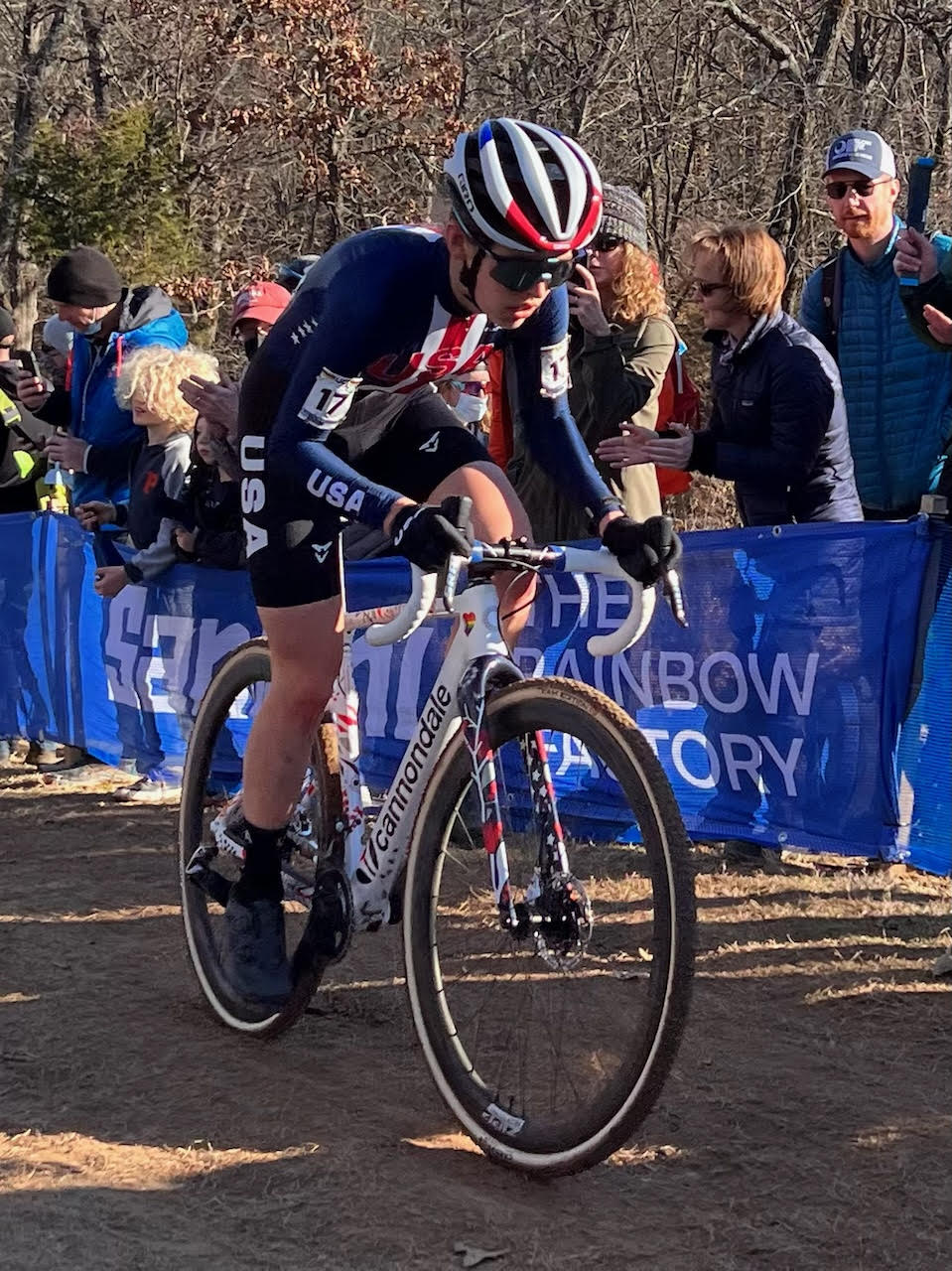 After the race we stayed for the ceremony and listened to the Dutch national anthem. Then the crowd dispersed and we all headed to the shuttle buses. When we saw the lines for the bus, we decided to wait it out a little and perused the various vendors stands. Of course all the big vendor names: Shimano, SRAM but also smaller vendors such as Rapha, Wolftooth, Bikeflights. Even USAC had a stand with free USAC buffs. When at 5pm the shuttle lines were still too long we decided to walk the 2 miles back to our car.

The next day we decided to park the car at a store parking near Centennial Park. It was now only a quick hike up the dedicated bike path to the event.

The first race was the Junior men. Dutch junior David Haverdings was tipped as favorite. He had won almost all of his races this season. Unfortunately he crashed in the 2nd lap. He worked his way forward from an almost last position to finishing in 9th place. The race was won in a tight sprint by Swiss rider Jan Christen, beating Belgian junior Aaron Dockx. Best American finisher was Andrew August in 5th place.

Right after the Junior race at 11:45 we sprinted to the concession stands for lunch and beer. We learned from the day before that the lines for food and drinks were long right after the junior race. Now we only had to wait 5 mins for our order. After we finished our lunch we went to our favorite viewing spot; the first corner after the start. The U23 women were starting at 1pm.

The Arkansas weather had been sunny but breezy the day before. Now it was 60F, sunny and no wind, so was time to take off some layers. 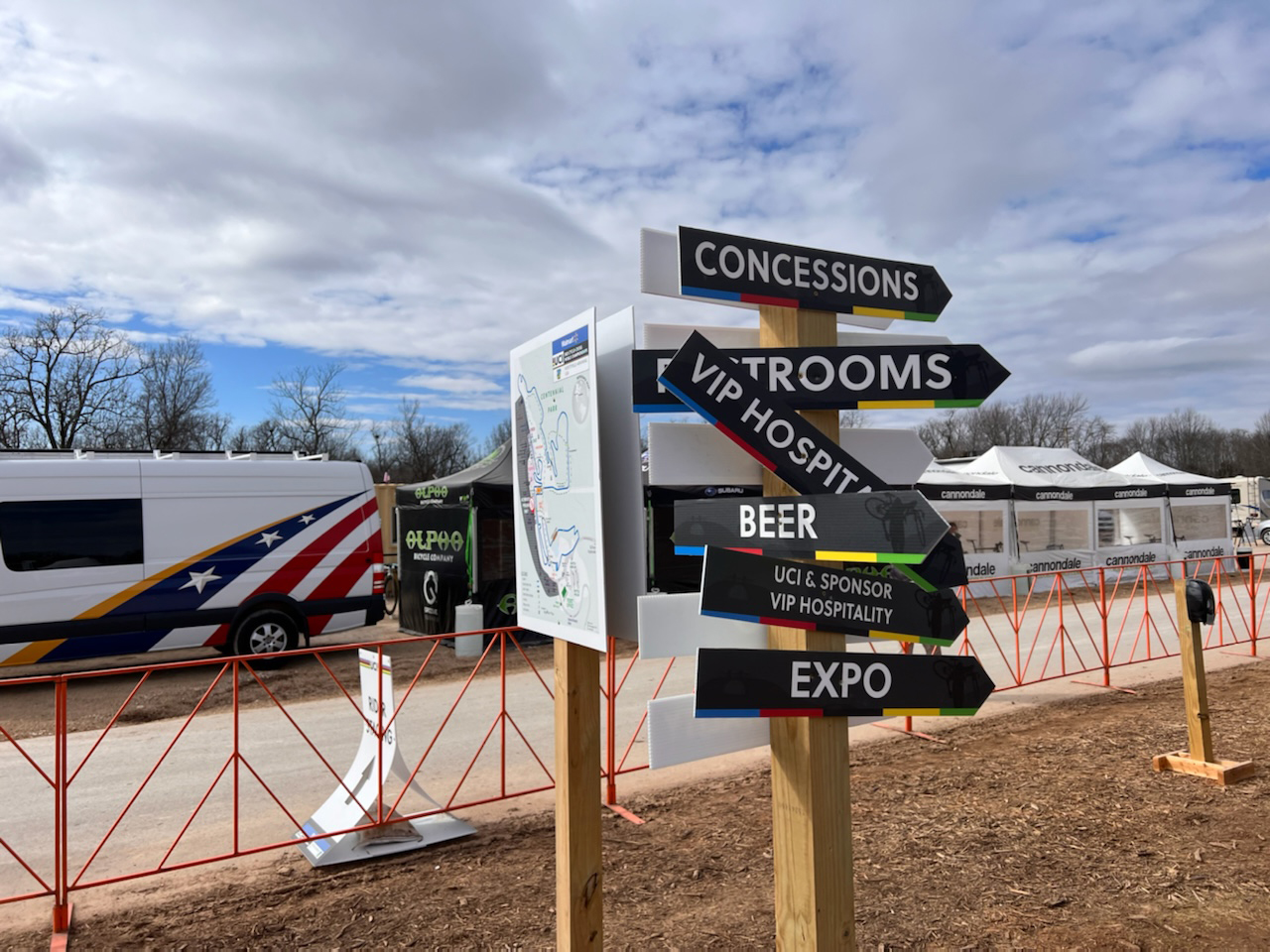 The US was represented by 7 riders in the U23 race The podium was a battle between the Dutch. Puck Pieterse beat Shirin van Anrooy in the sprint, closely followed by Fem van Empel. The best American spot was for Madigan Munro in 8th place. Local favorite Lizzy Gunsalus finished 12th.

After the stunt pilot did his aircrobatics again it was time for the last race; the Elite men. Unfortunately, Mathieu van der Poel (a lingering back injury from the Olympic mountain bike race crash) and Wout van Aert (road racing priorities) were not racing, but almost all the other big names where there. The Belgians: Eli Iserbyt, Toon Aerts, Laurens Sweeck and 5! more. British favorite: Tom Pidcock, and Dutch European Champion: Lars van der Haar. There were 5 US racers including MA resident Curtis White, who won both races in Northampton last fall.

Again positioned at the hole-shot corner we waited for the start stampede. It was an amazing sight and feeling. Thundering Lars van der Haar flew thru the first corner followed by an army of Belgians. After one lap the race turned into a battle between Tom Pidcock and the Belgians, where on every climb one of the Belgians would attack and have Tom Pidcock bridge the gap. Pidcock survived the attacks. Halfway through the race, after a quick punch just before a u-turn on an off-camber section, Pidcock attacked and was gone. Iserbyt did try to get him back but failed. In the 2nd last lap Lars van der Haar attacked and beat Iserbyt in the sprint for 2nd place. Pidcock made a real show of his last lap.  After the steep descend he launched himself in the air for a tail whip and he came across the finish in a superman pose. Best American finisher was Curtis White in 12th place, who seemed happy with his result.

The next day we flew back to Boston.  While getting lunch at the Bentonville airport, the whole Belgian Elite men pack was having lunch 2 booths over. I would have loved to have overheared their Flemish conversations. I did not hear anything, but I can say I did not see a lot of smiles. We did have a chance to congratulate Eli Iserbyt with his spot on the podium.

I hope at some point the US National championships will be held at that course in Fayetteville. I would definitely want to come out and race it, as it sure looked like a lot of fun.