We’ve been reviving a bunch of old ride reports! Check this one out from back in 2013 when we climbed the “other Gulf Rd” for the first time – let the motivation begin!

I’ve gotta say, I was a little bit worried to find out whether anyone would show up at 7:30 AM for our first Super Saturday Morning Ride of the year. Roberto and Rich and I rode over from Amherst at 6:55 AM, and thought we saw a little bit of frost on the ground en-route, with temperatures in the low 40’s in the early morning hours. We arrived at the Academy to find Kevin shivering in the one small patch of sunlight in Pulaski Park. My fears were laid to rest, as we were soon joined by Tim, Clayton, Frank, Mike Y, and Mark W.

This intrepid group of nine set out on a course that Tim had designed and scouted out over the past couple weeks. The aim of these first-Saturday-of-the-month Super-SMRs is to extend our range a little bit and get us out to some areas that we can’t usually cover on our regular SMRs. The target this week was to the northeast, hitting some new climbs north of Rt. 2 in Gill and Erving.

To get us there, Tim took us over North Farms Rd and across the Stillwater Bridge, using Lower Rd to get up to Greenfield. We climbed a bit past Poet’s Seat, and then took the lovely canal-side bike path into Turners Falls, where we stopped to refuel. The bridge over the Connecticut River in Turners is under construction, with a one-way southbound traffic lane and an abysmal narrow debris-strewn pedestrian/bike lane. We made it across without incident, navigated the stealth traffic light across Rt. 2, and began a series of rolling climbs towards the center of Gill, which honestly I didn’t even notice as we passed through it. The scenery was great in this section, though, including an alpaca farm with some seriously-shaggy inhabitants.

After crossing the river again and passing into Northfield, we began the day’s biggest climb, up Gulf Road into Erving. This has about 1,000 feet of elevation gain in around 2.5 miles, and feels like it just grinds on and on forever. Pretty much everyone who pulled in at the top was hurting a lot. The payoff was a long descent down to Rt. 2, with a brief westward stretch on Rt. 2 taking us to Farley Road climbing into Wendell. This long climb spread the group a lot, but we regrouped and refuelled at the country store in Wendell, and then descended to Lake Wyola, climbed up into Shutesbury, descended the S-Curves, and rolled through North Amherst and Hadley towards the finish.

Pics are below the map. 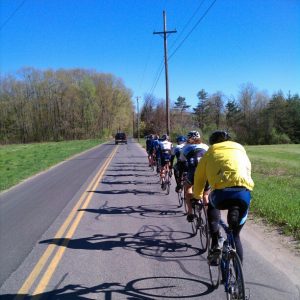 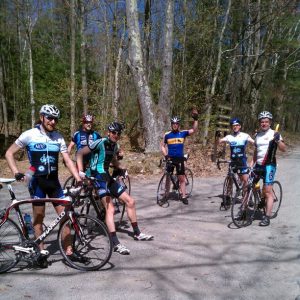 Thanks Jonathan for the report and the nice pictures.
Thiswas a perfect day for riding and it was great to explore some new areas in the north and scenic landscapes including the Turners Fall canal and a MUST SEE bakery.
The route was perfectly choreographed by Tim – thank you.

I enjoyed it a lot and it was worth getting up early.
We got home at a reasonable time to get some nap-time in.

My legs felt a little bit like doric columns today.

What nap Frank? You are a very lucky man to have time for that. I was considered “got home early” and put to work with the “spare time”!

I enjoyed the ride as well as scouting it out beforehand. I am glad that everyone enjoyed it. Great efforts by everyone on a very difficult route.

Here’s the original plot of the route without Jonathan’s (epic!) extra miles)