Our final hillclimb of the season featured a special guest appearance by local cyclocross legend Anthony Clark, riding a fixed-gear mountain bike (geared at 42-16, I think). Perhaps not the optimal whip for the steepest climb in our Tuesday series, but Anthony has always been a bit of a free spirit, and who am I to question his equipment choice? He silenced the sceptics with an out-of-the-saddle sprint from the start line, grabbed the holeshot around the first bend, and I never saw him again. Ben and Zinj looked like they stayed close for a minute or two, but then they were gone too, and I was riding solo the rest of the way, feeling some pressure from behind near the top from Melissa.

Anthony ended up taking the win ahead of Ben and Zinj. As the rest of us straggled in, Henry joined us at the top after his third ascent of the day (he did his timed ride earlier). Roger and Donna also rode earlier, for a total of ten riders on today’s climb. We descended in the gathering darkness, dodging a ton of hikers, and smelling the smoking rubber from Anthony’s rear tire all the way down. Fun times!

With the hillclimb portion of this season complete, the final results are official, and the hillclimb season championships go to Ben in the men’s division and Melissa in the women’s. Next week we wrap up our Tuesday night season with the Short TIme Trial in Whately/Hatfield, hope to see you out there! 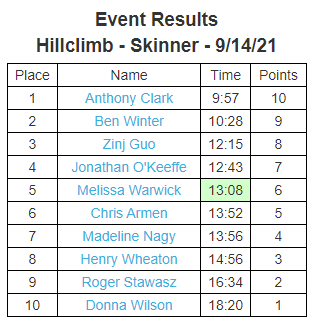