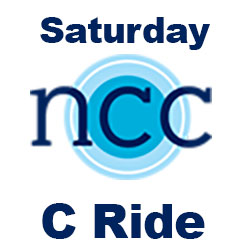 Shortly after volunteering to lead the last Saturday morning C group ride I received an invitation to a Zoom event with west coast friends that was scheduled to start at noon our time that same day. I didn’t want to miss that event and I didn’t want to back out of leading the ride because we’ve not always been able to find replacements, especially on short notice. Also, I didn’t feel that I would be able to come up with a decent season ending ride in the short window that a 9am start would allow, so opted to schedule the ride for 8am.

Fortunately the weather conditions were excellent for an 8am start but even at that as I rode down to Pulaski Park I wondered whether anyone would show up. I wasn’t disappointed though as soon one showed up (Noah), then a second (John), and finally a third (Tom). We waited for a couple of minutes longer then headed out.

I felt inspired by last week’s C ride to Worthington with its nearly 4,000’ of climbing. I also wanted to make the ride a little more appealing to people who might not want to climb so much, but still wanted to make it a somewhat hard effort while keeping it in a window that would get me back by noon. What to do?

One of my favorite rides goes down to Westfield where you ride through the Wyben section along Montgomery Road and then over to Pochassic Road, close to the north shore of the Westfield River then back through the valley between the Holyoke Range and the hills which run along to our west. To get the elevation I wanted meant something had to be added though. 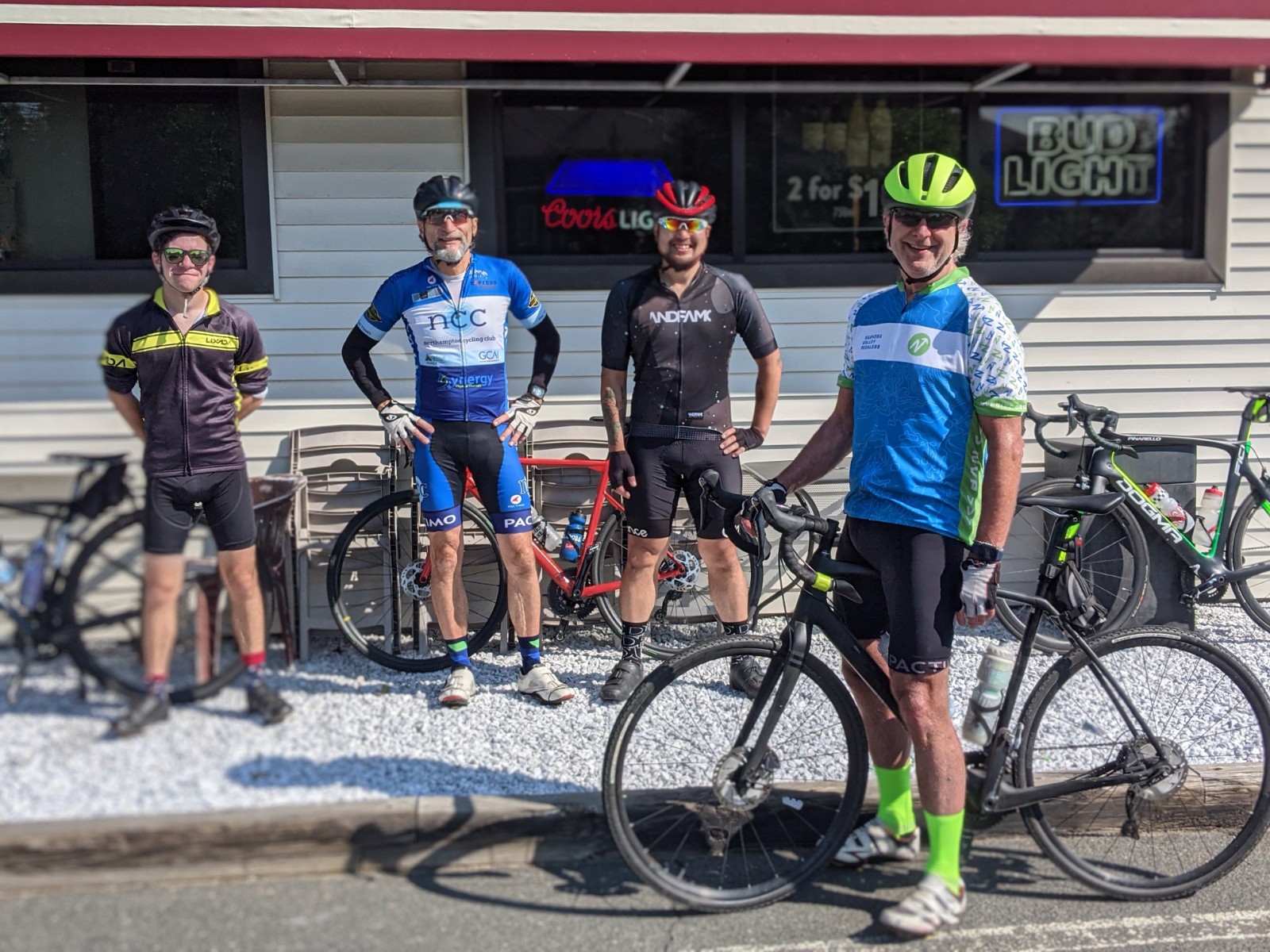 That something turned out to be the climb up Chesterfield Road to NW Road. The plan was set.

As the four of rode along Spring Street, approaching Chesterfield Rd, we saw another rider (another John) up ahead, waiting for us. We now had five. The climb up the Chesterfield wall is never easy, and today was no exception. At the one hour mark we had only covered about 13 miles but the tempo had already changed. Upon reaching the high point on Reservoir Road we sped down the descent and we were gathered by the Outlook Farm at the first time-check. More descending followed down Cold Spring Road to the flats of Pomeroy Meadow. On Fomer / Russellville Road the grade is slight but carries on for a while before another descent, climb, and descent onto Montgomery Road.

At the 29-mile mark we stopped at a convenience store for a break and photo op, this marked our turn back point. The next stop I had planned was for Bashista Orchards in Southampton, I used the break time to peak everyone’s curiosity for the place with a trivia question. 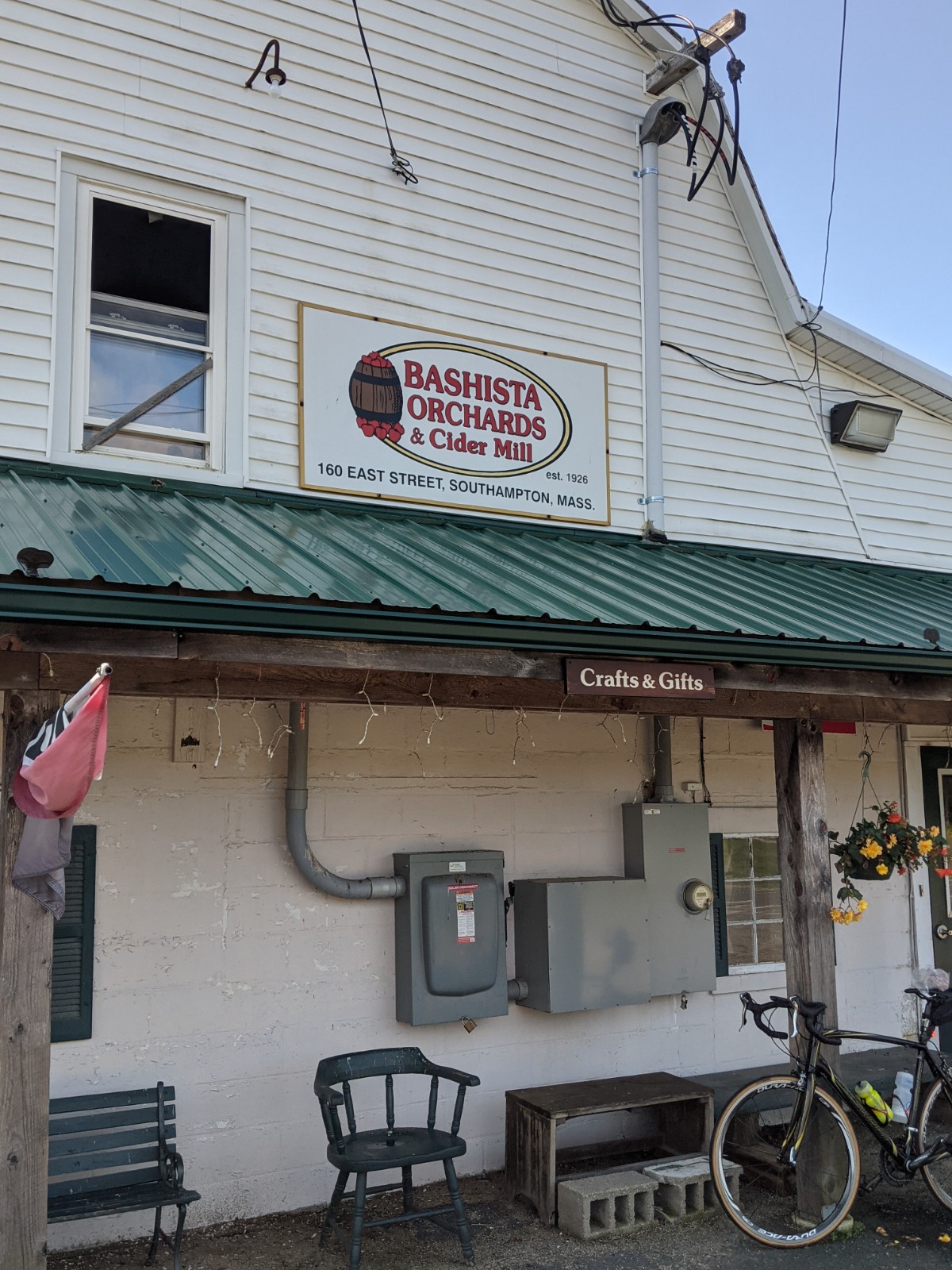 Question: What national news worthy event happened at Bashista Orchards in 1964? No one knew, and that wasn’t surprising as at least two of the people in the group wouldn’t be born until years later. I told them what happened, do you know?

Meandering through the valley we reached Bashista’s at the 39-mile mark. The sky was clear, the sun was getting high, and it was just a beautiful day. One of our crew noticed that Bashista’s had apple-cider donuts for sale; he bought a bag of six, and handed out one to each of us. After nearly 40 miles of riding that donut was a tasty bit of nourishment (sugar) and much appreciated.

Fueled by an apple-cider donut, and realizing that we were pushing my time target we took to the last, and relatively uneventful, leg of the ride back to Northampton where we all split up and went our own ways. I managed to get back with about 10 minutes to spare. Thanks to everyone for a great ride. 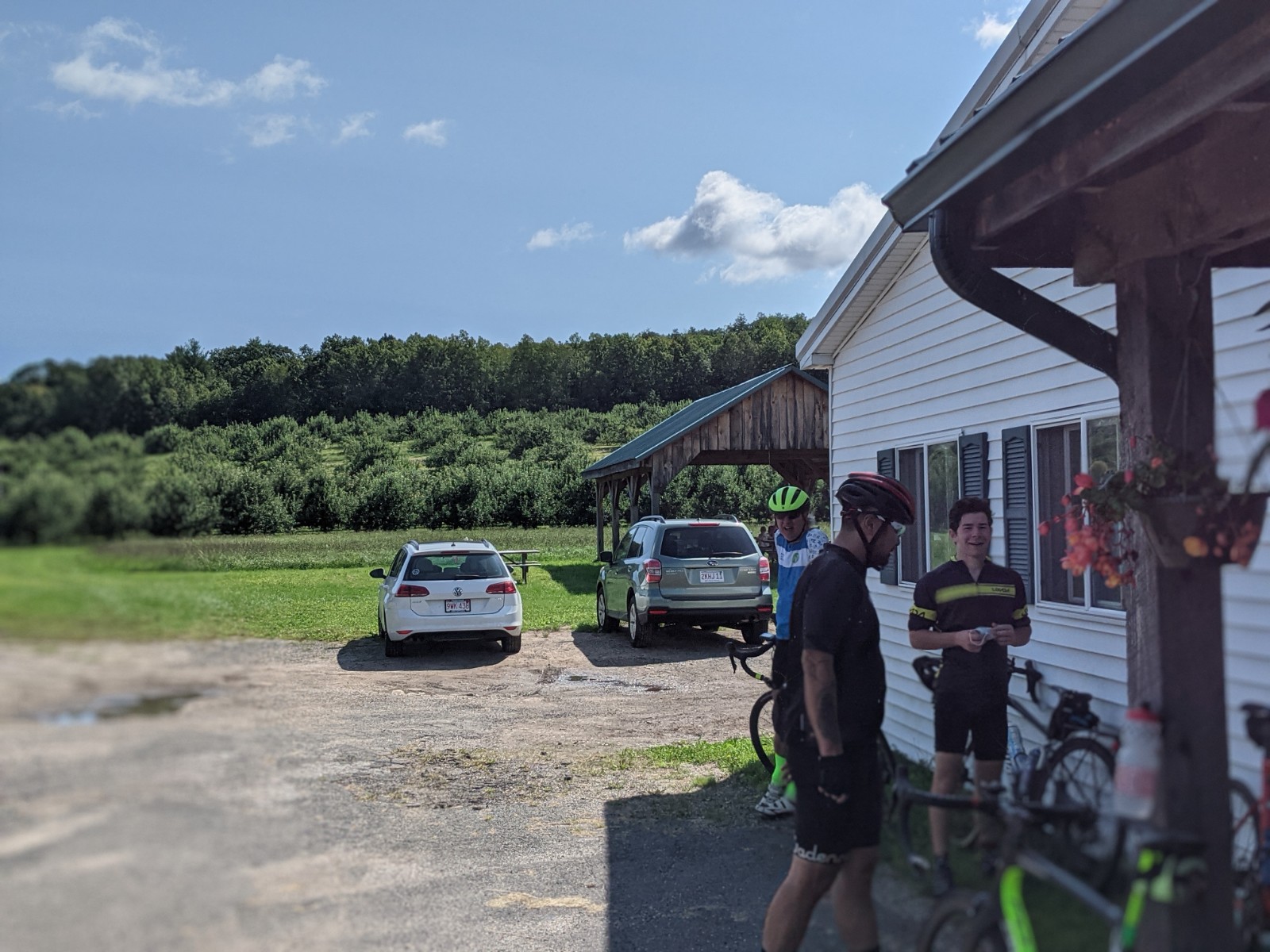 Link to the answer to the Bashista Orchard Question