On a cloudy, but much cooler (almost cold!) morning, we had nine arrive ready to tackle yet another challenging route I planned out.  All week I was tracking the weather- initially it looked pretty grim, with showers all day, but by the end of the week, there were few raindrops on the forecast map.  I had a few requests (really!) to do one of the harder climbs in Western MA- E. Hawley Rd.  This is well known by the Tour of the Hilltowns racers, and sits right next to Berkshire East.

We had a slow start.  We barley got past Northampton High School, and Roberto had a flat.  Likely due to the mess of a road there.  Once repaired and rolling again, he still did not have enough pressure in the tire, so John offered the use of his air pump at home, conveniently located just a half mile away in Fairway Village.  We all had a nice tour of Fairway Village (it has a golf course who knew?) as we waited.

It was a nice social pedal up River Rd out of Leeds and a brisk pace into Whatley, slowing the pace (a bit) up the climbs past the reservoirs into Conway.  After a break in Conway, we were off headed to Shelburne Falls- the usual small kicker climbs to get us warmed up for later.  Once we were over those, the general descent into the Falls unfortunately had the group broken apart all they way to our rest stop at McCusker’s Market.  John peeled off on Pine Hill Rd in the middle of the descent.

After some coffee and cookies, we headed out toward Rte 112 and then turned up toward the village center of Buckland.  Yes, I said up- of course!  Instead of taking the busy Rte 2, there is a nice scenic road just east of the Berkshire East mountain- it starts with a short, but painful (sorry!) 12% climb up out of the village, up Walnut Hill, then screams back down to flat along the Deerfield River and train tracks.

With all that warmup out of the way, we made our turn to the main event- E. Hawley Rd.  I don’t need to repeat how much of a leg buster this is.  It climbs over 1000 feet in just about four miles.  It hurts.  But is it beautiful- especially if you take a minute and look back.  The racing legs – Jonathan, Sam, Melissa, pretty much made it look like I was walking up in comparison!  I lost sight of them within minutes.

Charlie did a great job providing a draft up the hill: 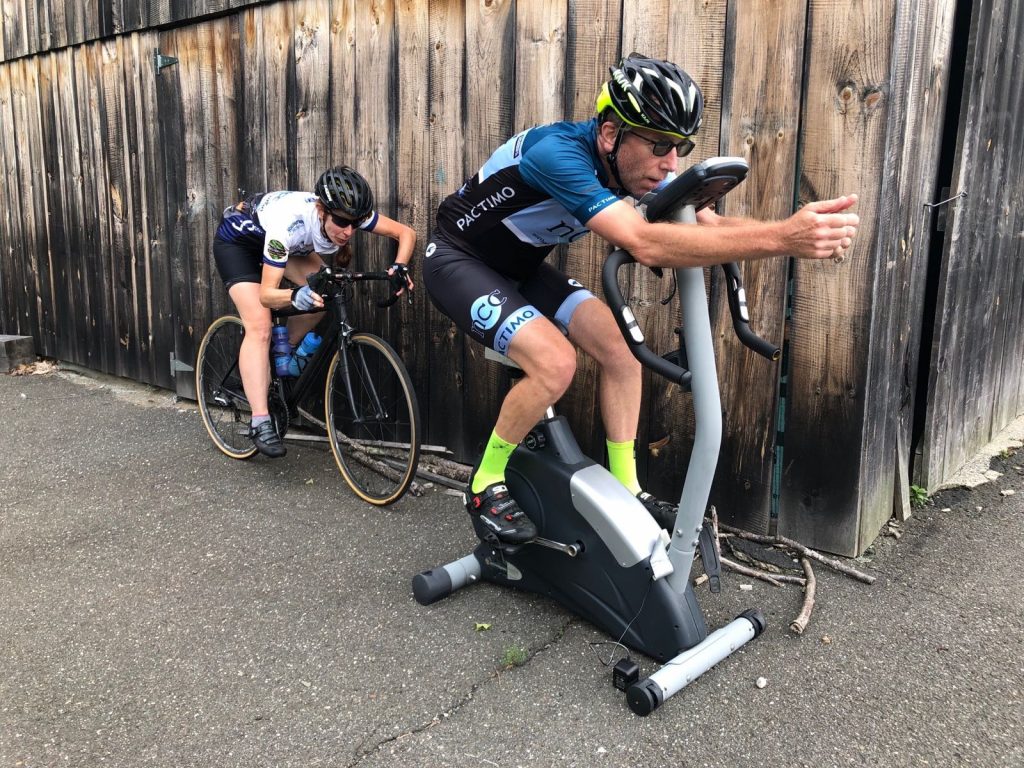 At the regroup point (where I bet the leaders had time for a hamburger and beer as they waited), we noted a cyclist that had just scaled Clesson Brook Rd with a toddler in the back!  Wow- and we thought our climb was hard!

Anyhow, I think we all enjoyed the Watson Rd / Bear Swamp area- kind of like “top of the world” for views. A nice descent all the way down to Rte 112.   Hope everyone agreed it was worth the effort!

We did not need more refreshments so pedaled through the center of Ashfield, and flew down Rte 116 from the center to the bend at Creamery Rd (where the ThNR ride regroups). It was a pleasure to ride this section, as we usually don’t for various reasons.  Roberto kept on Rte 116 for home in Amherst.

My choice of how to return to Williamsburg got a few grumbles- the final major climb of the day up Williamsburg Rd (ThNR reverse).  Again, a route we don’t usually take, and it is so much better than doubling back.  But, yeah, more climbing.

The return to town was rapid- always fun to descend Ashfield Mountain (what I call it) from Conway, rather than climb it as we do so often.  We saw our first sign of rain showers here with wet roads for a couple miles, but it did not rain on us here. I was unable to keep on the descent train here, which was okay not to get road splat on my glasses anyway.

We returned to downtown via South St and Audobon Rd, at which time we felt a few raindrops, but they quickly cleared.  Jonathan peeled off on Kennedy Rd for home.

Next week is the final official SMR of the season!  The following week- Saturday September 11, is the NCC Greylock TT.  The club is putting this together at the absolute last minute.  We can use your support.  Race it. (Active NCC members qualify for a $10 discount on their entry fee.) Or-  Volunteer!