Before I launch into my usual nonsense, there are two NCC not-to-be-missed events to put on your calendars:

1 – The Final Group Ride Party will take place on September 8, 2021, 7:30 pm at a local establishment to be determined. This will include beer and pizza on the club. Before that, at 5:30, the A, B and C and other groups, will gather at the Academy for a friendly (no-drop) 30 mile to Sunderland and back at a leisurely pace, 15-18 mph. We can split at the Sunderland-Hadley town line on the way back. We will end at our host restaurant and toast the group riding respite to what has been an otherwise difficult season of rain and COVID.

2 – The Annual Greylock Hillclimb Bumps Race will take place on September 11, 2021 at the Heritage Park in North Adams on the north side of Mt Greylock. Sign up for volunteering or race or both now at the following: https://www.nohobikeclub.org/greylock-hillclimb-time-trial. This is a classic.

Last night nearly 8 riders started at the Academy and another 5 joined on the route. It was warm and muggy. The A and B Groups split in Hatfield. On River Road West, most of the B group worked on establishing a rotating paceline – maintaining a steady speed on the left and pulling off to the right as soon as one got to the front and dropping back. It was an experiment with mixed reviews. We will discuss doing it again next week.

And now for the nonsense.

You may or may not have not noticed that I have not submitted a WNR Ride Report for about a month. I was tired of either ignoring or working in a pitiable excuse for my getting dropped. I decided that I was not going to write a Report until I finished with the group. I announced my decision to the group and they immediately increased their speed. I stuck with it because I had written in my head what I thought would be a hilarious ride report about finally completing the ride with the group. I couldn’t wait. Nor, for the last month, could I finish with the group. 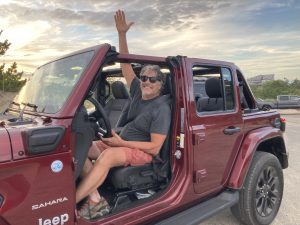 This was a difficult goal to achieve. There was a week where I won the town line “sprint” that no one else challenged, then got dropped, and I did not write to thank my lead-out group of 15 riders. I sacrificed scribbling about trying to get the weather cancellations right, whether it was that the thunderstorm cleared just at 5:30, or started just at 5:30. I missed out on writing about purchasing a new electric Jeep and ten minutes later rolling up to the group just as it set out, where I could have written a thousand words.

I am pleased to announce that last night, due to the riders slowing down, I finished with the group. Unfortunately I can’t remember a word of that hilarious ride report I had written in my head.

See you all at next week’s ride. Maybe I’ll drive.