Wow- what a great day we had on the B ride.  I was pretty sure that given the weather forecast and posting a longer than typical ride for the second week in a row, I’d have just a few riders.  I was wrong!  Just over a dozen opted for the 77-ish mile, 3700′-ish route I had planned.  When I left home in Easthampton to ride to the park, clouds had covered the beautiful sunshine I saw when I woke up an hour earlier, and I even felt a few rain drops.  But, the radar showed nothing major.  We welcomed two guests and headed out of town on the Wednesday Night Ride route with very humid conditions and about a temperature of 72F.

Once on the flats in Hatfield, etc, I had asked we keep a reasonable pace, as it is Saturday- to be social. We all did a great job with that and I think everyone equally appreciated it.  Once we crossed 116 to the northern section of River Rd, we did the same until the rollers, as expected- the group broke up a bit.

We took the bike path in Deerfield that starts at the train depot, and takes us over the junction of the Connecticut and Deerfield rivers.  Today, that is the best route over the river into Montague, as the historic General Pierce bridge is closed for repairs and restoration.

After a lovely ride past the Turners Falls canal and historic factories, we stopped for our first hydration stop.  The C ride rolled in just as we were ready to depart- it was great to have a brief chance for everyone to check-in.  As planned, I checked the radar at this point and it was pretty much clear with no indication of showers or storms in the next several hours.

After a relatively flat ride so far, the climb up to Gill opened up the legs a bit more.  Unfortunately there really was not a “top” of the climb here, and the road descends quite a bit to Rte 10, so the group got split into two, with the lead group not in sight. All good though, we regrouped and headed out to the center of Northfield, to what I deem the main event of the ride.

As mentioned in my pre-ride communication- “the other Gulf Rd” is indeed a challenge- comparable to the one in Belchertown.  This thing – taking you up Brush Mountain- never seems to end- rising about 800 feet over 2 miles, at an average of 7.3%, maxing out at 16% in there somewhere.  Nevertheless, it is beautiful, though had a lot of traffic today – perhaps because it is a shortcut between Rte 10 and Rte 2.  There was major washout damage from the recent storms, and as such we saw the large sign stating “road closed August 23 until job is done”.  I don’t think I have ever seen a construction sign stated that way!  I have to call out kudos to our guest Alli here… being from DC, she made it to the top and told us that was the most difficult thing she has ever done!  Congrats…. so happy we have these challenge features here in Western Mass.

The descent was sweet and made the climb worth it.

Being it so humid, we were already emptying our bottles so we made a second stop at the base of the climb, at a store with no name… “ATM”?? 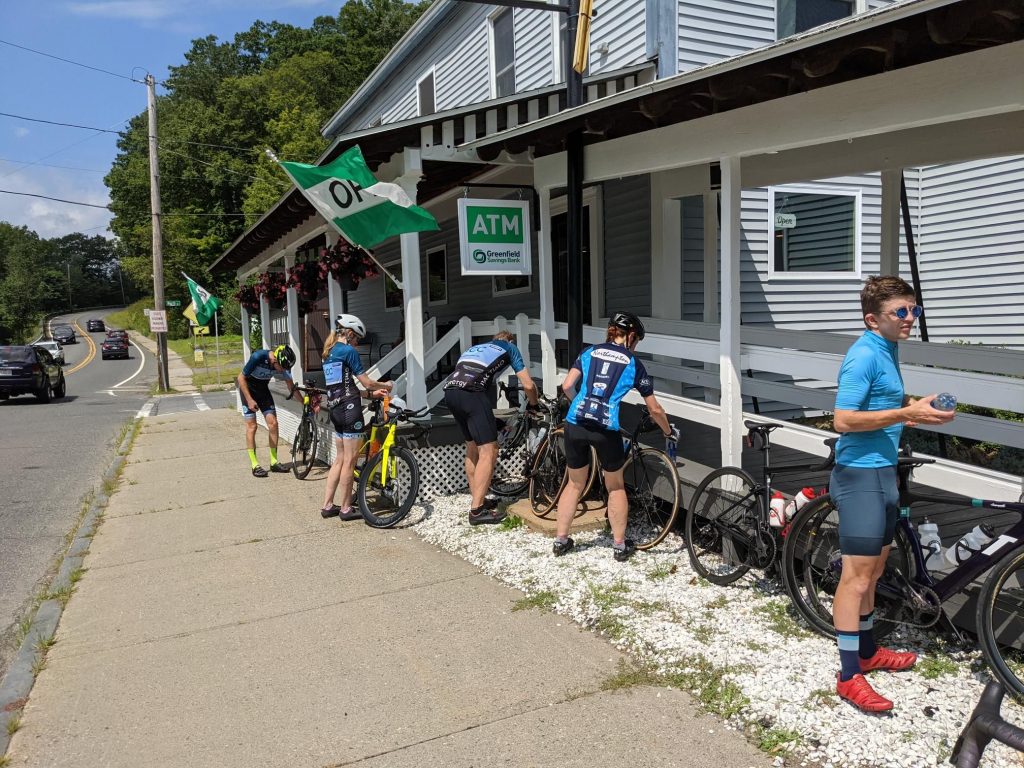 Onward west on the busy Rte 2 for a bit.  I do want to mention how important it is in group rides to call out obstacles and relay it back.  On this stretch we almost had a devastating crash because a large hole in the road was not relayed through the group. Luckily it was avoided at the very last second, and we made our turn, over the Millers River and train tracks to our second major climb (but not as steep) of the day. Farley Rd is quiet and beautiful.  Farley parallels Wendell State Forrest to West St where we finally get to start descending (all downhill from here?)  Unfortunately, John M broke his rear derailer cable, so headed back down Farley to Millers Falls and home.

We continued down past Wyola and stopped for a third hydration at the Leverett Co-Op where things were hoppin’!  There was a band and more.  Not all SMR’s have three stops, but we adjust with weather, and today with the high humidity, it was necessary.  We had a little fun- our guest Alli bought and shared pickles with us all- very much appreciated!  Melissa took this picture, and- well- how cool is that arrow?  This is real- no Instragam or photoshopping! 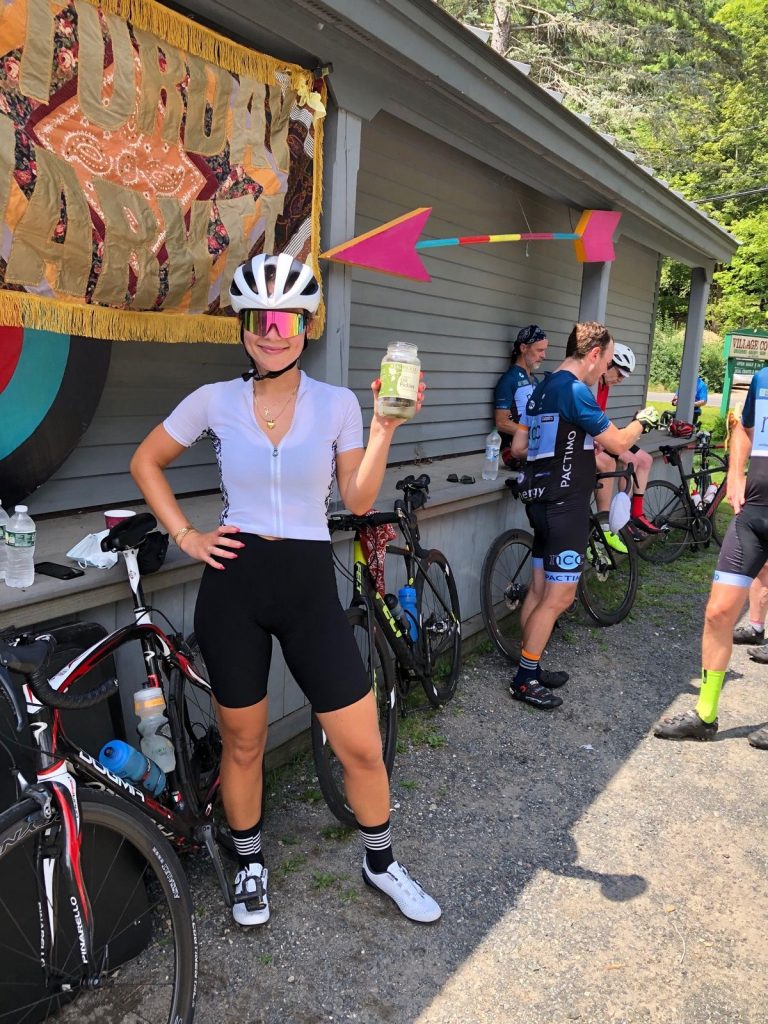 From here the route put us into Montague, and Rte 47, so basically it was back to the Wednesday Night Ride route home.  Out of Sunderland the pace was a bit brisk, but we kept it together, taking turns, and our reliable steam engine Ron, taking massive pulls.  As we exited Sunderland, into Hadley, it seemed like the oven all of a sudden turned on.  The sun was out full blast, and the pavement was hot.  So much for that cold front that was supposed to blow in?  We made it through the whole day with not an drop of rain, despite some dark clouds.

I (very much exhausted) had 75.95 miles. 3432′ and an average of 17.5 MPH on my computer at around 3 PM when we rolled back into town.  Was a pleasure riding with you all- thank you for your patience, hard work, and cooperation.