You never know what I will come up with for a Saturday B ride!  This week I stretched the mileage out a little bit more than typical so that we could enjoy (?) a specific climb off the Mohawk Trail, and then reward that effort with a gentle and quiet descent on little known back roads. Both places we normally don’t get out to aside from a special event.

10 riders arrived at Pulaski Park under hazy and humid conditions for the B ride, but only low 70’s to start- ready to put in a good day of cycling.

This week’s C ride planned a similar course up to Shelburne Falls.  I guess I wanted to get us B rider’s legs warmed up early by taking the “harder” route early on- up and over N. Farms Rd, rather than the gentle Spring St, River Rd, and Mountain St proposed by Don for the C ride.  In any case, it still is plenty of work from there up by the reservoirs to 116.  There was plenty of social time, and we got bit of a break with a flat several miles before McCusker’s Market.   We paused at the market to hydrate, and two riders chose to head back due to time constraints.

From the market begins in my opinion, the best part of the ride.  We headed over to Rte 2 west and rode in a nice paceline for around 13 miles, where it starts to climb to the Florida (MA!) line. Despite traffic, it does have decent shoulders- and best of all, the Deerfield river on one side (which looked mighty inviting with swimmers everywhere), and endless miles of views to the Berkshires in front of you.  Lucky for us, we were not going all the way up to the Florida peak today, but instead, just as we start to climb, we turn left to something better (or worse!).  We lost two riders at this point- one turning back for a shorter day, the other had a “free day” and headed up Rte 2 solo to Whitcomb peak. 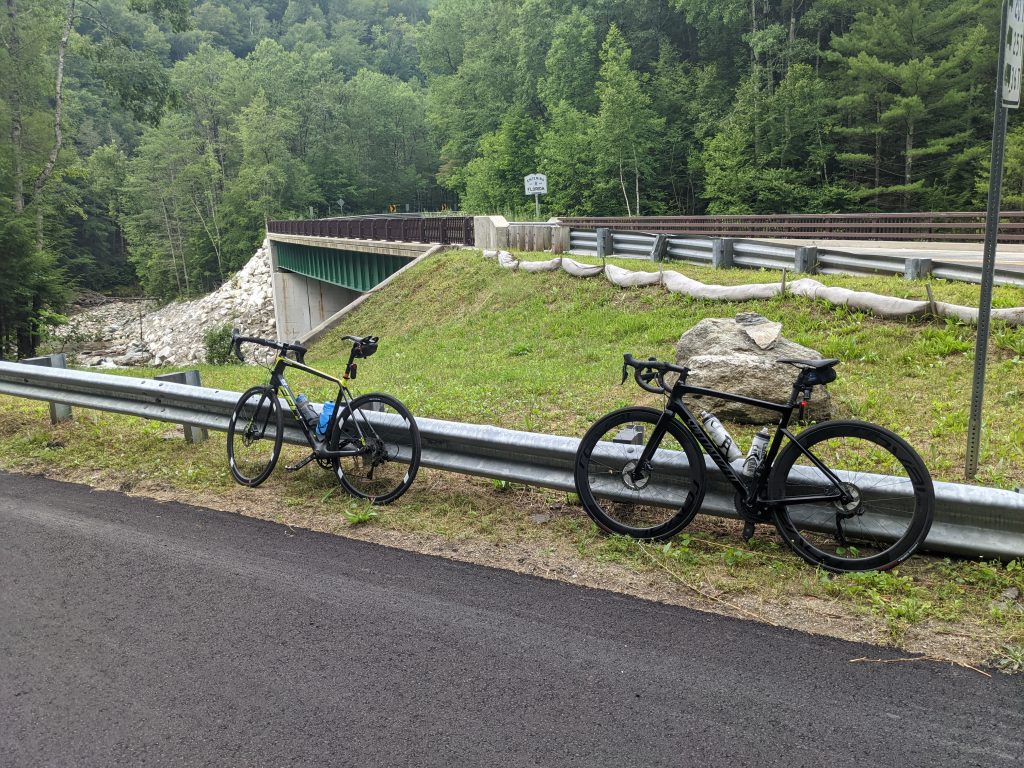 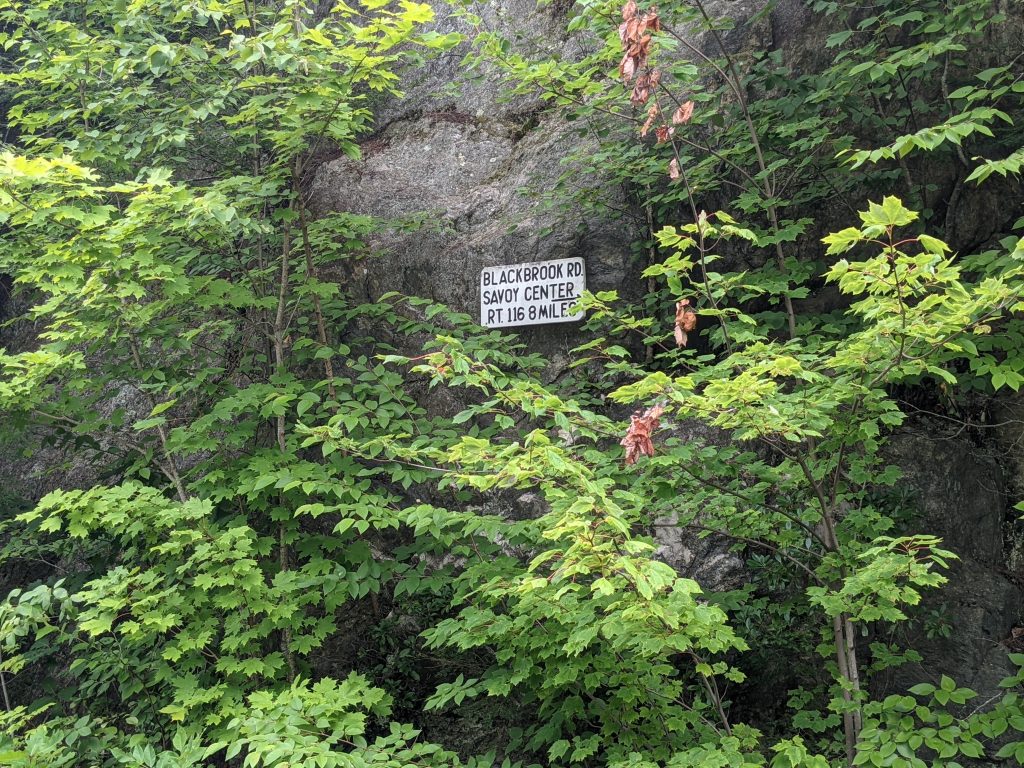 And so we arrived at the main event of the ride.  This whole area- Rte 2 in Charlemont – was severely damaged from hurricane Irene in 2011.  Rte 2 was closed for three months after due to the force of the Deerfield River. Our climb- Black Brook Rd – did not open back up until 2017, and $7M later.  In case you did not check the Strava segment…. it is hard, very hard.  1.5 miles over 600+ feet of gain with an average of 8% but a maximum of nearly 15%.

After a regroup, we proceeded through the “main roads” of Savoy- lots of rollers- and climbs to keep us honest.  But epic views nevertheless.

Finally time to loose some elevation!  We turned off of Rte 8a onto River Rd- which has been mostly freshly repaved since the last time I have ridden it.  It was a relaxing and gentle descent into Cummington, which took us past Windsor Jambs- a jem of rocks and waterfalls.  Unfortunately both state park marker signs have been stolen. 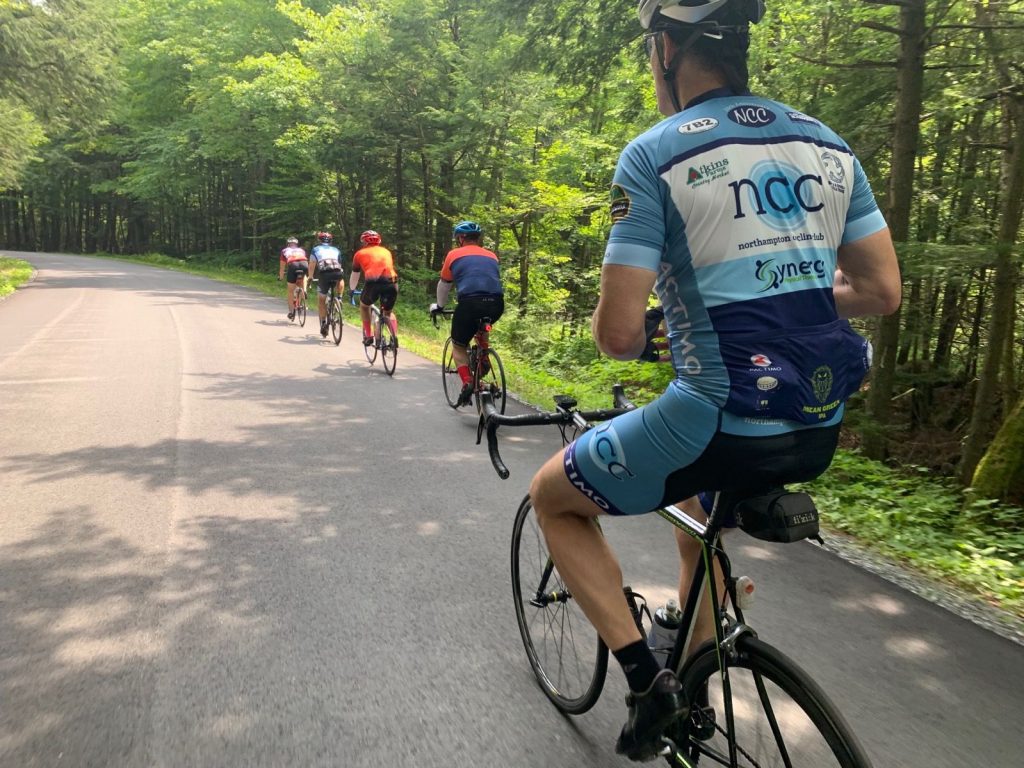 A little video of us enjoying the River Rd:

Once we got to Rte 9, we had a little confusion as to which way the Creamery was. I had not marked it as a waypoint on my bike computer, so had to go by brain power.  We were getting pretty dry so needed to stop sooner than the center of Goshen.  We turned right- heading west…. but Jonathan and I started questioning it as we headed into the climbing lanes into Windsor.  A quick look at a larger map revealed that we had popped out much further west of the creamery than I had thought.

The Creamery was hoppin’ for lunch!  We cleaned them out of the Gatorade and cookies.  And of course, as with last week’s C ride there was the famous cow bench to check out!

Hydrated, it was time to tackle the last 20 miles to home- the hottest of the day.  We had another great paceline with Henry taking the lead for many miles up to the last climb of the day into Goshen. Always a challenge being tired, but necessary.

After the last regroup in the center of Goshen, we said goodbye to Jonathan before the screaming descent into Williamsburg and worked together to get back downtown.  That pavement at the stop lights felt like a fryer!

Stay tuned for next week’s adventure!