Today’s weather was ideal for the trip up to Cummington. It was 61 degrees when we started our ride a little after 9 AM. Several of us were in long sleeves, either jersey, arm warmers, or jackets, for the entire ride. It felt more like late September than the final day in July.

We had nine riders. Our big test for the day was the climb from Williamsburg to Chesterfield. This is the same climb that is used for the NCC Time Trial/Hill Climb series. We all went at our own pace and regrouped at the top of the hill. We all finished the 5.9 mile climb between 27 and 37 minutes. Extra kudos to Tiffany, who joined us six days after her Iron Man in Lake Placid, NY. I’m not sure I would be able to walk, let alone ride a six-mile climb, after only a few days of rest. 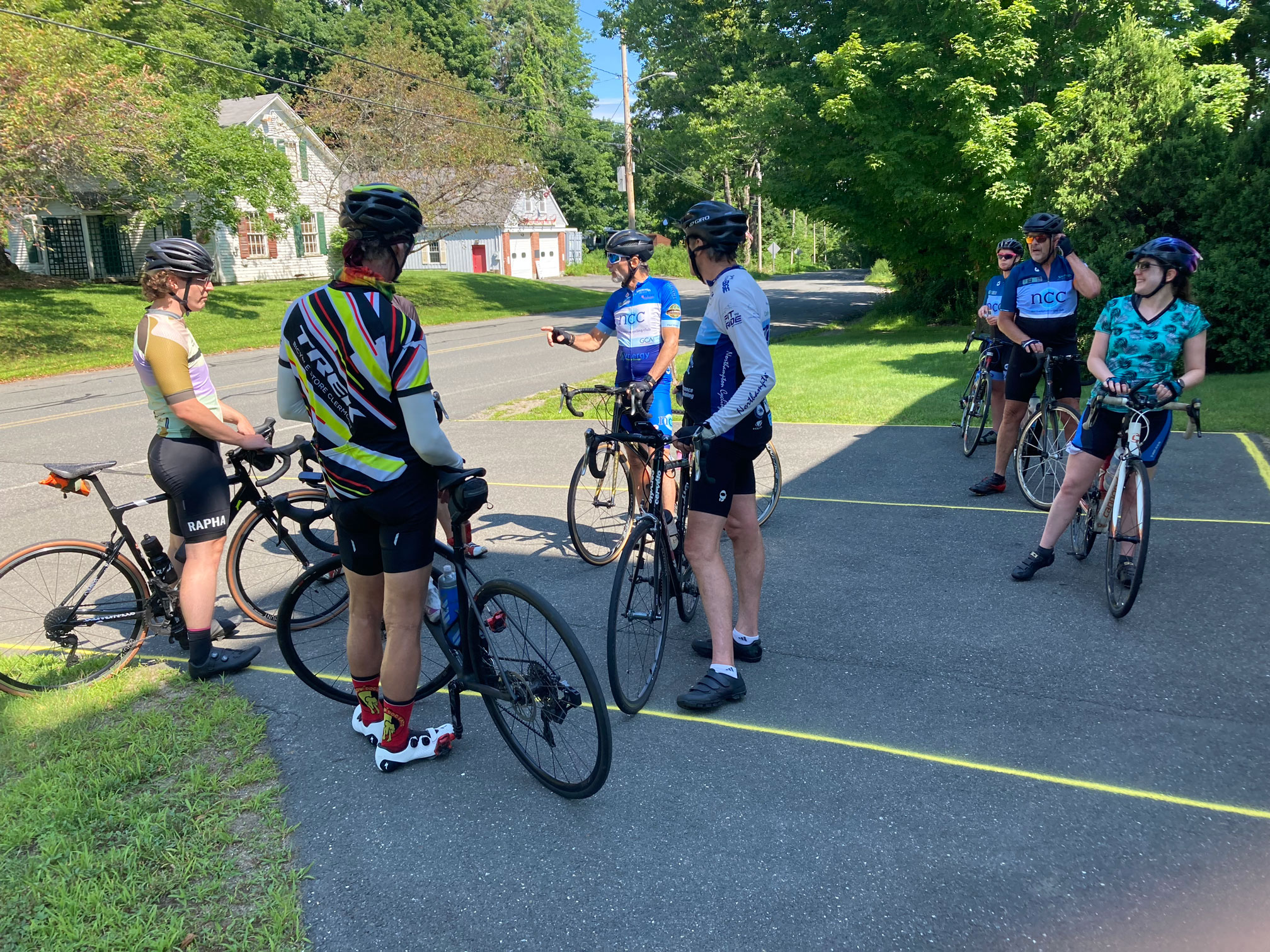 After a big climb comes a big descent. I hit 42 miles on the descent and I know others went even faster. Strava clocked John M at 44.7 miles per hour! Seven of us regrouped on Cummington Road, but we were missing Peter and Mark. We were growing concerned that something had occurred when they appeared. One of the two batteries in Mark’s electronic group set had died. Fortunately, he was able to switch the batteries so he could shift his rear cassette, but he rode the rest of the route in his big chain ring.

As we passed by the Cummington Fairgrounds, we saw a gaggle of geese just hanging out.

Our rest stop was at the Old Creamery in Cummington. It was a nice place to stop, part grocery store, part cafe. We ate food under the umbrella-covered picnic tables. I enjoyed a egg and bacon breakfast sandwich. John M. had a nice pastry, but admitted he was jealous of my sandwich. It was nice to chat with everyone as we recovered for the second half of our ride.

The Old Creamery had a bench that was shaped like a cow. According to the Old Creamery website, it is new and they are calling it a “cowch.” My three year old really likes cows, so John M. took my photo on the bench. Several others also joined the fun of of having their photo on the bench. I even think I heard John P. utter (pun intended) Bart Simpson’s catchphrase, “cowabunga” as I took a group photo. 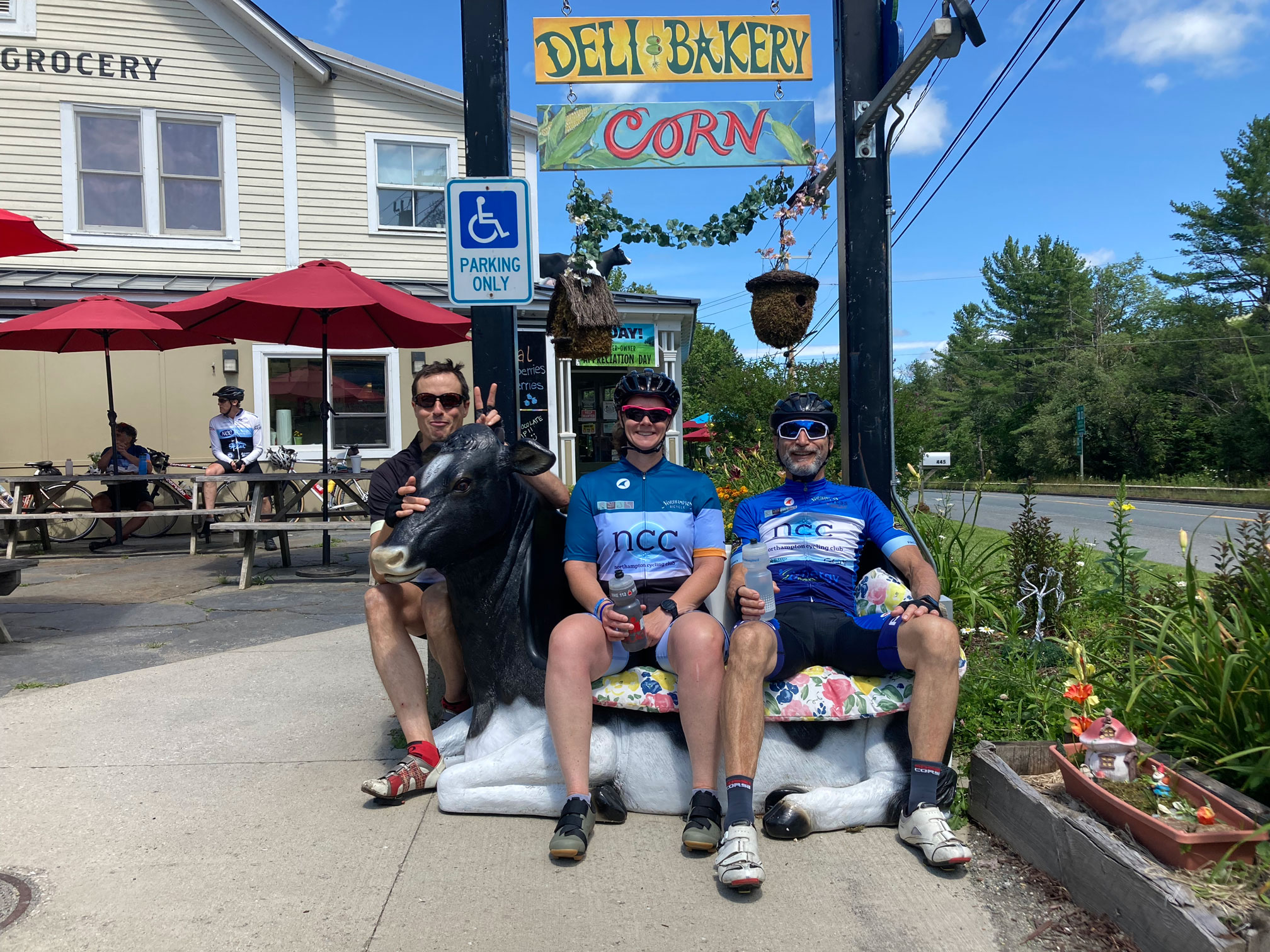 As we continued on down Route 112, Mark somehow got a decent size branch stuck in his derailleur cage. Fortunately, he was able to drag it for a mile or so until it was safe to stop and remove it. We turned on to Spruce Corners Road and we realized we were missing Teresa! Don went back a little ways and brought her back to the group. She wasn’t feeling well and decided to head back while the rest of us continued north.

Close to the end of Spruce Corner was a saw mill. The area smelled like freshly cut wood. I have not ridden much in the Cummington area before. It was beautiful up there. Throughout the area, you could hear and see water trickling down the hills. 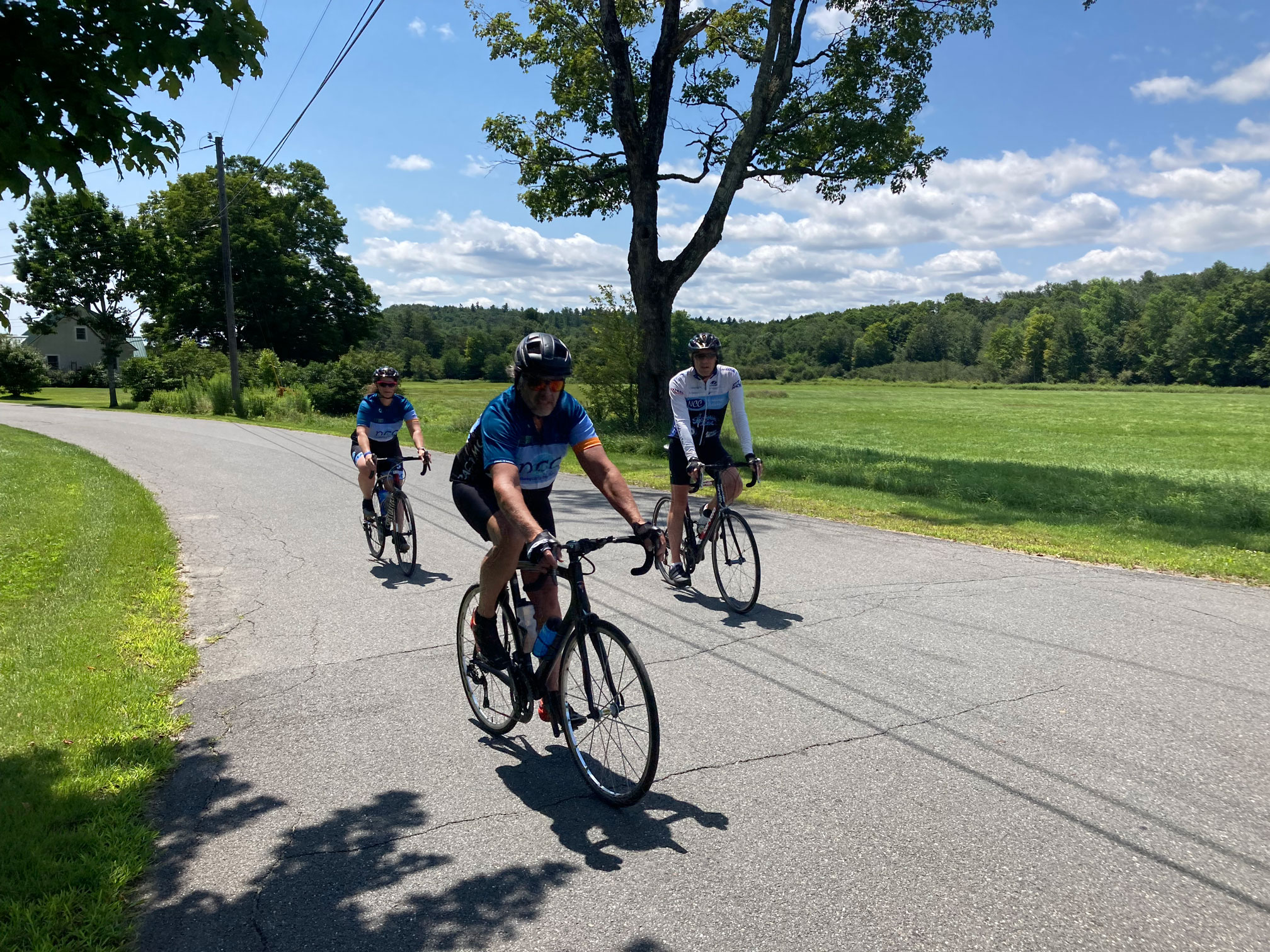 Around mile 41, the descending started. It was a lot of fun. We regrouped in the Goshen General Store parking lot. We encountered two cyclists on their way to Saratoga Springs, NY. We were less impressed with their single speed bicycles and greatly impressed by the axes they had on the side of their huge backpacks.

When we got to Williamsburg, we regrouped. Lynda G and Bob Johnson came up behind us. They were on their own climbing adventure. We all chatted for a few minutes before the final few miles back to Northampton.

Everyone seemed to enjoy the route. To be clear, I simply selected it from the NCC Route Library, which has many great rides to choose from.

In total, we rode approximately 56 miles with 3,640 feet of climbing. It is a rare day when the C ride equals the B ride’s climbing stats. We returned to Pulaski Park right at 2 PM.

To close out today’s report, here are some additional cow bench photos. 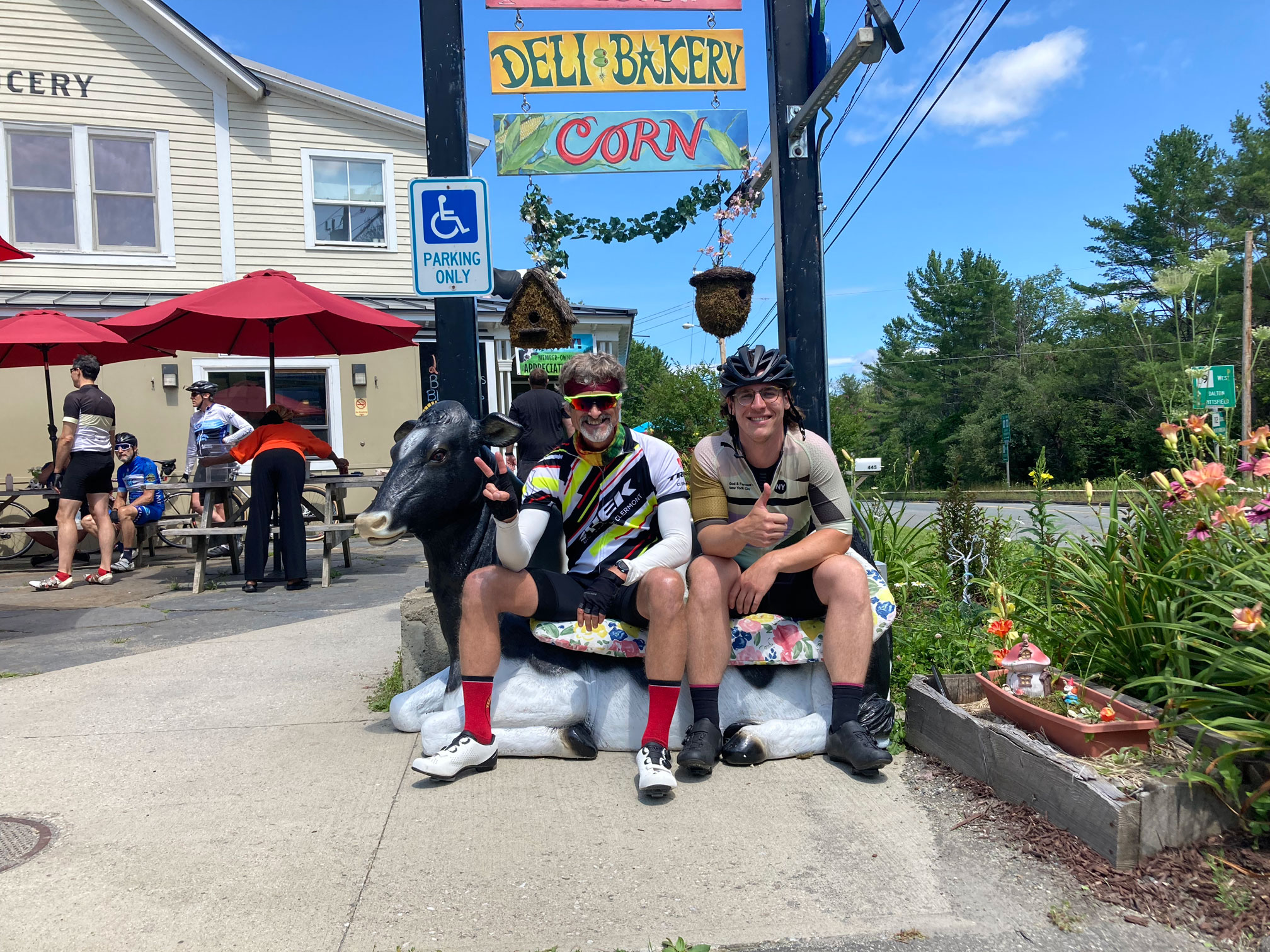 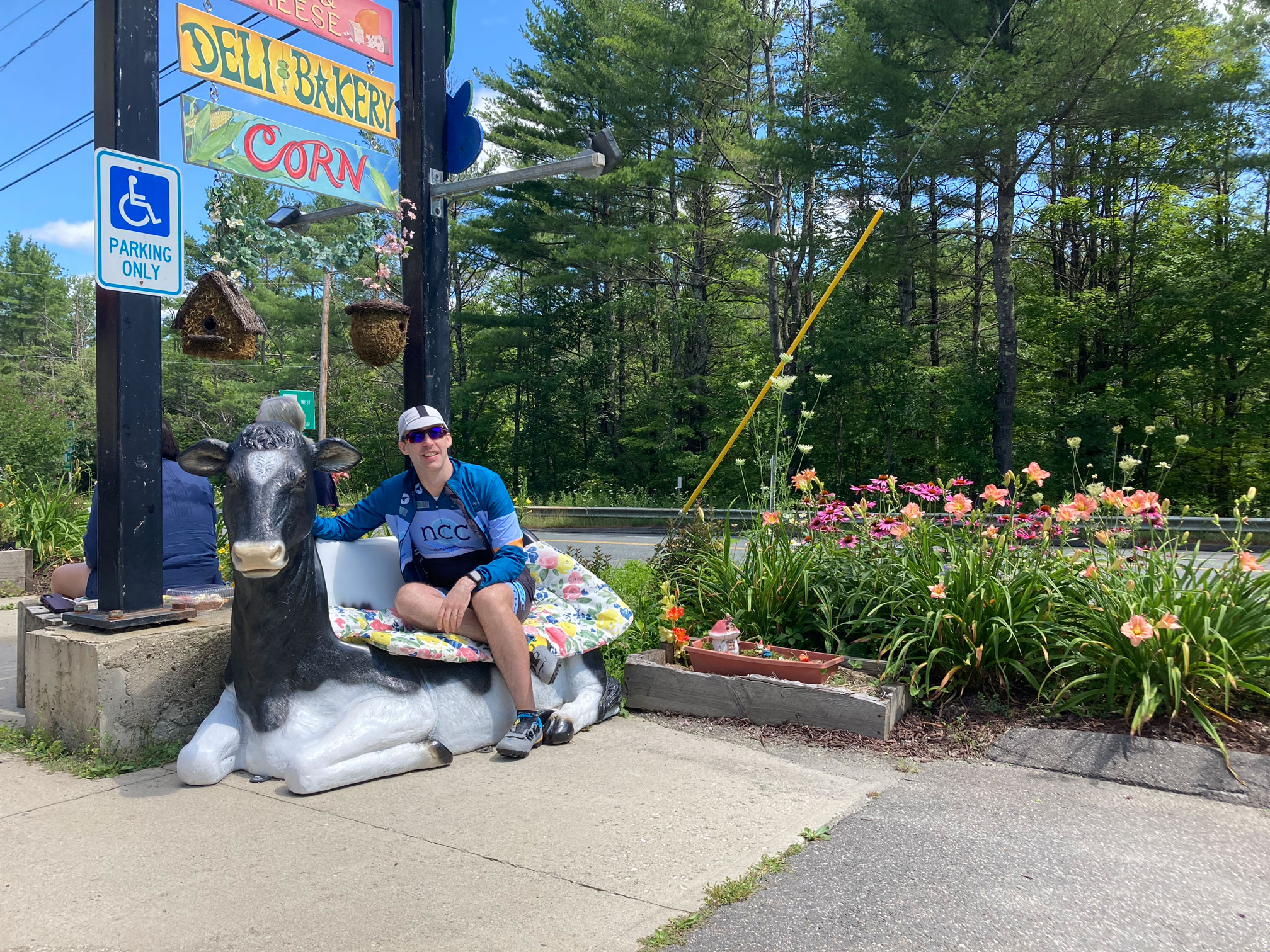