The weather was the concern again this morning. It was raining at 8 AM! Melissa Warwick, today’s B ride leader, and I touched base with John Coffey this morning. We decided to try the rides since there was no thunder in the forecast.

The rain stopped a little before our departure from Pulaski Park at 9 AM. In the C ride, we had nine participants. The roads were still wet at the beginning, so everyone kept the pace a bit slower to be cautious.

I rode with Jake on Haydenville Road, while Roger went ahead with the group. He diverted the lead group up Masterson Road, which is a nice little climb. This allowed Jake and I to get to the Whately Inn just behind the front seven riders. Jake turned off to Northampton and the rest of us kept going towards Deerfield.

Mark, who is up from Florida for the summer, and I had a good chat about the Tour de France. We are both impressed with Tadej Pogacar’s yellow jersey performance. Mark is loving cycling in Western Mass.

Once we were in Old Deefield, we went down Memorial Street, across Route 5, and over to Pine Nook. Before anyone gets alarmed, we did not head up Pine Nook very far because we knew that it becomes a steep dirt climb. Instead, we got onto Depot and then Wapping to arrive behind our rest stop, the Bittersweet Bakery and Cafe. These were new roads to many of us, which was nice to explore. 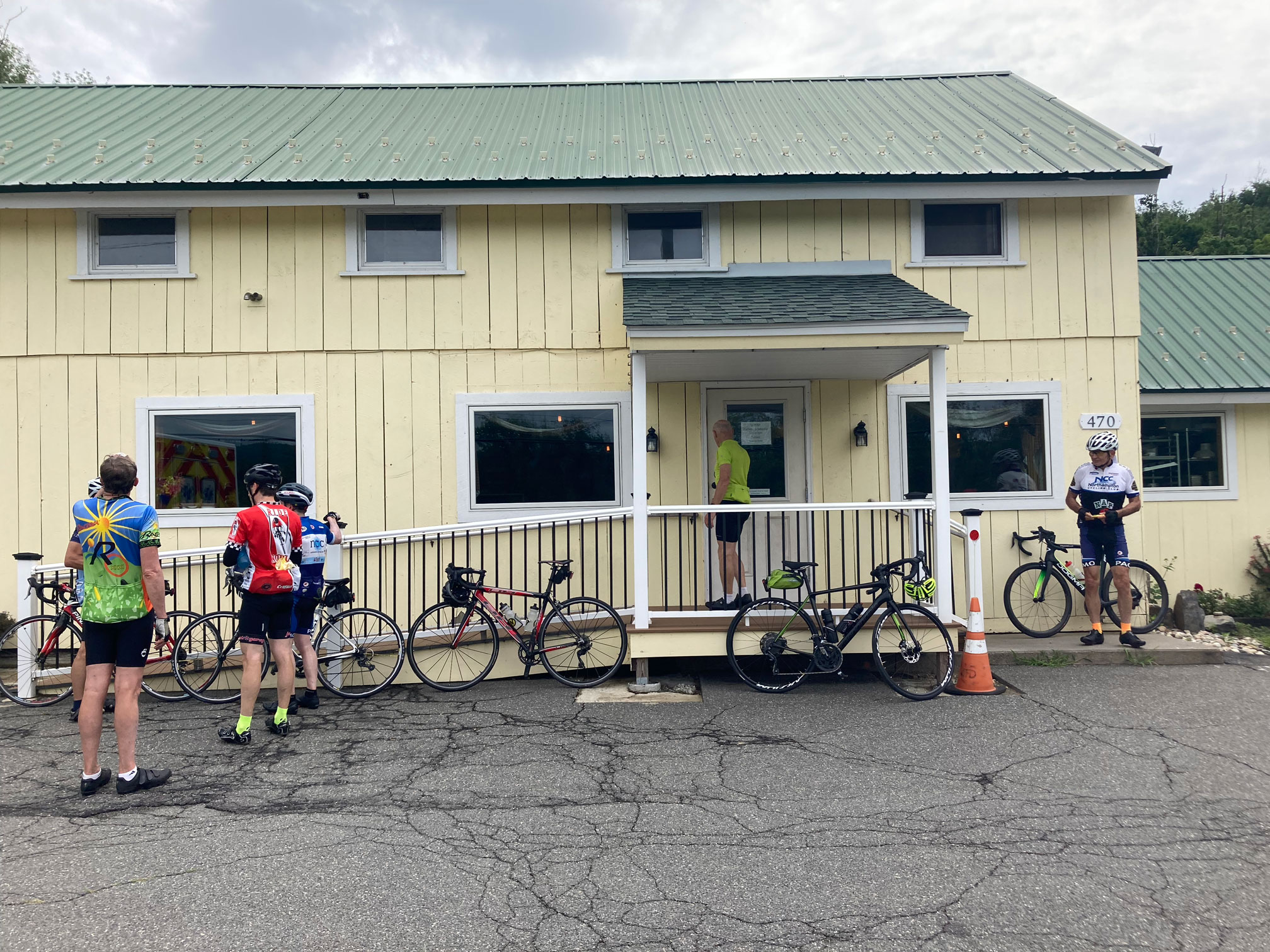 We all enjoyed the rest stop. Many riders got coffee and pastries. After a month of trying, I finally got a cinnamon roll, which was excellent. For those with allergies, some riders complimented the bakery for their gluten and nut free choices. Several of us discussed classic NCC jerseys (there were four different NCC jerseys in the group today), Ride Noho, and Roger even shared some local history with the group.

Shortly after departing the bakery, we stopped briefly on Wells Cross Road to admire the flowers. Dave loves to garden and was impressed with the field of flowers. Roger took off when we passed Lee Road and we were down to seven riders. 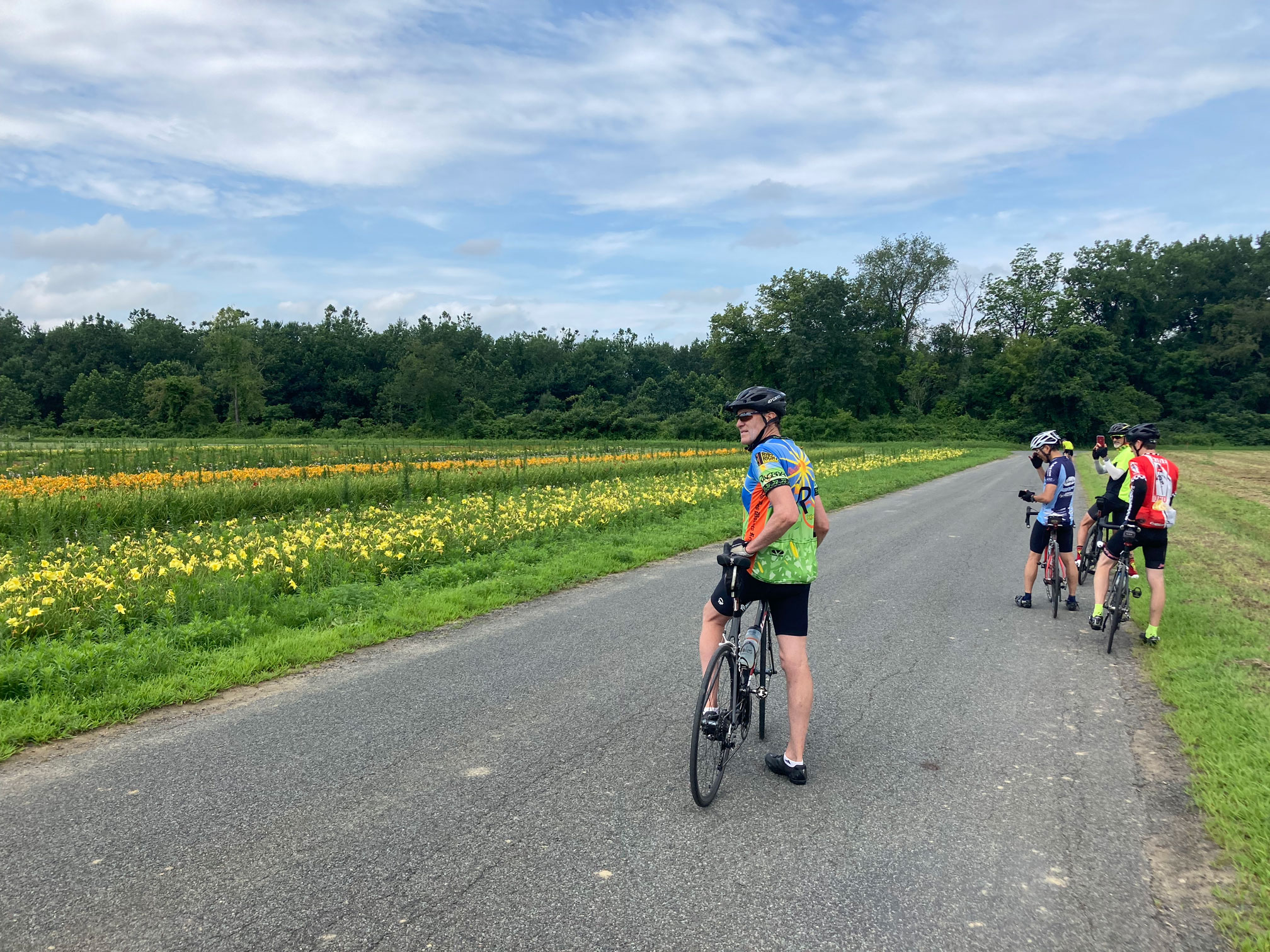 On Pine Street in Deerfield, my chain popped off. Juliusz was nice enough to give me gloves so my hands did not get all greasy. As we started riding again, Rich’s chain also came off. I think he was trying to make me feel better about my minor mechanical.

Going through Hatfield, we went up Cronin Hill. I was feeling good so I went for it. I got a personal best, but I have a long way to go to get a top 10 Strava position. I’m now tied with Rob, who was on today’s ride.

We made it back to Northampton around 12:40 PM. It got very hot towards the end of the ride (with 92% humidity), but overall it turned into a nice weather morning. The group did a great job with hand signals and verbal communication.

In total, we covered approximately 43 miles with 1,300 feet of climbing.