After several weeks of rain and thunderstorms, we were riding as a group tonight. The forecast at noon had a single-digit chance of rain, so of course we got soaked!

This was the first week of having two C ride sections. John Coffey led the introductory group and had five riders for the calmer pace edition. It also included more meetups to keep riders together. I led the more experienced group, and we had five riders. Both groups rode very similar routes, with the experienced group tacking on a few extra wet miles.

This was the first time the C group was split into two groups this year. It worked well, with pace adjusted for the riders in attendance. We will continue to try to match the pace to attendees, so don’t be afraid to join us!

The experienced group departed Pulaski Park first. By the time we passed Northampton High School, we were starting to get wet. Towards the end of Nonotuck Street, we stopped for a group photo in front of the Valley Solar vans. It is nice when one of the club sponsors is on our route. The rain/mist eased up slightly by the time we descended into Whately. Fortunately, there was little wind this afternoon. 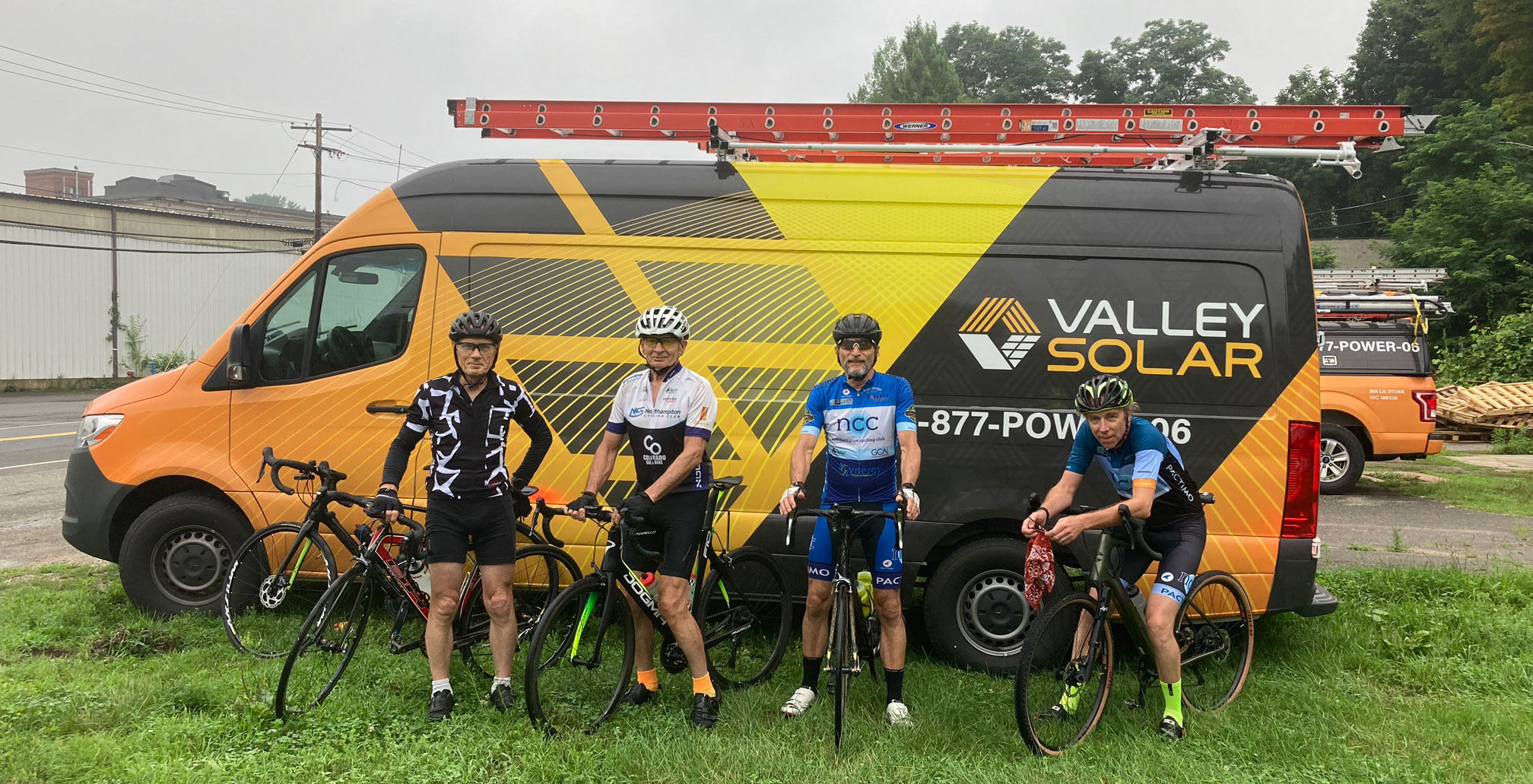 At some point, Charlie removed his glasses. I’m pretty sure he could not see most of the ride. Charlie may have had the correct idea using his gravel bike this evening.

With the Long Time Trial also happening today, we went to the end of Long Plains/Pine Street to give the time trialists a little more time on River Road. On the Pine Street curve, a family was gathered around a fire pit and appeared to be cooking hot dogs. Roger almost went back for some treats from the grill. The rain picked up again.

We saw one time trial participant, perhaps Andy MacDonald, heading north as we went south on River Road. We decided to turn onto School Street in Hatfield just in case to not get in the way of the time trialist’s return trip. We saw David, Henry, and Madeline as we went up Bridge Street.

The experienced group arrived back at Pulaski Park a little before 7:30 PM. We covered approximately 31 miles with 700 feet of climbing. Our moving time was 1 hour and 47 minutes. We went slightly faster than we should have for a C ride, but the rainy conditions provided motivation.

The introductory group covered 25 miles at a pace of 12.5 mph, arriving a little before 8:00 in town. With riders new to group riding, they talked about safety and signaling before the ride and at most regrouping stops. Given the rainy conditions, they avoided River Road in Hatfield by coming back on Long Plain Road — climbing Cronin Hill, which is a nice short climb. Two of the group members, Lloyd and Lauren were participating in their first group rides.

Despite the weather, all had a good time. A few headed to the Barb and Olive Bar at Northampton Bicycle after the ride.