Today marked a change in Saturday C ride. Aaron Walker, our regular C ride leader, has relocated to the West Coast. I took the lead for today’s ride with assistance from Don Frank, our regular Wednesday night ride leader.

We started planning today’s adventure on Thursday evening. Don suggested visiting the 2nd Street Baking Company in Turner’s Falls. After a quick perusal of the online menu, the thought of a warm cinnamon roll convinced me that Don had the right idea. The route was mapped and we thought everything was perfect. I awoke on Friday morning to an e-mail from John Coffey informing us that the bakery did not survive the pandemic! Don and I were devastated, but we were still heading to Turner’s Falls.

We left Pulaski Park a little after 9:30. We had 14 riders with us, including a few first-time riders.

Unfortunately, we had an accident. At about the ten mile mark, we had some miscommunication throughout the group. We were supposed to turn right onto Plumtree Road; a few went straight, and others turned. Two riders clipped wheels and the second rider went down very hard. We called 911 and diverted traffic. A nurse happened to be driving by and stopped to assist. The police came and were nice enough to take our injured rider’s bike back to the station. Then the ambulance arrived and took our rider to the hospital.

Don stayed with our injured rider, and I led the group on. We rode a half mile up the road and stopped. Everyone was a bit shaken. We talked and decided to keep riding. We probably over-communicated the rest of the ride. Hand signals and verbal cues were used for turns, slowing down, and stopping.

Our route allowed us to bypass the construction on Route 47 in Sunderland. We saw the Sunderland Town Park and arrived back on 47 at the base of Claybrook Road.

We stopped briefly at the waterfall on Falls Road in Sunderland before heading north to Turner’s Fall. We missed one turn, but quickly turned around and got back on track.

Around the halfway point, we stopped to refuel. Granted it was not a bakery, but a very glamorous gas station convenience store. Unfortunately, gas stations do not carry mouthwatering cinnamon rolls. Don met up with us at the rest stop. James refilled his tubeless tire. His flat sealed, but he need to replace some lost air. 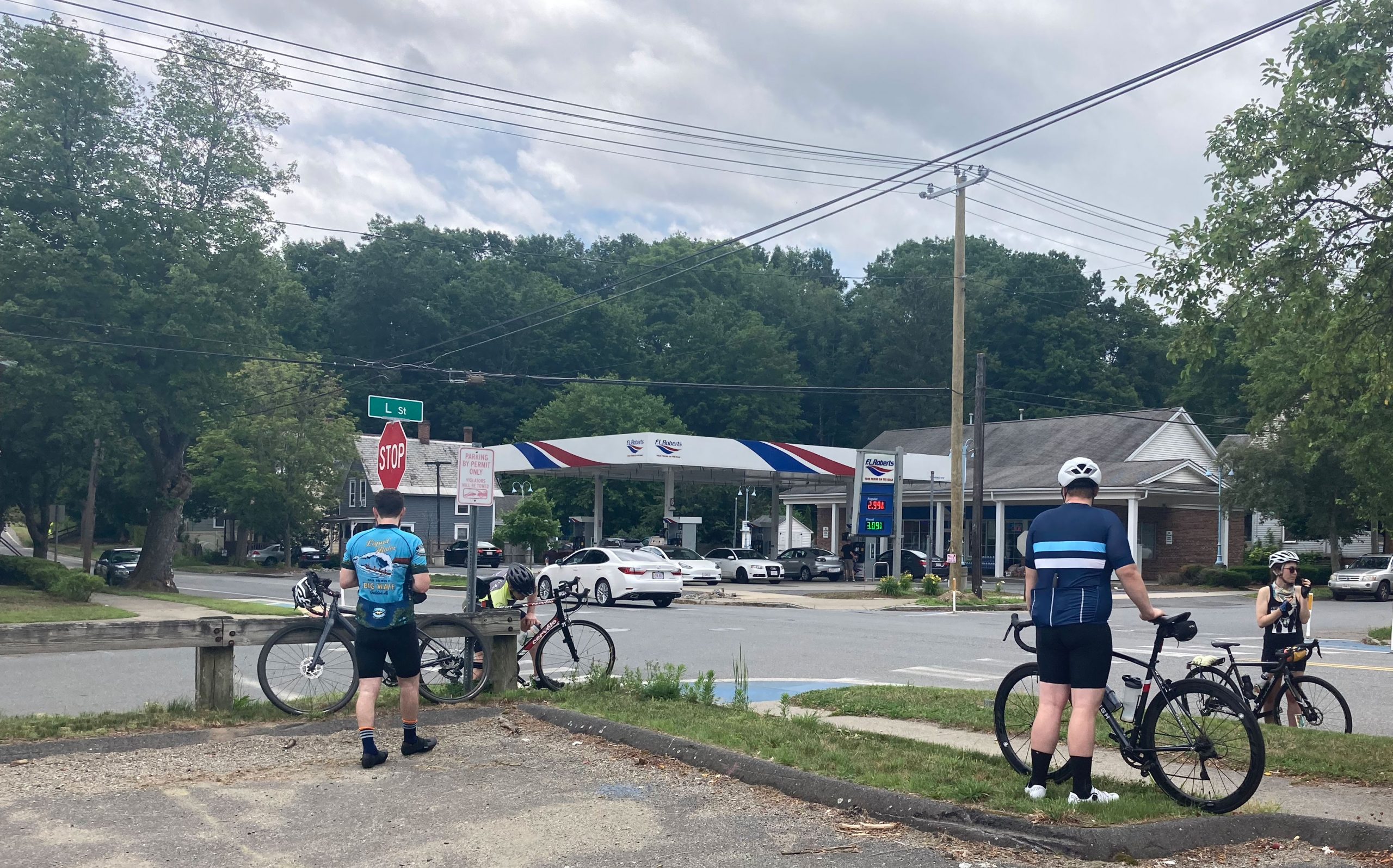 As we rode up 116 in Deerfield, we got separated by the traffic light. In the lead group, I stopped, but somehow my chain popped off and got stuck on the chain catcher. After struggling with it for a while, Don assisted and got it loose.

We decided to make one last stop at the Whately Library. Many riders had never seen the spectacular views. The grounds of the library appeared to be set up for a wedding later today. 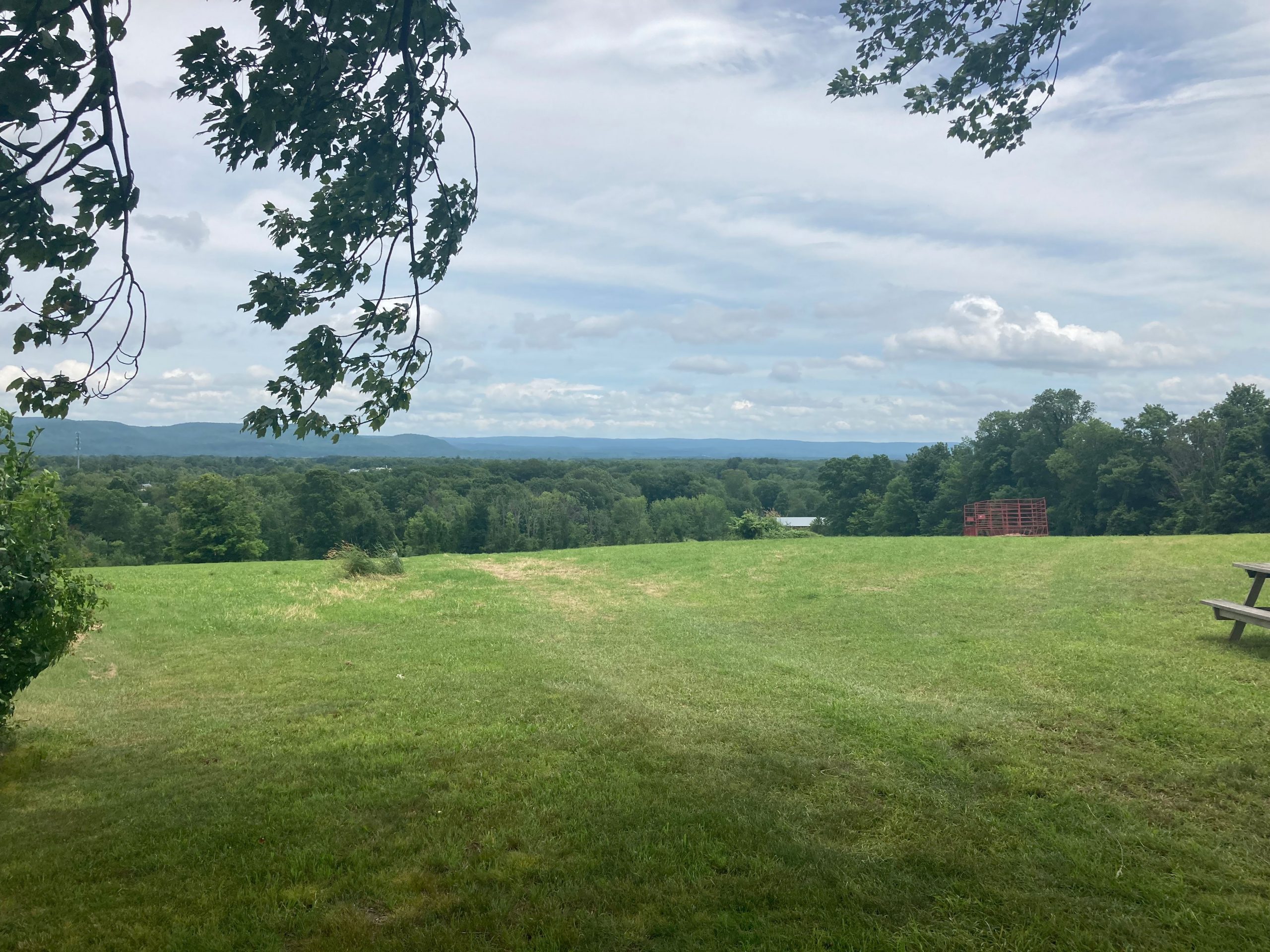 In total, we rode approximately 50.5 miles with 1,230 feet of climbing. Our ride time was just under 3 hours and 30 minutes.

After the ride I stopped by the hospital. I was not able to see our injured rider, but I talked with her spouse. He reported she was in good spirits.

Hopefully our next adventure will be less eventful.