I have been leading the Wednesday Night Ride, (WNR) since 2004ish. Before the new board of directors took over, the WNR was basically a 40-mile pedal-to-the-metal ordeal. There were as many as 30 riders, white knuckling and bumping the whole way. It was not altogether welcoming to many and it was dangerous to all. For that reason, in 2003, it was cancelled. In 2004 the new board started it again. Our main innovation was that we separated the faster, “A” riders, from the “B” riders, who were good enough. The B Ride was my kind of ride, until 2019. By then, due to old age and pastries, mostly pastries, I was only able to complete the B Ride with any part of the B Group about 75% of the time, even though they waited for me at the end of the only climb. The winter between 2019 and 2020 added a lot more pastries, some very special couch time and an extra year of age. By March 2020 it was clear to me that I would no longer be able to keep up with the B Group at all.

Many of us have had those dreams where for some reason we are naked in public or we walk into a class to learn that today is the final exam, and we have not opened the text book. It is hard to believe now, but I was not the best student in high school. I could pass the b.s. classes but in my senior year of high school, I had to take and pass either calculus, algebra or maybe division. You know, math. Even now I cannot recall which math class loomed over me, but it was the last day of senior year and if I did not pass that math final exam, I would not graduate high school. As I sat in someone’s car in the parking lot an hour before the exam, I tied up my ponytail (it was the 1970s) and said, “Damn, I have not even opened the book.” There was no way I was going to pass that exam. I was not going to graduate high school. 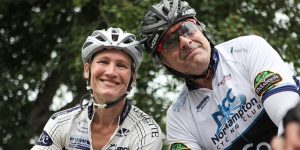 Then, I heard an enormous blast and felt the ground shake. I could see smoke coming out of the cafeteria area of the school, the location of the exam. There was another senior in my high school, Larry McGullicuddy, whom I barely knew. He completed his last exam, about an hour before I was scheduled to take my calculus, algebra or maybe division exam, and celebrated by throwing an M80 firecracker into his locker. It blew up his locker and the lunchroom. They called off the last exams and everyone who had an exam scheduled for then, including me, got a passing grade. That is why I went to college, cut my hair, found the woman of my dreams, went post grad and even taught in my chosen field, which was not math. And, perhaps, that is why from 2004-2019 I could keep up with the B group, most of the time.

In March of 2020 it was clear to me that my winter training was the math textbook of my group ride. I had not even opened the book. Then the pandemic arrived and caused untold misery, but for my purposes, it cancelled the 2020 WNR. COVID 19 was the Larry McGullicuddy of my B Ride. I don’t think I missed anything from not knowing math, although if I did, maybe I would have been a doctor. Maybe I won’t be able to keep up with the B Riders this year either, but on the other hand, maybe it really doesn’t matter.

The WNR covers approximately 40 miles. It starts at Pulaski Park in Northampton and goes north through Hatfield to the Bookmill in Montague before returning to Northampton through Hadley.