The NCC is excited to announce a partnership with Oculus, the world’s leading maker of virtual-reality headsets, to release a new app on the Oculus Rift platform allowing club members to experience an immersive virtual world experience while racing outdoors in the club’s Tuesday night Time Trial/Hill Climb series. 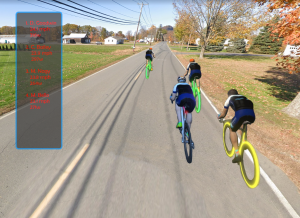 The NCC is looking forward to returning to our regular group race format for the Tuesday night events, but at least for the start of the 2021 season, the Tuesday night races will be conducted as solo events, with each rider racing separately and reporting their time. The new app brings the group race experience to solo rides, allowing riders to race on the road while wearing the Rift headset, and experience a live view of other riders on the course.

The app works in real time while riding the course outdoors, providing a live view in the Rift display of the relative position of all other riders who have completed the course that day, along with a data display showing each rider’s current speed, power output, heart rate, and cadence. At a glance, you can see who is in front of you and who is behind, who is cruising easily and who is hammering at their limit. The app also integrates with Garmin’s Varia radar system to display the location of nearby vehicles on the display. Users without Varia radar can use the Rift’s optional auditory feedback module and in-ear speakers to listen for and avoid nearby vehicles. 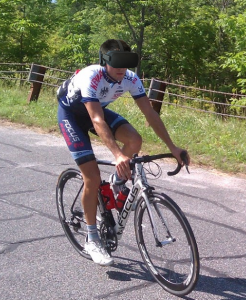 Along with riders who have already completed the course, the app also uses proprietary predictive analytics technology, powered by machine learning, to forecast the position of other riders who have not yet ridden the course that day. For each rider in the series, the app analyzes past results and assesses current fitness level, along with data from wearable activity trackers, to predict the rider’s position, and places a “ghost” avatar on the display alongside the other riders displayed.

The NCC’s Digital Outreach Director, Bikel Mello, recently took a demo unit for a spin on the time trial course in Hatfield, and recorded a demo video. “The technology is amazing,” Mello says. “It’s an incredibly lifelike experience, and it really helps to relieve the boredom and tedium of riding outdoors.”

The new app is available in the Oculus Store, and supports the Oculus Rift, Rift BS, Quest, and Quest BS headset models. Development is also underway for other headset units, with support expected by summer for Google Glass, and later in the year for the Apple Newton. 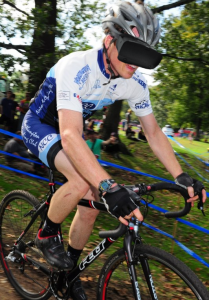 The NCC has purchased two Rift headsets, which are available to club members to borrow at Northampton Bicycle on a first-come, first-served basis. A sign-up form is available here. The NCC has also arranged a discount code for users without Oculus headsets, for 30% off the price of any supported headset. Orders placed before 11 PM on April 1 are guaranteed delivery before the first time trial in the Tuesday series on April 6.