Winter did indeed arrive on Friday night with mixed precipitation and around one inch of snow in most parts of the valley. I was not planning on riding based on the forecast, but when I woke up Saturday morning, things looked promising. The sun was shining, and the roads were just wet, with a temperature hovering around freezing. We decided to push up the start time one hour to allow for some drying of the pavement.

It was just a tiny crew that showed up at the Academy- Rich F., Roberto, and myself. It was a toasty 32°F.

I had planned a route taking us into Southampton to catch some dirt around the White Reservoir, and even though Rich had a road bike, we decided to proceed with the plan.

We headed up Rte. 66, for a bit, turning off onto Glendale Rd (the start of the Westhampton Hill Climb), and headed into Easthampton, and eventually into Southampton, turning off on Cold Spring Rd.

Instead of climbing back up into Westhampton, we turned west off onto Laurel Hill Rd, which turned into our first dirt road of the day, and was a beautiful, quiet climb.

Laurel led us out to Fomer Rd, around the southern tip of the White Reservoir, and then the northern tip of the Tighe Carmondy Reservoir. It must be noted at this point that the roads were still dirt, and some parts fully covered in snow with just a few car tire tracks. Add to that, some curvy descents. Sounds fine for a cycle-cross bike, but what if you are on a road bike with 23’s? Huge kudos go to Rich here, as he never got off the bike, nor did he take a spill the entire route. I know that I would have walked down some sections if I had my road bike! What an amazing display of confidence and skill in those conditions!

Dirt eventually turned to pavement as we made our way out to Crooked Ledge and Maple St, thus completing a 3/4 loop around Pomeroy Mountain.

Still with more dirt roads up my sleeve, we made our way over to Brickyard Rd, which passes by the southern tip of Manhan Meadow (still in Southampton), then went on to climb a short span up Moose Brook Rd.

After a bit more pavement, we climbed one of my favorite (and close-to home) dirt segments: Mountain Rd/Line Rd, which features a steep 10% climb, sharp curves and two town-lines, and a beautiful view, all in under one mile.

Back on pavement for a while, we passed by the west side of the Mt.Tom State reservation and enjoyed (?) a cooling fast descent down Rte 141.

Finally, we made our way back to Northampton on a flat dirt section by way of Old Springfield Rd- in between the Oxbow and Arcadia Wildlife Sanctuary, where we found the bridge blocked off (but passable on bikes) over the Mill River. A winter SMR never seems to be complete without a gate or barrier! Roberto and I attempted to get PR’s on the classic washboard stretch, but it was just too cold.

Passing back by the Academy downtown, I had 33.9 miles with around 2156 feet of climbing. What started with a doubtful riding condition day turned out to be absolutely beautiful with the newly fallen snow in the woods. 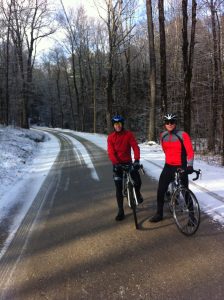 Tim and Rich and the better part of the road 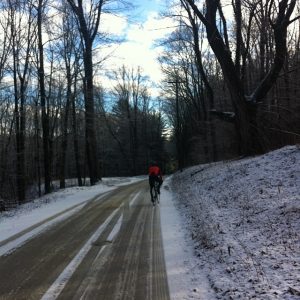 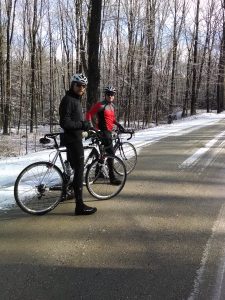 Just a reminder: keep checking the discussion boards this month for Saturday rides. Like today, there could be last-minute calls.