With the temperature below 15° this morning, we are calling an audible and relocating the SMR to the other side of the river, where Roberto has graciously offered us a firepit in his backyard in Amherst to warm us up a bit between laps around the improvised CX course through his neighborhood.

Bring your cross bike, and meet at the Station Road parking lot on the Norwottuck Rail Trail (http://goo.gl/maps/AcMPX) at 10:45 AM.

Cold weather this morning, combined with Roberto’s offer to use his backyard and its firepit as our base of operations, prompted a last-minute change of venue for the SMR today. Tim swung by the Academy in his SUV at 10AM and picked up Ellen, and we converged on Roberto’s house around 11AM to explore the fabulous network of off-road riding that he has been mapping out in South Amherst over the last month or so.

We started out on Town of Amherst conservation land at Wentworth Farms, just off of Stanley Street. This is mostly bumpy grass riding around the perimeters of several large cornfields, with a couple short wooded connecting sections. The cornfield riding is a ton of fun, as you can go pretty fast, but you still need to pay attention to your line, and navigate quite a few abrupt up-and-down passages across small swales and ditches. With rain from a couple of days ago, and temperatures well below freezing, conditions were pretty icy, with slightly slick frost everywhere, and very slick ice covering the numerous puddles and ditches. There are also a couple of bridge crossings, including a very challenging one over the Fort River involving a river traverse across a narrow plank, followed by an icy trudge up to the high wooden bridge across the river.

The Norwottuck Rail Trail serves as the spine that connects the various segments of this ride together. We headed a bit north on the trail to the second major section of the ride, a mile-long loop through open fields on Amherst College conservation lands just south of the rail trail, between South East St and Rt 116. This is an awesome loop, through open fields with spectacular views, and pretty significant elevation changes. It’s all bumpy grass, but the short fast descents, the frost, the ice and the mud combined to make it a very challenging lap. We ended up doing this section twice, in each direction, and it ended up being the highlight of my day.

From there we headed across to the rail trail to the northernmost segment of the ride, stringing together a bunch of sections from Peter’s practice CX course south of Amherst college. This has a variety of terrain, including smooth grass on the edges of the athletic fields, jeep trails through the woods, and a bit of rooty singletrack.

We had only gone about 15 miles, but it felt like 50, and the cold was starting to settle in. Roberto quickly dealt with the cold by firing up the firepit in his backyard and opening up a few beers. The firepit threw off some serious heat, and hot pumpkin soup, the fresh-backed focaccia, and the sausages hot off the grill refreshed our energy levels in no time (well, in an hour or so).

Ellen had to take off, and we were joined by John T as we saddled up to head out for another round. We basically did a repeat of the first 15-mile lap, with a few sections switched up for good measure. By this time the sun had melted the frost, even though temperatures were still well below freezing, so we moved a bit faster, but there was still quite a lot of ice, and more mud than we had seen earlier.

By the time we finished the final lap, the sun was approaching the horizon in the west, making this the first SMR I’ve done that actually made it all the way to dusk. I ended up with 32 miles at 10.7 mph, with 2,100′ of climbing, but my legs are telling me that it felt more like 75 miles. Mille grazie to Roberto and his wife for their fabulous hospitality, and for sharing the great trails in their neighborhood.

Map and pics below, but first note that with winter weather getting closer and closer, the Saturday rides each week will be very much dependent on the weather. The general plan is to ride as long as we can until we get significant snow cover, at which point riding becomes dangerous when temps are below freezing, and a sloppy mess if above freezing. Saturday rides will be dependent on each week’s weather, so it’s a good idea to check this message board for the post for each week’s ride on Thursday or Friday, and then again before heading out on Saturday if conditions are questionable. 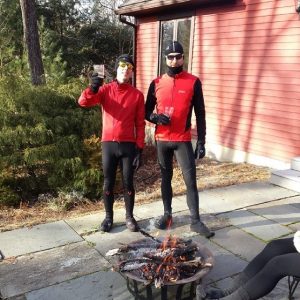 Tim and Roberto at the firepit 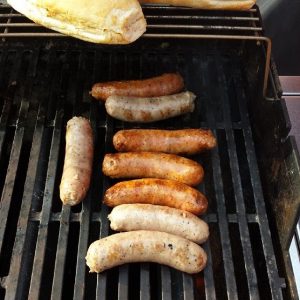 Sausages on the grill. Yes, there were bikes involved in this day, be patient… 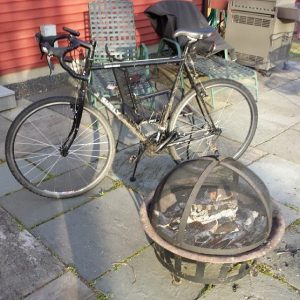 See? Here’s a bike, thawing by the firepit. 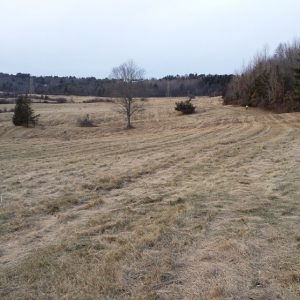 John T, approaching in the distance… 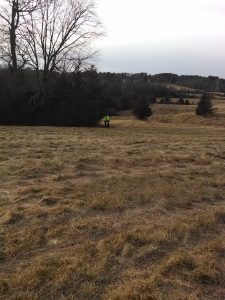 Getting a bit closer…

… and finally arriving. These are all on the Amherst College conservation land south of the rail trail.

I had a ton of fun today. It is so amazing what we have so close to home. Perfect type of riding for a day like today, and a spectacular course to get some great cross practice in.

Once again, many thanks to Roberto and his wife for the hospitality.

Some images I captured: 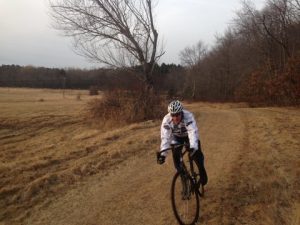 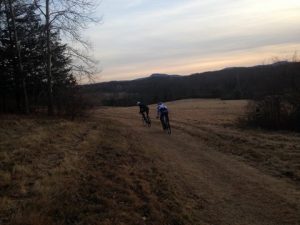 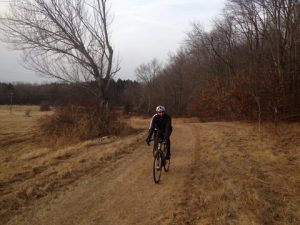 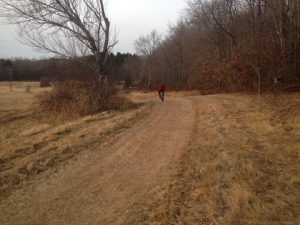 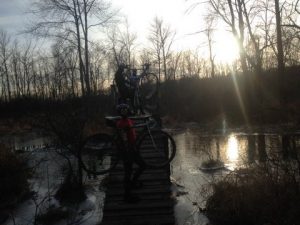 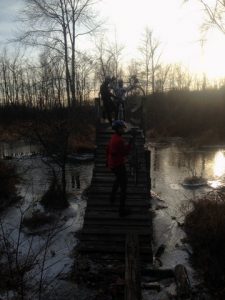 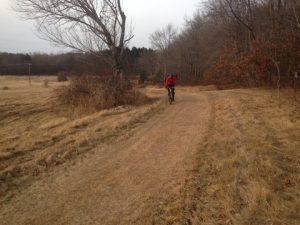 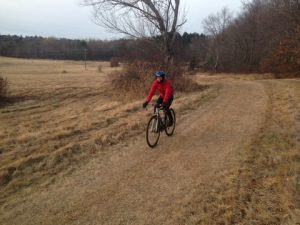 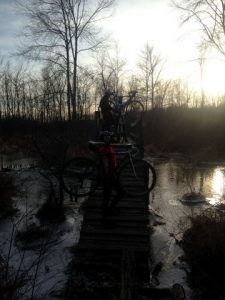 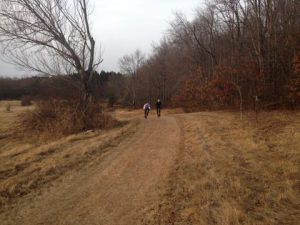 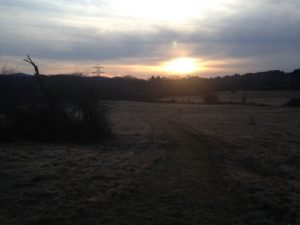 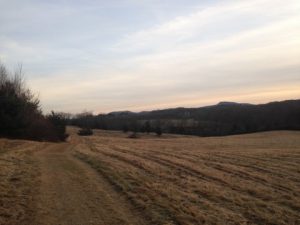 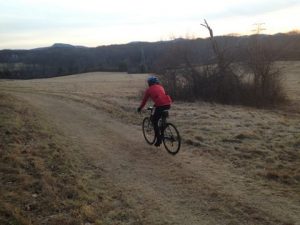 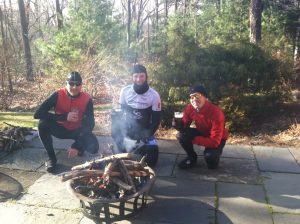 Finally, just in case you skipped to the sausage and fire pit photos, I’ll repeat what Jonathan said about Saturday rides going forward this winter: check the club forum/calendar. We’ll post if we plan to do an organized ride, but be sure to check the morning of, just in case weather changes. I like to get out and ride as long as the conditions are safe.

Thank you all folks for throwing the standard SMR plans up in the air at the last minute and quickly rearranging the day between 8:45 and 9 am. It was fun having you all – Ellen, John, Tim and Jonathan – on my home turf and play on the trails. Though they are in my own backyard it is so much more fun to ride them good company. Consider this a test. Next time we’ll get better organized and with plenty of notice so to have a bigger group to join in.
Jonathan, thanks for the day’s recap: it made me enjoy the ride and the good time twice.