We continue to get lucky with the weather for our Saturday rides, with temperatures today in the upper 30s and lower 40s under sunny skies. We set out with a group of 10, again sticking to the flatter (and warmer) roads closer to the river.

Tim chose the route this week, sending us up through Williamsburg and on to Whately, and then up into Deerfield on Stillwater Road. We crossed the Stillwater Bridge and hit the sharp little climb on Upper Road, with Roberto and Frank attacking off the front. Tim and I eventually chased them down, leading to a fast run up to Wisdom Way.

We cut through downtown Greenfield and made the short climb to the parking lot at the base of the Poet’s Seat tower, and then the slightly longer climb up the potholed driveway leading up the tower itself. Neal, Tim, and Roberto led the way up this one.

After enjoying the view for a few brisk and windy minutes, we headed back down, and turned south, with the northwest wind now mostly at our backs instead of in our faces. The ride down River Road turned into a fast-paced time trial, with the group breaking up into several packs.

Tim planned the one significant climb of the day to fall here, near the end of the ride, where it hurt the most. We turned on 116 and headed up Sugarloaf, after first scrambling through the closed (and not-quite-wide-enough-for-a-bike) gate at the bottom. The climb was as steep as ever, and we were pretty tired, but that didn’t stop Roberto, Tim, and Neal from battling it out at the front of the pack. I was a bit further back and didn’t see who got to the top first, but I think it was Tim or Roberto.

The summit was surprisingly wind-free and almost felt warm after the exertion of the climb, but the wind and the cold made themselves felt again as we descended. We ended the ride with a nice cohesive paceline down River Road back into Northampton, arriving around 1:30 PM. At the point where I split off, I had 50 miles at 18.1 mph, with about 3,100′ of climbing.

Did you mean fail? Because I could go either way with that. 😀 Roberto and I were pretty much wheel and wheel, but he got the sugar part of the loaf.

Good to be out there with all of you- and great teamwork in the paceline coming back home.

Here’s a few photos I was able to catch as you were just ending the suffer-fest. 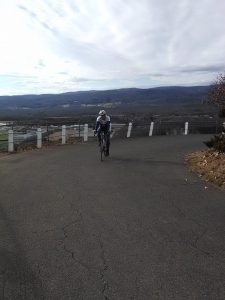 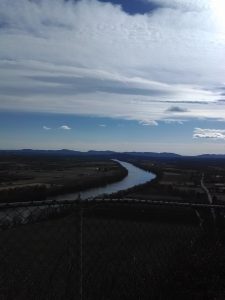 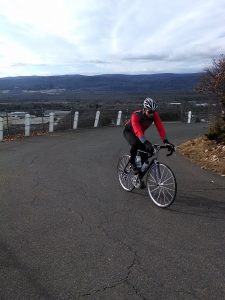 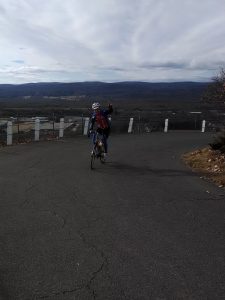 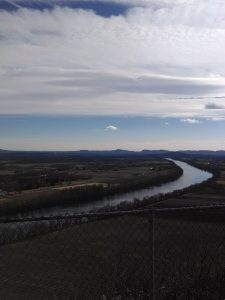 Thanks for the photos, Tim. Frank appears to be the only one who is happy.

And I’ve gotta say, the way you captured the clouds in these shots is just outstanding.

thanks for the photos and a good route for a colder day like this.

Yes – Jonathan – I was so happy it was over that’s why I smiled.

I felt pretty strong for the most part of the ride and maybe pushed the pedal too much. On River RD my legs just felt like a pair of frozen poles about 2 miles before the “finish line” crossing I 91. What a shame..
I think I underestimated a)the effort of the day – probably more a “4 banana ride” than a 3 banana ride; b) the low temperatures. Good training and good riding with you guys.