About a dozen riders arrived at the Academy under partly cloudy skies and a temperature around 60°F for our last official Super Sized SMR of the season. The plan was to ride up to North Adams to check out the Greylock Hill Climb Time Trial course, which takes place in September.

We headed out of town on the reverse Thursday Night route (North Farms, Webber, Conway Rds), and had our first quick re-group at the intersection of 116. We then had another quick rest shortly after that when someone flatted on the descent down Shelburne Falls Rd.

Arriving at McCusker’s, the group split- half choosing to head back to Northampton for a shorter day, and the other half continuing on toward the Mohawk Trail.

We pedaled on the very scenic & flat Mohawk Trail for another eight miles to the center of Charlemont where we stopped for food and fuel. This was one of those hidden country stores that has pretty much anything you need- and I am not just referring to food! The difficult part is actually finding the store!

After loading up on the calories, we began the first of several major efforts of the day. A 14 mile climb through the Mohawk Trail State Forrest, and up to and through Florida. I consider this one of the most beautiful climbs in Western Massachusetts. It passes between the Deerfield river and steep cliffs for a good portion. Much of this section of roadway was washed out by hurricane Irene in 2011, and the road remained closed for six months. The power of water is quite evident by the stunning views in this area. As we climbed higher and higher, we were rewarded with better and better views to the east.

After regrouping, a refreshing descent into North Adams was welcome, including the famous hair-pin turn on the way down. But, apparently Greylock is not large enough, as we ended up doing a bit of downtown touring before finding the entrance to Heritage State Park (the north access to Greylock).

And the big(gest) climb began. We passed several cyclists on their way back down, including a few groups that cheered us on. And we kept climbing, and climbing. Roberto and I tied for first up.

It was a clear sunny day at the summit, but there was a breeze, and the temperature was hovering around the 63° mark, making it cold in a wet jersey. We took a bit of time to enjoy a bite to eat from the cafe and fill our bottles again.

After a cool (both in temperature and fun factor) descent back down the north side of Greylock, made a quick stop for liquids and road food (since at the summit they don’t have such). After rolling out onto Rte 8 heading into Adams Jonathan spotted the cross street that took us off the main drag and put us on to a very scenic, gentle climb. This road I had suggested (Henry Wood), is one that Don Frank uses on his Greylock rides, but the other way around. It bypasses downtown Adams and provides awesome views of Greylock on one side, and Savoy Mountain on the other.

Once we were back out on to Rte 116, it was just the long and boring climb up through Savoy and Plainfield. Once that was overwith, we turned off on Cummington Road- a road Jonathan found that cuts over to Rte 9, and takes out a bit of slogging up 116. This turned out to be another beautiful find. It had some climbing, but also a good number of town lines to race (and, yes, we did).

Back out on Rte 9, it seemd like the home stretch, but the last little climb into Goshen was plenty of work. A final water and fuel stop in the center of Goshen was followed by a nice long, and well earned descent back into town.

The temperature all day remained in the 70’s comfortable range, and despite views of threatening cloud cover here and there, we escaped any showers.

Because I lapped for the climb, I don’t have statistics for Northampton to Northampton, but for me, Easthampton and back I had a total of 128 miles with 9364 feet of climbing.

Here’s some photos, taken by Jonathan and myself. 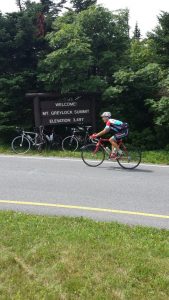 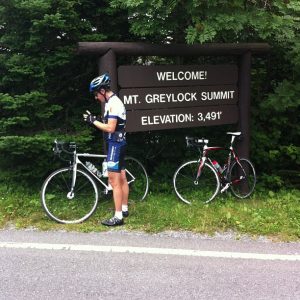 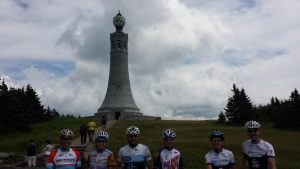 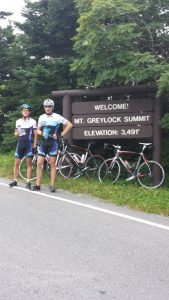 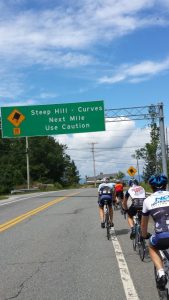 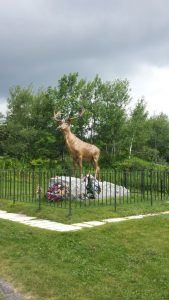 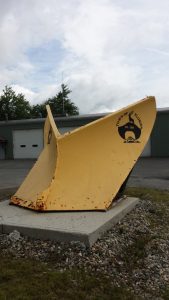 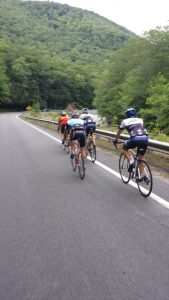 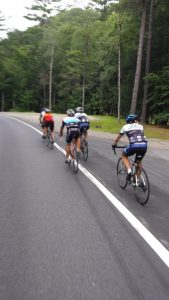 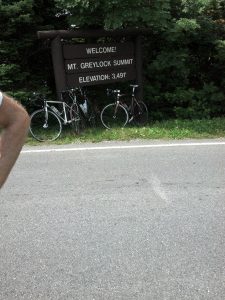 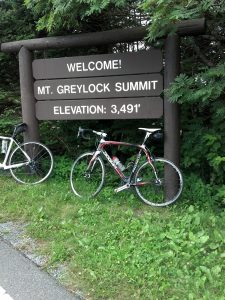 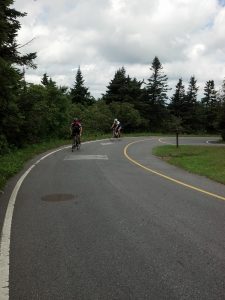 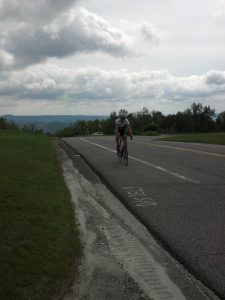 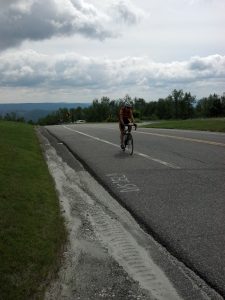 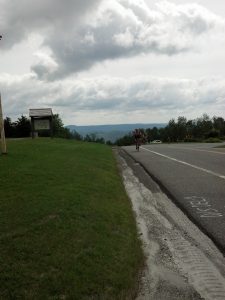