This past weekend I had a chance to do a ride I’ve always wanted to do – a lap on the Tour de France finishing route on the Champs-Élysées. Sadly, Lance and Alberto couldn’t make it, and I had to do it on a hulking city/commuter bike, but it was a blast nonetheless.

Paris has been operating Velib, a robust municipal bike-sharing/rental program, for about three years. The system includes about 17,000 bikes in 1,200 stations throughout the city, and is the largest program of its kind in the world. The program is obviously geared toward local residents and commuters, but it is easily accessible for visitors as well. The system is widely used – we saw lots of bikes all week, even in snowy and wet conditions, and probably over 50% were Velibs. After seeing the bikes around the city all week, I decided to take one for a spin on Sunday morning.

The system is easy to use, with detailed English-language instructions on every screen. Visitors can purchase a one-day pass for 1€, or a week-long pass for 5€. This pass gives unlimited access to the system for the specified period. Each rental within the period costs a euro or two, with rentals under a half-hour being free. You do need a credit card to sign up (they hit your card with a deposit in case you don’t return the bike), and apparently the only American card that works is American Express.

The bikes have a welded steel step-through frame, a three-speed internally-geared rear hub, and a generator hub on the front for the built-in front and rear lights. The drivetrain is almost fully enclosed, and the bikes feature big plastic fenders, an adjustable seatpost with a big soft saddle, a basket, and a bell. All this adds up, and the bike weighs approximately a ton. 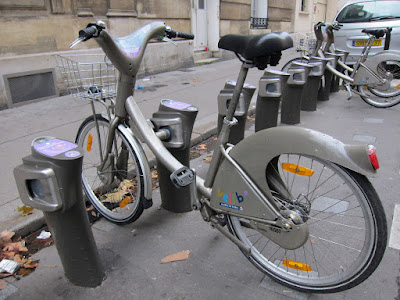 I initially had trouble getting a bike, finding a couple of empty stations and then getting stuck with a bike with mechanical difficulties. I finally found a working bike, and headed for the Champs. I entered the course just past the finish line at the lower portion of the Champs. Even though it was fairly early on Sunday morning, there is still a lot of traffic on the road, and I was dodging parked and parking cars all the way up and down this portion of the route.

From the finish line, the Champs climbs steadily toward the Arc de Triomphe on a grade of maybe one or two percent. The grade is gentle, but definitely noticable – you don’t see this on TV, because the overall speeds are so high, but there is a really significant difference in speed between this uphill section and the corresponding descent after making the turn at the Arc.

Also noticeable in this section (and throughout the Champs) was the road surface, which you also can’t see well on TV, because it’s just a blur under the wheels of the speeding bikes. The entire upper portion of the Champs, from the Place de la Concorde all the way up to the Arc and back, is paved with cobblestones in an arcing circular pattern. In some sections (like the bottom of the picture below), the stones have become cemented together into a fairly smooth surface, but the conditions in the middle and lower-left corner of the photo are more typical, with fairly large gaps between the cobbles. 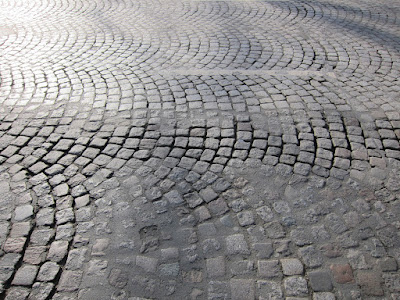 I had no problem navigating this surface with the fat tires of my urban assault vehicle, but with skinny tires on a road bike at race speeds, this would be a lot more challenging. I also had a good view of the smoothly-paved gutter on the very edge of the road. This is about a foot wide, and paved with smooth granite slabs, providing a much better surface than the remaining portion of the road. You often see a single line of riders on the right side of the pack taking advantage of the better conditions on this margin. I tried it briefly, but it’s tough – the margin is quite narrow, and there’s a high curb waiting to clip your right foot at the bottom of the pedal stroke, so you can really only use a couple inches along the left-hand edge of the gutter. Seeing the pros do this effortlessly under race conditions is pretty impressive (but of course, they don’t have to deal with parked cars like I had to 🙂 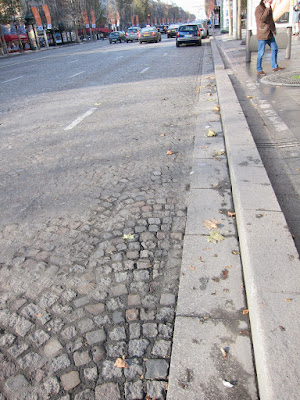 At the top of the Champs, traffic prevented me from making the left-hand 180° turn that the pros do, and I was unwilling to brave the six-lane, twelve-street traffic madhouse of a rotary around the Arc de Triomphe, so I took the ring road that provides a slightly wider circuit around the Arc, chugging slowly through eleven sets of traffic lights to make the circuit in about ten minutes.

Heading back down the Champs, I shifted into top gear and spun out pretty quickly – these bikes aren’t really built for descending. I sped down the street, enjoying a gorgeous view of the lower portion of the Champs and the Place de la Concorde backlit by the rising sun. At Concorde, the road swings right, and then left, around the perimeter of the square, providing the obligatory TV camera shot showing the top of the obelisk as the peloton streams through the square. I didn’t do much streaming, as I was fighting traffic, and had to resort to using the sidewalks and pedestrian crossings at one point to deal with the chaotic traffic.

The course runs along the edge of the Seine for about a half-mile before turning left to pass through the underpass below the Louvre courtyard. I thought briefly about braving the underpass, but it’s a very bike-hostile environment, with high-speed traffic, no shoulder, and an odd lane of oncoming traffic on the right emerging from an underground parking garage. Instead, I went off-road on the hard-packed cinders of the Louvre courtyard, and did a little circuit around the Arc du Carrousel and past the Louvre pyramid, pausing for a couple photos. 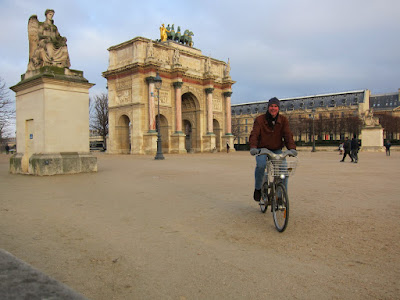 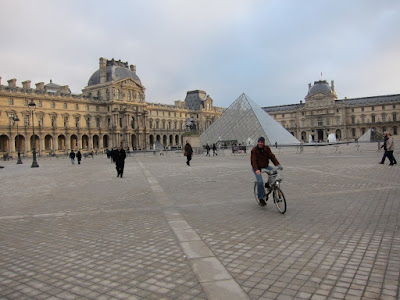 Back on the road on the Rue Rivoli, I saw several recreational riders, one on a road bike and a couple on cross bikes. I hung with one for a couple minutes, but got dropped pretty quickly as we accelerated away from a traffic light. At the end of the Rue Rivoli is another pass through the Place de la Concorde, with better traffic conditions on this side, and then the final right-hand turn onto the Champs toward the finish. I’m not sure where the finish line is exactly, but I picked a likely spot and broke into a sprint, drawing a few bemused glances from onlookers. I think Mark Cavendish might have edged me at the line, but I definitely beat the old lady on a rusty ten-speed carrying a baguette that I passed near the end.

Ride stats: 10.2 miles at 10.5 mph, 405 feet of climbing, which includes some sections outside the TdF lap. Total ride time for the lap (not including the circuit around the Arc at the top and the sightseeing at the Louvre at the bottom) was around 35 minutes (the peloton normally does this lap in well under ten minutes). 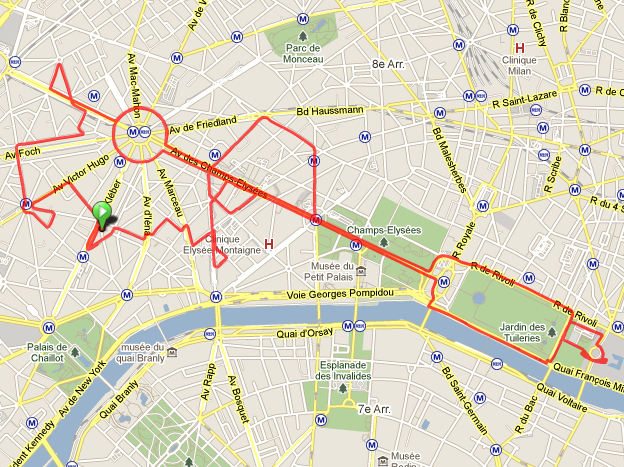 A few more shots of the Velib bikes: 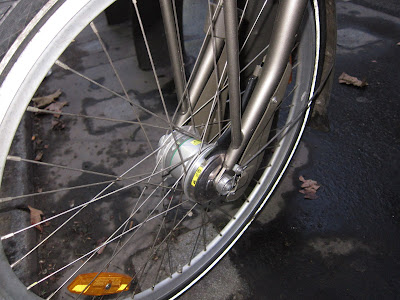 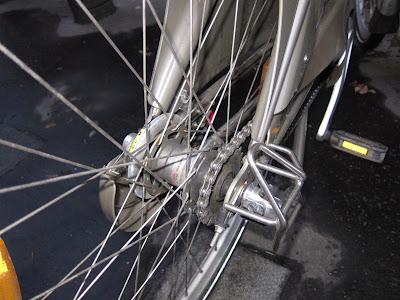 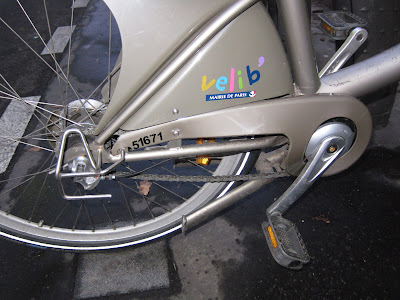 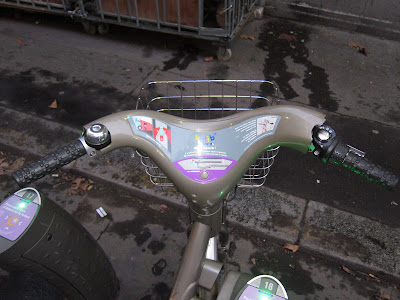 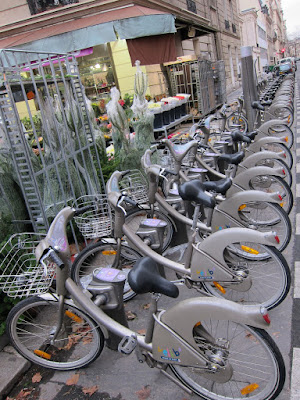 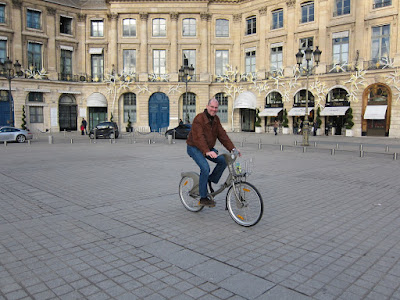 I grabbed another bike later in the day to take a spin around the Place Vendôme. The nice thing about the system is that once you have a pass, you can grab a bike anywhere in the city, use it for free for up to half an hour, and return it wherever you want.