A few weeks ago Aldo Tiboni told me that seeing a route from the opposite direction can completely transform a ride. That was the theme of today’s ride for me, as Paul chose a route highlighting the climb from Miller’s Falls into Wendell. I’ve enjoyed plenty of descents along this route, but have never done the climb, which was a blast. But I’m getting ahead of myself…

We started with a group of six – Paul, Chris, Joe, Roberto, Morgan and I. We were working with a fairly brisk wind out of the north-northwest, and temperatures close to freezing. We tossed around a bunch of routes, and eventually decided to head north along the river, cross the river in Greenfield, and climb to Wendell. We headed into the teeth of the wind for about an hour on River Road, south and then north of 116. Along the way, Roberto shattered the group with a surge up the “switchback” section just past the end of the TT route. We then picked up the (relatively) new bikepath at the train depot in Greenfield to cross the river. Roberto headed back to Amherst at this point, and the rest of us continued up the bikepath to its terminus in Turner’s Falls, and then struggled up the short steep hills connecting to Miller’s Falls Road.

We rolled into Miller’s Falls around noon, and persuaded Joe to continue on the long course with us rather than heading home. This was at the base of the aforementioned climb, which starts with an immediate long steep section, and then settles down to a half-dozen or so stair-steps, alternating lung-busting steep sections with false flats in between. Morgan put on an impressive effort, sticking to Paul’s wheel on the front of the pack for the first 1/3 of the climb. I was watching from the back, so I couldn’t see exactly what happened up front, but eventually Paul pulled away from Morgan, and Joe and Chris pulled away from me to challenge, but not quite catch, Paul. This is a terrific climb, on brand-new pavement, with lots of challenging grades and a few high-speed sections. Highly recommended. As I mentioned, I’ve done the descent several times, which is also lots of fun, but doing this as a climb really gave me a new perspective on the route. Thanks for the suggestion, Paul.

We stopped in Wendell to refuel, for perhaps a bit too long, because we were all totally frozen as we descended toward Lake Wyola and then further down toward Rt. 63/47. Things warmed up a bit once we passed the Bookmill and picked up the long-awaited tailwind. Joe outfoxed the pack with the old “my legs are cooked” excuse before sprinting to take the day’s sole contested town line as we crossed into Sunderland.

[Side note: Joe has to be the best group rider I’ve ridden with this year. Nobody else has his ability to pick out an upcoming car door, or left-turning driver, and to warn the group about it. Thanks, Joe!!]

The group split up once we hit the Sunderland Bridge, with Chris and I heading south/east on 116, while the rest of the group crossed the bridge toward River Rd. Chris pushed me hard on 116 back toward Amherst (despite the fact that he had an additional 10 miles or so to go back to Belchertown). 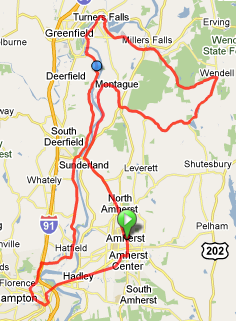