We’ve been lucky with the weather lately – another chilly but not-too-cold day saw a group of seven depart from the Academy – Clayton, Chris, Kevin, Paul, Ivan, Joe, and I. Amy showed up for the start, but got called away before we started the ride.

With brisk winds blowing mostly out of the west, we decided to start by heading into the wind up the Thursday Night Ride route through Williamsburg and up Ashfield Road. Joe and Ivan were time-constrained, and turned back in Williamsburg. The rest of us headed up the climb, staying straight instead of turning onto Main Poland Road. Clayton and Paul led the way up this long climb, with Clayton reaching the top first. Kevin and I brought up the rear, with Chris between us and the lead group.

A shorter climb up Creamery Road and a descent on Norton Hill Road brought us to 116, where we picked up the always-exciting descent on Baptist Corner Road. We flew down this rolling descent with the wind mostly at our backs, with Clayton alternately shooting off the front and falling way behind, with his bike making weird noises. We climbed up Shelburne Falls Road and took a brief scenic detour along the river on Reed’s Bridge Road to bring us back to 116.

The wind was picking up by this point, and swirling a lot, making for a dicey descent down 116 into South Deerfield. Along the way we passed Amy and Dawn climbing toward Conway, so now we know the important business at the start of the ride that pulled Amy away from riding with the rest of us 🙂

Kevin was on a deadline and split off at the Sunderland bridge, and the remaining four continued south on 116 toward Amherst. I almost bought it after hitting a piece of wood near the Amherst town line, with my life flashing before my eyes as I lost control and veered toward traffic at around 25mph. Somehow I managed to regain control and stay upright. I was kind of freaked after that and my appetite for going further was rather limited, so I split off and headed back into Amherst, with the rest of the group continuing south on 116.

Kevin later reported that the swirling winds ensured that he didn’t quite make it back to Southampton in time for his deadline, but that he somehow managed to secure familial absolution. Hope the remainder of everyone else’s rides went well. 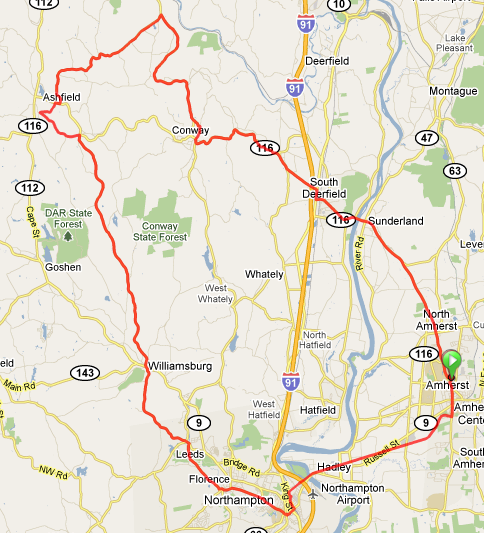